ORG Junior
News
“I am of the same “slow ship” style as my father.” Maxim Mayorov – about moving to Yaroslavl, national team debut and passion for tennis
“I bought a cake and gave flowers to my mom with my first paycheck.” Yaroslav Tsulygin – about his JHL debut with Tolpar
Was signed up for hockey at the age of three, was dressed as a goalie in an extreme situation and looks up to Datsyuk: take a closer look at the leader of Irbis and the hope of Ak Bars
Edgar Varagyan: “When we were on the plane, guys told me: “He is an enforcer, he would beat you up with no sweat.” I thought: things happen, he would beat me up and so what?”
“As time goes by, taking a flight to Sakhalin feels almost like being stuck in Moscow traffic.” Daniil Veremeichik – the JHL's Best Player on Social Media
“Working out in a gym is a type of rest for me.” Ivan Murashov had the best season of his career, dreams of playing in the KHL and has not eaten any fast food for two years
“Condensed milk is the only unhealthy food available for the national team.” Raul Yakupov – about the Black Sea Cup, the KHL debut and the season with Reaktor
“Four years in the JHL was a great time. Winning the Cup with Dynamo was the best moment.” Ivan Didkovsky about junior phase of his career
Share

Eight regular season games took place in Parimatch Junior Hockey League on November 6th. The gameday kicked off in Russia’s Far East. We take a look at Wednesday action in this review. 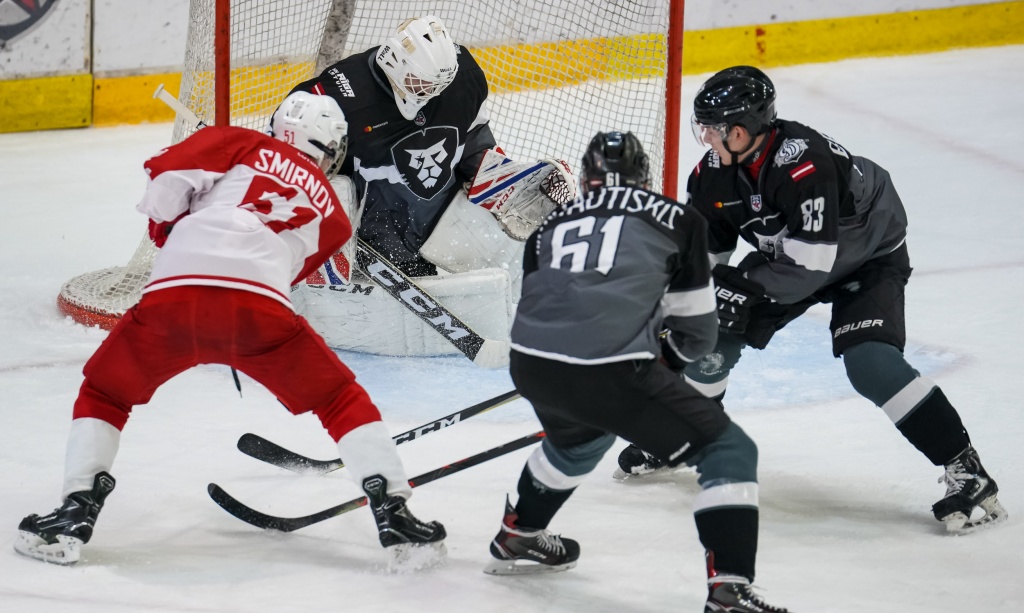 Last game of the day was held in Riga, Latvia. Russkie Vityazi challenged HK Riga. The teams put on quite a show the day before and exchanged goals in the opening period of the second game of the back-to-back series. Richards Grinbergs scored for the home side, while Moscow Region responded with a tally by Nikolai Smirnov. Same scenario happened in the second frame but it was the visitors who scored first – Semyon Dedimov found his target. Riga managed to bring it back to even with a shorthanded marker – Evgeny Pika scored on a transition play.

Russkie Vityazi dominated on a power play throughout the third period as they converted on three man advantages, securing the win on the road. Kirill Kondyrev scored twice, while Vyacheslav Sarayev chipped it a tally of his own. Russkie Vityazi’s power play unit steps into he spotlight as they win 5-2. 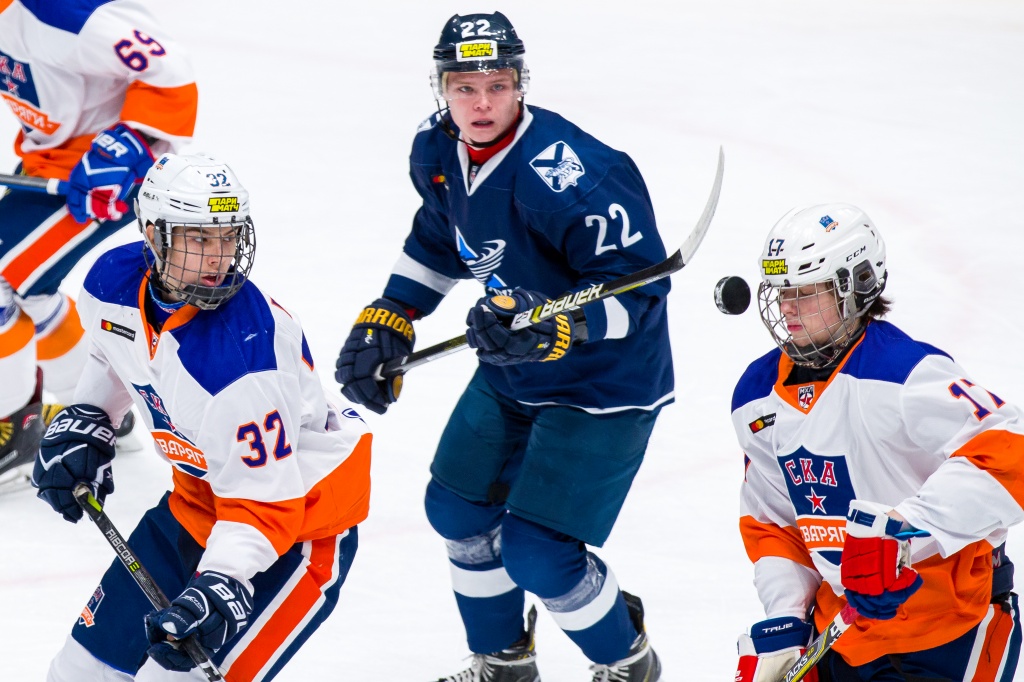 Taifun Primorie Region faced SKA-Varyagi St. Petersburg for the second consecutive time in Vladivostok. Home side won the day before but this time around they had to work even harder for it. ‘Army men’ learned their lesson from the first game and came out focused for the second part of the back-to-back series. SKA-Varyagi opened scoring 15 minutes in as Matvey Kabush sniped one home. Vladivostok had the momentum on their side in the second frame but they managed to solve Pavel Davydyuk only in the third.

Early in the period Ilya Ovechkin brought it back to even. Taifun failed to capitalized on a power play attempt but soon after that Ivan Lapshin put Primorie Region in the lead. The visitors called timeout and put the extra-attacker on the ice but it led only to an empty-netter – Alexei Drobin bagged it for Vladivostok. Taifun win 3-1 on home ice. 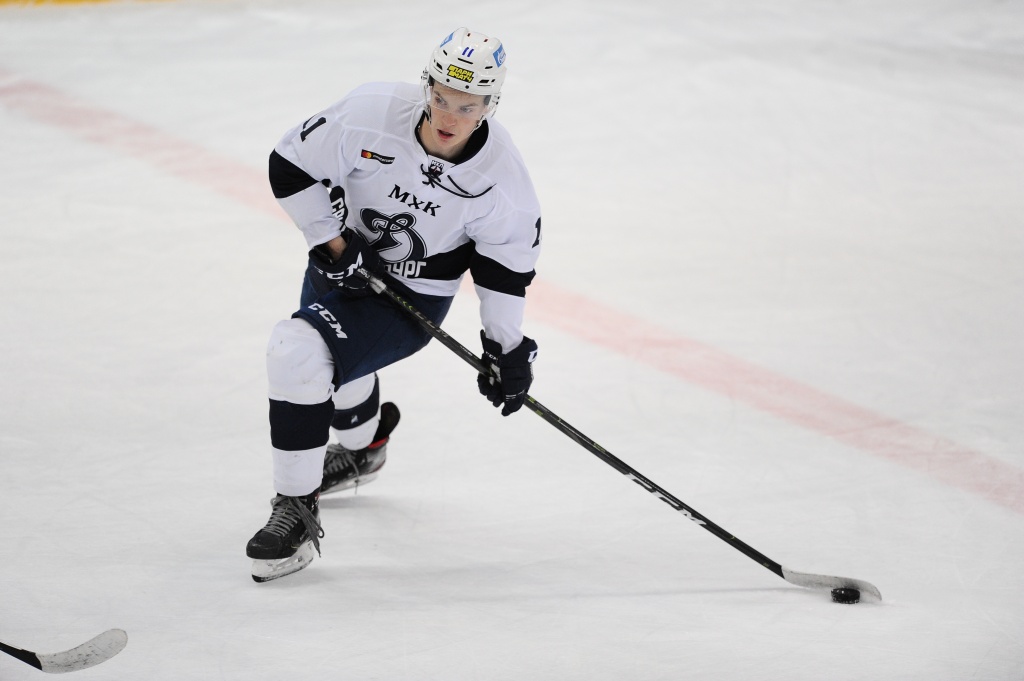 In the second game of the day Sakhalinskie Akuly once again played hosts to JHC Dynamo St. Petersburg. The visitors got a quick goal in this one – Gleb Shaborshin got it past Grigory Kolupayev just over a minute in. They doubled their lead late in the period as Dmitry Rashevsky found his target. That forced Sakhalinskie Akuly coaching staff to call timeout. Yuzhno-Sakhalinsk pulled back to within one in the second period. Game officials had to take a look at the replay but it proved that there was no goaltender interference on the play and Vladimir Krotov’s goal counted.

Dynamo improved their lead to three goals before the period expired – Semyon Zakharov got one of the markers, while Dmitry Rashevsky scored his second of the game. Kirill Kuzmenko got the nod for the third period for the ‘Sharks’. Home side didn’t allow another goal but failed to turn it around. Dynamo bounce back with this 4-1 win and leave Yuzhno-Sakhalinsk with three points. 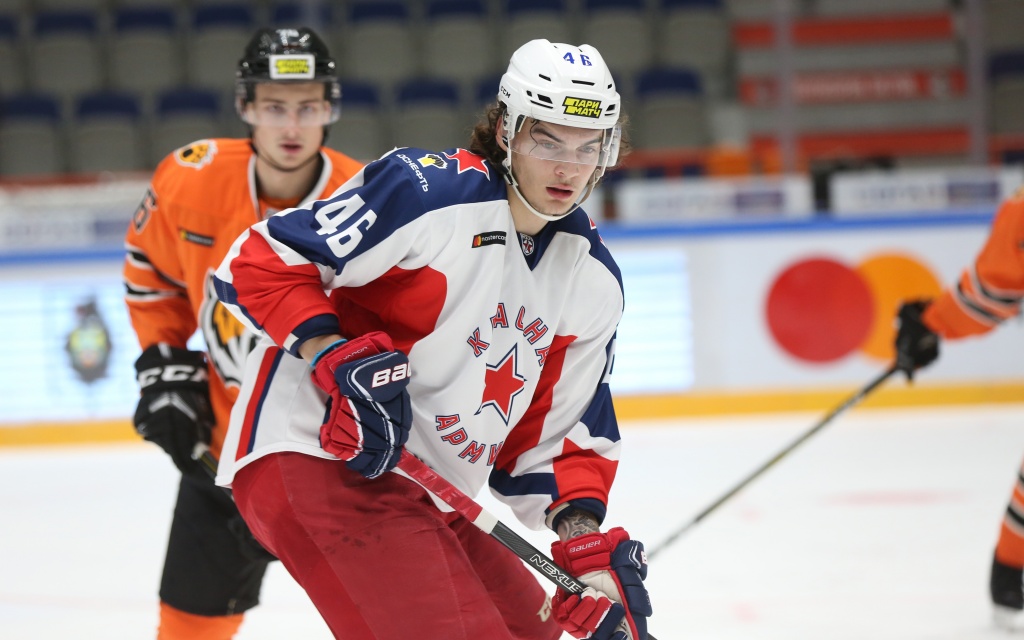 Amurskie Tigry Khabarovsk once again met Krasnaya Armiya Moscow. While the game was more or less close in the opening period, the experienced Moscow got on the board 12 minutes in – Yegor Kuzminov found his target. Early into the second period Gleb Nikitin got a minor for tripping and Khabarovsk had to pay for that right away – Pavel Koreshkov doubled the lead for Moscow. Roman Kalinichenko consequently improved the lead to 3-0.

After Artyom Pugachyov scored on a power play, Alexander Yevgrafov replaced Artyom Martynov in goal for Amurskie Tigry. Home side managed to eke out a consolation goal – Yegor Domnichev got the marker. Krasnaya Armiya win 4-1 and leave Khabarovsk with four points.


Tolpar soar past Ladiya in Togliatti 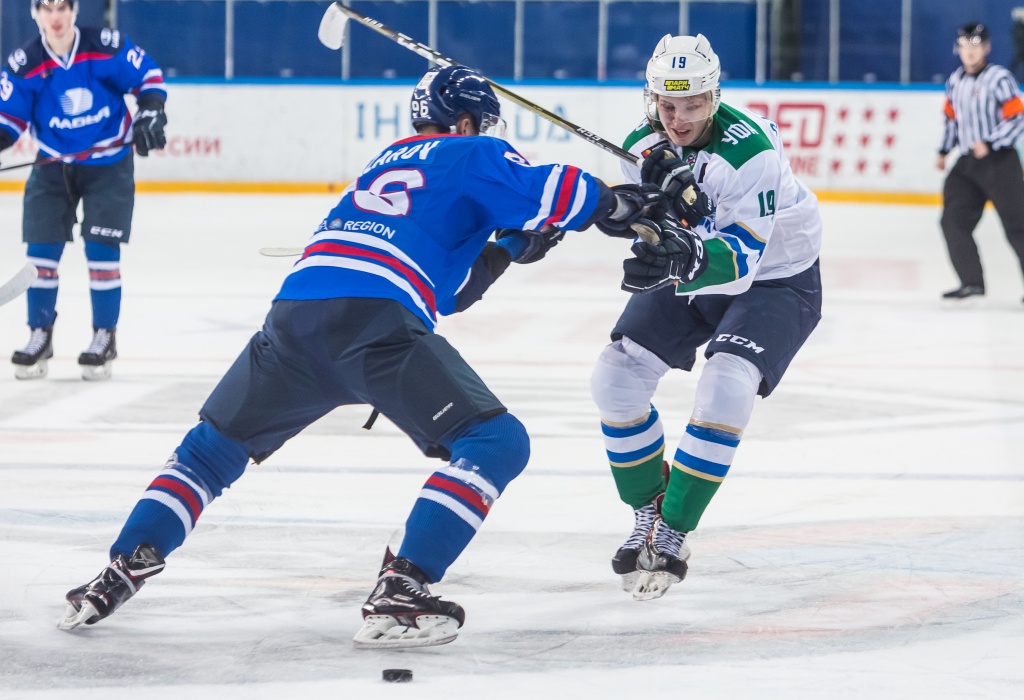 Tolpar Ufa have looked like a power to be reckoned with lately as the team buzzes around the top spot in the East. They took another step in that direction with a blowout win over Ladiya Togliatti. Home side allowed two goals just eight minutes into the game. Notably, Danil Aimurzin scored a shorthanded tally, while Alexander Pashin fired one home on a power play. With a few minutes remaining to play in the period Pashin scored his second of the game and then Ufa really took off in the second.

Tolpar went on to score three more goals on Ladiya. Four minutes into the second period Sergei Safin-Tregubov sniped it from a face-off circle, and shortly after that Denis Goryukhin and Timur Valeyev got a tally each past Artyom Zabrodin. The visitors calmed down after that, while all Togliatti could get in this one was a consolation goal by Stanislav Rangayev. Tolpar enjoy a blowout 6-1 win on the road. 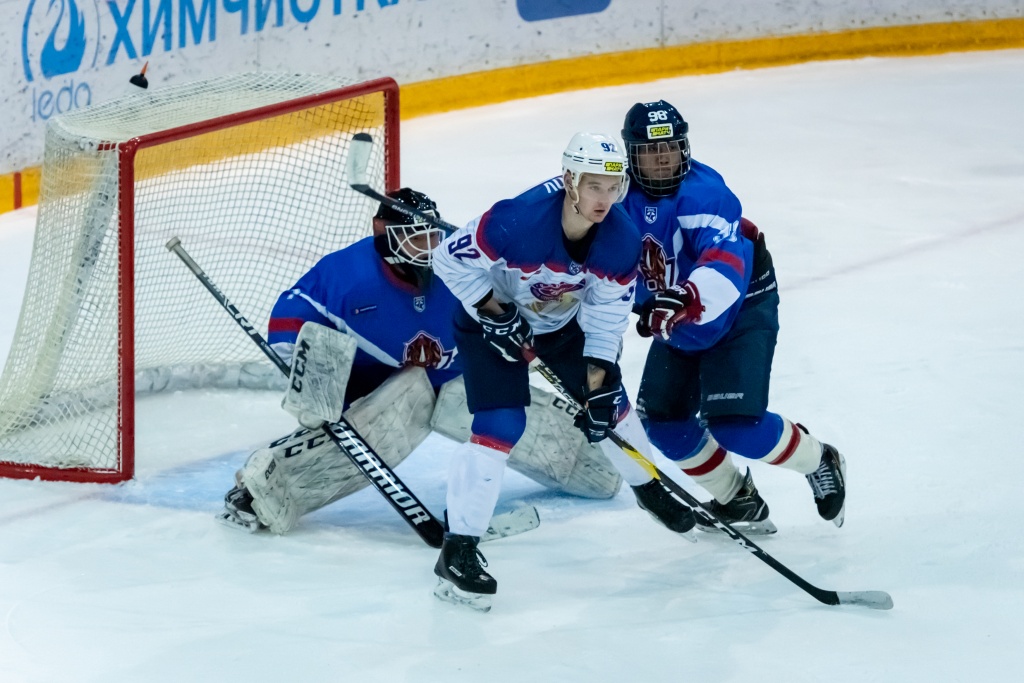 ORG Junior Beijing remain the only team this season without a single point. Chinese side lost another one to HC Kapitan Stupino. Kapitan put it away early as they scored three goals in the opening 15 minutes of play – Vadim Sivchuk, Alexei Rybin and Daniil Tyutchev got a tally each. Wang Jing got a goal back for the ‘Rhinos’ early in the second period but the visitors responded with markers by Grigory Ponkratov and Amir Garayev.

Stupino added two more goals to their lead in the third stanza. Tyutchev got his second of the game, while Dmitry Konstantinov set the final score. ORG Junior fall to Kapitan 7-1.

SKA-1946 lose their first game of the season 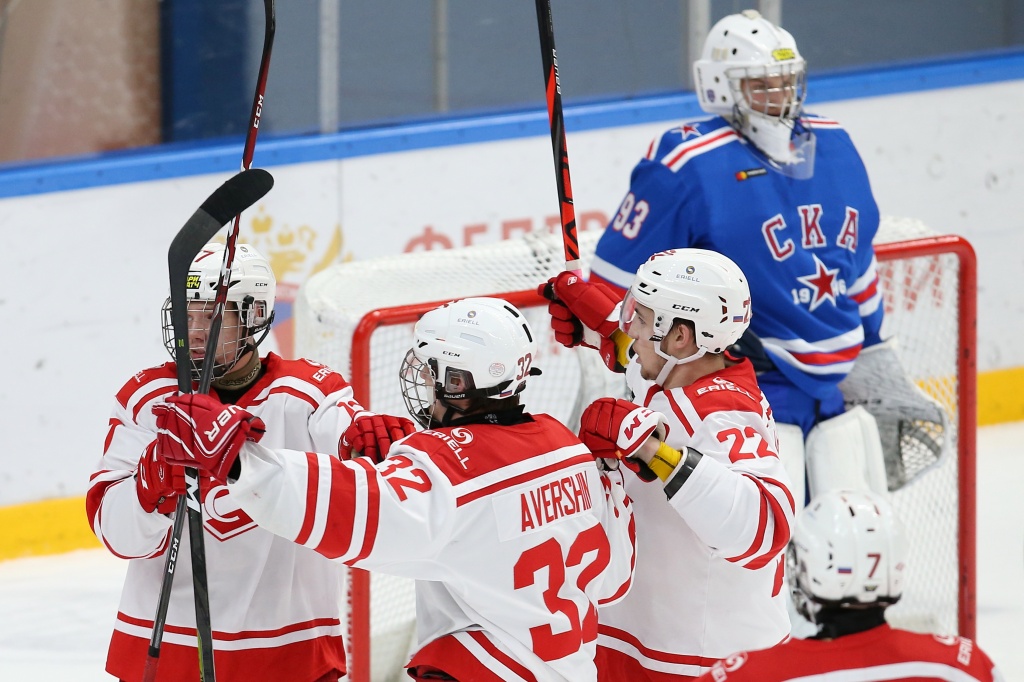 Undefeated SKA-1946 St. Petersburg defended the ice against JHC Spartak Moscow. The red-and-white really wanted to get their revenge for a blowout loss to the ‘army men’ in the first game of the season but home side quickly established a 2-0 lead as Artyom Zhuk and Dmitry Semykin found the back of the net. Spartak tied it up before the intermission. Kirill Tagirov converted on a power play, while Danil Avershin sniped one home with a long shot. Alexander Oskin put Spartak in the lead in the second period but Semykin got his second of the game to bring it back to even.

SKA-1946 got their second lead of the game late in the period – Maxim Krovyakov went for a pass and the puck deflected into the net off a defenseman’s skate. Ruslan Novruzov made it a 4-4 hockey game midway through the third stanza as he cashed in on his own rebound. The game went to overtime and three minutes into it the historic winning run of SKA-1946 came to an end. Anton Mishakov scored the winner and Spartak handed St. Petersburg their first loss of the year. 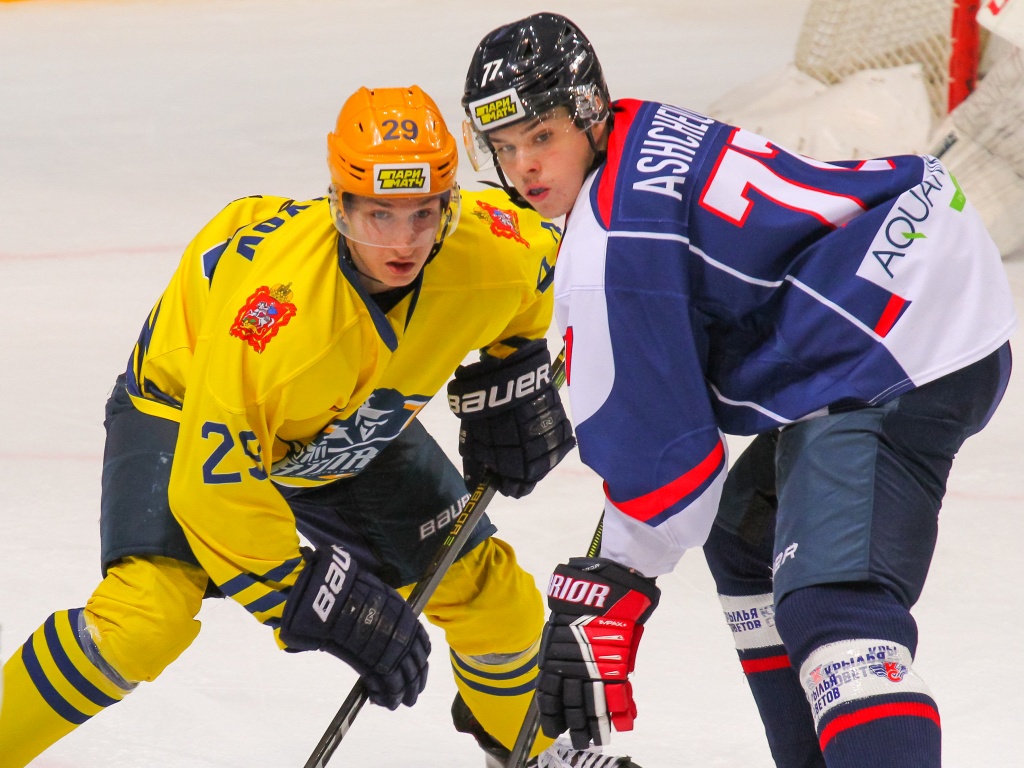 Krylia Sovetov Moscow faced Atlant Moscow Region in Setun. First goal of the game came eight minutes in – Igor Shmelyov got one past Denis Popov. ‘Soviet Wings’ had the momentum on their side but struggled with pulling the trigger. As for the second frame, Atlant began spending more time in the offensive territory and managed to improve their lead – Dmitry Zvyagintsev scored late in the period.

Krylia Sovetov got back in the game. Just 20 seconds past the start of the third stanza Vitaly Lebyodkin solved Platon Zadorozhny. Late in regulation Pavel Zubchinksy brought the fans to their feet and secured a point for Moscow. Overtimes solved nothing and Krylia Sovetov went on to prevail in the shootout – Damir Bilaylov scored the winner.