Eight regular season games took place in Parimatch Junior Hockey League on November 5th. It all began in Russia’s Far East. We take a look at Tuesday action in this review.

Shootout between Russkie Vityazi and Riga 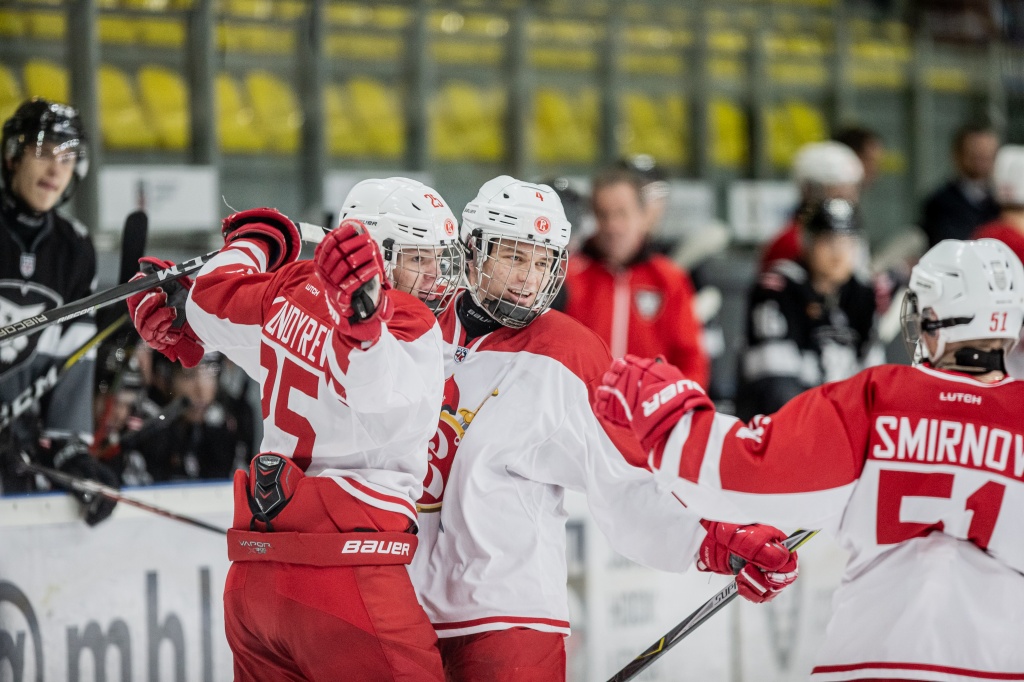 First period of play was stopped with six minutes on the clock – HK Riga forward Denis Fjodorovs, who was playing his 150th Junior Hockey League game, landed such a huge hit that it shattered the glass at Pinki arena. Although first period of action was cut by a few minutes, it still featured as many as six goals.

The visitors got on the board first. Just 90 seconds past the opening face-off Antons Trastasenkovs sent one past Timur Shiyanov. Russkie Vityazi responded midway through the period with a string of tallies. Moscow Region side scored three goals in one minute. Semyon Demidov brought it back to even, Kirill Kondyrev capitalized on a power play, making Riga pay for Janis Svanenbergs’ minor, and then Zakhar Bardakov improved the lead for Russkie Vityazi.

Raimons Vilkoits’ men pulled back to within one in a hurry. Antons Trastasenkovs got his second of the game shortly before the long pause and after the glass at Inbox Arena was replaced, Ernest Osenieks leveled it.

The visitors did better in the second frame. Dmitry Zaitsev converted on yet another power play attempt, while Ivan Zinchenko forced Riga coaching staff swap Janis Voris for Bruno Bruveris. Maxim Bets’ side ran into a penalty problem in the third stanza. Russkie Vityazi had to kill off three minors but they pulled through and carried their lead to the finish line.

Russkie Vityazi extend their winning streak to five games, robbing HK Riga from the opportunity to catch up to top teams of the West in the standings.


Taifun steamroll over SKA-Varyagi at home 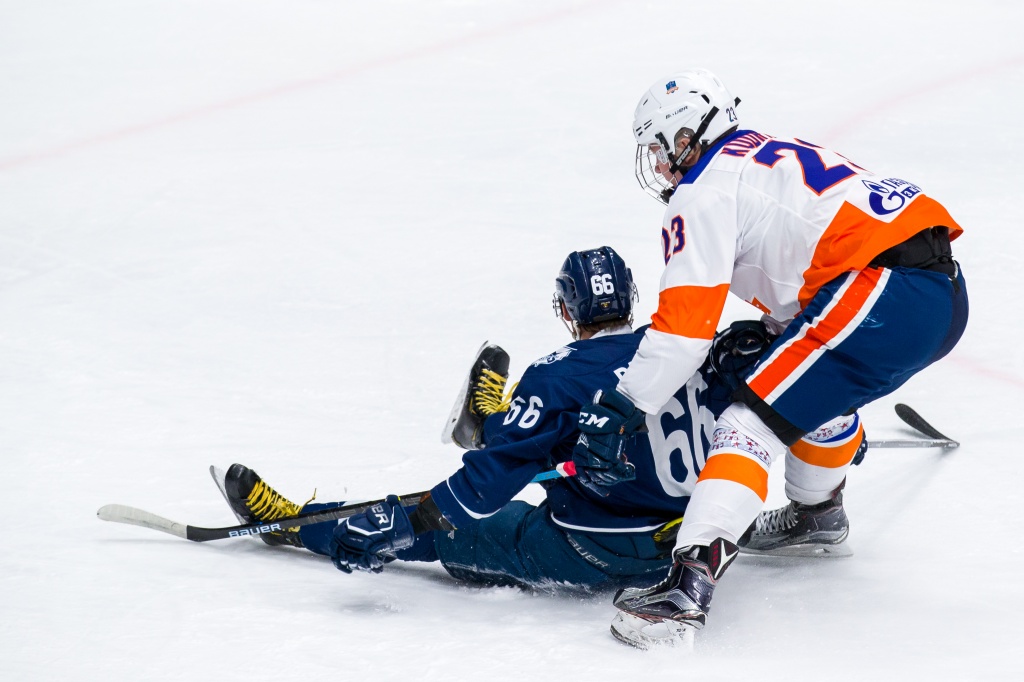 Taifun Primorie Region played hosts to SKA-Varyagi in Vladivostok and the tilt proved to be high-scoring. Goals were in abundance right from the beginning. In the opening six minutes of play Dmitry Kozlov and Leonid Pasmanik got a tally each, forcing St. Petersburg swap their goaltenders – Kirill Obyskalov relieved Evgeny Khvostov. SKA-Varyagi got a marker from Grigory Kuzmin but late in the period Alexei Drobin restored the 2-goal cushion.

Second period of action also brought four goals – Pavel Ponosov, Alexander Sychushkin and Nikita Malukhin scored for Taifun, while Ilya Kudryashov netted one for the visitors. Vladivostok finished strong as well – Sergei Shushkov got a tally of his own, while Ponosov scored his second of the game. A mass brawl took place late in regulation. The teams combined for 44 penalty minutes. 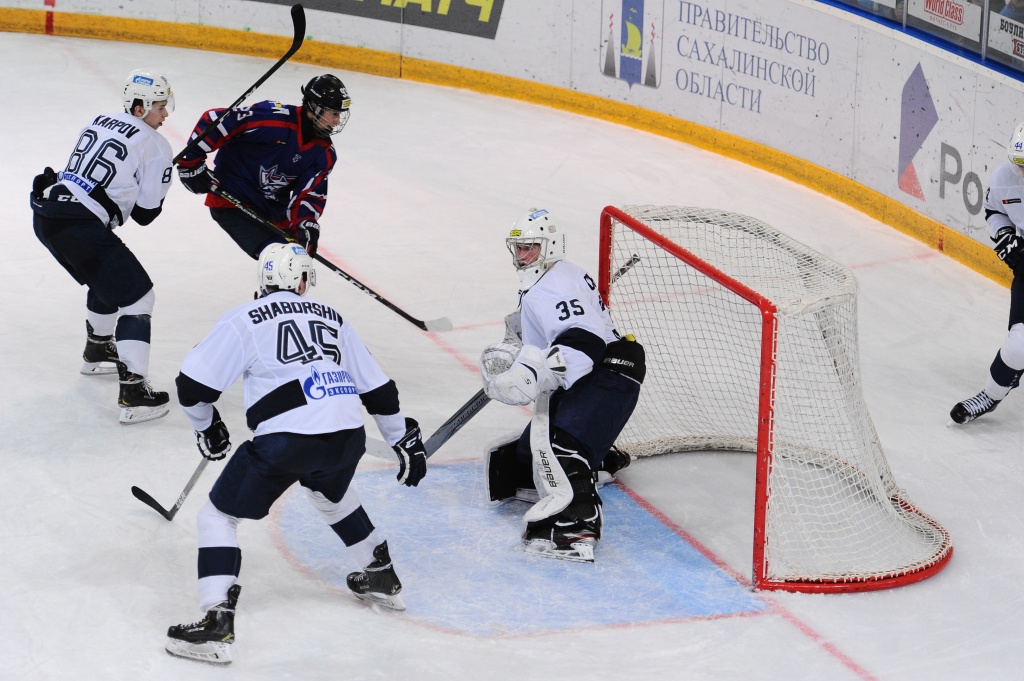 In the second game of the day Sakhalinskie Akuly faced JHC Dynamo St. Petersburg. After a close game in the opening period, first goal came only five minutes into the second – Pavel Kuznetsov sent one past Grigory Kolupayev. That didn’t faze Yuzhno-Sakhalinsk much.

Past the halfway mark of the period Yegor Kurilkin tied it up and early into the third stanza the ‘Sharks’ grabbed the lead as Stanislav Basnev sniped it home. Five minutes later Sakhalinskie Akuly found themselves down a man and Dynamo managed to capitalize on it – Semyon Zakaharov made it a 2-2 hockey game and sent it to overtime. With just 11 seconds on the clock Vadim Chebotaryov scored the winner for the ‘Sharks’. Sakhalinskie Akuly win 3-2, while Dynamo salvage a point. 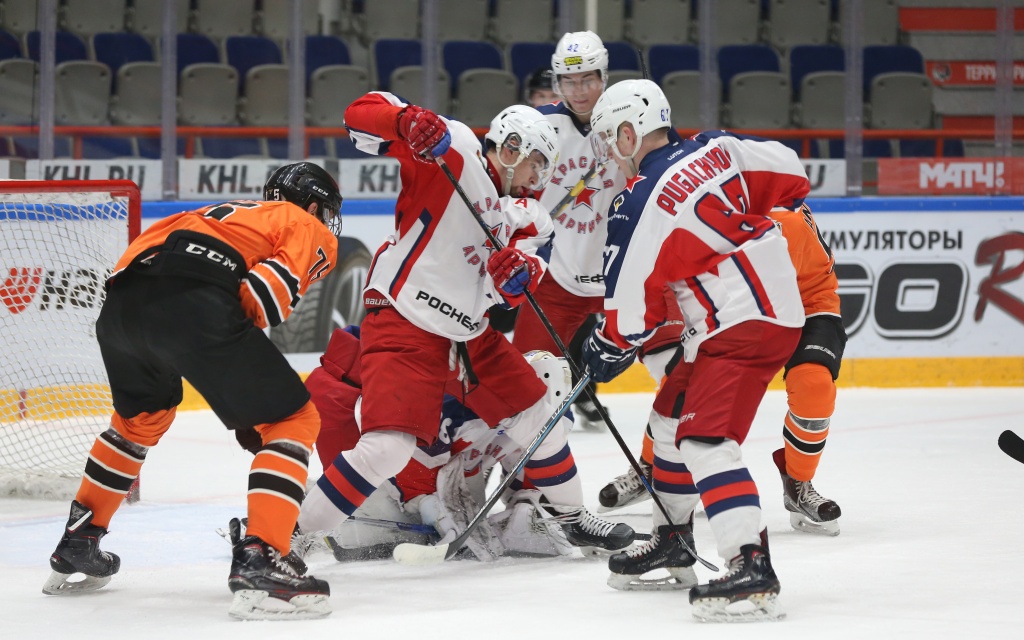 Amurskie Tigry Khabarovsk turned out to be the only Far Eastern team that lost this day. And they did it in blowout fashion. The mighty Krasnaya Armiya Moscow came to town and capitalized on their initial power play opportunity of the game – Daniil Anop found the back of the net. ‘Army men’ had the momentum on their side in the second period as well and converted it into a goal by Alexander Chyorny.

After the second intermission Krasnaya Armiya dominated on the ice. Alexander Shaposhnikov converted on yet another power play and then Yegor Korbit got an even strength marker to improve the lead to 4-0. Midway through the period Semyon Sidorov and Alexander Shaposhnikov dropped the gloves and then Sergei Shamshurin set the final score at 5-0. Matvey Kiselyov earned a shutout with 30 saves. 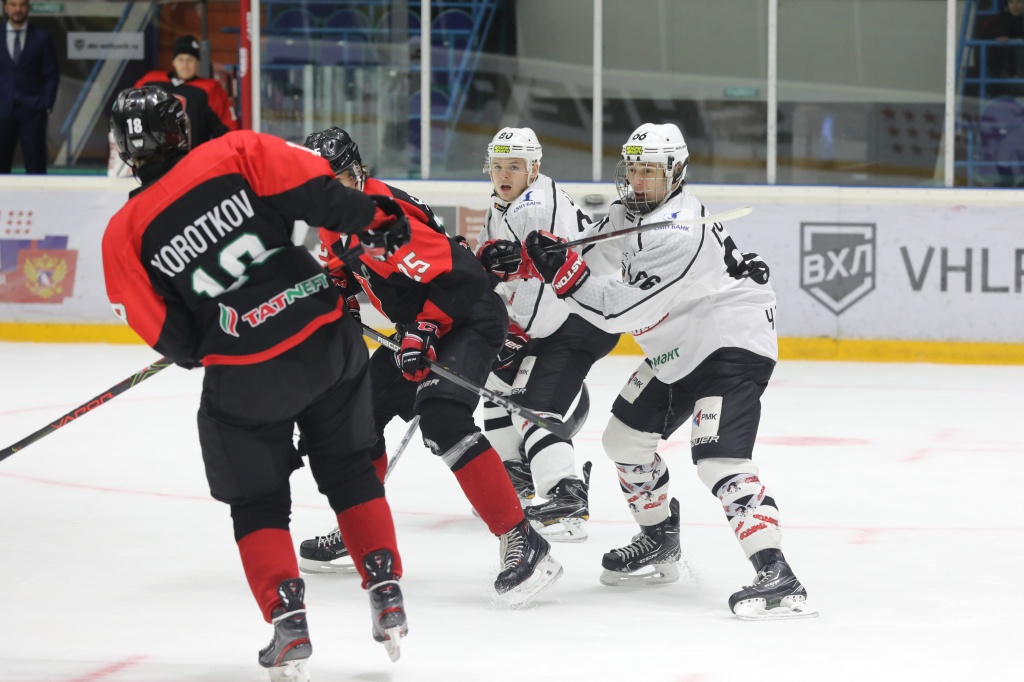 While Sputnik Almetyevsk soared past the opposition scoring six goals, the second game of the back-to-back series featured much fewer goals. Ilya Gorbunov replaced Viktor Seliverstov between the pipes for the visitors and didn’t let anything past him in the opening 40 minutes of play.

Belye Medvedi Chelyabinsk scored first. Early into the second period Alexander Abramov dangled past defenseman with a fake shot and wristed it top-shelf – Rafael Nasyrov reacted too late. Home team managed to bring it back to even only early in the third stanza. Abramov got a minor just 17 seconds after the first face-off of the period and Sputnik capitalized on the ensuing power play 90 seconds later.

Home team looked a better team as they were more frequent in the offensive end, while creating a lot of scoring chances. Early into the extra period of action Ilya Gorbunov almost let one slip past him but it stayed out. Konstantin Lukin picked up the puck, beat two defensemen and dragged it behind Nasyrov.

Belye Medvedi win 2-1, bouncing back from a loss the day before. Sputnik fail to surpass Avto Yekaterinburg in Eastern Conference standings. 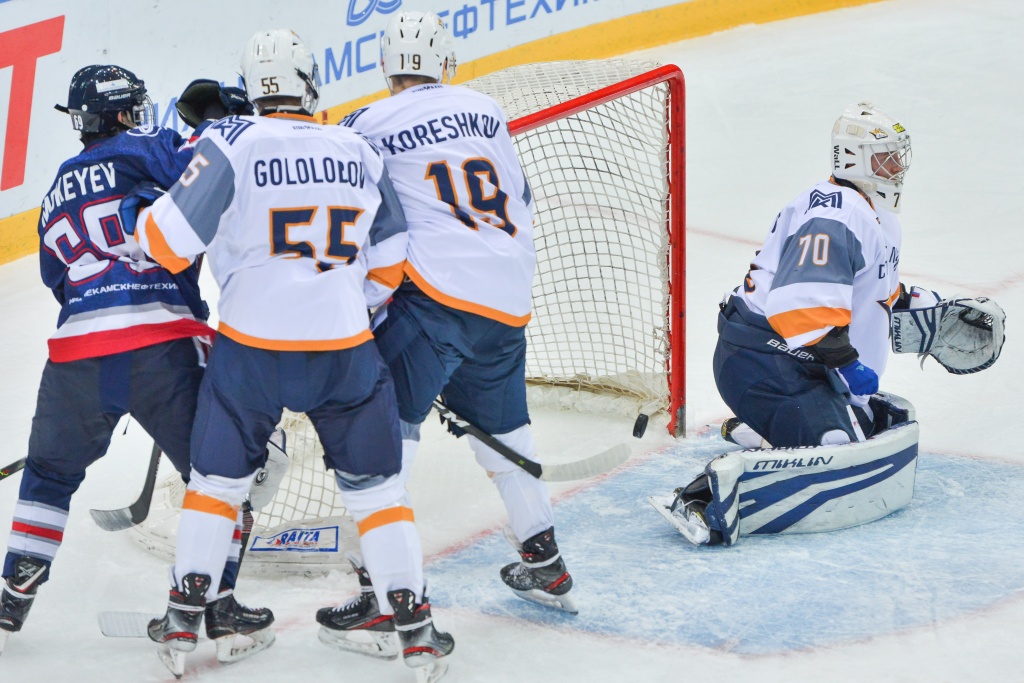 Unlike in the first game of the back-to-back series, home team quickly establish their control of the game and opened scoring just 90 seconds in – Ilya Paranin capitalized on a power play. Rail Mustafin doubled the lead for Reaktor shortly before the intermission. Gleb Moiseyev didn’t allo a goal in the opening period, even though the visitors had the same number of shots.

Magnitogorsk came out hard for the second period – Maxim Bolsunovsky managed to bring it back to a 1-goal differential but a few minutes later Aidar Valeyev restored the 2-goal margin. Bulat Shafigullin, who had scored a hat-trick the day before, picked up two assists.

Third period of action featured no goals, despite the fact that Nizhnekamsk ran into a penalty problem. While Konstantin Kasatkin’s men didn’t get a single minor in the first 40 minutes, they spent half of the third stanza playing shorthanded. Nevertheless, Stalnye Lisy didn’t use it to their advantage and failed at leveling the score.

For the second consecutive time Reaktor was limited to three goals but that was enough to beat Magnitogorsk. Stalnye Lisy leave Nizhnekamsk with just one point and continue their road trip across Tatarstan. 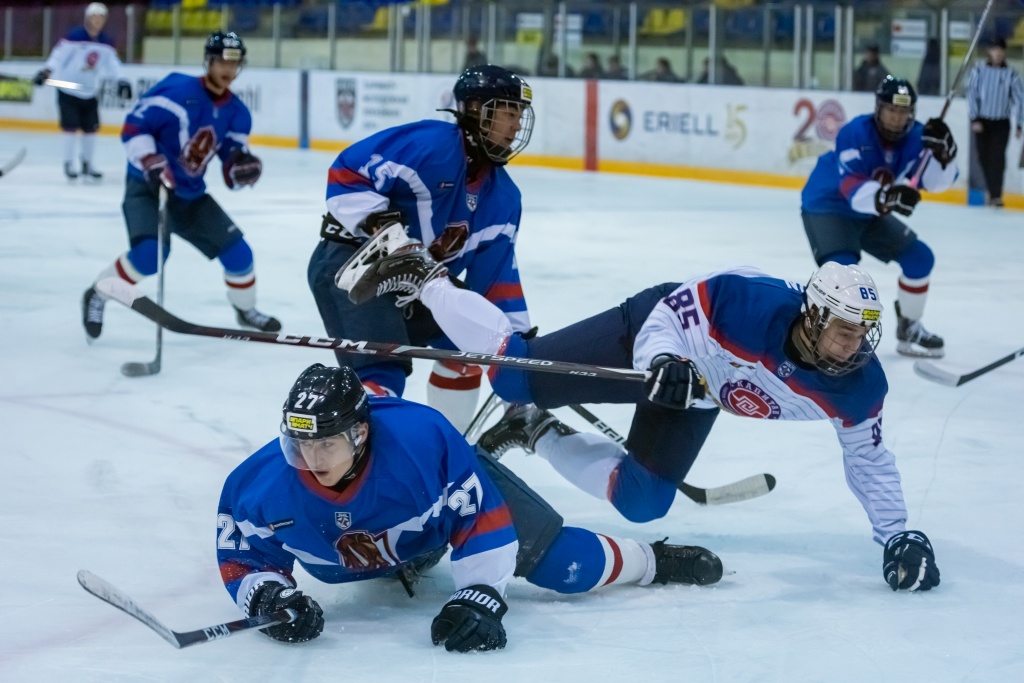 ORG Junior Beijing had to begin their 8-game home stand on the road as their home venue in Dmitrov, Moscow Region currently hosts a women’s hockey tournament, in which Team Russia participates. This is why the ‘Rhinos’ moved to Stupino to face HC Kapitan. Having thus gained two more games on home ice, Kapitan ended their 16-game road trip and the only thing reminding of the visitor status were white jerseys.

ORG had trouble with their roster coming into the game. Captain Yegor Yaroshenko is still sidelined by a knee injury, while forward Nikita Ivashkin has left the team. Wounded ‘Rhinos’ fell apart early in the game – Grigory Ponkratov, Nikita Dorofeyev and Daniil Tyutchev got a tally each past Haoran Hu in the first eight minutes of action. Artyom Klavdiyev upset local fans before the intermission as he solved Artemy Pleshkov, but Daniil Pyatkin restored the comfortable 3-goal lead for his team.

The game wasn’t as high-scoring in the following 40 minutes. The visitors spent half of the second frame playing shorthanded but ORG Junior players took just nine shots on net and didn’t convert on a single man-advantage. As for Kapitan, they capitalized on their only power play opportunity of the period – Amir Garayev scored his 47th career Junior Hockey League goal, setting the final score.

Kapitan win four out their past five games, while ORG Junior further extend their losing streak. The team is still looking for its first point in the league. 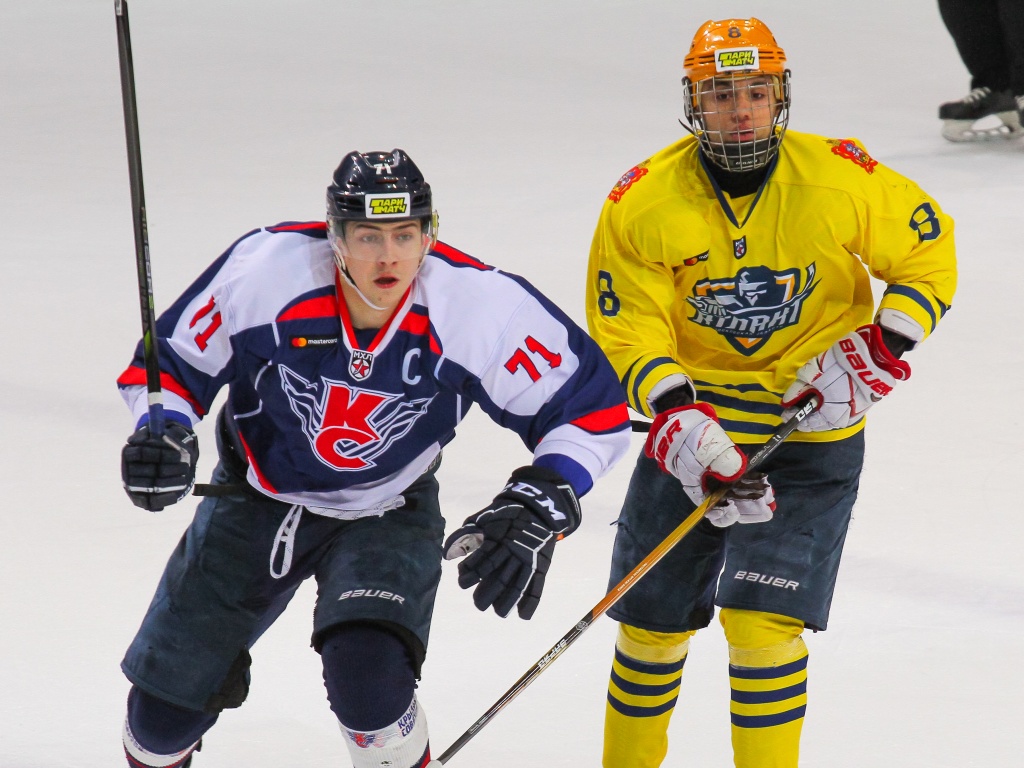 Both teams headed into the game with a string of losses. Krylia Sovetov Moscow lost eight in a row, while Atlant Moscow Region were defeated in five consecutive bouts and were looking to snap the skid. The game began with a quick goal by the visitors. Vladislav Nikolayev received a long pass from Anton Novikov, motored into the zone, dangled past a defenseman at full-speed and whipped it between the wickets of Denis Popov. The teams headed to the dressing-rooms with the narrow margin on the scoreboard. Atlant got two minors in the period but Alexander Trofimov’s men couldn’t convert on either.

The visitors got off to a great start in the second – Matvey Kokovin doubled the lead for Atlant. However, ‘Soviet Wings’ turned the momentum around towards the end of the frame. First Pavel Zubchinsky sent one past Platon Zadorozhny off a beautiful passing play on a man-advantage. Home team created several high-scoring chances after that but Mytsichi netminder was on top of his game, and was also bailed out once by a post. Atlant played deep in their defensive territory, holding on to their 1-goal lead.

Krylia Sovetov rushed down the ice looking for the equalizer in the third stanza. All Moscow players were keen on finding the back of the net. As for Atlant, they switched to counter-attacks. A few minutes into the frame Daniel Usmanov pickpocketed Krylia Sovetov’s defenseman, broke away and elevated it over the shoulder of Popov. Shortly after that Atlant pulled off the same play. They survived a lengthy possession by Moscow and bolted for a counter-attack. Grigory Nesvetayev sniped one home through a screen.

Home team tried to make things interesting as Damir Belyalov got a goal back but Yegor Starkov scored on the empty net, bagging it for the visitors.

With this 5-2 decision Atlant end their losing streak and climb a spot higher in the standings. Despite the loss, which extended Krylia Sovetov’s skid to nine games, they are still have six point more than Mytsichi.