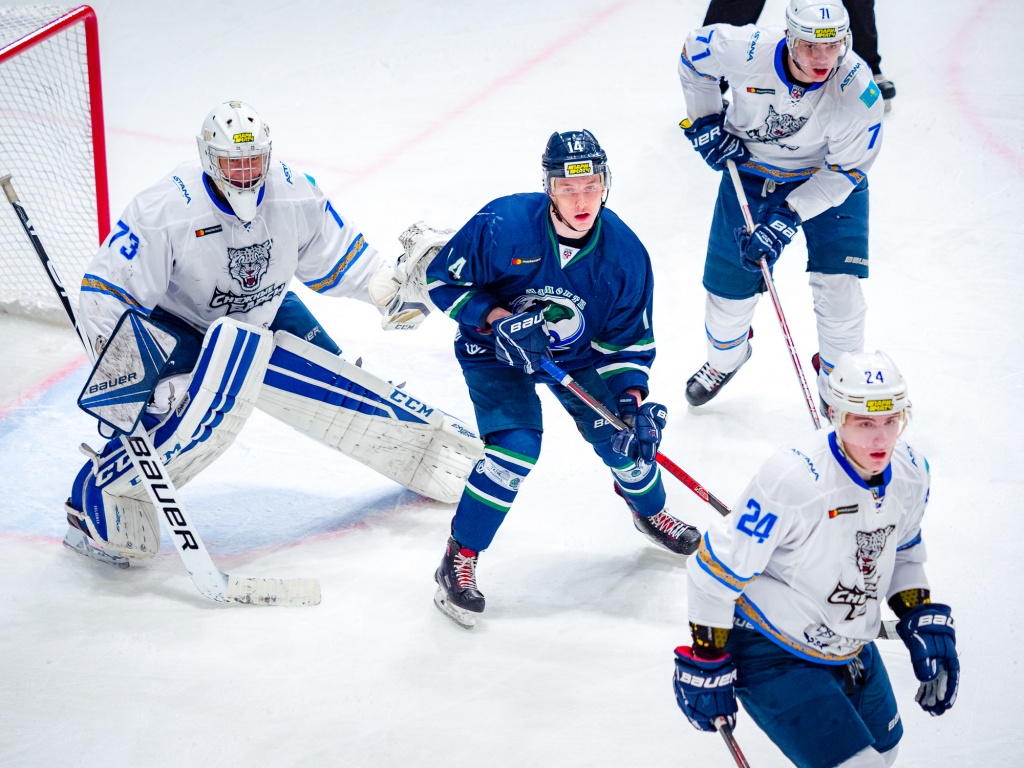 Mamonty Yugry didn’t make any adjustments to their roster after the previous game, while Sergei Starygin made drastic changes in every line. For instance, Maxim Pavlenko got the nod instead of Roman Kalmykov.

The teams spend most of the time exchanging power play opportunities as they registered 16 penalty minutes each. The game began with two off-setting minors for roughing. Mamonty Yugry took the most out of the 4-on-4 situation – Damir Shirgaziyev skated down the offensive zone and elevated the puck just over netminder’s pad with a backhand shot. Second goal came soon after that. It took the ‘Mammoths’ just a few seconds to convert on their second man-advantage – Maxim Pavlenko stopped Evgeny Timoshenko’s shot but the puck bounced right on the blade of Kirill Rudenko who sent it into the yawning net.

In each of the following periods home side scored three goals against Snezhnye Barsy Nur-Sultan, including a shorthanded marker. Damir Shirgaziyev racked up 4 points, scoring 2 goals and notching 2 assists. After allowing his 5th goal Pavlenko was replaced in net by Kalmykov.

Sergei Starygin’s men managed to eke out a consolation goal – Dias Guseinov stole the shutout from Konstantin Kuzmaul. Snezhnye Barsy finish the road trip with another loss, while with this 8-1 success Mamonty Yugry capture 14th spot in the East. 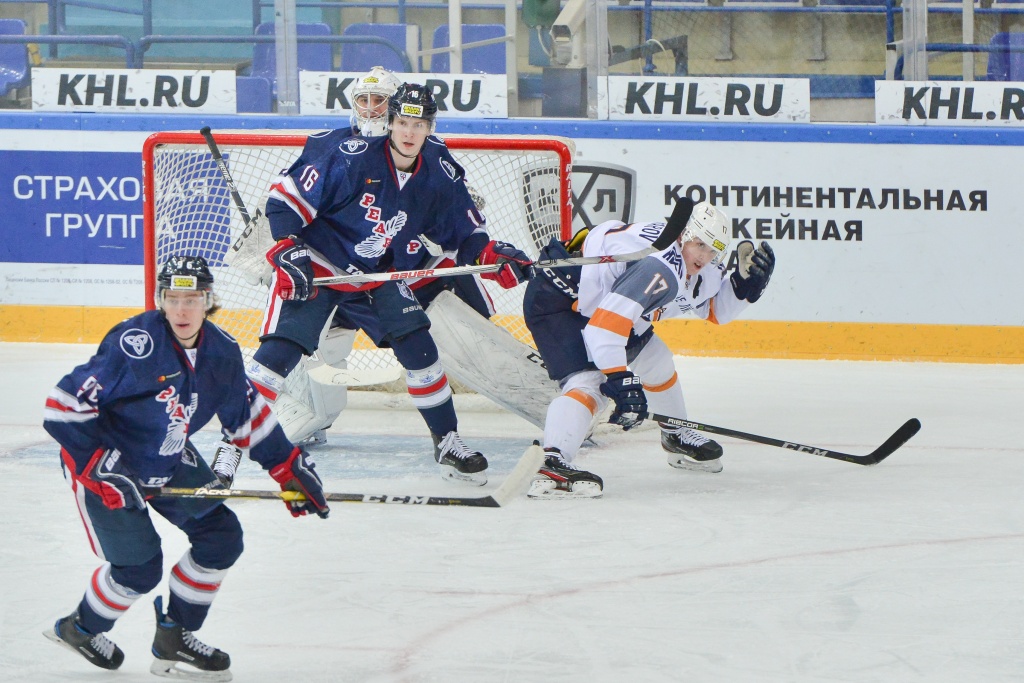 Stalnye Lisy Magnitogorsk went on the road to Tatarstan missing several key players, including their top-scorer Dmitry Sheshin and Yuri Platonov. Reaktor Nizhnekamsk began their home stand with two consecutive blowout losses against Tolpar Ufa and were looking to bounce back in front of their fans.

The game was a see-saw affair. The teams opted for fast-pace hockey throughout the boat but weren’t too successful at capitalizing on their scoring chances and Bulat Shafigullin’s early marker remained the only one for a long time.

Yaroslav Ozolin had to make a number of huge saves in the second period of action. He really bailed Nizhnekamsk out on a few occasions, and Magnitogorsk let a few good opportunities go to waste themselves. Midway through the frame Yegor Markin skated down the wing, dangled past his opponent and took a backhand shot. Ozolin had a piece of it and gave up a rebound, which Markin buried from a tough angle.

Third stanza also featured almost no stoppages of play, despite an abundance of scoring chances. Home team found success in the early minutes of the period again – just a few seconds past the opening face-off of the period Shafigullin made his way to Ozolin’s net down the ice and scored his second of the game. Stalnye Lisy responded only within the final five minutes of regulation and forced overtime.

Extra period of play also had offensive rushes going both ways but they led almost to no scoring chances. The visitors were in possession for the majority of the time. With 17 seconds on the clock Shafigullin picked up the puck behind Nikolai Shashkov’s cage. Meeting no adversary, he first decided to pull off a Michigan but changed his mind and tucked it home on the wraparound to complete his hat-trick. With his 3-2 victory Reaktor end their losing streak.


Ladiya beat Avto, get their revenge 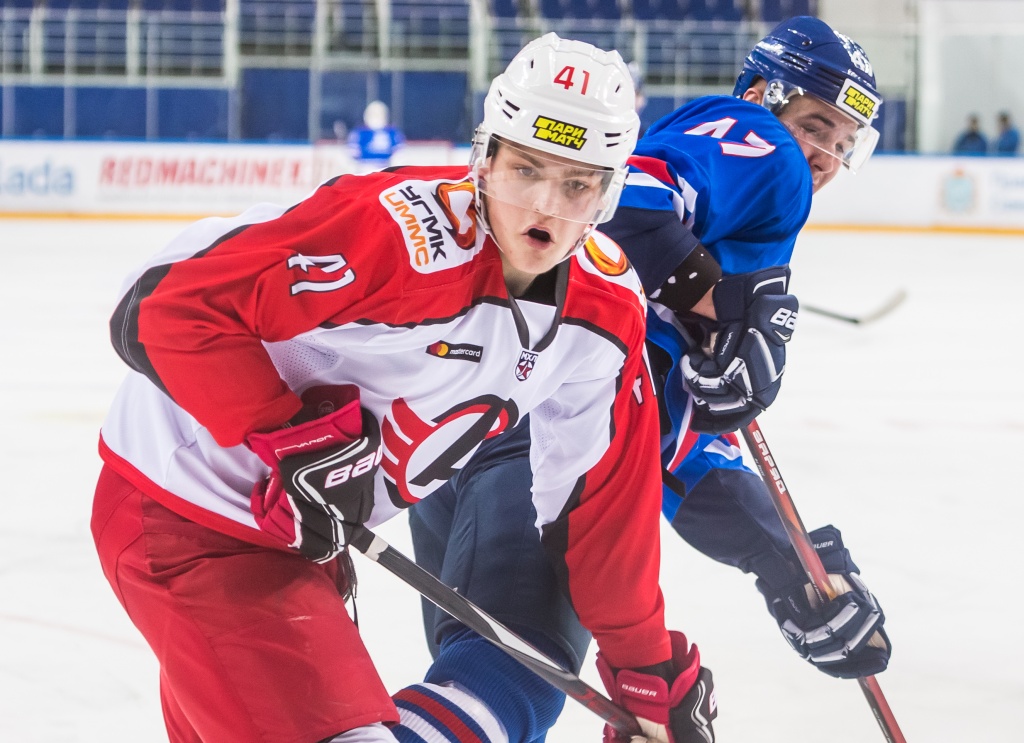 The teams opted for fast-paced hockey right out of the gate, constantly exchanging offensive rushes. However, shots were rarely taken and goaltenders easily stopped most of them. Midway through the opening period of play Ladiya Togliatti got on the board – Ruslan Sadretdinov sent Stepan Steshenko in on a break in transition. Despite all effort by rushing back defenseman, Ladiya forward skated to the slot and beat Vladimir Sartakov in tight. The latter had replaced Mikhail Isayev in Avto Yekaerinburg’s goal after the game the day before.

With three minutes on the clock home team doubled their lead. This time Sartakov picked up an assist as Danila Lotov converted on a power play attempt. Ladiya’s power plat unit didn’t do as great in the following period and Yekaterinburg pulled back to within one with a shorthanded goal. Ilya Ovchinnikov pounced on Togliatti’s mistake in the neutral zone, streaked down the left wing, fired a shot from the circle and beat Igor Kulakov on the far-side. Notably, Ladiya coaching staff also swapped their netminders after the previous game.

Despite all effort put through by Vitaly Solovyov’s men, Avto couldn’t get anything else in this one – final push was cut short by Dmitry Semenovsky, who scored on the empty net to bag it. Ladiya win 3-1 and get their revenge for losing the day before. 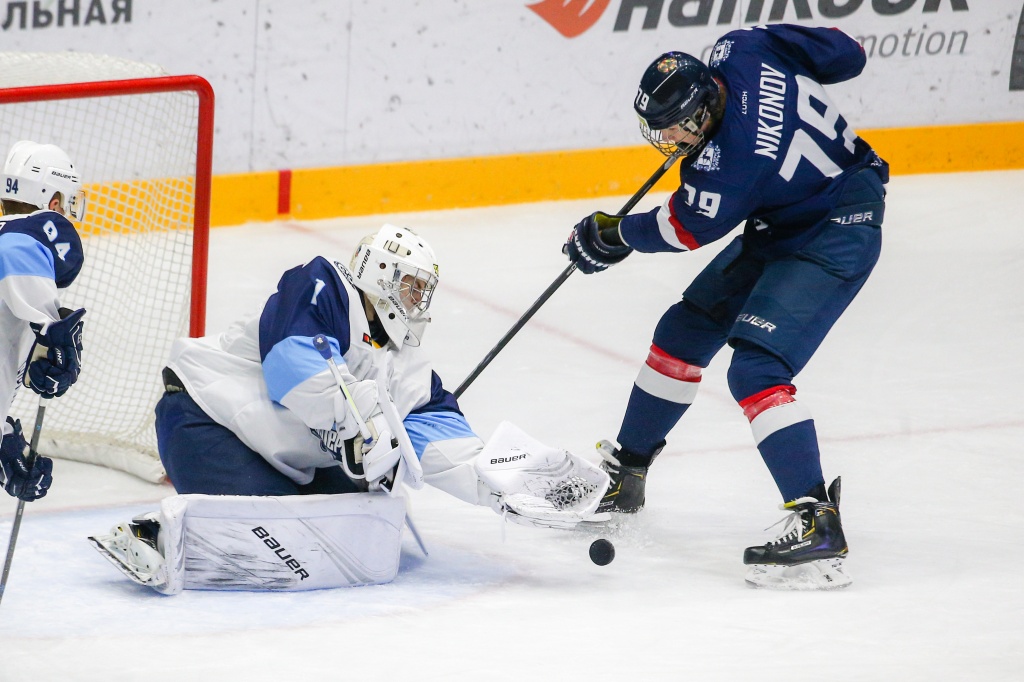 Chayka Nizhny Novgorod hosted Sibirskie Snaipery in the second game of the back-to-back series. Novosibirsk once again prevailed but this time around managed to do that in regulation. Home team scored their first and only goal of the game shortly before the midway point of the opening period – Roman Sinitsyn found the back of the net to capitalize on a power play opportunity.

The visitors essentially got the result they wanted in the second frame. Early into it Dmitry Ovchinnikov tied the game up. Nizhny Novgorod killed off a penalty but got scored on right after it at even-strength – Yegor Verkhorubov put Sibirskie Snaipery in the lead. Danil Davydov set the final score as he beat Yegor Gromovik late in the stanza. Chayka took almost five times as many shots as the opposition in the third period but couldn’t change anything on the scoreboard. The ‘Snipers’ win 3-1. 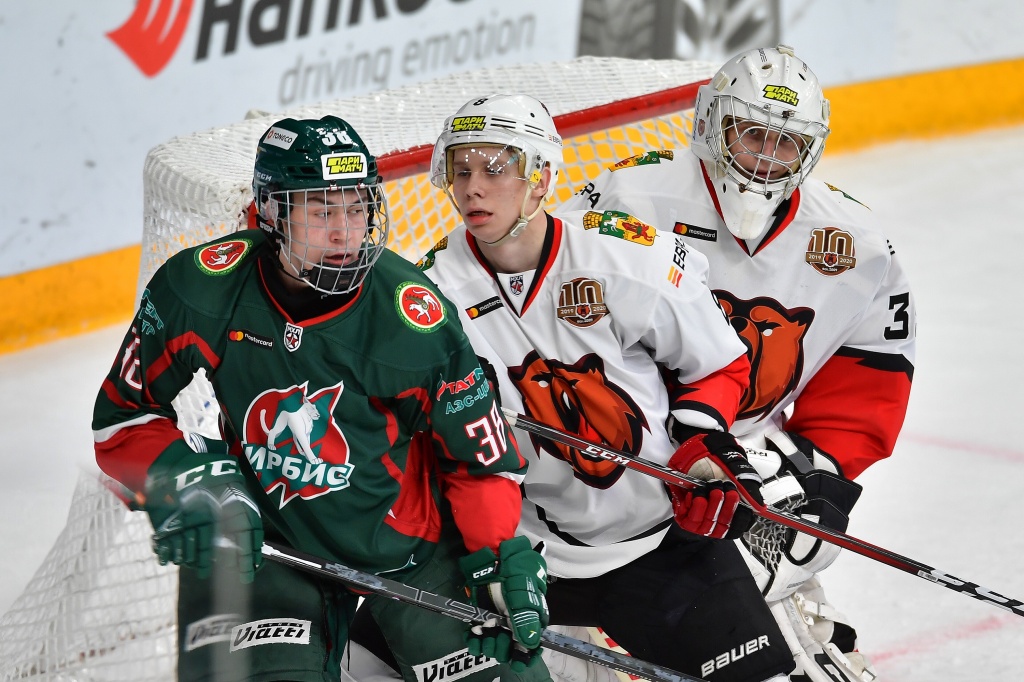 Irbis faced Kuznetskie Medvedi in Kazan, who lost 5-1 the day before to the Tatarstan team. Novokuznetsk suffered another loss but in a much more hard-fought game. The fans weren’t treated to any goals in the opening period of action but home side got on the board five minutes into the second period as Yegor Vernigor got it past Artur Akhtyamov.

In the final stanza the ‘Bears’ ran into a penalty problem. Kazan got three consecutive power play attempts and converted on one of them – midway through the period Kirill Mukhin finished off a neat passing play. The visitors got yet another unforced penalty as Ivan Khrunin got a minor for cross-checking near the boards and with ten seconds on the clock the very same Mukhin robbed the opposition of a much needed point. A fight broke out towards the end of the game as Alexander Makarevich and Adel Bulatov dropped the gloves. 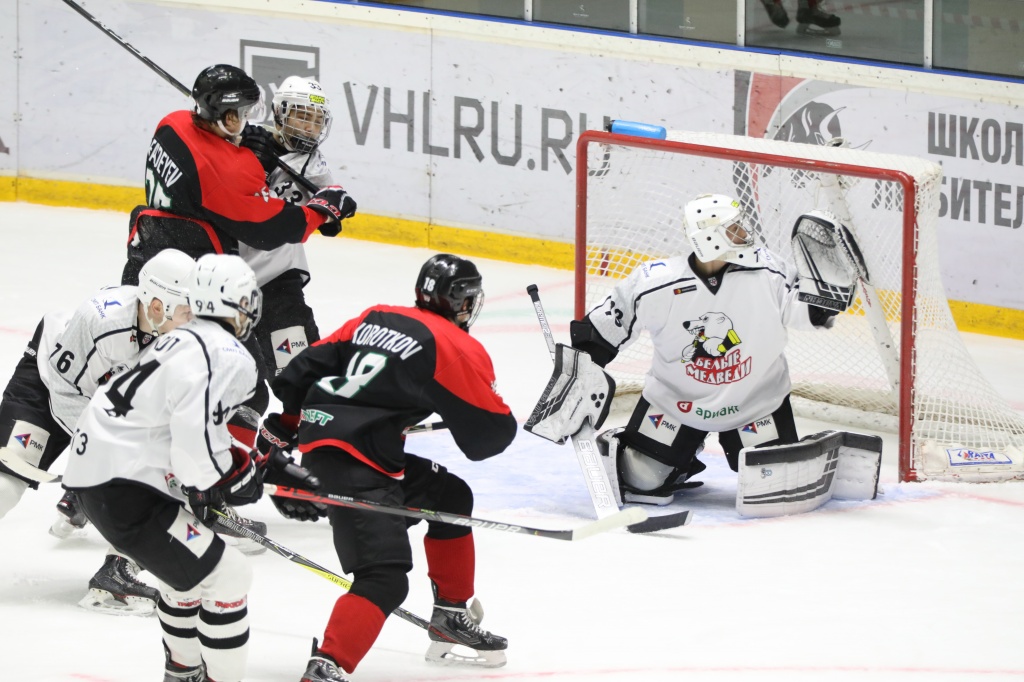 Sputnik defended the ice against Belye Medvedi Chelyabinsk in Almetyevsk and managed to pull off a bit of an upset. Despite the fact that Sputnik are currently located higher in the standings than Chelyabinsk, no one expected the latter to lose in blowout fashion. Seven minutes into the game Rail Sharipov found an opening between the surface and pads of Viktor Selivyorstov. Soon after that Bogdan Korotkov improved the lead.

The teams picked up the pace after the intermission and Almetyevsk capitalized on their scoring chances better. Aidar Nazmutdinov made it a 3-0 hockey game and with three seconds remaining in the frame Ilya Avvakumov chipped it in another tally. Sputnik stayed on schedule and scored two more goals in the third stanza. Nazmutdinov got his second of the game and Vyacheslav Kolesnikov set the final score late in regulation. Sputnik enjoy a 6-0 win on home ice. 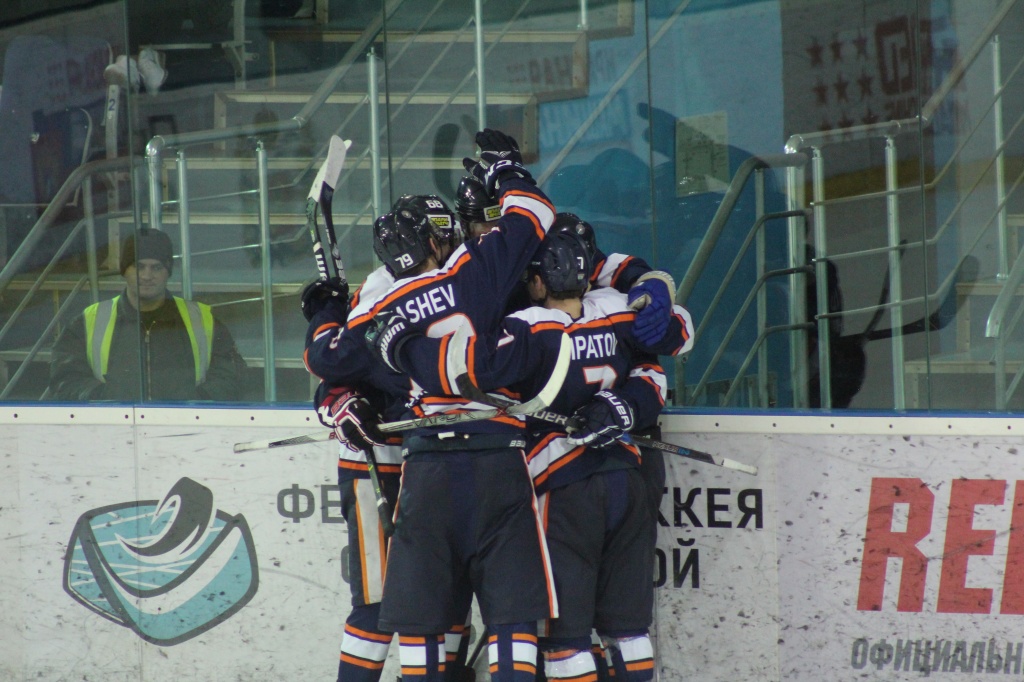 Last game of the day took place in Orenburg where Sarmaty faced red-hot Tolpar Ufa at Zvyozdny. With a win Ufa could have climbed on top of the Eastern Conference even if only temporarily. However, Orenburg presented the visitors with a great challenge and got on the board midway through the second period – Alexei Barkhatkin got the goal, while Ivan Timashev registered an assist.

Sergei Shapovalenko’s minor in the third stanza proved to be crucial. He was a bit careless with his stick and was assessed a 2-minute penalty. Home team pounced on the opportunity as Barkhatkin got his second of the game to secure the win for Sarmaty over one of the best teams in the East.