Back to the list
News
MASTERPIECES BY ABROSIMOV AND DEMIDOV, DYNAMO DOMINATION IN THE WEST. JHL WEEK ROUND-UP
ALEXANDER GUSKOV: “THERE’S PLENTY OF TALENT IN JHL. ALL THEY NEED IS A CHANCE”
“I PLAY AT THE RINK I USED TO COME TO AS A KID”. QUOTES BY TOP PLAYERS OF THE WEEK
DYNAMO DOMINATE SEVEN DAYS, TUMANOV STEPS INTO THE SPOTLIGHT. JHL WEEK ROUND-UP
BELYE MEDVEDI GET ON A ROLL, MAMONTY YUGRY WIN EIGHT STRAIGHT. OCTOBER 10TH ROUND-UP
NOT A WORD ABOUT HOCKEY. ILYA PARANIN
CHAYKA AND RIGA BLANK OPPOSITION, KRASNAYA ARMIYA AND DYNAMO WIN IN ST. PETERSBURG. OCTOBER 9TH ROUND-UP
DYNAMO MOSCOW SCORE 9 GOALS, SOAR TO ON TOP OF THE WEST. OCTOBER 7TH ROUND-UP 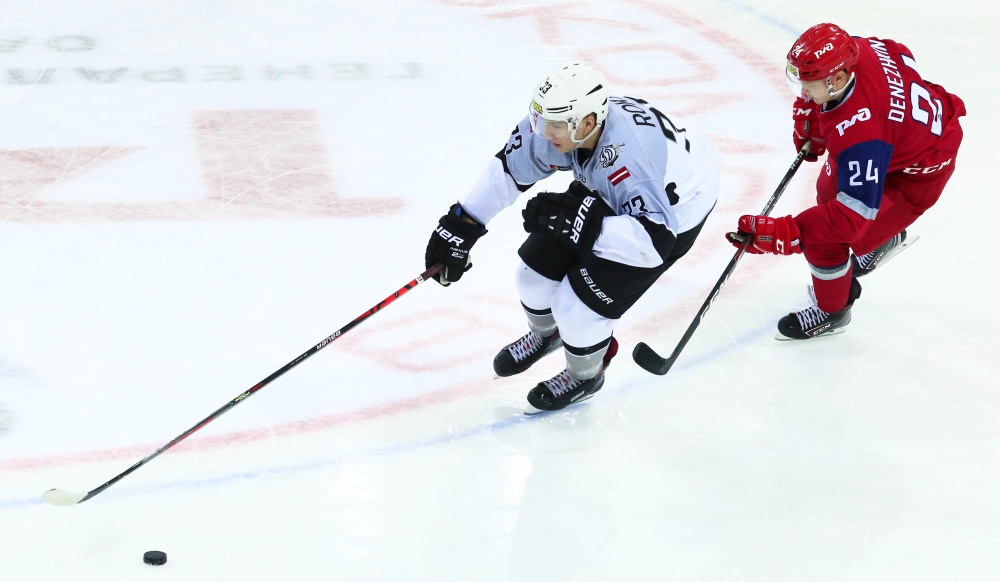 Seven regular season games took place in Parimatch Junior Hockey League on October 20th. The gameday kicked off in Vladivostok. We take a look at Sunday action in this review. 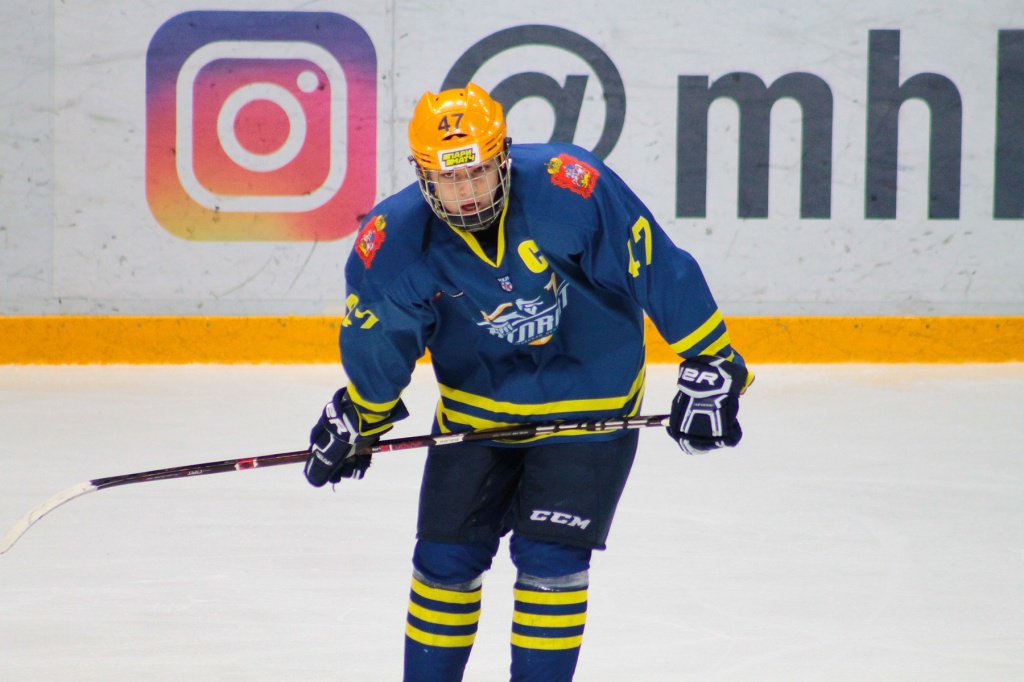 Atlant Moscow Region faced JHC Dynamo St. Petersburg in Mytishi. The teams exchanged two goals in the opening period of play. Home team got a quick tally from Igor Shmelyov, but soon Dynamo not only tied it up but also got in the lead as Sergei Bolshakov and Nikita Buruyanov found the back of the net. Dynamo got a minor penalty in the last minute of the frame and it took Atlant just a few moments to convert on it – Nikita Zimin brought it back to even again with just four seconds remaining on the clock.

The teams combined for just one goal in the second stanza – Buruyanov scored his second of the game to put Dynamo back in the lead. After that Maxim Kloberdants was relieved by Danila Fomin. Dynamo scored on him as well. Pyotr Yakovlev and Maxim Kaprov secured a 5-2 win for St. Petersburg. 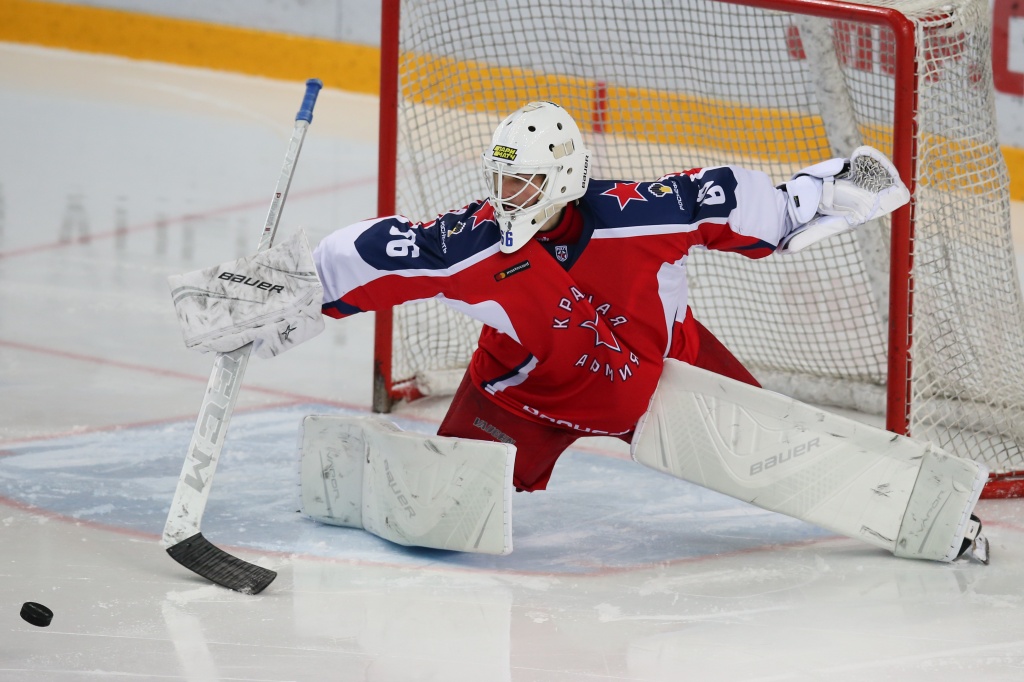 Krasnaya Armiya Moscow have been red-hot lately and they put it on display in the opening period of the game against SKA-Varyagi. ‘Army men’ scored three unanswered goals past Pavel Davydyuk – Leonid Klimov, Denis Nedilko (powerplay goal) and Moscow’s top-scorer Takhir Mingachyov found their targets. Krasnaya Armiya cooled down a bit in the second frame and yet still impoved their lead to 4-0. Daniil Anop got the marker. Midway through the period they got another one over the goal-line but it was waved off as Yegor Korbit kicked the puck into the net.

Home team continued to terrorize SKA-Varyagi’s defense in the third stanza and at times the visitors looked completely lost. Mingachyov went on to score his second of the game, while Yegor Kuzminov added a tally of his own to set the final score at 6-0. Goaltender Matvey Kiselyov stopped 15 shots for his second shutout win of the season. 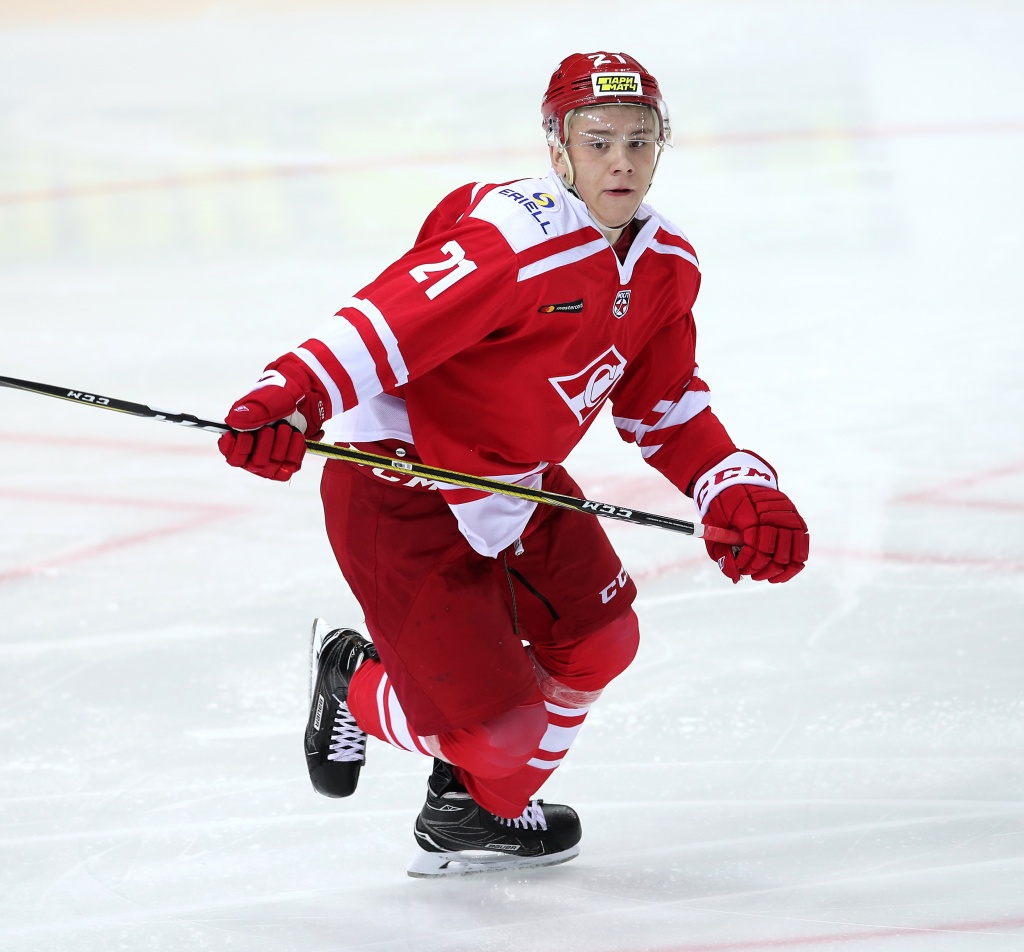 JHC Spartak Moscow defended the ice against HC Kapitan Stupino. The red-and-white spent a lot of time around Leonid Sklyar’s goal but it didn’t help them to get on the board. Both teams played with caution in their defensive zones and didn’t get a single penalty in the opening 20 minutes. Spartak converted their momentum into goals in the second frame – Yegor Kruzhenkov broke the deadlock and late in the stanza Yegor Kravchenko made it a 2-0 hockey game.

Stupino fans got some hope late in regulation as Dmitry Konstantinov found the back of the net but the visitors failed to find the equalizer. Kapitan pulled their netminder for the extra-attacker and Yegor Kruzhenkov scored his second of the game on the empty net to secure the 3-1 win for Spartak. 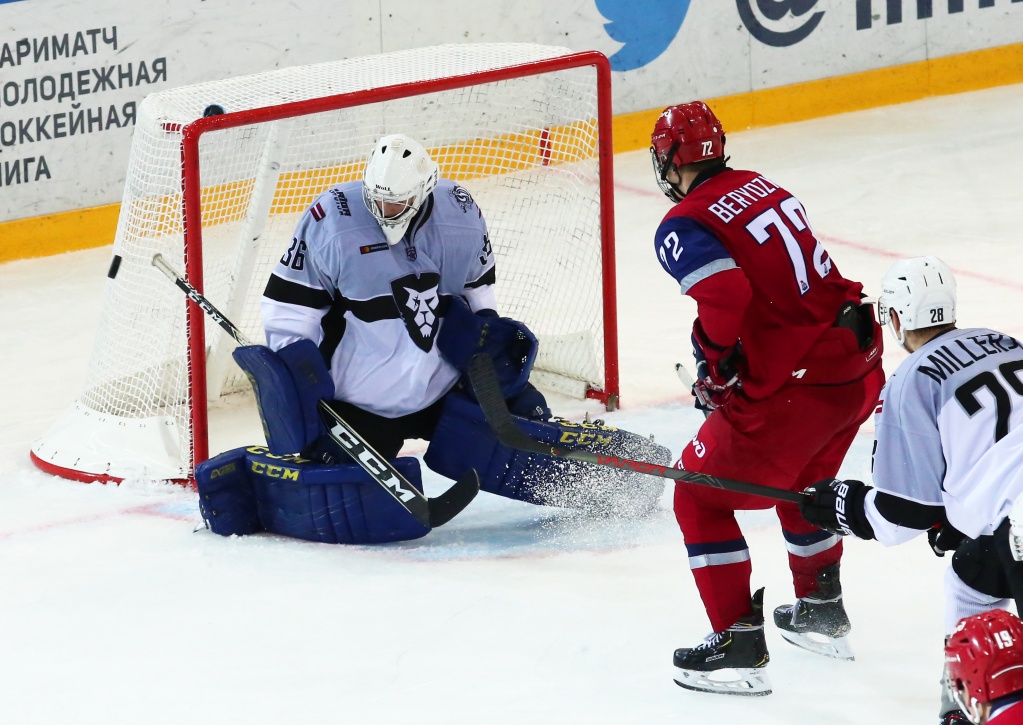 Another exciting game took place in Yaroslavl where reigning champions Loko faced HK Riga. The visitors capitalized on their initial power play attempt of the game as Anton Sinegubovs pocketed it 5-hole on Vladislav Okoryak. Home team responded late in the period – Pavel Tyutnev jammed it into the net with just four seconds remaining on the clock. Early in the second frame Okoryak gave up a fat rebound on Patrik Zabusovs' shot and Richards Grinbergs buried the rebound.

Just 24 seconds into the third period Zabusov converted on a breakaway chance. Mikhail Semirnov brought the game back to a 1-goal differential but Antons Sinegubovs restored the margin with a powerplay tally just a minute later. Janis Svanenbergs scored on the empty net and set the final score. Riga beat ‘railway men’ 5-2 on the road. 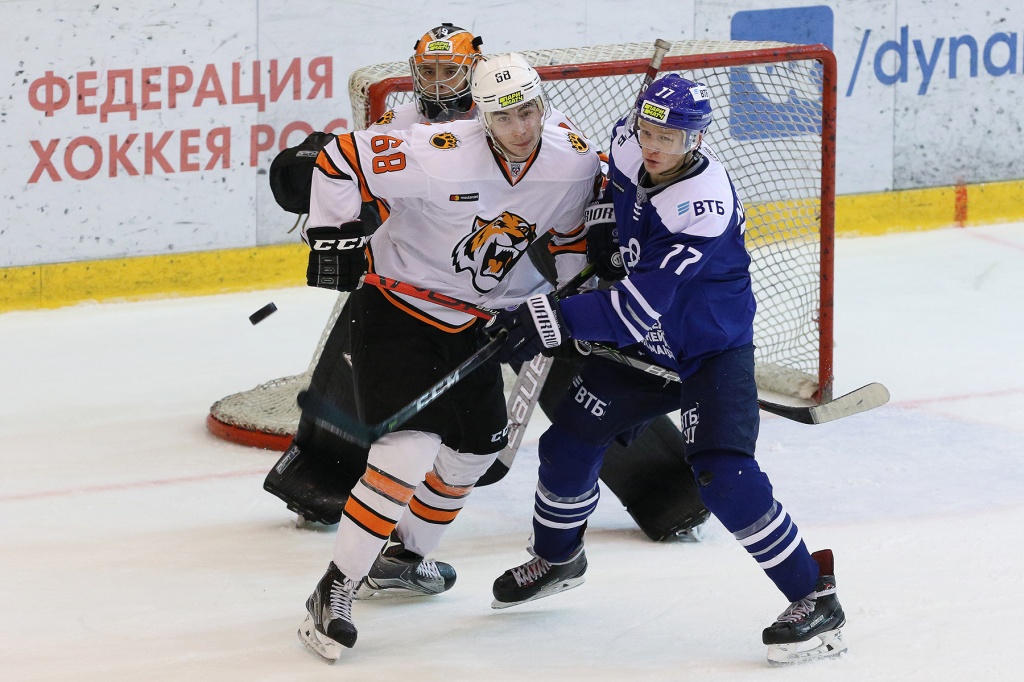 First period of play in the game held Tver, in which JHC Dynamo Moscow faced Amurskie Tigry Khabarovsk, ended with a scoreless tie. Home team took twice as many shots as the ‘Tigers’, as the latter had just five shots against Ivan Kulikov. The visitors evened the game out in the second stanza and Dynamo netminder had a lot on his plate. At the same time Khabarovsk tighten up defensively. Multiple penalties didn’t lead to any scoring in the second period either.

In the end it was just one goal that decided the game. Three minutes into the third period Vladislav Tsyamryuk got a tripping minor and Alexander Kisakov scored the winner for Dynamo with a powerplay tally. Kulikov stopped all 30 shots he had to face to get a shutout win. 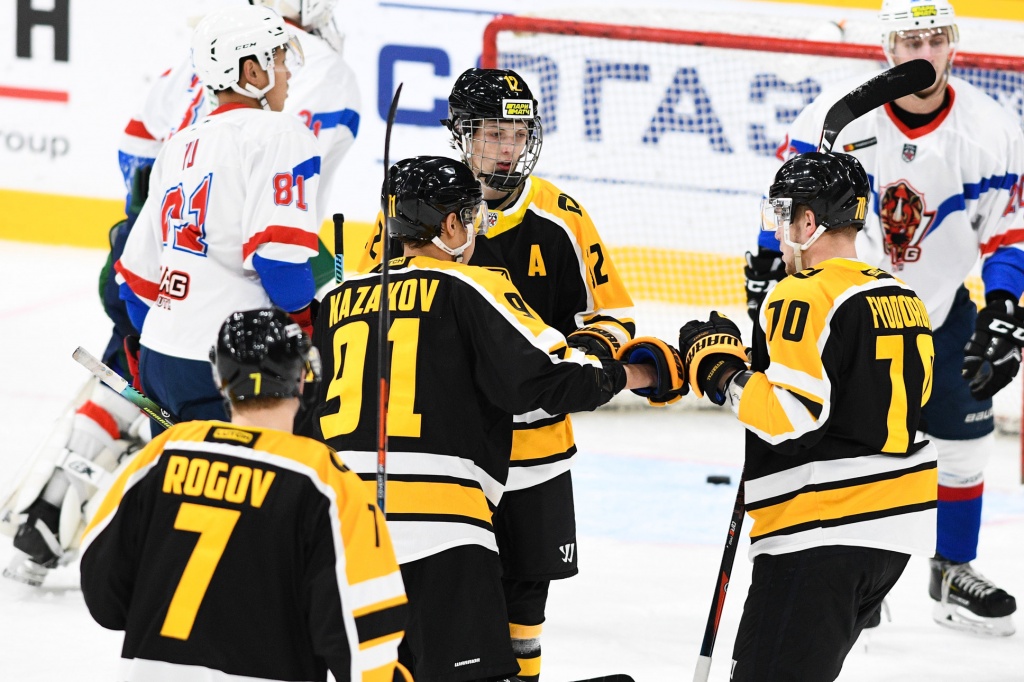 The gameday ended in Cherepovets where Almaz faced ORG Junior, who are still winless this season. Cherepovets established right away they weren’t going to go easy on the Chinese team, scoring five unanswered goals in the opening period of action. Vladislav Fyodorov, who lead Almaz in points, scored twice, while Nikita Lukhovskoy, Yegor Chizhikov and German Grachyov got a tally each. Fyodorov completed his hat-trick in the second period, while Maxim Kazakov and Daniil Belyalov added a marker each.

Cherepovets improved their lead to double digits in the third stanza. Fyodorov became the first player of the season to score four goals in a single game, while Nikita Guslitov got himself a marker, too. Almaz get a blowout win as expected as they beat the ‘Rhinos’ 10-0. 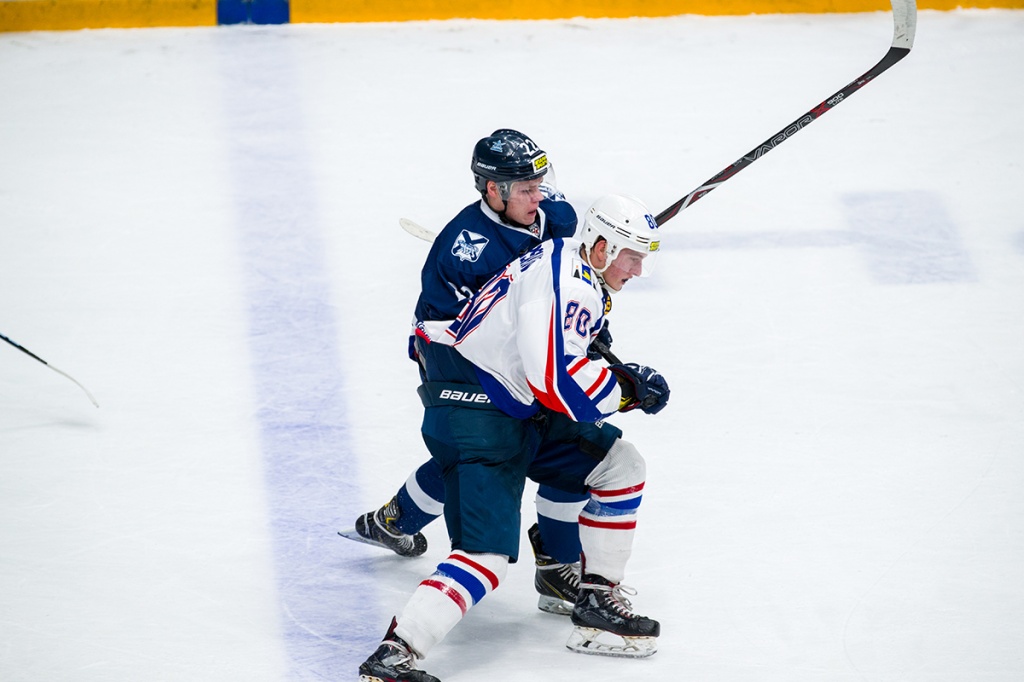 For the first time in Parimatch Junior Hockey League history Taifun Primorie Region faced off against Sakhalinskie Akuly in Russian Far East Rivalry at Fetisov-Arena in Vladivostok. The first tilt between the two proved to be exciting. Hopefully, it’s going to set the tone for their future games. Yuzhno-Sakhalinsk converted on their scoring chances better throughout the game and establish a solid lead. Yegor Ageyev scored on a power play in the opening period of action and then the visitors went on to get three more tallies in the second frame – Daniil Glukharev got a pair, while Ruslan Akhmetvaliev chipped in one more.

Primorie Region grabbed the momentum after that, pulled back to within one but failed to force overtime. Ivan Lapshin, Ivan Bunov and Leonid Pasmanik got the markers for Taifun. They had almost seven minutes to find the equalizer but home team ran out of time. Sakhalinskie Akuly win 4-3.