Eight regular season games took place in Parimatch Junior Hockey League on October 15th, of which seven were Eastern Conference matchups. We take a look at all Tuesday games in this review. 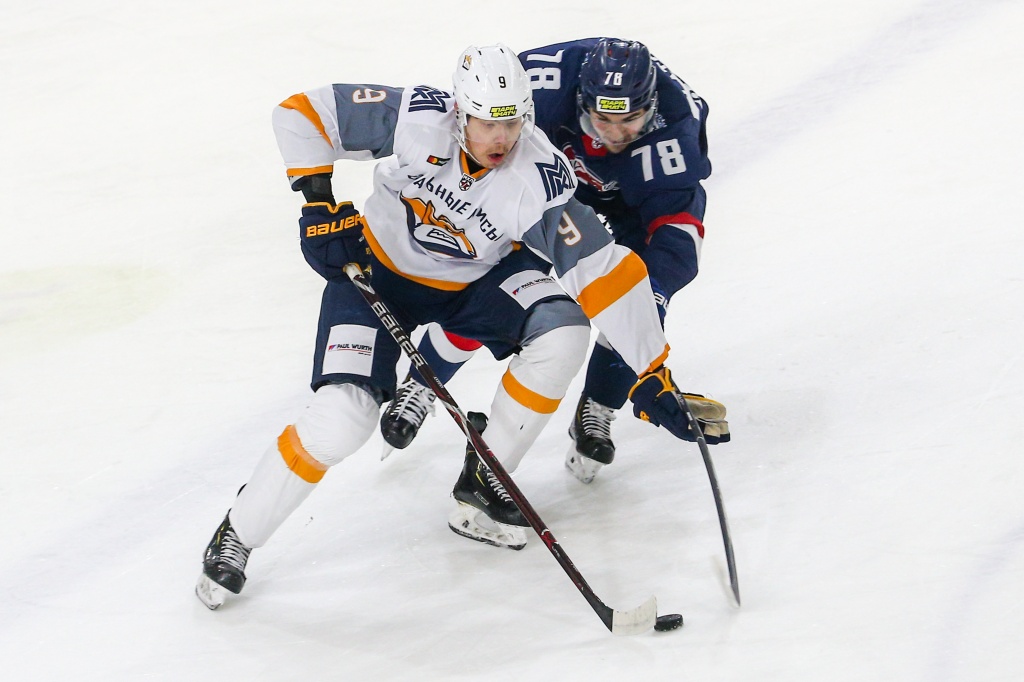 The gameday came to an end in Nizhny Novgorod where Chayka squared off against Stalnye Lisy Magnitogorsk. Gleb Petrov was in the spotlight for the visitors in the opening period of play as he scored the first goal of the game and then game Nizhny Novgorod their second lead. The visitors answered with a tally by Yuri Platonov, which came late in the period. ‘Steel Foxes’ won the second frame as they got in the lead with markers by Andrei Mozyakin and Semyon Buyvan. After that Maxim Gromovik replaced Alexander Yevdokimov in goal for the home side.

The goaltender swap helped Nizhny Novgorod pick up the pace but it changed nothing on the scoreboard. Late in regulation Yegor Spiridonov improved Magnitogorsk’s lead to two goals and Nizhny Novgorod could only wind it down back to one as Denis Morozov set the final score. Stalnye Lisy win a hard-fought game 4-3 on the road. 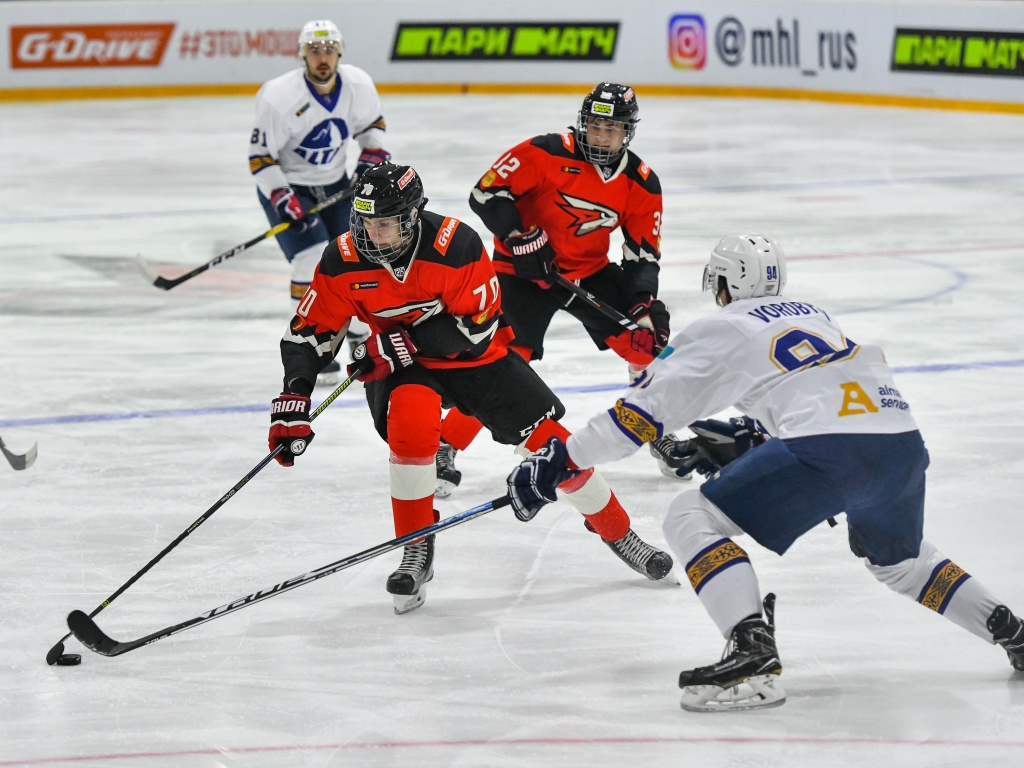 First period of action followed the same scenario as the day before. Altay Ust-Kamenogorsk had the momentum on their side, constantly creating scoring chances and opened scoring just four minutes in. Kazakhstan team captain Stas Petrosyan found the back of the net. The ‘Hawks’ also gave Vladislav Nurek work to do and even got one past him but officials disallowed the goal after video review as the puck never actually went in.

Nothing changed in the early minutes of the second period but Omskie Yastreby managed to even it out towards the 10th minute. With five minutes on the clock Pavel Chinakhov cut to slot from behind the net with some speed and backhanded it past Nurek. Altay got a minor penalty in the very next shift – despite all protests from head-coach Oleg Bolyakin, his team was given a bench minor for too many men on the ice. Omsk converted on the initial power play attempt of the game – with six seconds remaining on the penalty German Voloshin received a pass and hit the net with a powerful wrister.

Third period was delayed. Arena servicemen had to put Georgy Dubrovsky’s goal back into place. But it was a frame to wait for as the teams combined for six goals. It all began just 13 seconds in – Semyon Astashevsky got the puck after a won face-off in the attacking zone and improved the lead for the home team. It took Altay just 10 minutes to not only get back even but also regain the lead. Stas Petrosyan scored two powerplay goals and completed his 2nd career Junior Hockey League hat-trick, while Maxim Chalov added an even-strength marker.

Omskie Yastreby turned everything upside down again in the final ten minutes of regulation. First Arseny Gritsyuk tied it up and then with 34 seconds on the clock Astashevsky got his second of the game to win it for the ‘Hawks’. Ust-Kamenogorsk pulled their netminder for the extra-attacker but ran out of time looking for the equalizer.

Altay see their 5-game winning streak come to an end and fail to rise to the second place in the East, while Omskie Yastreby get their revenge for losing the day before. 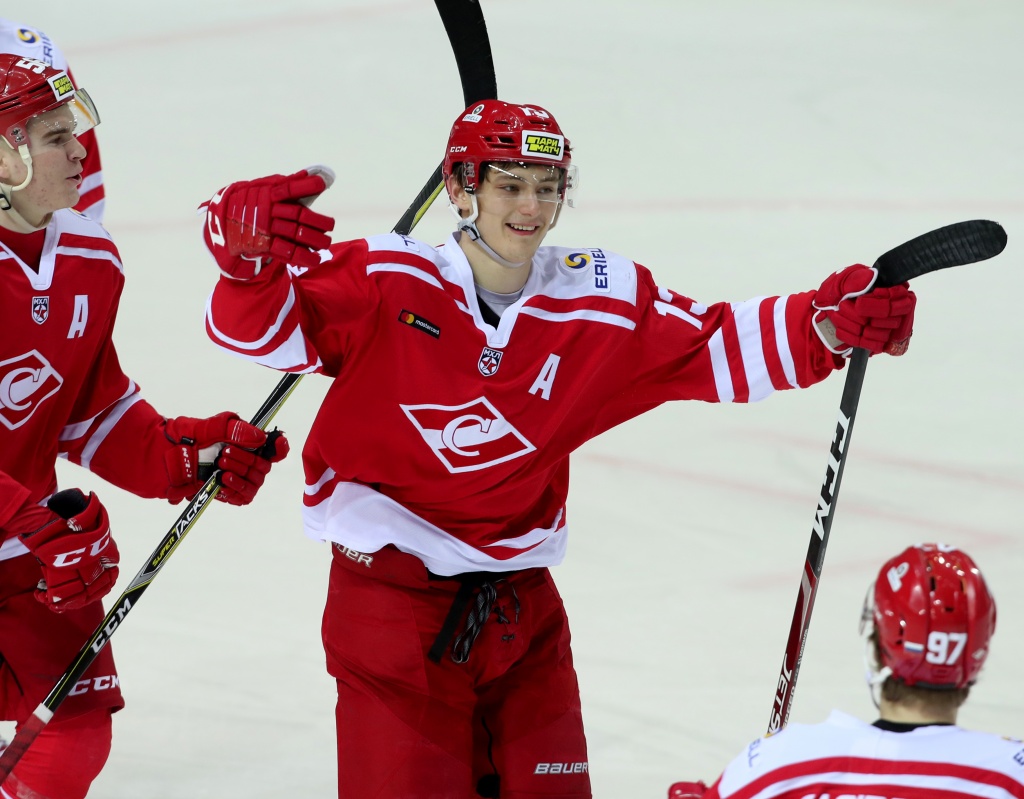 Another thrilling game was the one between JHC Spartak Moscow and Russkie Vityazi. First 40 minutes of play weren’t very eventful as the fans got to see goals only early in the first period. Alexander Kvartalnov scored his 1st career Junior Hockey League goal and Russkie Vityazi got a tally from Leon Zambakhidze.

However, the teams combined for five goals in the third frame. The visitors had the momentum throughout the stretch. Chekhov got their second lead of the game with a marker by Zakhar Bardakov. Three minutes later Kirill Kondyrev doubled the lead for Russkie Vityazi. The red-and-white managed to ameliorate the situation in less than two minutes. First Anton Mishakov converted on a power play and 30 seconds later Spartak captain Alexander Oskin brought it back to even, infuriating Anton Shabulin, who shattered his stick over the net. In the following shift Russkie Vityazi had a bad line change and went down a man. Spartak generated an odd-man rush and Ruslan Novruzov scored another goal off it. 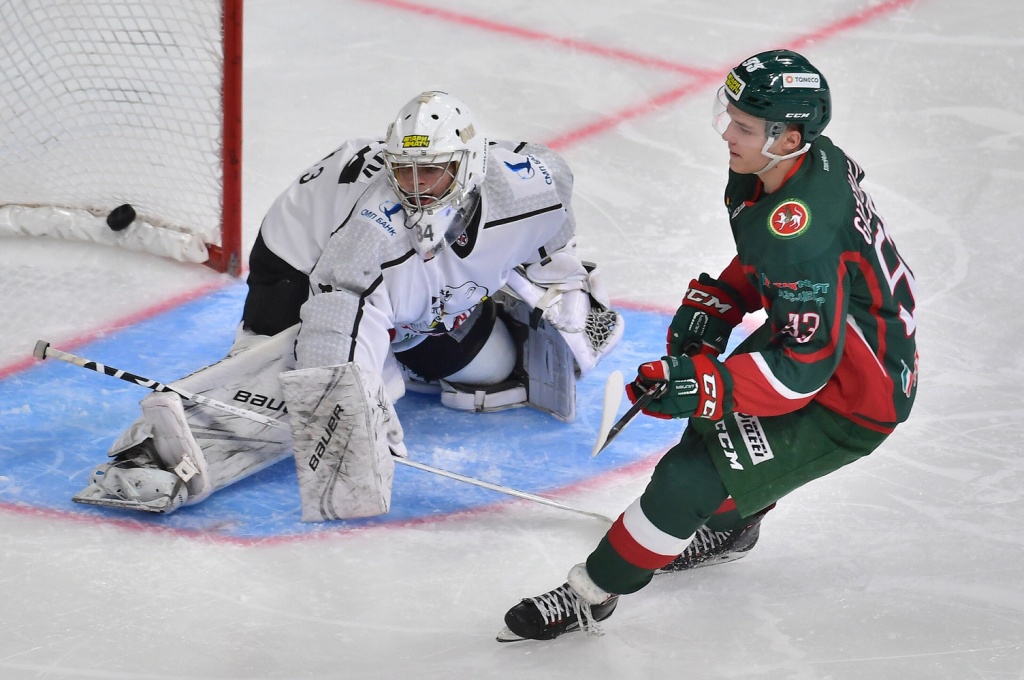 Irbis Kazan played hosts to Belye Medvedi Chelyabinsk. The game was close in the opening period of action and Kazan managed to get on the board. Late in the frame Ruslan Khasanov fired one past Dmitry Sharov. The game remained close in the following period but the score remained unchanged. Towards the end of the stanza a brawl broke out, after which Ilya Safonov and Artyom Zarubin got game-misconducts. The teams headed to the dressing-rooms for the second intermission with Kazan still leading by a narrow margin.

Early in the third period Chelyabinsk got called a penalty shot against them and Irbis top-scorer Danil Gizatullin successfully converted on it. Stepan Myslyayev quickly brought it back to a 1-goal game but the visitors couldn’t get the equalizer despite final push with the extra-attacker. Irbis win 2-1. 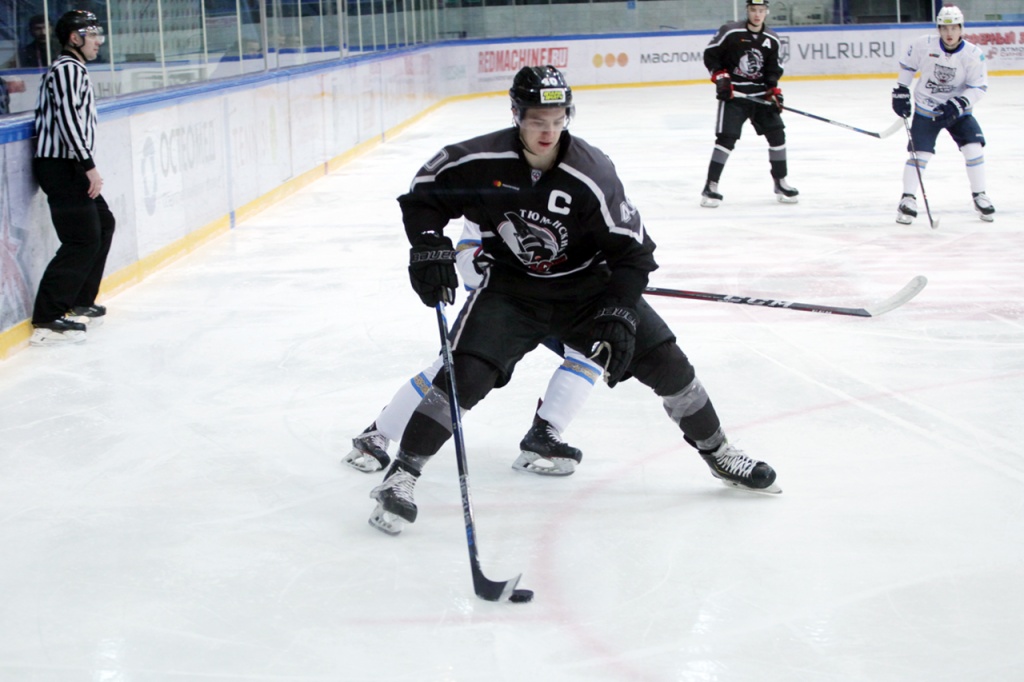 Tyumensky Legion faced Snezhnye Barsy Nur-Sultan on home ice. The teams exchanged goals in the first period of play. Nine minutes in Nikita Boyko finished off a lighting quick rush for Kazakhstan team. The ‘Legion’ responded with a powerplay tally – Artyom Pylayev converted on Snezhnye Barsy’s first penalty of the game. The visitors got in the lead in the last minute of the second frame. A huge defensive mistake led to a turnover and a snipe by Yusup Asukhanov, who gave Nur-Sultan a 2-1 lead after 40 minutes of action.

13 minutes into the third stanza Tyumensky Legion made it a 2-2 hockey game as their top-scorer Alexander Golovin skillfully beat the netminder in tight and forced overtime. Extra period solved nothing and it went to the shootout. Home team prevailed in hockey lottery – Golovin scored the winner.


Sarmaty couldn’t catch up to Sputnik 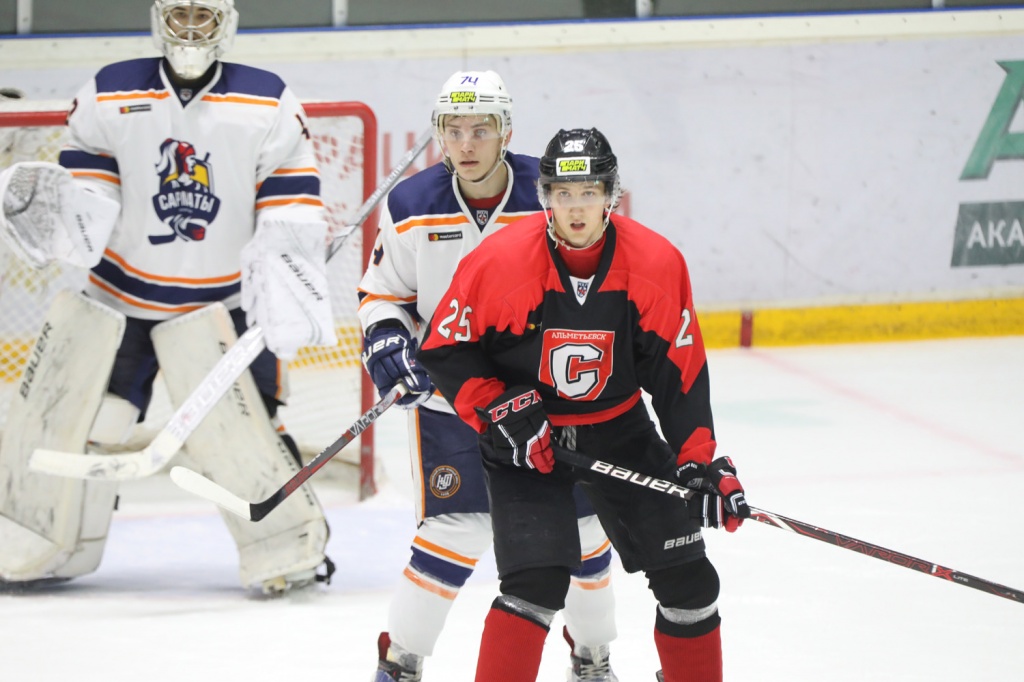 Home team did better early in the game. Sputnik Almetyevsk opened scoring less than three minutes in. Timur Zalirov sieved it through Anton Borodkin and then didn’t capitalize on several more scoring chances. The visitors brought it back to even midway through the period. Ivan Timashov scored on a delayed penalty call to beat Rail Nasyrov.

The teams traded goals after that as well – Nikita Savelyev responded to Mikhail Fadeyev’s marker. However, next goal came exactly a minute later – Sputnik got their third lead of the game as Andrei Sholgin found the back of the net. That goal was the last one in the game. The fans had to sit on the edge of their sits late in regulation. Both coaches used their timeout and Orenburg pulled their goaltender for the extra-attacker, but it changed nothing on the scoreboard. Sputnik win 3-2 for their second consecutive win on this home stands, while Sarmaty lose their third straight. 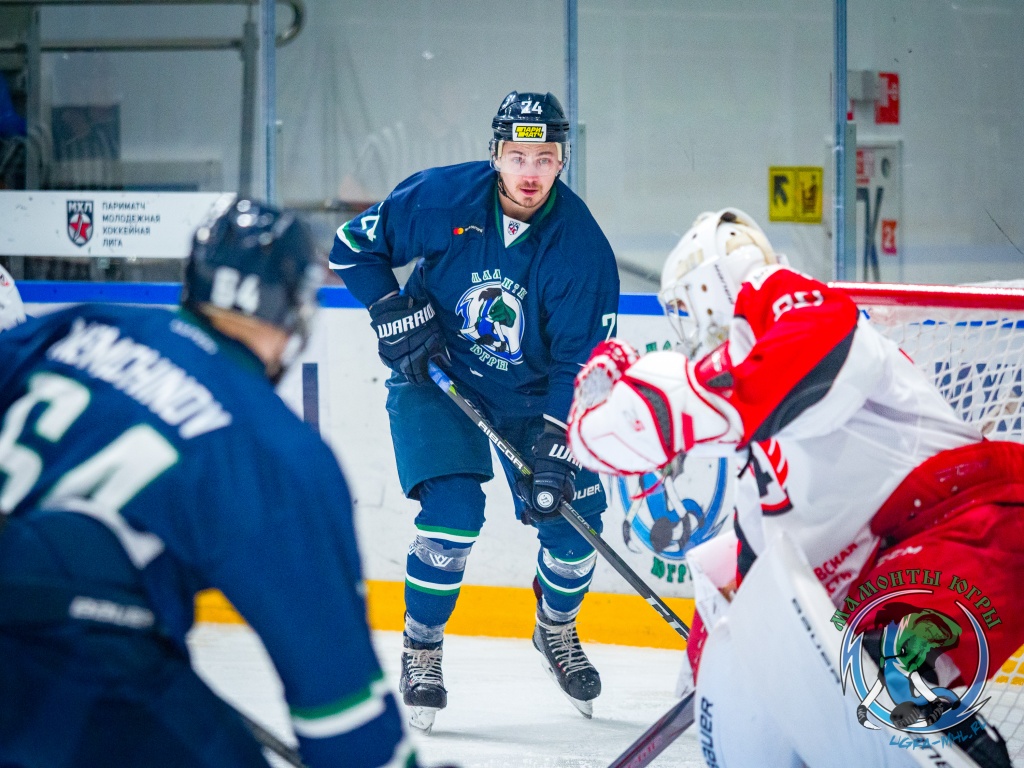 Avto Yekaterinburg enjoyed their second consecutive win in Khanty-Mansiysk. They almost repeated the final score (5-2) of the first game of the back-to-back series but came up one goal short. However, Mamonty Yugry had the momentum on their side throughout the game and outshot the opposition in every period. Viktor Burlutsky’s men took 11 shots in the opening period and managed to open scoring – Ivan Pavlyuk found his target. Avto players took just three shots but Ilya Stupin couldn’t stop Konstantin Suslov on one of them.

The game followed a similar scenario in the second period of action. Mamonty Yugry took 14 shots and got a tally from Evgeny Timoshenko, while Yekaterinburg converted one of their four shots into a goal. In the third stanza Georgy Romanov posted a perfect record and his teammates got the job done as well – Suslov scored his second of the game, while Daniil Zaitsev set the final score. Mamonty Yugry lose 4-2 and begin their home stand with two consecutive losses.


Ladiya lose to Reaktor on the road 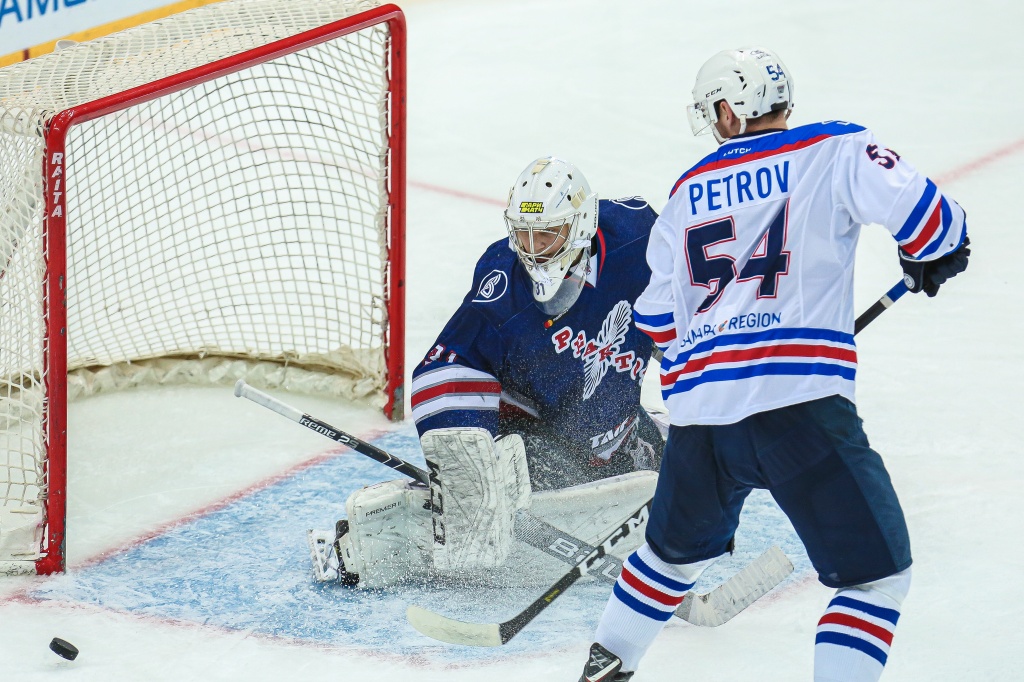 Reaktor Nizhnekamsk and Ladiya Togliatti are not neighbors in the standings but just one point separated them prior to the game. Nizhnekamsk managed to score a quick goal in this one – Bulat Shafigullin bubbled the net just two minutes in. Notably, Shafigullin played his first game of the season. Toglaitti responded with a marker by Veniamin Tsitser, who got his second of the year.

Nizhnekamsk pulled ahead once again in the second period as they converted on a power play – Ilya Paranin got the marker. Daniel Butsayev further improved the lead. The score remained unchanged after that, even though Togliatti had a lot of power play attempts. Late in regulation they also got several minors and Reaktor worked the clock en route to a 3-1 win.