ORG Junior
News
Maxim Krovyakov – 2021/2022 Playoffs Most Valuable Player
SKA-1946 win first championship in their history! Michkov scores game winning lacrosse-style goal
Krasnaya Armiya vs SKA-1946 in the finals! JHL deciding games schedule
“I’ll try to make it to the senior team.” Yaroslav Likhachyov finished his JHL career with a team’s record
The talent of the CSKA system rocks in the JHL playoffs. Agatha Christie helps Prokhor Poltapov prepare for games
“It’s a shame that three years in the JHL flew by so fast” – Matvei Kokovin lost a bet to Alexei Shevchenko as the White Bears failed to qualify to the playoffs
“I gave myself a choice: either to get stronger and move on, or to quit hockey” – SKA-1946’s leader talks about his season, social media, and hockey life
“Nizhny Tagil is not what it was ten years ago” – Vasily Atanasov about his hometown and his play with Mamonty Yugry

Six regular season games took place in Parimatch Junior Hockey League on October 14th. The gameday kicked off in Omsk and finished in Dmitrov. We take a look at all Monday games in this review. 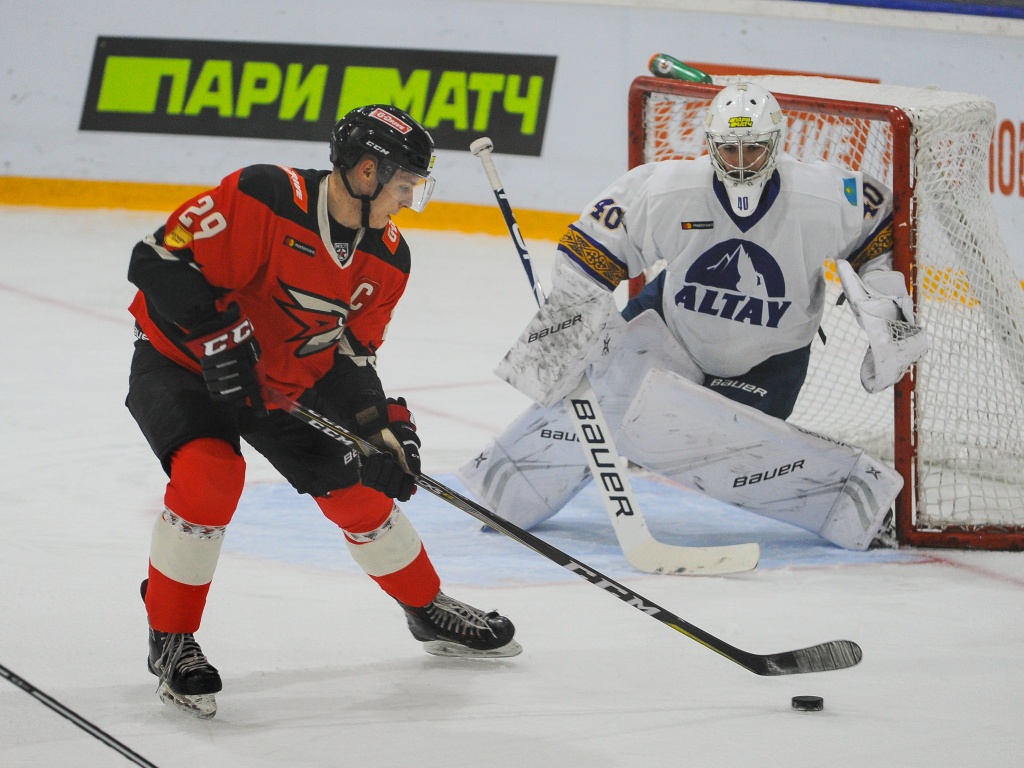 Omskie Yastreby faced red-hot Altay Ust-Kamenogorsk on home ice. The visitors came into this one riding a 4-game winning streak and as one of the top teams of the Eastern Conference. First goal of the game took place late in the opening period – Altay top-scorer Stas Petrosyan once again put his skill on display. He muscled his way out from the corner, skated to the slot with defenseman on his back and roofed it past Georgy Dubrovsky.

Nothing changed on the scoreboard in the second frame. The ‘Hawks’ had the momentum on their side, spent some time on a power play couldn’t find the equalizer. Only after Artyom Ipatov got a minor in the third stanza did Semyon Astashevsky make it a 1-1 hockey game. The teams opted for defensive-minded hockey for the rest of the game. Regulation and overtime solved nothing so the game went to the shootout and Ust-Kamenogorsk prevailed – Stas Petrosyan and Yegor Sofyin converted on their attempts.


Sharipov scores in OT, wins it for Sputnik 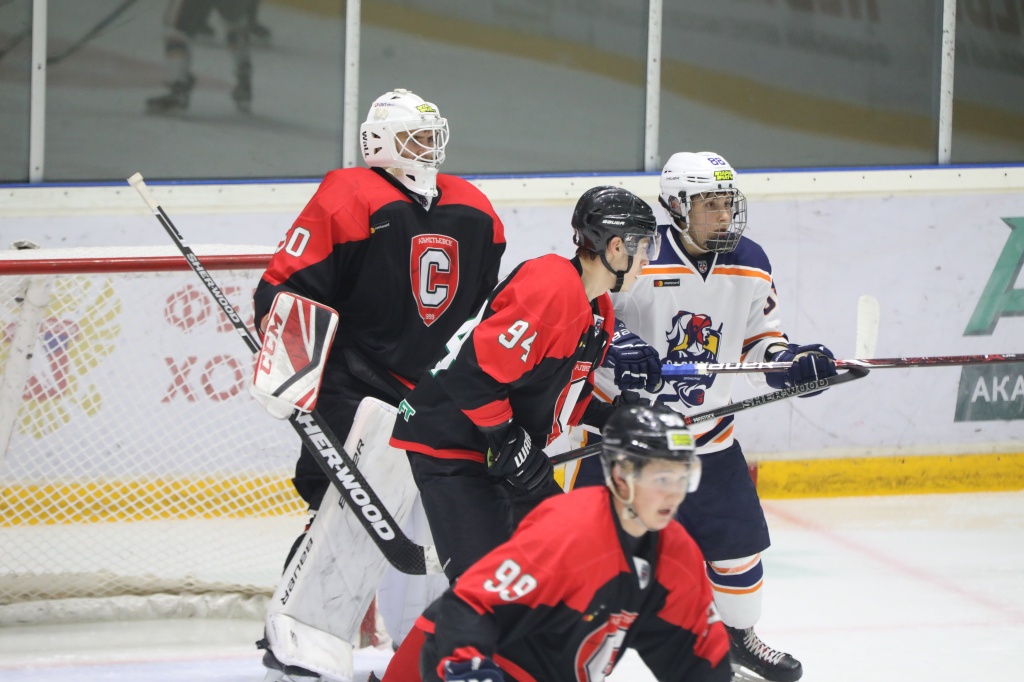 Sputnik Almetyevsk faced Sarmaty Orenburg on home ice. The teams are neighbors in the standings – Orenburg were just a point ahead of Almetyevsk. Home team created more scoring chances in the first period than the opposition but it was Sarmaty who opened up the scoring – Pavel Sakharov capitalized on a power play attempt. Sputnik had a rough start of the second frame as they had to kill off two minors but when Orenburg went down a man, Danila Zharov scored on the ensuing man-advantage for Almetyevsk.

Sarmaty played cautious hockey in the third period but the score remained unchanged and the game went to overtime. Almetyevsk prevailed in 3-on-3 hockey. Three minutes into the extra frame Rail Sharipov found the back of the net and Sputnik enjoyed a hard-fought victory on home ice.


Avto come back from behind in Khanty-Mansiysk 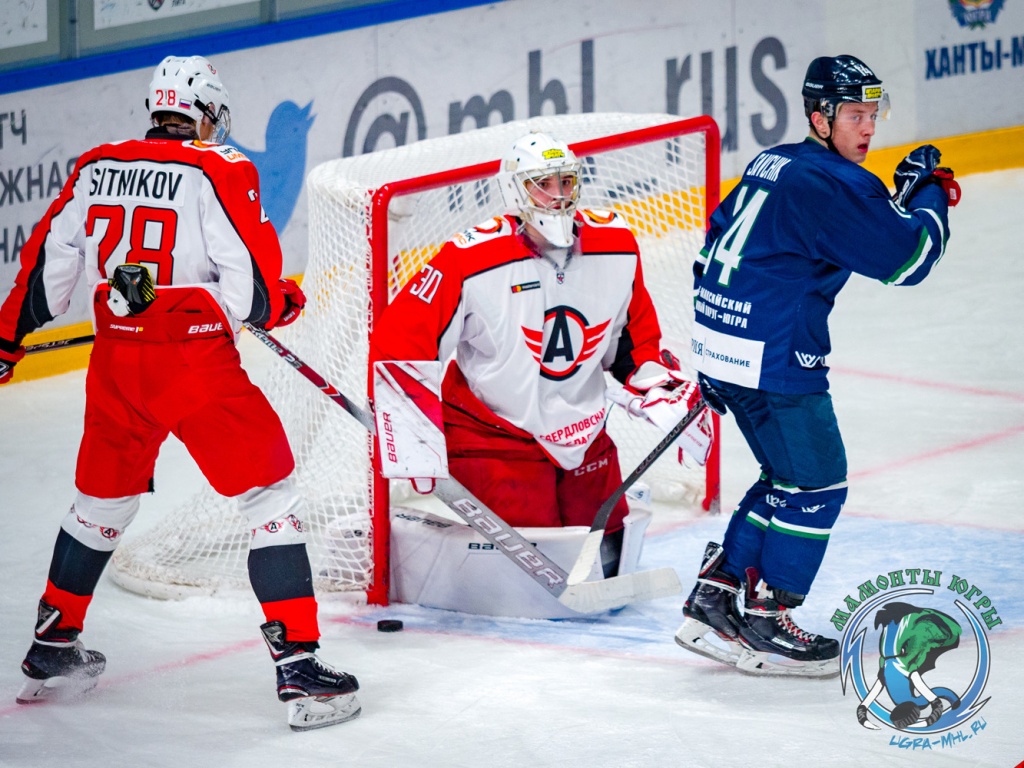 Mamonty Yugry, who currently uncharacteristically find themselves in the bottom half of the table, defended the ice against Avto Yekaterinburg. First period of play between silver and bronze medalists of last season featured no goals, although Khanty-Mansiysk spent a lot of time in the offensive zone and had two power play opportunities, while Yekaterinburg had one. The goals came in the second period. Matvey Neganov scored for the ‘Mammoths’, Alexander Fyodorov brought it back to even and with six seconds on the clock Ilya Loza put the visitors in the lead.

Early in the third stanza the teams traded powerplay markers – Anton Chufarov scored for Yekaterinburg and Artyom Faizullin netted one for Khanty-Mansiysk. The scoring stopped there for the home side but Avto players got two more past Ilya Stupin – Sergei Sibiryakov and Vladislav Bukharov got the tallies. Avto win 5-2 in Khanty-Mansiysk. 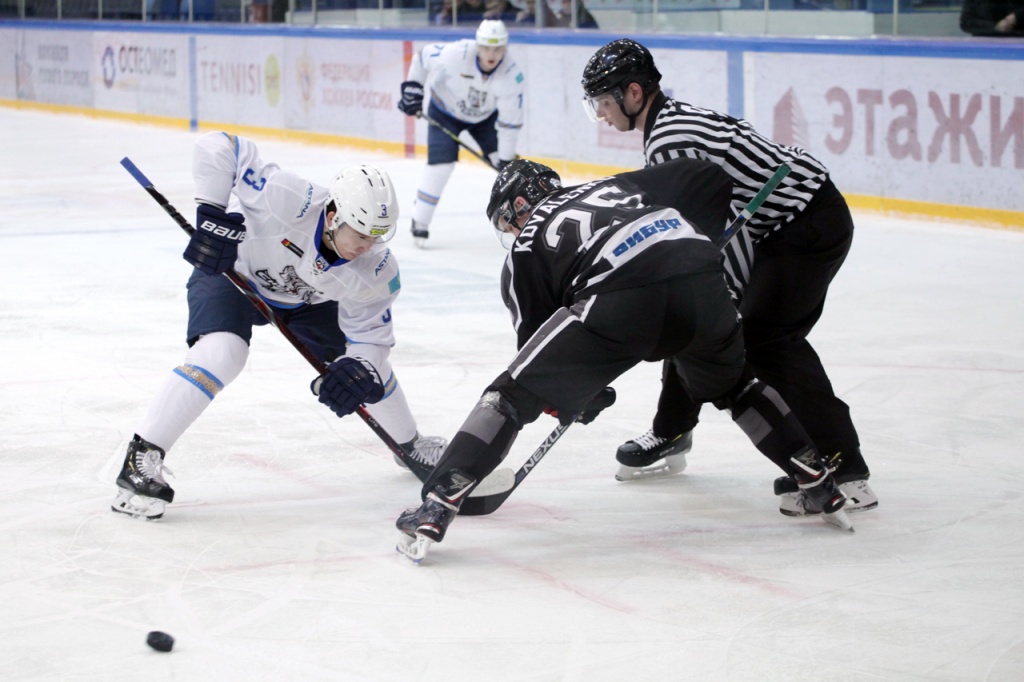 Two Eastern Conference underdogs went up against each other in Tyumen. Snezhnye Barsy Nur-Sultan, who are currently second last in the conference with seven points, came to visit Tyumensky Legion, who are dead last in the East with just three points. Both teams rested for four days so the opening ten minutes of play featured no scoring chances and almost no shots – home team took the only shot on net on a power play attempt.

As for Snezhnye Barsy, they scored on their very first shot of the game. 11 minutes in Dias Atakhanov received the puck from the corner, beat two defensemen and elevated the puck over Pavel Guschin’s pad. The ‘Legion’ created an odd-man rush in the following shift but captain Artyom Pylayev didn’t even take a shot away.

Interestingly enough, there was no intermission between the periods. The game was paused 13 minutes due to technical issues and after the 20 minutes expired, the teams just swapped sides and carried on playing. Thus second period lasted for over 26 minutes. The visitors ran out of gas and Vladimir Gusev’s side grabbed the momentum. Kazakhstan team rarely exited their defensive zone, while Tyumen were peppering them with shots, most of which were wide of the net and none went past Maxim Pavlenko.

Despite the fact that home side had the momentum, Snezhnye Barsy still got the next goal of the game. Vladislav Saiko won the battle for the puck at the boards, skated from the corner to open ice and sniped it top-shelf with an incredible shot.

Key moment of the game came in the last minute of a prolonged period. First Stanislav Alexandrov converted on a power play with 52 seconds on the clock and got his second of the game, and then Sergei Pryakhin improved the lead to five goals for Snezhny Barsy. Incidentally, after Nur-Sultan’s third goal Guschin was replaced by Stanislav Pylayev between the pipes). Tyumensky Legion scored a consolation goal in the third period but that wasn’t enough to get back in the game.

With this 6-1 win Snezhny Barsy increase the gap between them and last place in the East to six points. 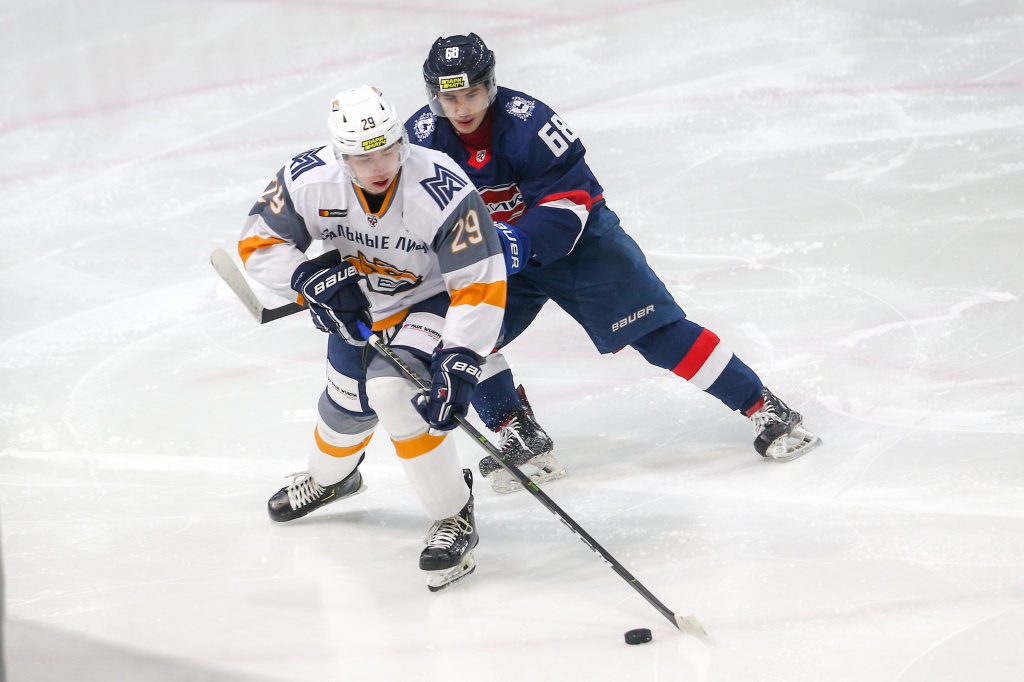 The visitors came out roaring for the opening period. Chayka Nizhny Novgorod killed off a minor by Denis Vengryzhanovsky but allowed a goal seven minutes in. Ruslan Gospodynko broke away and pockets it between the wickets of Yegor Gromovik with a nice wrister. Stalnye Lisy Magnitogorsk doubled their lead before the intermission. Chayka defenseman failed to glove the puck down, it was picked up by Magnitogorsk and Dmitry Sheshin left Gromovik no chance from point-blank range.

Nizhny Novgorod turned things around in the following 40 minutes of play. Chayka outshot the opposition and kept Nikolai Shashkov under constant pressure. With less than a minute remaining on the clock until second intermission, Yan Kopylov brought Chayka back to within one and early in the third stanza German Poddubny leveled it on the scoreboard.

The game was winding down to overtime but with ten seconds until the final buzzer Chayka defenseman Andrei Zamurayev lost his balance and fell down at his own blue line. Stalnye Lisy forward Edgar Varyagyan pounced on the loose puck and scored the game-winning goal. Nizhny Novgorod coaching staff called timeout but they ran out of time looking for the equalizer. 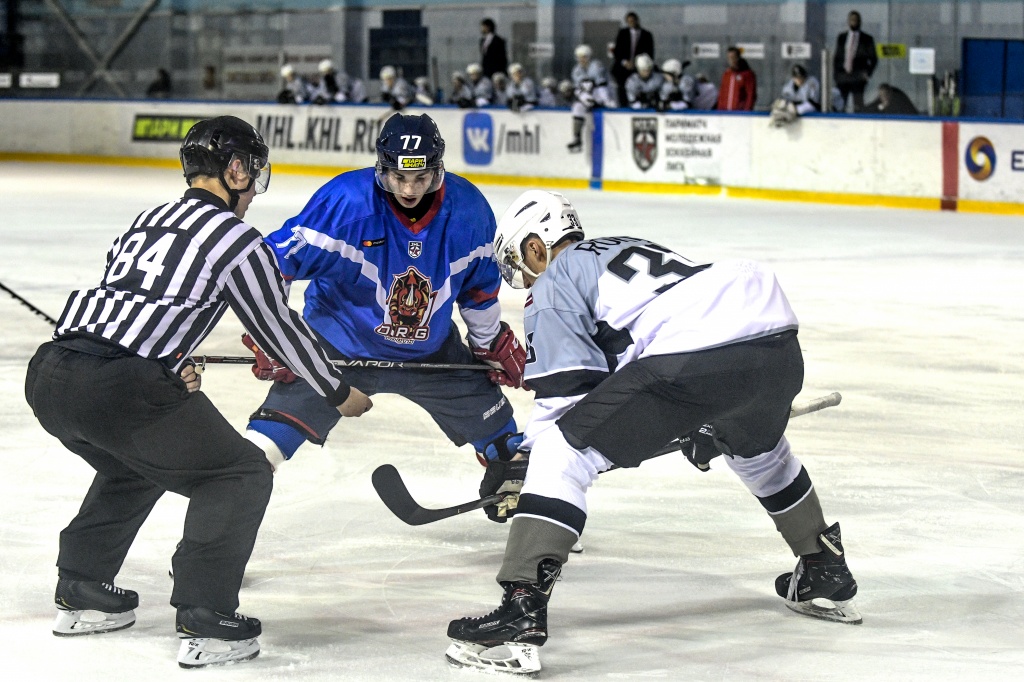 HK Riga scored just once in the opening period of action – a bit of a fluke goal by Janis Svanenbergs put the visitors in the lead. Latvian side almost never let ORG Junior Beijing out of their defensive end in the second period. Raimonds Vilkoits’ team took 28 shots on Haoran Hu’s net, while Janis Voris had to face just three. Home team cracked under such pressure. First Arturs Brikmanis improved the lead for Riga, then Svanenbergs scored his second of the game and Nikita Matejko essentially put it out of reach. Head-coach Alexander Barkov called timeout but didn’t swap his netminders. Due to illness of one of ORG goaltenders, defenseman Alisher Mubarakshin was dressed as the backup for the game.

ORG managed to even out the game somewhat in the third period but Latvian team went on to score to more goals. Richards Grinbergs got one tally and with 28 seconds on the clock Bulat Galimov set the final score. With this 6-0 win HK Riga are now tied with Almaz Cherepovets for third place in the Western Conference, while ORG Junior lost their 16th game in a row.