Eight regular season games took place in Parimatch Junior Hockey League on October 8th. The gameday kicked off in the East where 14 teams hit the ice, while only two St. Petersburg clubs crossed sticks in the West as Dynamo faced their rivals SKA-Varyagi. We take a look at all games in this review. 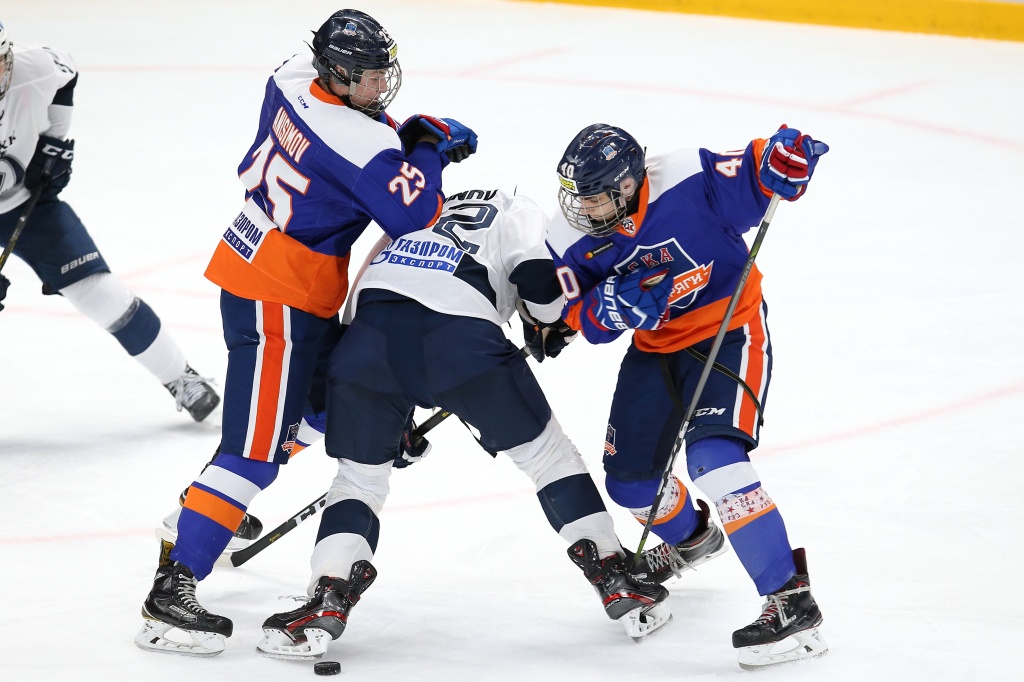 Last game of the day was a rivalry matchup in St. Petersburg. SKA-Varyagi faced JHC Dynamo at SC Hokkeyny Gorod. First goal came eight minutes in – Artyom Levinsky skated down the right wing, passed it across the ice and Matvey Kabush fired a one-timer past Makar Chufarov. Dynamo managed to respond only midway through the second period – Gleb Shaborshin snapped it home from the left wing.

Third period was key in the game. Seven minutes in Daniil Paranichev wired it in with a shot from the left circle – Pavel Davydyuk couldn’t do anything about it. SKA-Varyagi picked up the pace but allowed a counter-attack – Sergei Alexandrov stole the puck at the right wing and set the final score. Dynamo win 3-1. 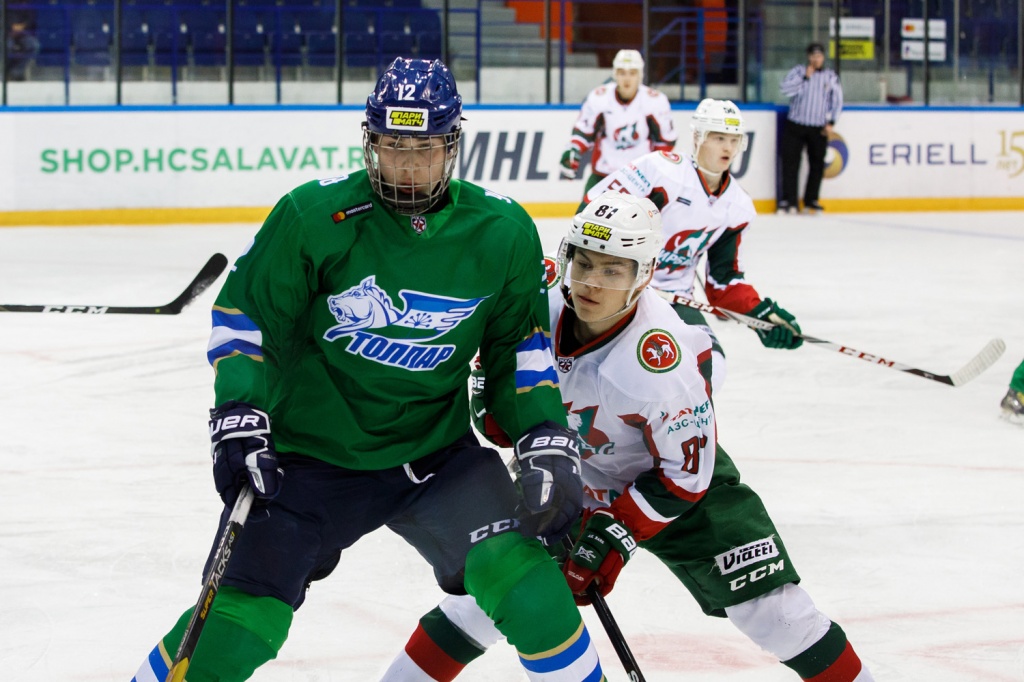 The teams played with caution early into the rivalry game and created their first scoring chances only midway through the period. Irbis Kazan looked like a better team at first, especially given their two consecutive powerplay attempts (on neither of which they were able to convert) but Tolpar Ufa grabbed the momentum towards the end of the period and put Artur Akhtyamov to work.

Home team continued having trouble with discipline in the second period. Irbis capitalized on their fourth man-advantage of the game and took the lead. Tolpar kept spending a lot of time in the offensive end of the ice and Dmitry Braginsky had to sweat buckets. However, he managed to stay perfect after 40 minutes of action.

Ufa were able to convert their momentum into goals in the third stanza – Denis Goryukhin tied the game up early into the frame. It was a milestone marker as it was 55,000th tally in Parimatch Junior Hockey League regular seasons. Then Danil Alalykin scored his first goal since returning from Salavat Yulaev as he converted on a powerplay. Ilnaz Gazimov’s tally put it out of reach for Kazan.

Irbis pulled their goaltender for the extra-attacker late in regulation but Ilnaz Zagitov’s men couldn’t get anything else past Braginsky, who enjoyed his 30th career JHL win. Alalykin scored on the empty net but it was waved off as officials determined the puck went in after the buzzer. 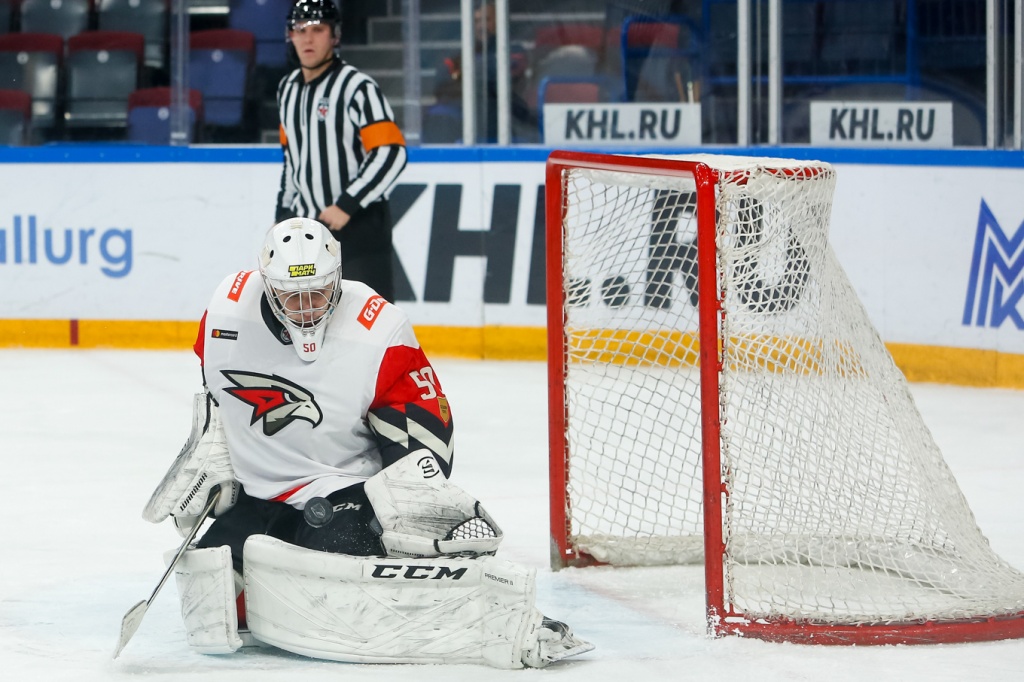 This was a special game for Stalnye Lisy head-coach Yuri Panov as he had joined Magnitogorsk from Omskie Yastreby in the off-season. This was his first game against the team he had coached for several seasons.

The teams opted for a fast-paced game from the beginning and there were very stoppages of play, although with very few scoring chances. The visitors got in the lead with six minutes remaining to be played in the period – Alexander Yaremchuk stole the puck from Semyon Buyvan at the red line, skated past Ruslan Gospodynko, shielding the puck and put it past Nikita Kamyshnikov.

Omskie Yastreby had trouble exiting the zone in the final minute of the stanza. Home team also came out hard for the second period – Nikita Dianov had to make several huge saves, the flashiest of which were on Pavel Dorofeyev and Ilya Nikolayev.

Five minutes into the frame Magnitogorsk got a penalty and the ‘Hawks’ converted just a few seconds into it – a mighty clapper from a circle hit Kamyshnikov in the mask and the goaltender couldn’t react to Daniil Berestnyov’s shot on the rebound.

‘Steel Foxes’ created good scoring chances but Dianov was in the zone and stopped one shot after another. Home team struggled and started taking penalties – Pavel Dorofeyev got a 10-minute misconduct for unsportsmanlike conduct. Perhaps, that motivated Magnitogorsk. With 90 seconds on the clock 15-year-old Danila Yurov tipped Nikolayev’s shot to make it a 1-goal game. That was his first career Parimatch Junior Hockey League tally.

The game followed the same road in the third stanza as home team still had the momentum on their side. On one possession play Vladimir Mashkov passed it to Pavel Pchalin, who whipped it home top-shelf on the short-side past Kamyshnikov, setting the final score. 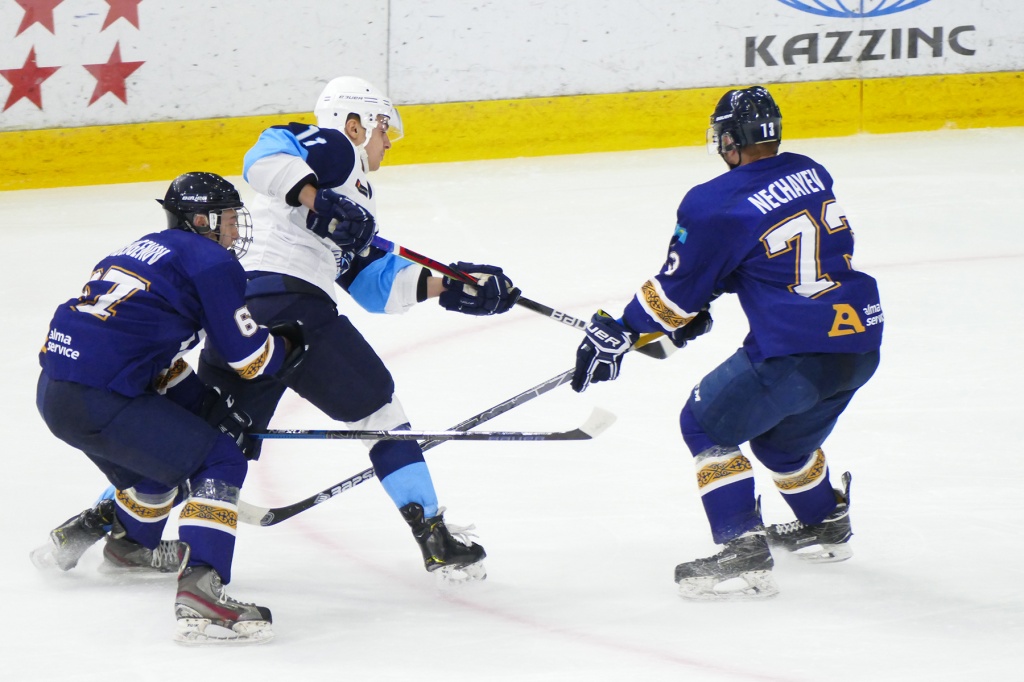 The teams played fast-paced hockey in the opening 40 minutes of the game but managed to break the deadlock only 12 minutes into the second period of action. Altay Ust-Kamenogorsk’s top-scorer Stas Petrosyan received a stretch pass, broke away for two defensemen in a footraced, skated in on Vladislav Scherbakov and scored. A minute later Petrosyan got another powerplay chance and this time Denis Budenchuk put it in on the rebound. However, the goal was waved off due to goaltender interference. Nevertheless, home team still doubled their lead before the intermission – German Shaporev converted on Mikhail Konkov’s penalty.

Sibirskie Snaipery came out hard for the third stanza and a few minutes into brought it down to a 1-goal differential. Dmitry Ovchinnikov put it past Vladislav Nurek. Novosibirsk kept creating scoring chances right till the final buzzer but failed to find the equalizer.

With 45 second remaining to play in regulation Dmitry Gogolev decided to pull his goaltender for the extra-attacker and the tension turned into a mass brawl. As a result of which, Altay captain Stas Petrosyan got a game-misconduct. With 20 seconds on the clock the teams engaged in yet another line-brawl, which was joined by goaltender Scherbakov, who got a 10-minute misconduct.

The brawls had no effect on the final score. Altay enjoyed their third consecutive win, while the top team of the Eastern Conference, Sibirskie Snaipery, lost their fourth game out of the past seven. 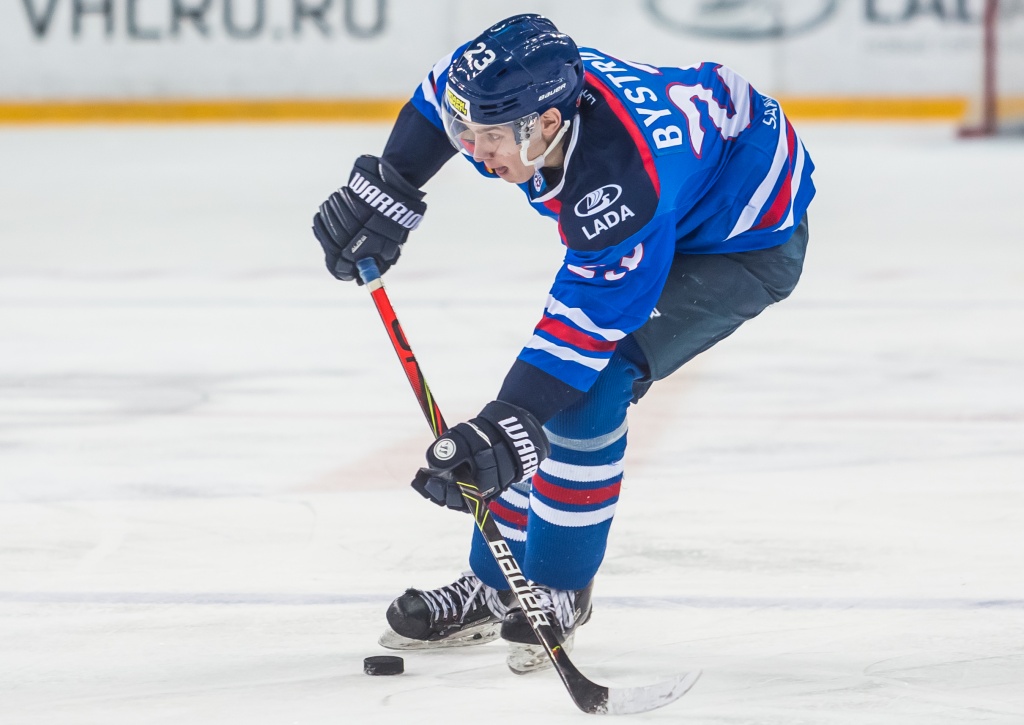 The fans didn’t get to see any goals in the opening period of play, even though both teams had powerplay opportunities. Both Ladiya Togliatti and Mamonty Yugry had their scoring chances but Artyom Zabrodin and Nikita Mukhametdinov, who was playing in his second game of the season (4th in JHL career), were on top of their game.

The visitors won the second frame. Early into it the ‘Mammoths’ converted on a powerplay – Maxim Kirileychenko took a low-shot off the wall and the puck went into the net under the pads of Zabrodin, who went down too late. Shortly before the intermission Kirileychenko scored another one – this time he used chaos in front of the net to his advantage and stuffed the puck in.

Ladiya goaltender made up for his mistakes in the third stanza – not only Zabrodin didn’t allow a single goal, he also participated in the only marker his team managed to eke out. He passed it to Fyodor Svechkov, who streaked down the win and solved Mukhametdinov. Home team spent a lot of time in the offensive end after that, including on several powerplay attempts, pulled their netminder for the extra-attacker and yet failed to find the equalizer. Kirileychenko completed his hat-trick with an empty-netter to seal the deal.

Mamonty Yugry win 3-1 and get their revenge for losing the day before. 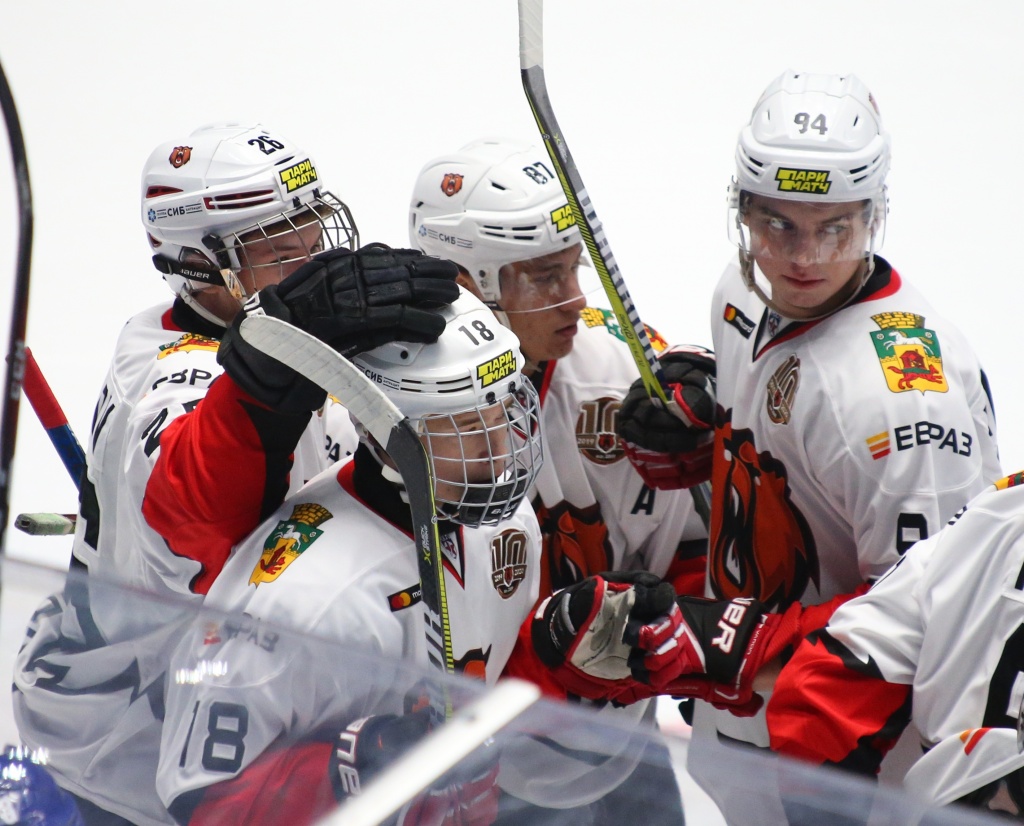 Snezhnye Barsy played hosts to Kuznetskie Medvedi in Nur-Sultan, Kazakhstan. Novokuznetsk managed to score a quick goal – just two minutes into the game Alexei Golubev sent one past Roman Kalmykov. Home side responded 13 minutes later as they converted on their initial powerplay attempt of the game – Stanislav Alexandrov found the back of the net. With 30 seconds on the clock the visitors got a penalty shot called against them but Dias Atakhanov couldn’t beat the netminder.

‘Snow Leopards’ did take the lead as Alexandrov scored another one on a powerplay. However, Kuznetskie Medvedi converted on their scoring chances better before the second intermission. Top-scorer of the ‘Bears’ Denis Sizikov made it a 2-2 hockey games and late in the frame Kirill Shumilov added a tally of his own. Home team tied it up six minutes into the third period as Yusup Asukhanov put it in. Regulation and overtime solved nothing, so the game went to the shootout and Novokuznetsk prevailed to win the extra point. 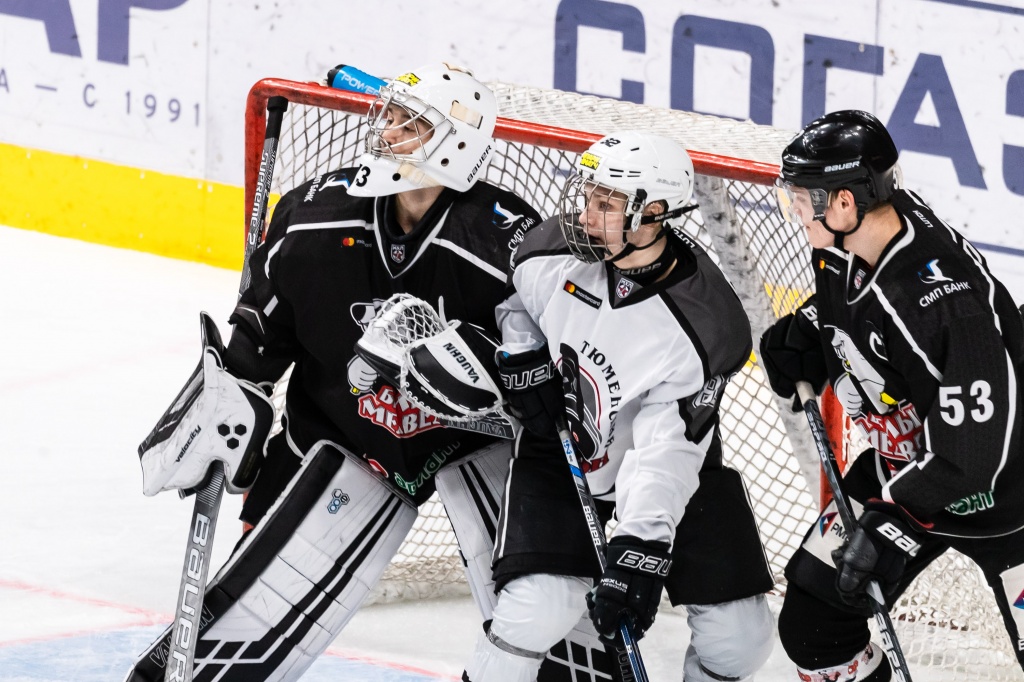 Belye Medvedi Chelyabinsk defended the ice against Tyumensky Legion. Chelyabinsk grabbed the momentum right from the get-go, forced their opponents to take a penalty, set camp in the offensive zone and opened up the scoring. Arkady Aksyonov sent it past Danila Zinovyev with a great one-timer. Home team continued to dominate, while the ‘Legion’ took just five shots on Viktor Selivyorstov. Tyumen did find the equalizer – Danil Lyapustin scored on a rare counter-attack as he found a tiny opening between goaltender and the pipe.

‘Polar Bears’ got another eight minutes into the second period – Alexei Kapustin netted one on a rebound on a delayed penalty call. Home team exploded in the third period. Kirill Kadyshev scored another one on a rebound and then 16-year-old Mikhail Goryunov-Rolgizer scored his debut Junior Hockey League goal in his first game – the tally came midway through the period. Belye Medvedi take it 4-1 on home ice. 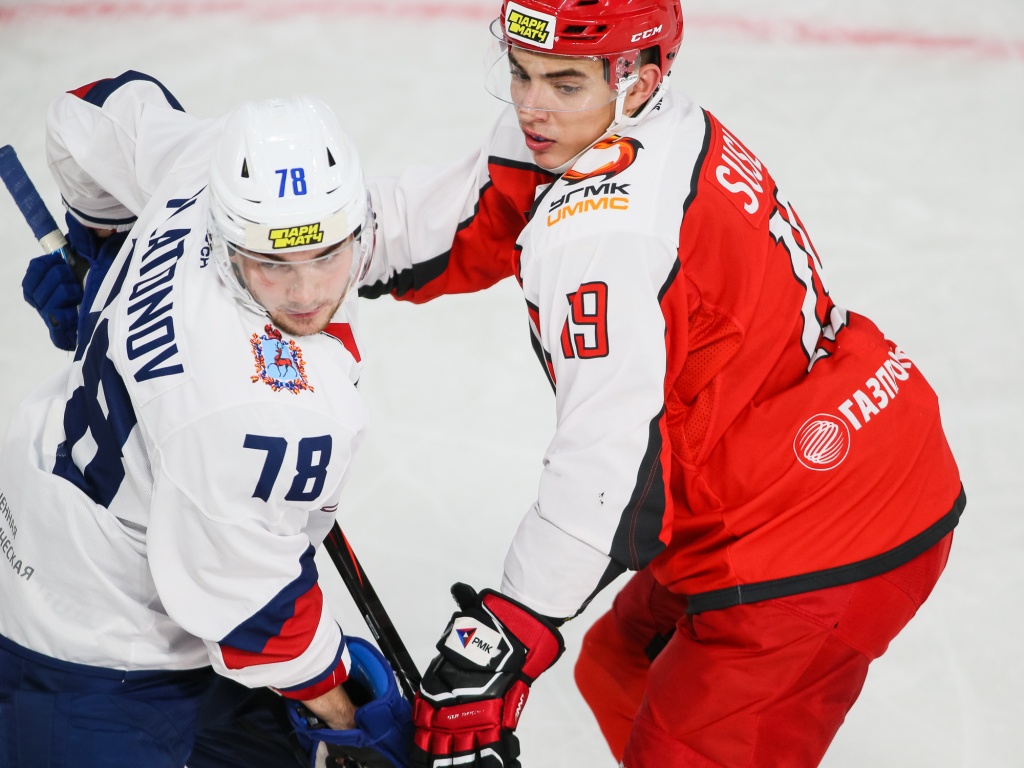 Chayka Nizhny Novgorod went on the road to Yekaterinburg and didn’t get off to a great start at CEC Uralets. Kirill Buynich got a 2-minute minor for holding and Danila Okhov opened scoring with a deflection in the slot. The visitors responded five minutes later – Danila Platonov received a pass from behind the net and sent it in on the far post.

Nizhny Novgorod looked better in the second frame but as it often happens in hockey, it was the other team that found the back of the net. Yekaterinburg capitalized on Yegor Alexeyev’s minor. Yegor Gromovik stopped Yuri Salov’s shot but couldn’t do anything with Alexander Fomintsev, who scored on the rebound. Nizhny Novgorod went for one final push late in regulation but it led to nothing as they lost 2-1 on the road.