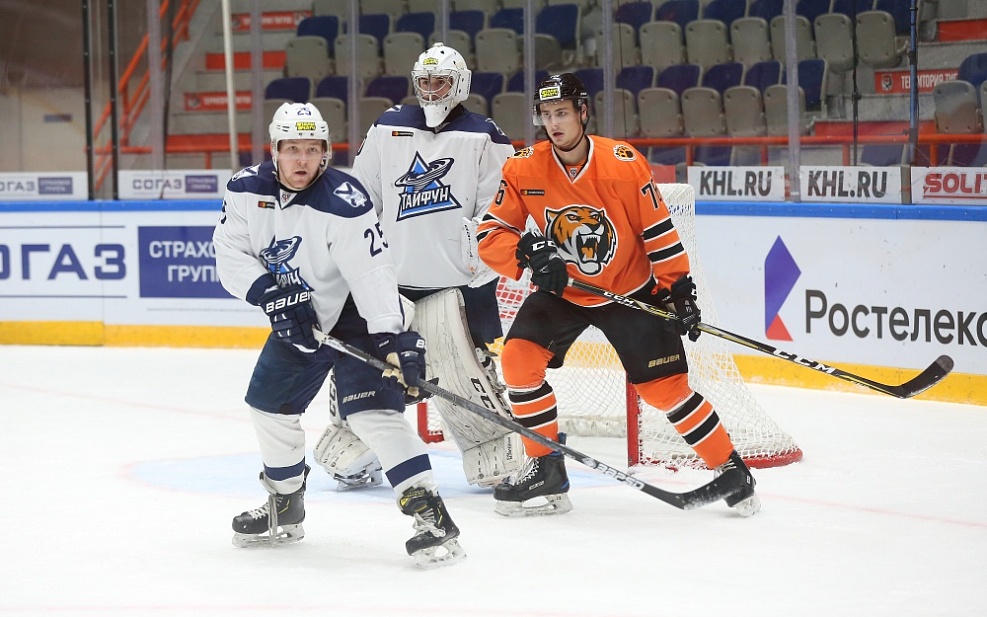 Nine regular season games took place in Parimatch Junior Hockey League on October 7th. The gameday kicked off in Khabarovsk to end in Dmitrov. We take a look at all Monday games in this review. 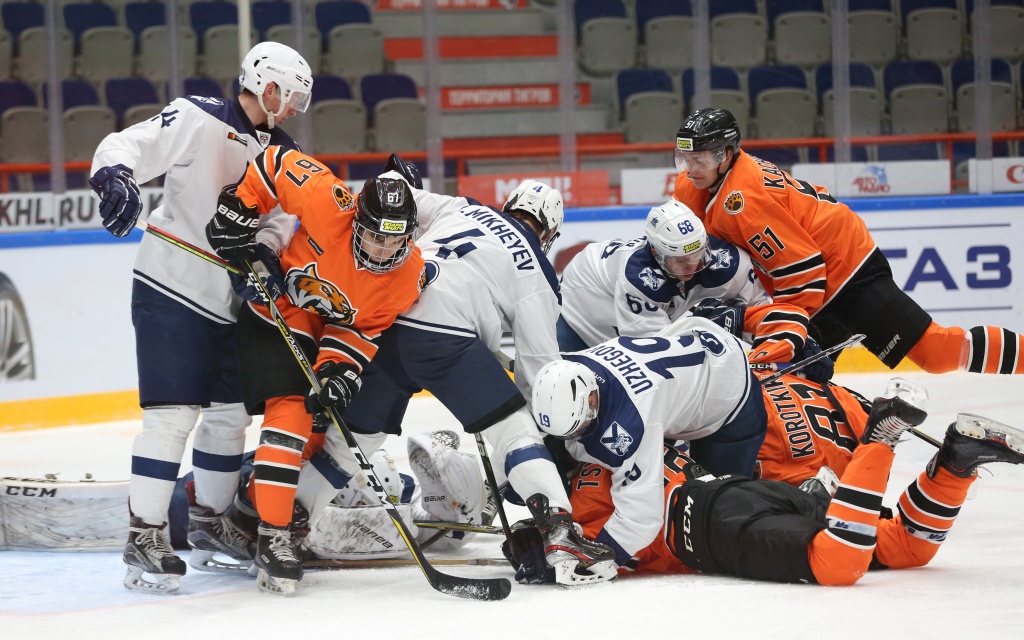 Amurskie Tigry Khabarovsk faced Taifun Primorie Region in the second game of the back-to-back series between Russia’s Far East’s rivalry. The latter went into the bout as one of the top teams of the Western Conference. The visitors proved in the opening period that they should be considered as playoff contenders this year. Khabarovsk were down 3-0 17 minutes into the game as Leonid Pasmanik and Ivan Bunov scored at even-strength, while Dmitry Kozlov got a powerplay tally. Just as Evgeny Babushkin got a goal back for the ‘Tigers’, Ivan Lapshin restored the 3-goal lead with another powerplay marker.

Babushkin scored his second of the game before the second intermission and Khabarovsk went into the third period down by just two. They got back to within one eight minutes into the final stanza. Primorie Region had to pay for another penalty – Yegor Antonov made it a 4-3 hockey game, ensuring a thrilling finish. Taifun got another penalty with a minute remaining to play in regulation but managed to pull through and won four points in the series against their arch-rivals. 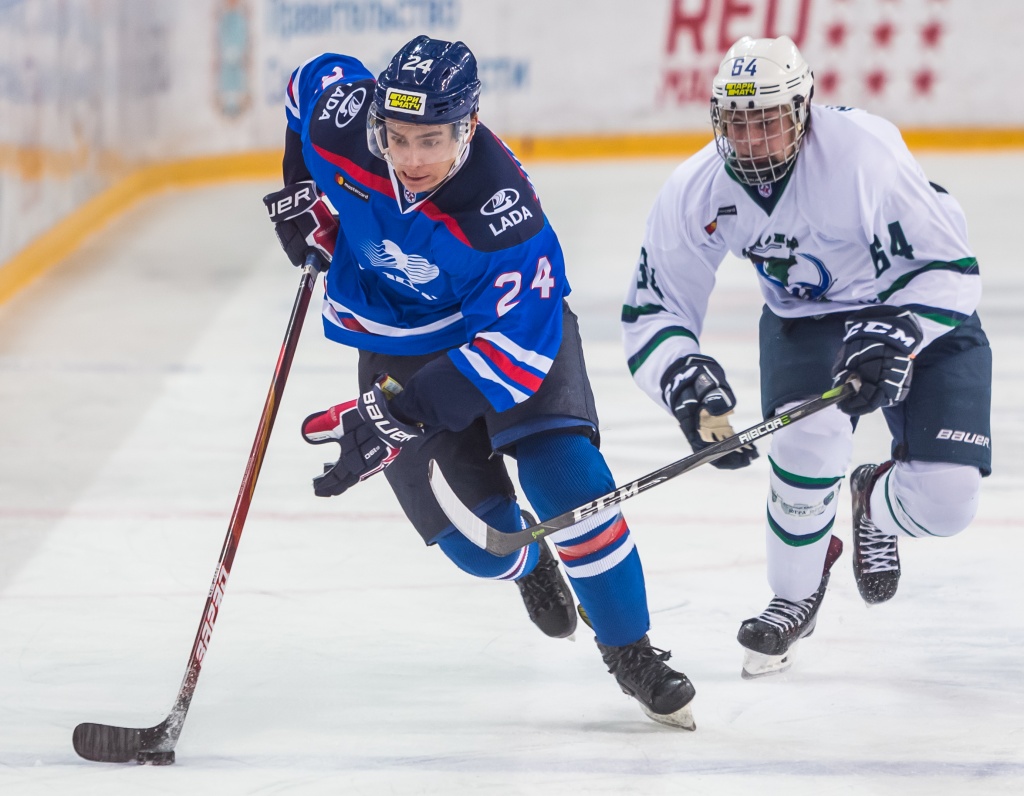 Ladiya played hosts to Mamonty Yugry in Togliatti. Home side opened scoring midway through the first period of action – Konstantin Kuzmaul stopped Milan Zinatullin’s shot but couldn’t save his team on the follow up chance as Timofey Doba scored on the rebound. Khanty-Mansiysk managed to get back even midway through the second frame as Kirill Rudenko found the back of the net. Five minutes later the forward scored his second of the game on a screen-shot to capitalize on man-advantage. The teams headed to the dressing-rooms tied 2-2 after 40 minutes of play – Stepan Steshenko tapped one home off assist by Stanislav Rangayev.

In the final third of regulation home team edged the opponent. Yegor Bystrov put his team back in the lead seven minutes into the period with a shot from point-blank range. Fyodor Svechkov scored another one as he pocketed it 5-hole on Kuzmaul. Ladiya win a hard-fought game 4-2 on home ice.

Manin and Beryozkin score twice each, Loko win in Chekhov 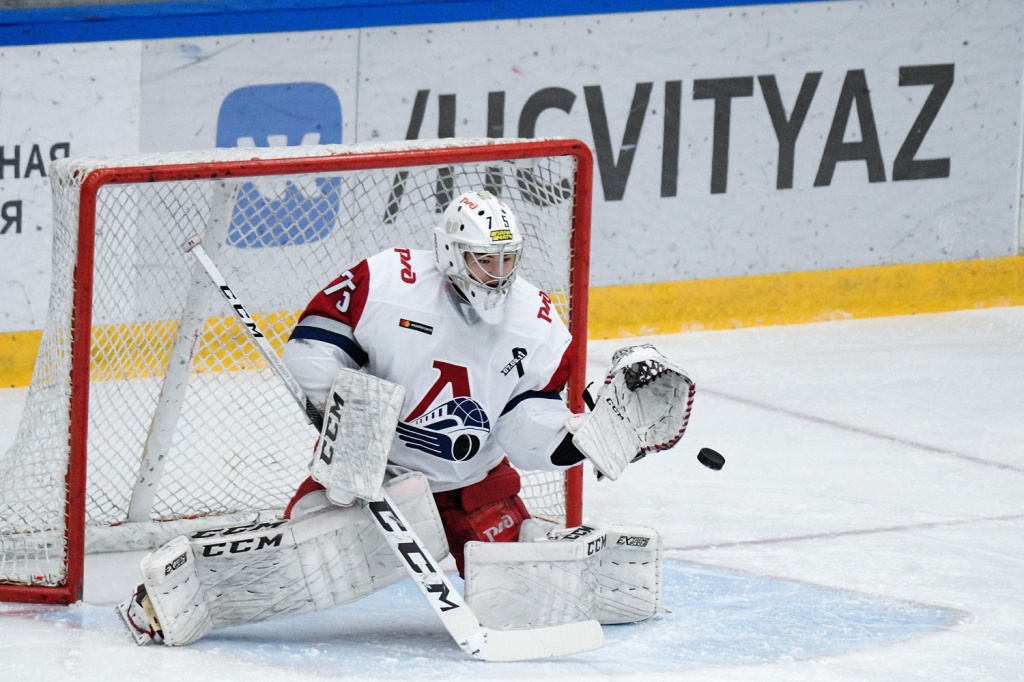 Russkie Vityazi once again defended the ice against reigning Kharlamov Cup champions Loko Yaroslavl. Chekhov managed to score a quick goal in this one – Zakhar Bardakov found the back of the net three minutes in. Five minutes later Maxim Beryozkin brought it back to even and shortly before the intermission, Yegor Manin, who leads Yaroslavl in points, put the visitors in the lead. Early in the second frame Ilya Nikolayev improved the lead to 3-1, but got into trouble a few moments later as he got a 10-minute misconduct for checking to the head. 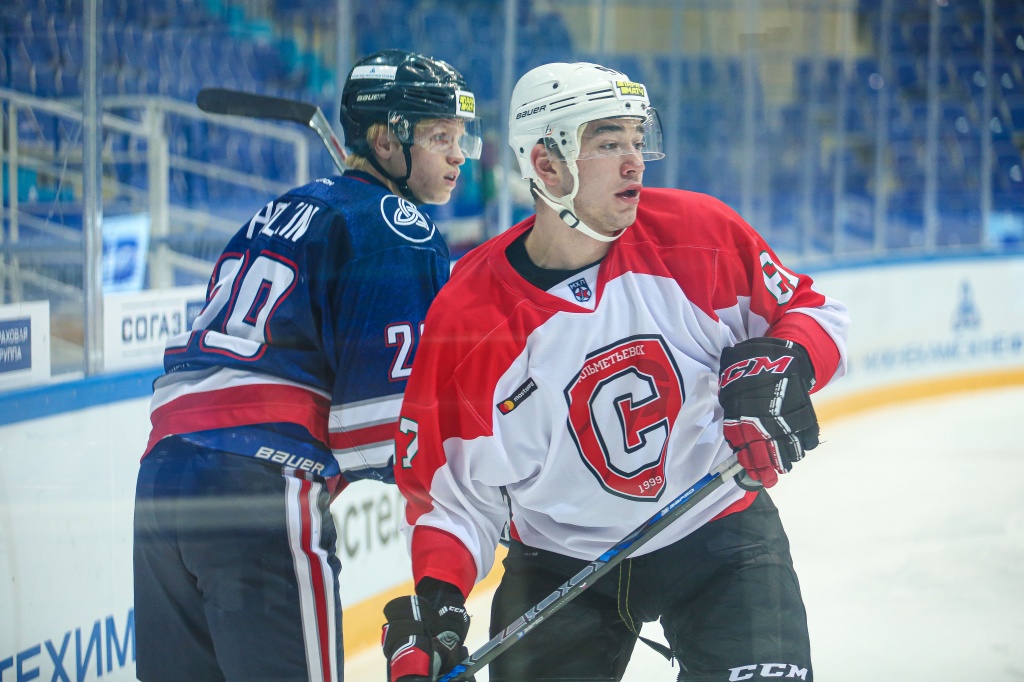 Tatarstan rivalries ramble on in Parimatch Junior Hockey League. This time Reaktor faced Sputnik Almetyevsk in Nizhnekamsk. The fans were treated to just a single goal in the opening period – Daniel Butsayev sent one past Rail Nasyrov ten minutes in. The score remained unchanged in the second period, despite the fact that Almetyevsk had three powerplay opportunities and outshot the opposition.

The visitors had the momentum on their side in the final period of regulation and yet failed to get anything past Yaroslav Ozolin. Butsayev scored his second of the game shortly before the final buzzer, while Ozolin made 30 saves en route to a shutout win. 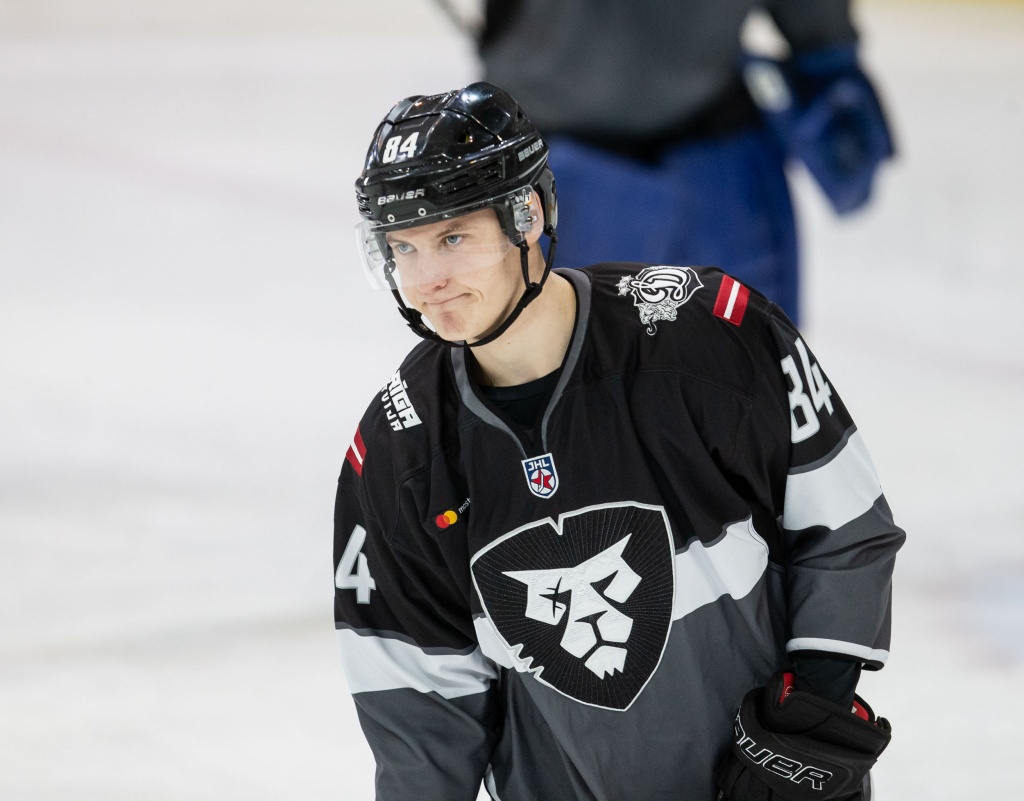 Top team of the West, SKA-1946 St. Petersburg, once again faced HK Riga, who currently second of the respective conference. The teams played even hockey in the opening period and the ‘army men’ got on the board with Artyom Zhuk’s marker as he beat Janis Voris. Latvian team tied it up with Bulat Galimov’s tally but allowed three goals late in the second period – Zhuk got another one, while Ivan Morozov and Grigory Gryaznov got a marker each.

Ilya Altybarmakyan essentially put it out of reach midway through the third stanza. Galimov scored his second of the game but it changed nothing in the big picture. SKA-1946 are yet to lose a game this season. With this 5-2 decision ‘army men’ extend their winning streak to 12 games.

Sakhalinskie Akuly get a hard-fought win in Setun 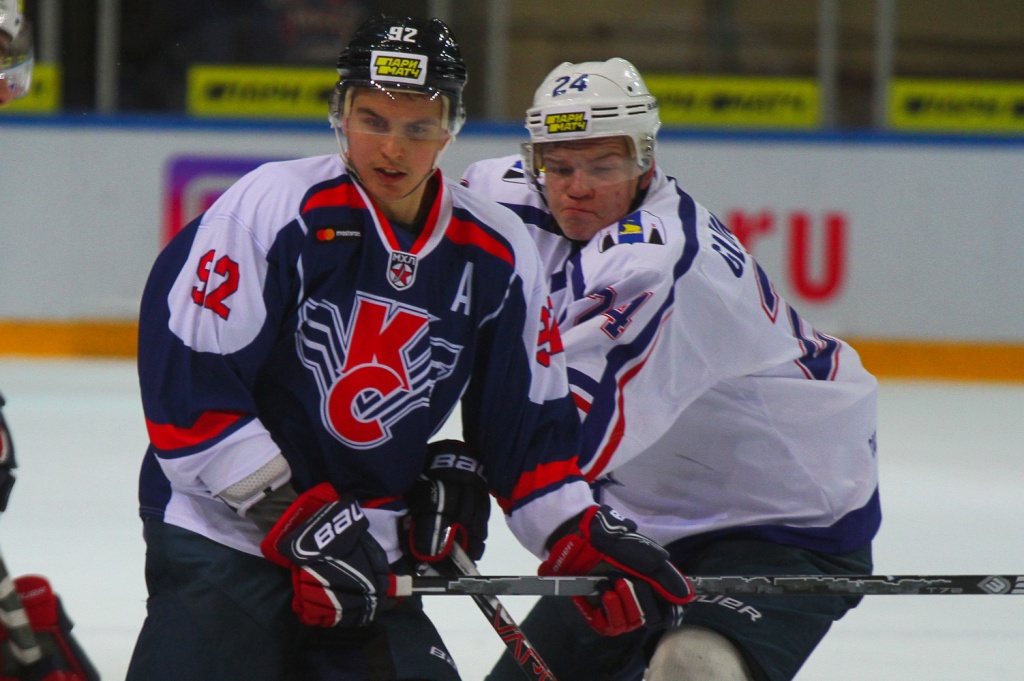 The visitors came out hot for the opening period, unlike the day before. Daniil Moskalyov tapped a cross-ice pass home to finish off a beautiful play by Yuzhno-Sakhalinsk. It took Setun just four minutes to get back even – Roman Badanin scored in his second consecutive game. Krylia Sovetov drew half of the crowd than the day before, although the 1,500 they did come provide their team with great support.

‘Soviet Wings’ put together a few good possession plays early in the second frame and made Grigory Kolupayev make several huge saves. Sakhalinskie Akuly got pinned to their net and didn’t create a single scoring chance even on a man-advantage. Late in the period Krylia Sovetov picked up the pace and made the Sharks take two consecutive penalties. However, Setun couldn’t get anything out of the four minutes with a man-advantage. With 30 seconds remaining on the clock in the period Sakhalinskie Akuly had the best chance of the stretch – first they hit the post and then Denis Popov kept the puck out with a toe-save.

The ‘Sharks’ got their lead back in the third period – Stanislav Basnev found the back of the net. Tension was getting higher and with seven minutes on the clock Sava Dubovitsky and Roman Yermachikhin dropped the gloves. The bout turned into a mass brawl. As a result, Dubovitsky got tossed from the game, while Krylia Sovetov got a powerplay. This time it took them just 15 seconds to capitalize on it – Damir Bilyalov took his time to set up a shot and fired it top-shelf through a screen.

The game ended with another brawl in Kryalia Sovetov’s slot – this time it was the visitors who got a powerplay out of it. Sakhalinskie Akuly also capitalized on it as Vadim Chebotaryov hit the twine.

Despite pulling their goaltender for the extra-attacker, Alexander Trofimov’s men couldn’t find the equalizer and force overtime. Sakhalinskie Akuly win 3-2 and hand Krylia Sovetov their first loss on home ice. 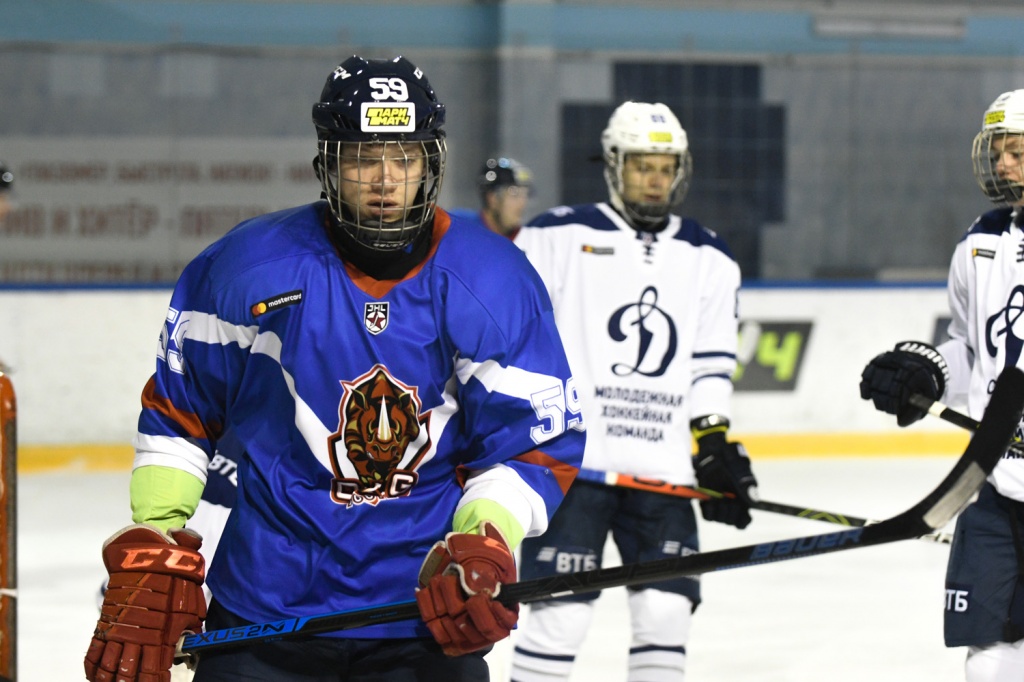 The visitors had the momentum throughout the game, constantly causing havoc in front of Vladislav Pakin, who made his Parimatch Junior Hockey League debut. The rookie stopped 56 shots but it wasn’t enough. Midway through the third period Yegor Bryzgalov skated to the middle of the ice and wristed it home to open scoring. Beijing had a real chance to force overtime as late in regulation Dynamo got a penalty. Alexander Barkov decided to pull Pakin for the extra-attacker but ORG Junior couldn’t get anything past Vadim Zherenko. The goaltender went on to stop 22 shots and Bryzgalov scored the empty-netter to seal the deal. 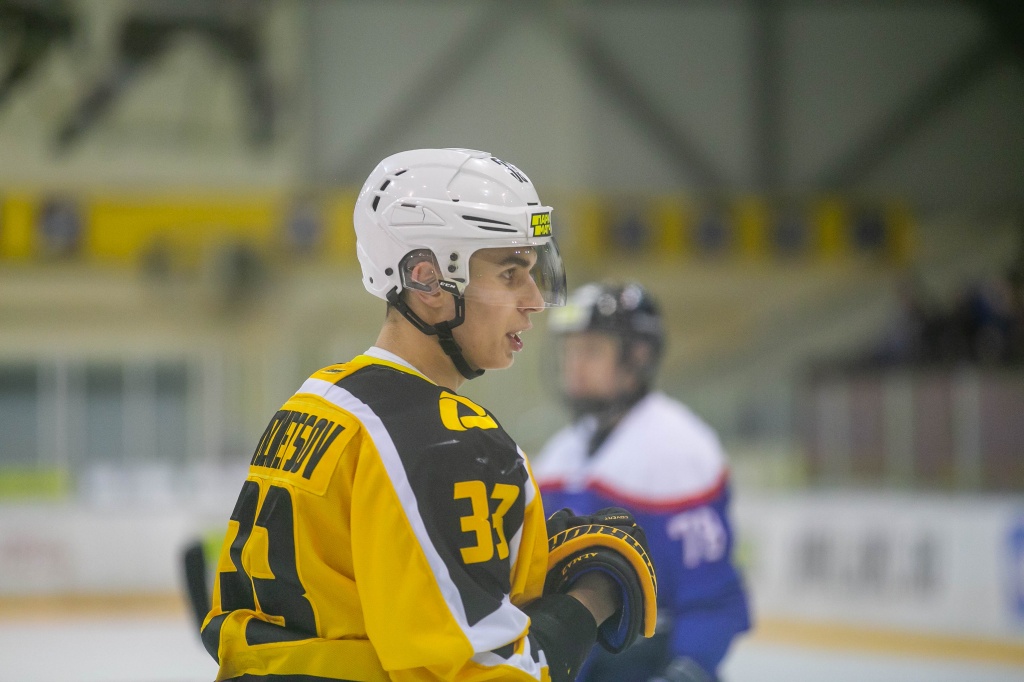 The visitors dominated in the opening period – HC Kapitan Stupino ran into a penalty problem and Almaz Cherepovets had three powerplay opportunities. Cherepovets took 12 shots on net but couldn’t beat Leonid Sklyar. As for home team, they cherished their scoring chances. Kapitan converted on their initial man-advantage – Daniil Tyutchev got it past Konstantin Shostak and opened scoring. The visitors got back even 10 minutes later – Yegor Chizhov capitalized on Almaz’s fourth powerplay opportunity.

Nevertheless, Kapitan still went to the dressing-room leading on the scoreboard – Yuri Kozhukhov found the back of the net. Almaz came out hard for the third stanza – Kapitan once again got a string of penalties and once had to kill off even a 5-on-3. However, Sklyar shined in goal and backstopped his team to win. Kapitan take it 2-1 and get their revenge for losing the day before.

Atlant fall apart and lose to Spartak in blowout fashion 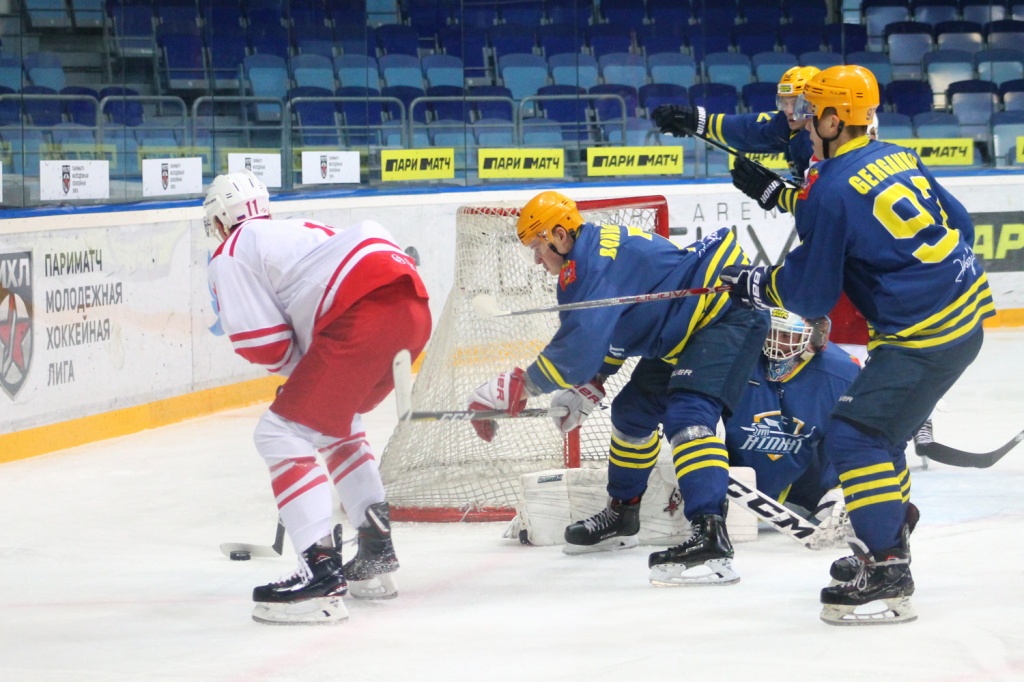 The teams played even hockey in the opening 20 minutes of the game. Home team outshot JHC Spartak Moscow and created more scoring chances. Nevertheless, the red-and-white got on the board first – Ruslan Novruzov sent it past Platon Zadorozhny on a powerplay.

Home team got off to a rough start in the second period. Just three minutes into it Artyom Kanayev got a game-misconduct. Home team had to kill off a long 5-minute penalty and Atlant couldn’t get it done. First Nikita Borodayenko doubled the lead for Spartak and then Yegor Maklozyan and Yegor Kravchenko got a tally each. The former would go on to score another one in the third stanza. After Bogdan Lvutin found the back of the net as, Atlant Moscow Region coaching staff called timeout and swapped their netminders.

Home team scored twice for consolation in the third period – Yegor Sartakov and Igor Shvelev got the tallies. However, it changed very little on the scoreboard. Atlant lose 6-2. This is their 10th consecutive defeat. Mytischi will now face SKA-Varyagi on home ice, who have one of the worst records in the Western Conference. As for Spartak, who have improved their winning streak to three games, their next opponents is Krasnaya Armiya Moscow.