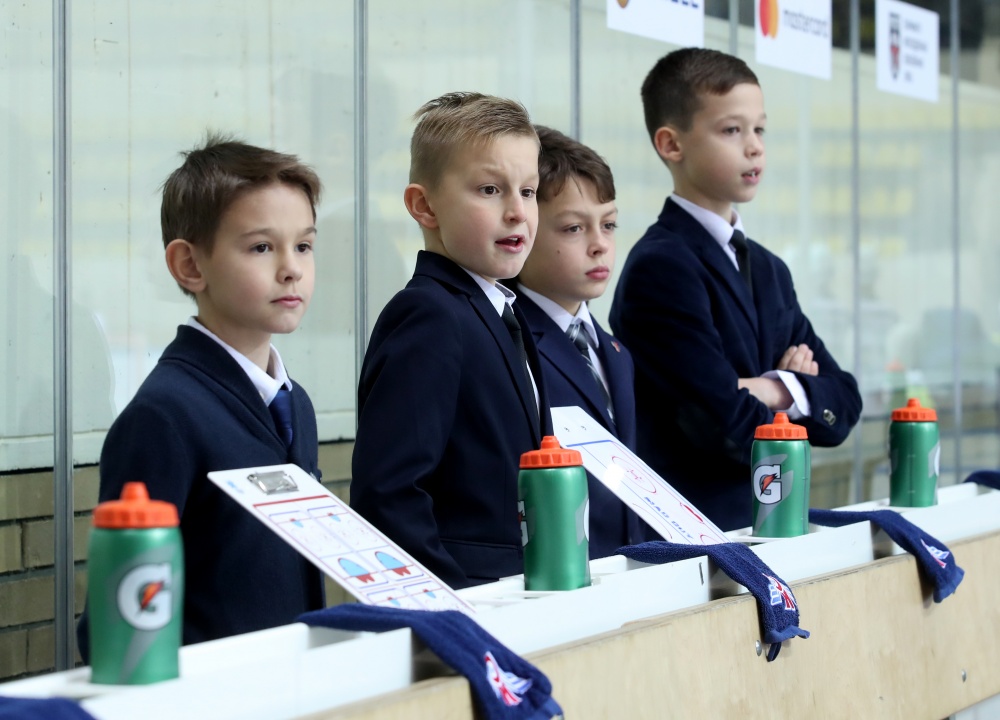 Just nine regular season games took place in Parimatch Junior Hockey League on October 6th. Western conference teams went back to action after a short break. We take a look at all Sunday games in this review.

Avto beat Irbis, get their revenge 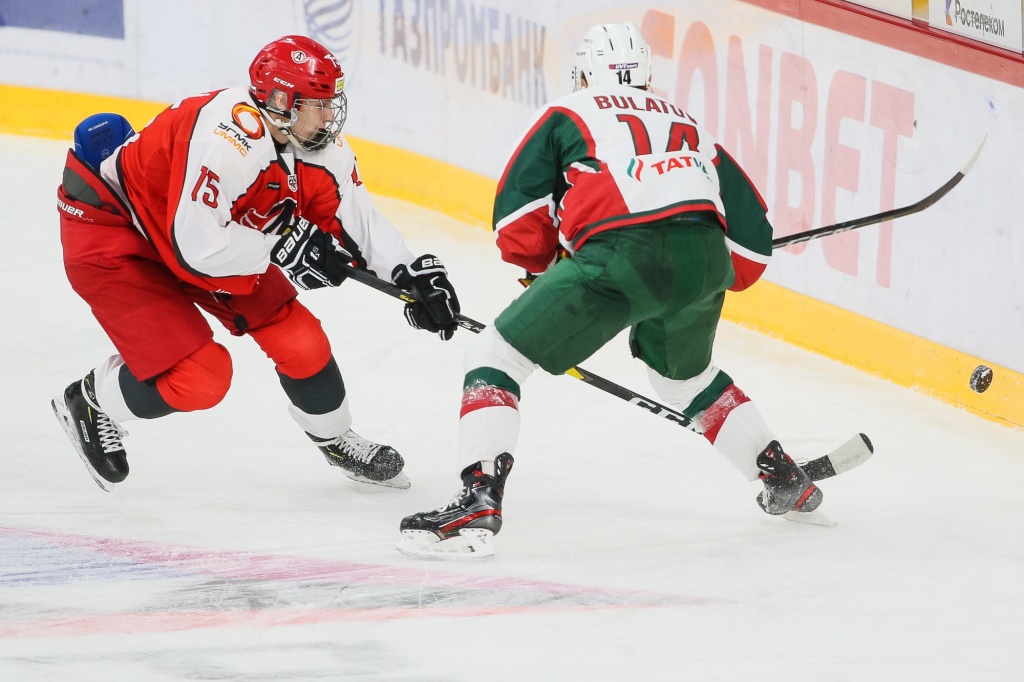 Avto Yekaterinburg hosted Irbis Kazan on home ice for the second consecutive time and managed to get their revenge for losing the day before. The teams exchanged goals in the opening period. Six minutes in Ilya Loza tapped it home off a pass from behind the net made by Vladislav Bukharov. Kazan responded 14 minutes in – Georgy Romanov gave up a bad rebound, the puck bounced straight to Kirill Mukhin’s stick and the forward scored on the yawning net.

As it turned out, that was the only goal Kazan would score all game. Bukharov put Yekaterinburg in the lead late in the second period as he converted on a breakaway slipping it past Artur Akhtyamov. Avto scored their third and last goal of the game with four minutes remaining on the clock in the frame. Konstantin Suslov received a cross-ice pass and sniped a wrister. Vitaly Solovyov’s men protected the 2-goal lead and won 3-1 on home ice.

Loko shine in the 3rd, win in Chekhov 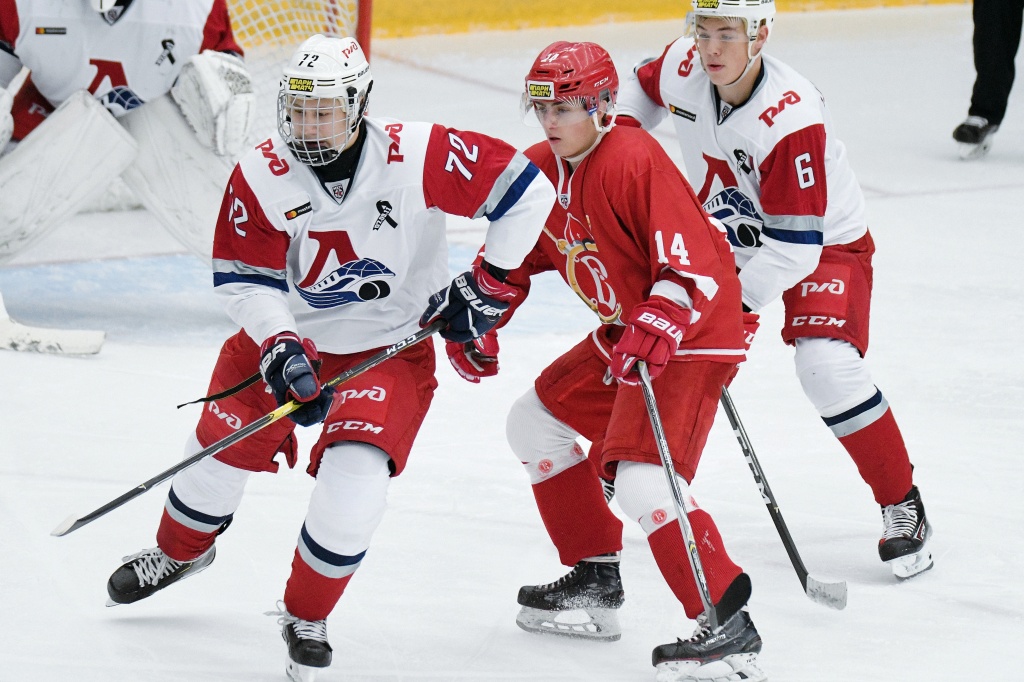 Russkie Vityazi defended the ice against reigning champions Loko Yaroslavl. Chekhov managed to score two quick goals in the opening period – Kirill Kondyrev and Yegor Zubov got a tally each past Yegor Naumov in a span of two minutes. That didn’t faze Yaroslavl as they grabbed the momentum and got a goal back – Ilya Nikolayev found the back of the net. Seven minutes into the second period Russkie Vityazi scored another one but it was waved off as it was gloved into the net by Daniil Baklastov.

Soon after that Loko tied it up – Roman Bychkov got the marker. The teams headed to the dressing-room with Russkie Vityazi leading by a narrow margin after 40 – goaltender’s mistake led to Nikolai Smirnov’s goal. However, Chekhov broke down in the third stanza. Yaroslavl dominated as Yegor Manin and Mikhail Smirnov got a tally each to put their team in the lead. The visitors got second wind towards the end of regulation and secured the win with three more goals – Maxim Beryozkin, Ilya Mironov and Vladislav Lukashevich hit the twine. Loko win 7-3. 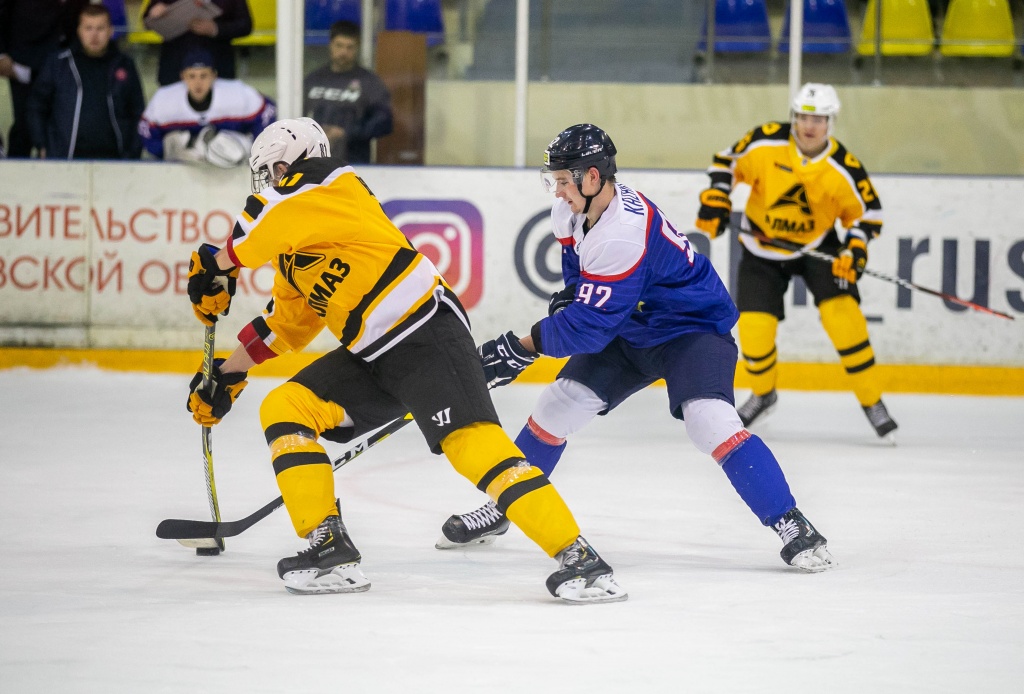 In Stupino, Moscow Region local HC Kapitan faced Almaz Cherepovets. First goal of the game came seven minutes in and it was the home side who got it – Kirill Melnichenko put it past Konstantin Shostak. That was the third goal of the season for the 17-year-old Melnichenko. Cherepovets responded with a powerplay goal on Stupino’s initial penalty of the game. Vladislav Fyodorov, who leads the team in points, found the back of the net.

Nine minutes into the second frame Kapitan once again got in the lead – Ruslan Aliyev got the tally. However, soon after that Daniil Pyatkin got a 2-minute minor for holding the stick and Cherepovets went on to capitalize on the man-advantage as well – Nikita Lukhovskoy made it a 2-2 hockey game. Late in the period Alexei Lapin hit the twine. Alexei Kapustin’s marker early in the third period was key. Ivan Kazakov brought it back to a one goal differential but Almaz grabbed the momentum after that. Lukhovskoy and Kapustin scored their second goal of the night each and Cherepovets won 6-3. 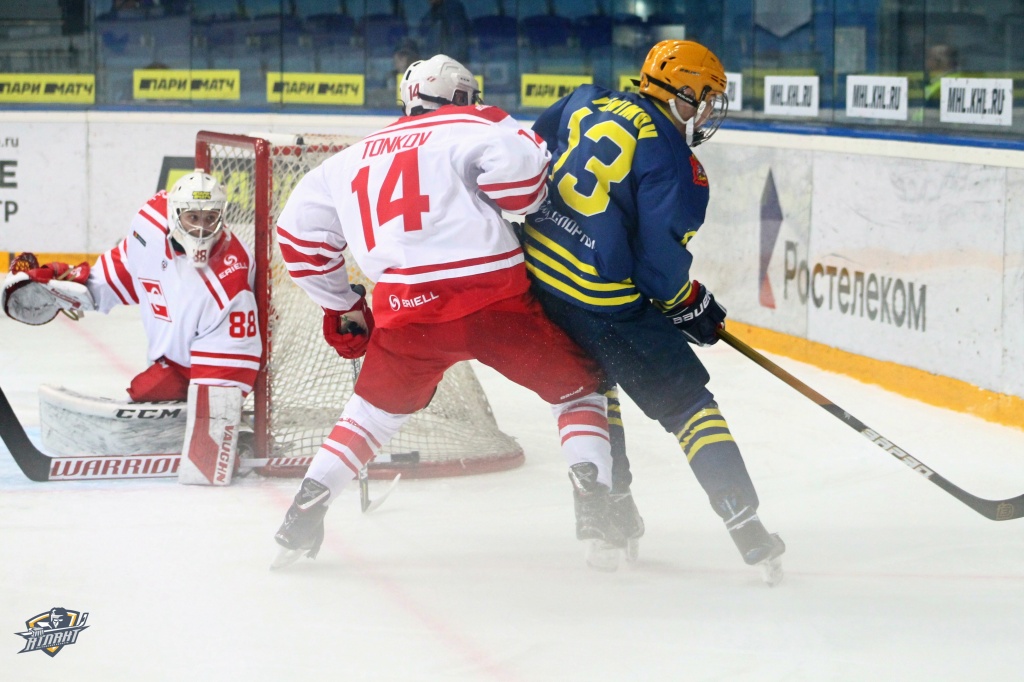 JHC Spartak Moscow visited Atlant in Mytischi, Moscow Region. The red-and-white went on a penalty kill early in the first as Anton Mishakov got a minor for holding. Atlant couldn’t convert on the man-advantage but they did open scoring at even-strength. Roman Daryin sent it past Dmitry Kulikov. Spartak responded early in the second frame – Yegor Kravchenko put it home and then Ivan Kurdin put the red-and-white in the lead. The fans didn’t have to wait long to see another goal – Daryin scored his second of the night and then completed his hat-trick. With 25 seconds remaining to play in the period Kirill Tagirov upset Mytsichi fans as he made it a 3-3 hockey game.

The teams played cautious hockey in the third stanza and didn’t take a lot of shots on net. There was no scoring in the stretch and the game went to overtime. Georgy Gigolayev scored the winner 32 seconds into the extra period of action, while Moscow Region team deservedly got a point.

Krylia Sovetov enjoy a hard-fought win in their home-opener 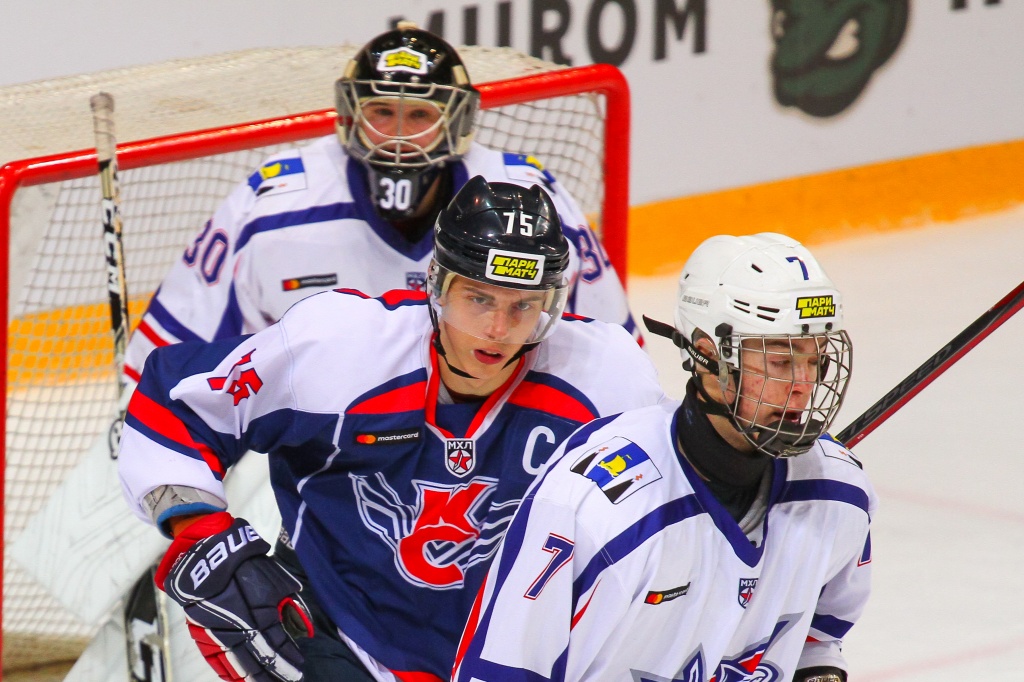 Krylia Sovetov Moscow were the last team to have a home-opener in the league, so they went all out. The game in Setun drew a huge crowd of 3,810 fans. Management was the theme of the game. The atmosphere at the arena was held in accordance with Teacher Day, which was celebrated the day before. ‘New’ director, president and head-coach were watching the game from VIP lounge, who were selected among Setun junior hockey school students. Krylia Sovetov were also led onto the ice by junior hockey school students, who also acted as PA announcer, participated in ceremonial puckdrop, while cheerleaders were selected from local dancing school. 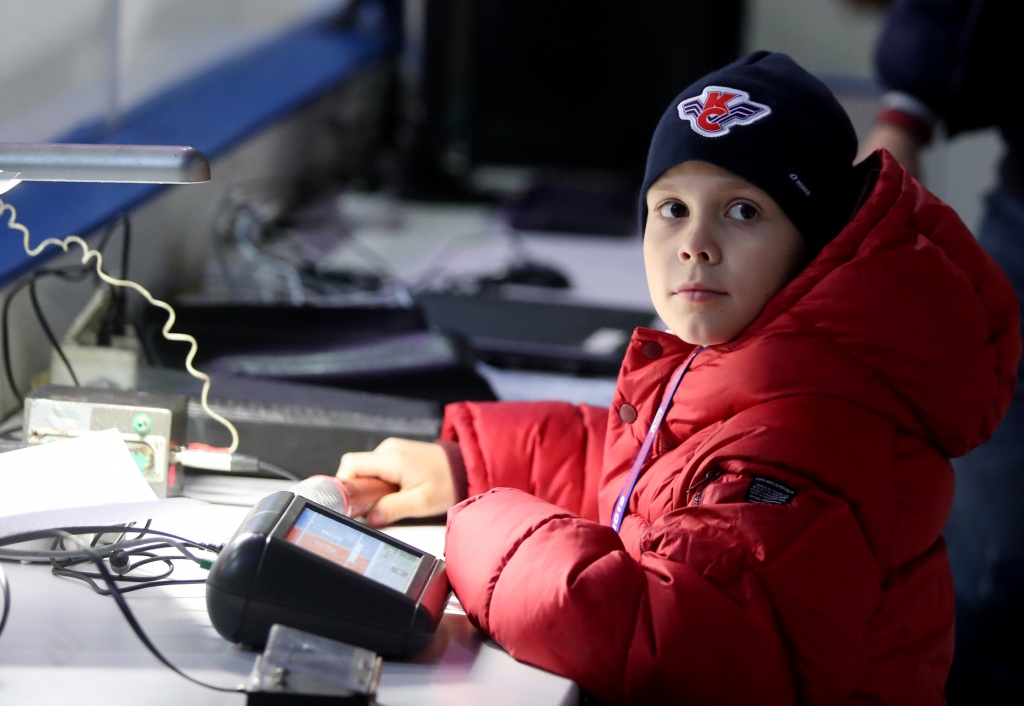 The real GM of the club – Alexei Morozov – also came to the game and watched from the stands. Not far from him was located home team’s fan-sector who had prepared ‘Storm it!’ banner for the game. Notably, the visitors also had their supporters at the arena – Sakhalinskie Akuly fans also brought a banner.

The atmosphere had to affect the game. Krylia Sovetov came out hard for the opening period. Yegor Zudilov got a penalty on the forecheck leaving his team shorthanded but the visitors couldn’t create anything dangerous in front of Denis Popov’s net. First goal of the matchup came midway through the opening frame – Roman Badanin received a cross-ice pass from Yevgeny Pogonchenkov and wristed it past Grigory Kolupayev. Yuzhno-Sakhalinsk woke up after conceding a tally and created a few good scoring chances. However, the score remained unchanged in the period.

The ‘Sharks’ tied it up in the second frame after both teams had failed to convert on their respective powerplay attempts – Alexei Dolishnya solved Popov.

The teams exchanged quick goals early in the third stanza – three minutes in Ildar Kashafetdinov put Krylia Sovetov back in the lead but Russia’s Far East’s team managed to get the equalizer in 20 seconds – Dolishnya scored his second of the night. Game-winning goal came exactly a minute later – Roman Yermachikhin got the tally. Sakhalinskie Akuly had the momentum on their side for the rest of the game but failed to get anything else past Popov, despite having multiple powerplay opportunities and pulling their goaltender.

Krylia Sovetov begin their home stands with a win in a hard-fought game. They will play their next game on October 7th. 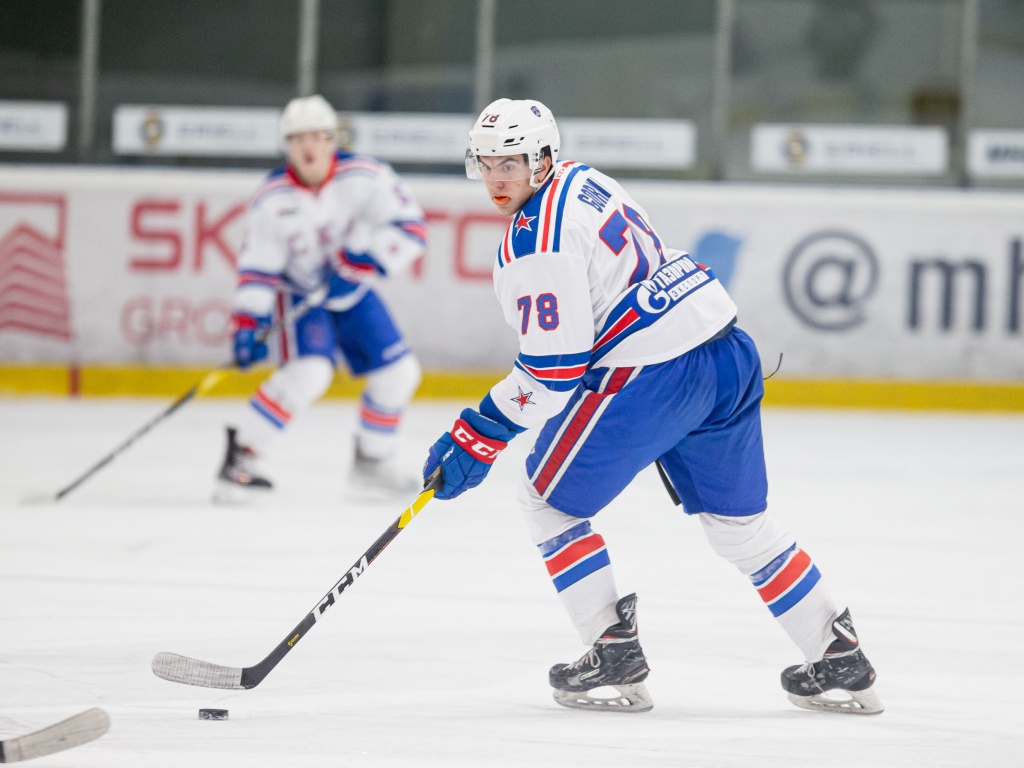 First period of play between top two teams of the Western Conference featured no scoring chances – the teams took just six shots on net each. Riga had two powerplay attempts but couldn’t beat Pavel Romashkin. The visitors opened scoring seven minutes in – Ilya Altybarmakyan found the back of the net.

The teams traded offensive rushes in the second frame but rarely took any shots. Midway through the period SKA-1946 triple their lead. First Dmitry Semykin hit the twine and after Riga went down a man, St. Petersburg converted just a few seconds into it – Ivan Morozov passed it to Nikita Zorkin off the boards, who relayed the puck to Ivan Manin and the latter sent it past Janis Voris to essentially secure the win for the visitors.

With five minutes on the clock in regulation Bulat Galimov solved Romashkin, shattering his shutout hopes and getting a consolation marker for Riga. SKA-1946 were up 4-0 at the point as Grigory Gryaznov had registered another tally. 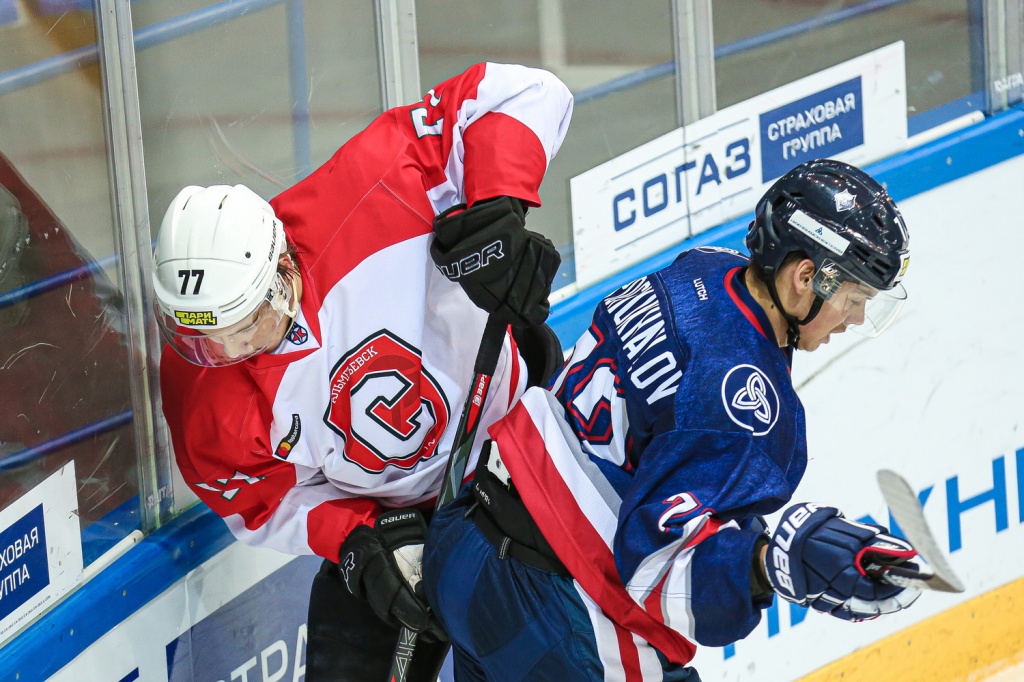 Sputnik Almetyevsk looked like a better team in this but Yaroslav Ozolin managed to stop all 30 shots he had to face. Reaktor Nizhnekamsk took just eight shots in the opening 20 minutes but it was enough to get on the board – Ilya Paranin found his target just three minutes into the game. Maxim Polkin converted on a powerplay to double home team’s lead.

Sputnik couldn’t turn things around and lost in the first game of the back-to-back series between Tatarstan rivals. 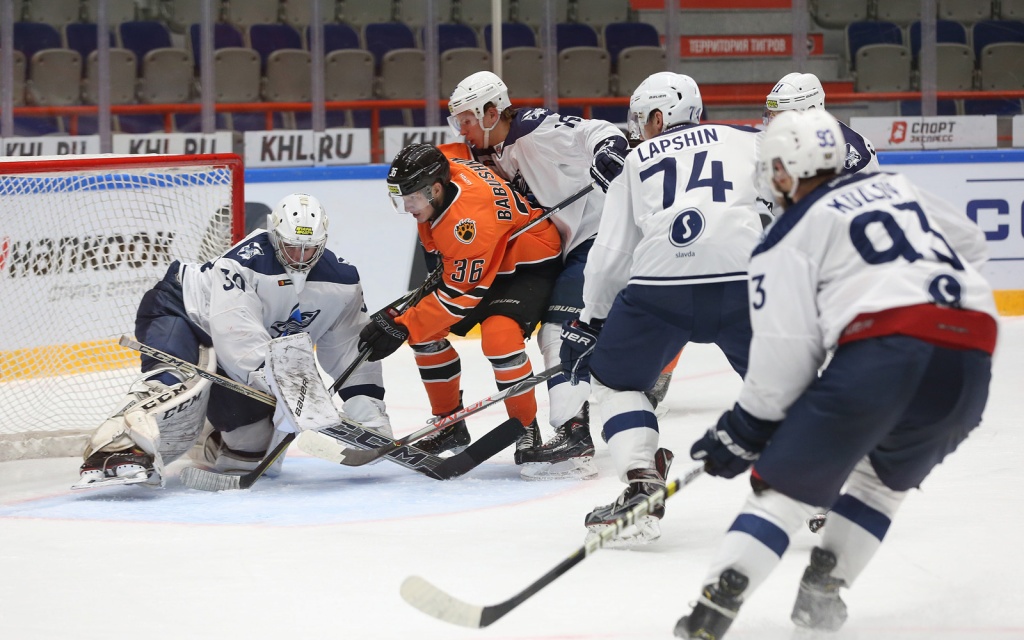 The gameday kicked off in Khabarovsk where Amurskie Tigry played hosts to their Russia’s Far East rivals Taifun Primorie Region, who have looked good lately. The game clearly showed that one of the teams has serious trouble, while the other has found its game and converts it into points. The visitors capitalized on Khabarovsk’s initial penalty of the game – Alexei Drobin found the back of the net and his marker was the only one the fans get to see in the opening period of play. Primorie Region came out hard for the second period – Ivan Bunov and Danil Fyodorov improved Taifun’s lead to three goals.

Yuri Cherkashin was replaced by Artyom Martynov after that but it didn’t help the ‘Tigers’ turn the game around. Ignat Korotkikh scored a consolation goal for Amurskie Tigry late in regulation but Primorie Region still had the last word in this one – Ilya Ovechkin scored the last goal of the game and Taifun won 4-1 to continue their pursuit of top spot in the conference. 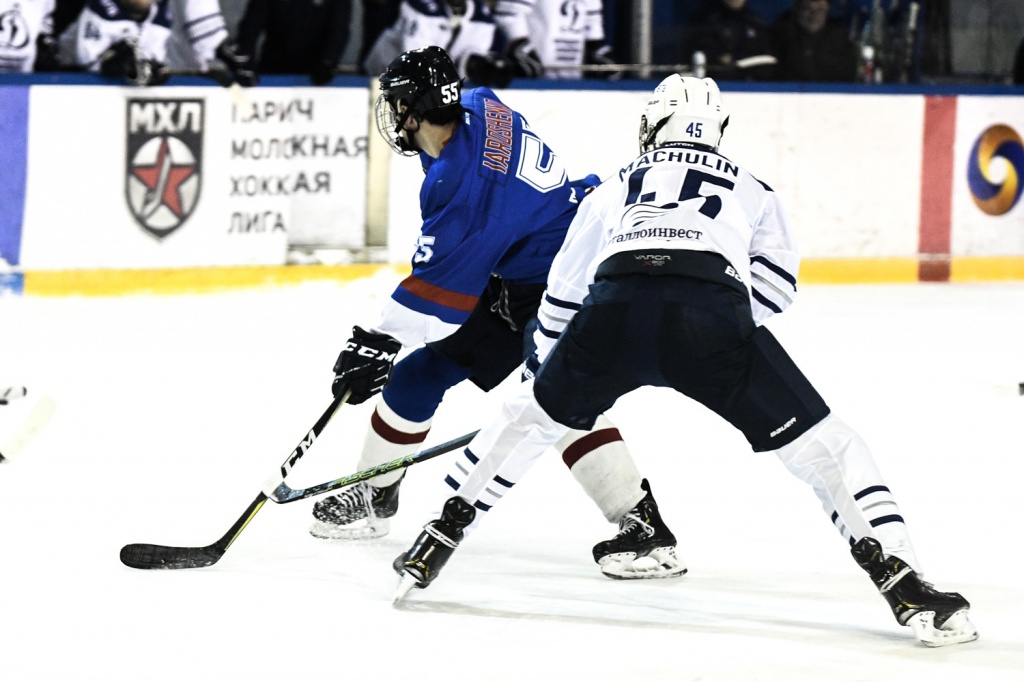 JHC Dynamo Moscow went on the road to Dmitrov – their former home rink – to face ORG Junior, representing China. Dynamo had the momentum on their side but failed to open scoring as Haoran Hu stopped 11 shots. The blue-and-white began the second frame with two quick tallies – 29 seconds in Mark Katsevich put the visitors in the lead and four minutes later Anton Kosolapov doubled the lead for Dynamo.

Beijing fell apart in the third stanza – Ivan Glebov, Yegor Zvonov and Vasily Machulin further improved the lead for Moscow. All ORG Junior could get in this one was a consolation goal – Dmitry Zherebkin got the marker. Dynamo win 5-1, extending ORG Junior’s losing streak to 13 games.