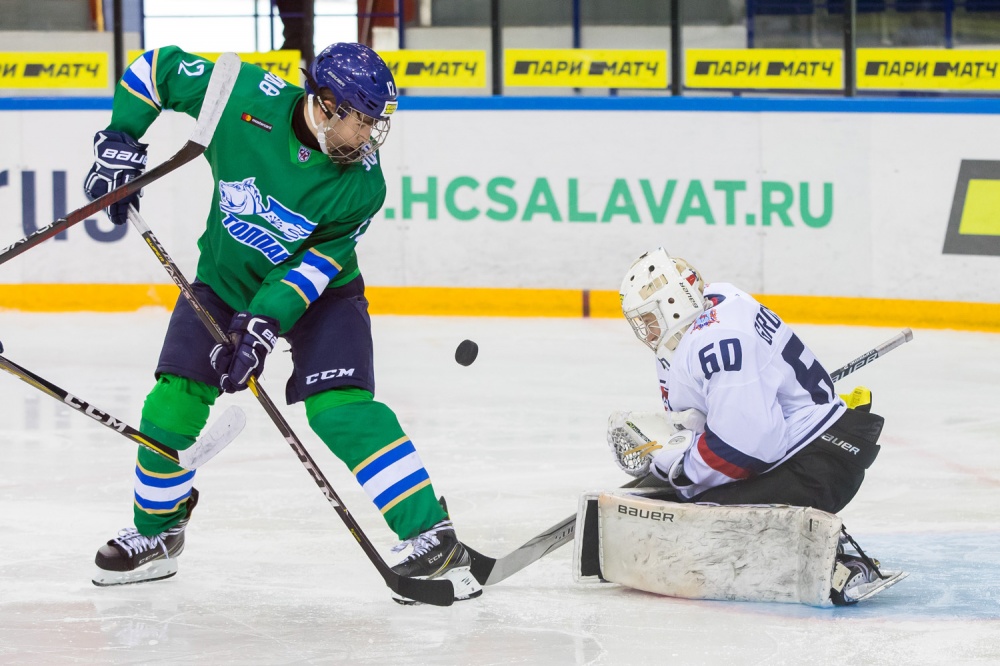 Just four regular season games took place in Parimatch Junior Hockey League on October 5th. All of them were Eastern Conference matchups. We take a look at all of them in this review. 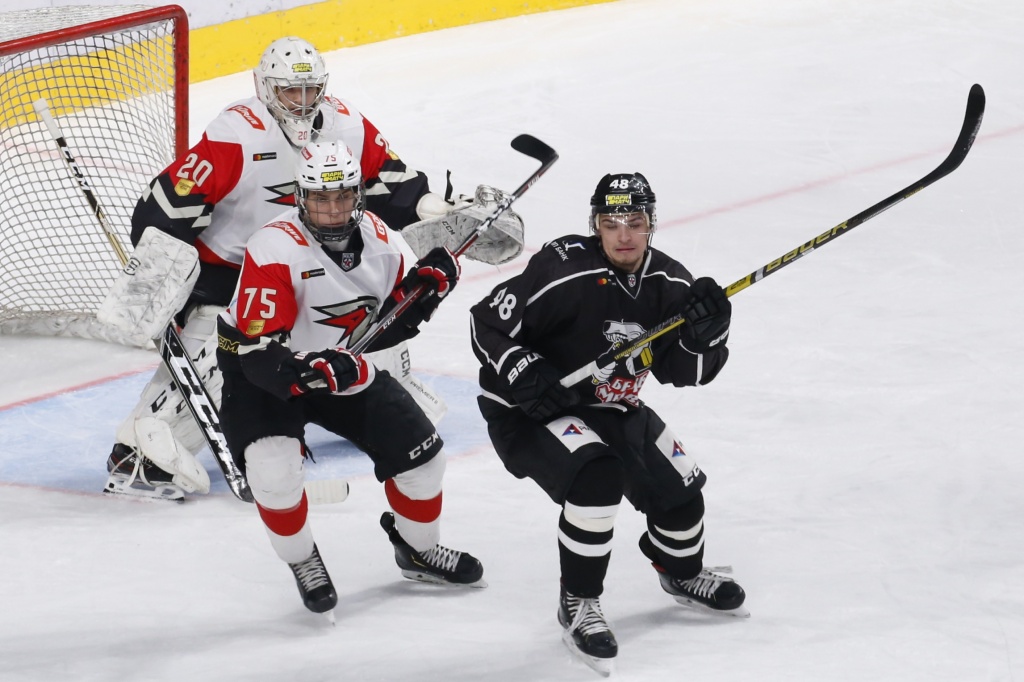 Home team got on the board first – Artyom Shmarev received a stretch pass from his defenseman, skated between two opponents and finished off the solo dash. With 90 seconds on the clock Omskie Yastreby managed to get back even – 17-year-old Vladimir Mashkov wheeled around Chelyabinsk defense and instead off passing it cross-ice, sent the puck just over the shoulder of the goaltender and right into the back of the net.

Home team began the second period of play with another goal. Konstantin Lukin entered the zone and took a quick shot, pounced on his own rebound, which was given up by Georgy Dubrovsky, risked shooting it from a sharp angle and found his target.

‘Polar Bears’ had the momentum in the third period and peppered Dubrovsky with shots – the netminder even had to sop one of them with his mask. Omskie Yastreby were spending less time in the offensive zone and, nevertheless, thanks to Mashkov’s individual skill managed to tie it up. The forward enjoyed his first career 2-goal game.

Omsk grabbed the momentum in overtime. The puck was almost constantly somewhere around Viktor Selivyorstov’s net, while Belye Medvedi took no shots on net over the stretch. Two minutes into the extra period of action Sergei Yanevsky took a screen-shot and got it past Selivyorstov to bring the ‘Hawks’ their second win in Chelyabinsk. 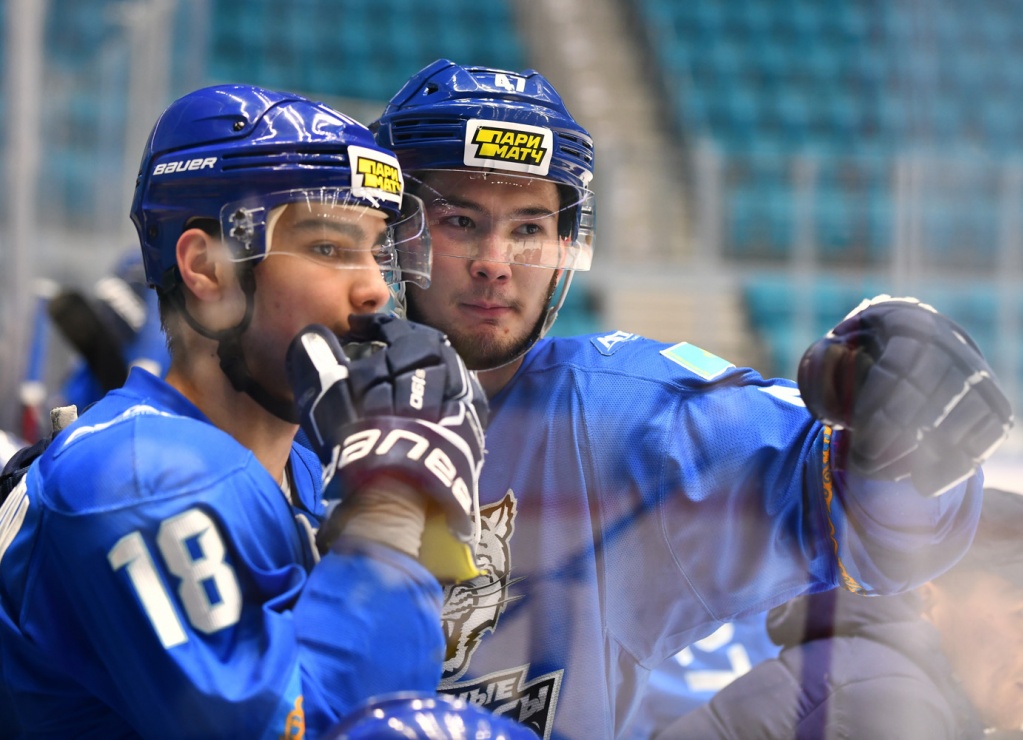 Sibirskie Snaipery faced Snezhnye Barsy in Nur-Sultan, Kazakhstan for the second consecutive time. First period of play turned out to be high-scoring. The teams traded leads all the way through. Vladislav Sayko opened scoring in a hurry, while Novosibirsk responded with a goal by Nikita Yefremov. After that home team had to come back from behind as Makar Nikishanin gave the ‘Snipers’ a 2-1 lead. However, Snezhnye Barsy tied it on Sayan Daniyar’s marker.

Goal-fest continued in the second frame. Sibirskie Snaipery got in the lead again as Mikhail Romayev got a goal and Nikishanin added another tally to his personal record. However, home side wasn’t going to lose their 11th consecutive game. Maxim Musorov and Yusup Asukhanov made it a 5-5 hockey game. Key moment came 13 minutes into the third stanza as Artur Gatiyatov scored on a powerplay to capitalize on Nikishanin’s penalty. Danil Butenko scored on the empty net to seal the deal. With this 7-5 win Snezhnye Barsy end a long losing streak. 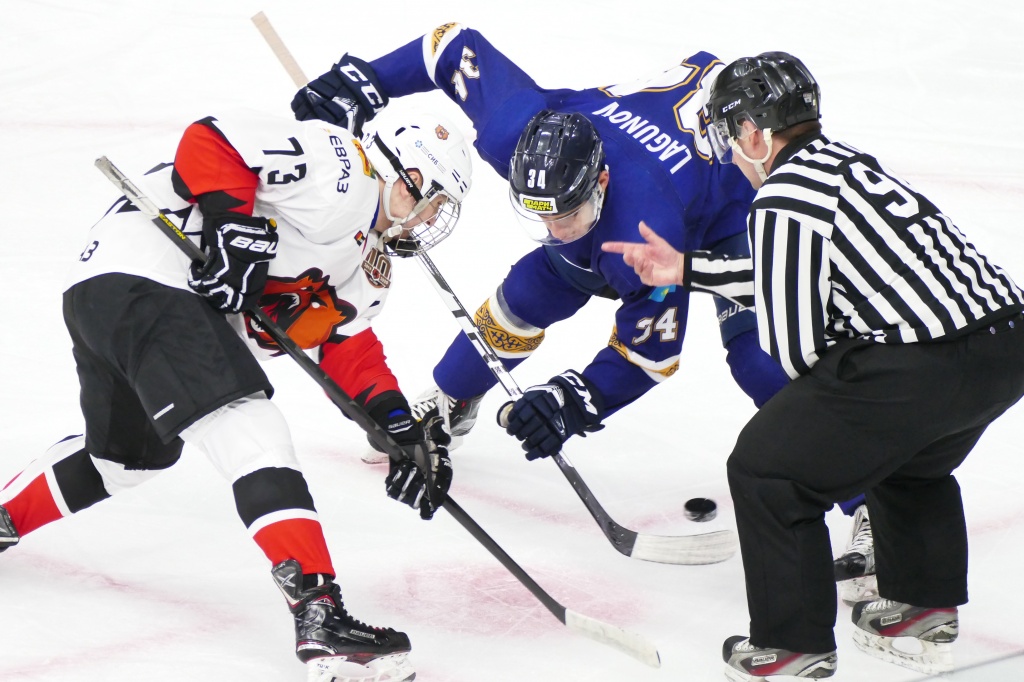 Altay Ust-Kamenogorsk faced Kuznetskie Medvedi. First period of action featured no goals, which is a but unusual for a game involving Novokuznetsk. The ‘Bears’ played with much more focus defensively and didn’t let the opposition get on the boards. The visitors gave in only after Danil Kozhedub got a minor penalty for holding. Altay’s top-line put together a great passing play, Kirill Kuznetsov stopped Stas Petrosyan’s shot but couldn’t stop Andrei Lagunov on the rebound.

13 minutes into the third period home team converted on a 2-on-1 rush – Denis Budenchuk got his marker. Novokuznetsk managed to get a goal back as Mikhail Bogdashkin found the back of the net but that didn’t help ‘Bears’ get any points. Altay scored a shorthanded goal on the empty net – Artyom Klavdiyev got the tally – and beat Kuznetskie Medvedi for the second consecutive time. 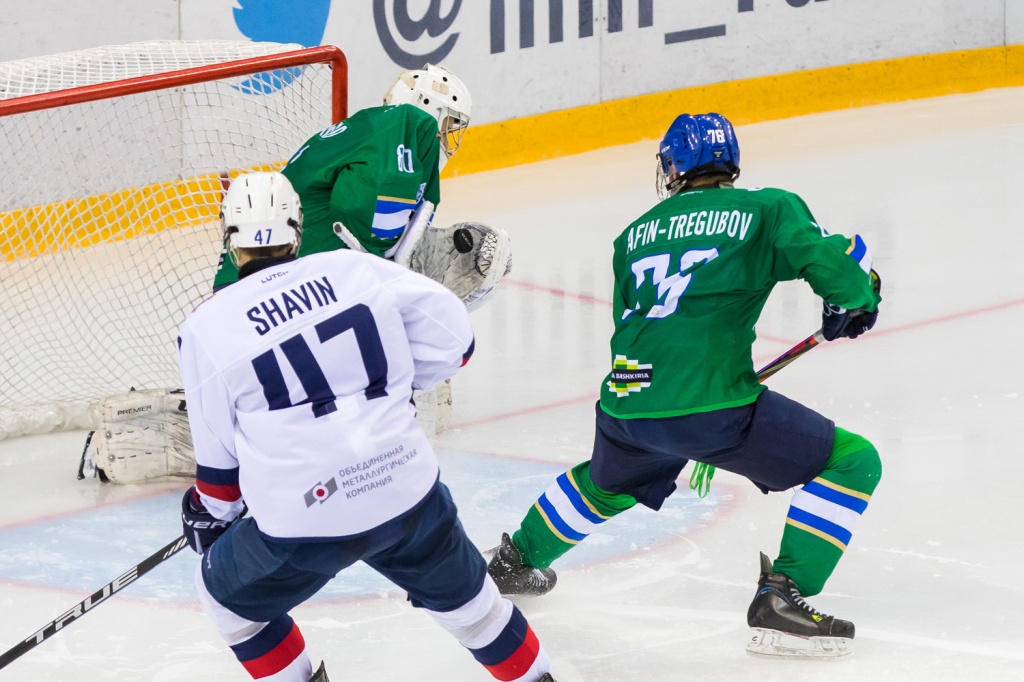 After losing the day before Tolpar Ufa came out hard for the second game of the back-to-back series against Chayka Nizhny Novgorod. Home team spent the first couple of minutes passing the puck around in the offensive end. Ufa got back Daniil Alalykin in their lineup who have scored his first career KHL goal just recently, so Yegor Gromovik had a lot of work on his plate.

The visitors managed to even the game up a bit towards the end of the period. They even had a powerplay opportunity. Anver Suleimanov had very little to worry about on the penalty kill but just as Ivan Kanashev stepped back onto the ice from the penalty box, Chayka put together a beautiful play and opened up the scoring.

The team were even in the second frame. Neither of them was able to get the momentum on their side as both Tolpar and Chayka rarely created scoring chances off counter-attacks. With four minutes on the clock Chayka got a bench minor for having too many men on the ice. Gromovik made a few huge saves but couldn’t cover the puck on one play and Tolpar’s top-scorer Andrei Kuznetsov tied it up shortly before the intermission.

Early in the third stanza Alalykin got on the receiving end of a huge check. It was followed by a mass brawl at center ice and Tolpar came out with a man-advantage from it. Ufa converted on the powerplay just a few seconds into it – Sergei Safin-Tregubov put the puck on net, Sergei Shapovalenko pounced on the rebound and pounded it home from the slot. The visitors had the next powerplay and were also able to capitalize on it – Ivan Shulga received the puck between the dots and scored from open ice as it went upstairs past Suleimanov. That gave the visitors a boost and three minutes later they got in the lead as Artemy Mutovin found the back of the net.

Tolpar kept creating scoring chances and with just 19 seconds remaining to play in regulation scored the equalizer. Eldar Gazimov sent it in with a shot from the blue line to get his first career Junior Hockey League tally. Tolpar spent half of overtime on a powerplay and came really close to ending the game but Chayka – largely due to Gromovik’s heroics – managed to make it to the shootout. Home team didn’t let this opportunity go to waste and got their revenge for losing to Chayka the day before. Suleimanov, who had lost in his first start against Stalnye Lisy Magnitogorsk, enjoyed his first win in JHL and collected the puck after shootout as a souvenir.