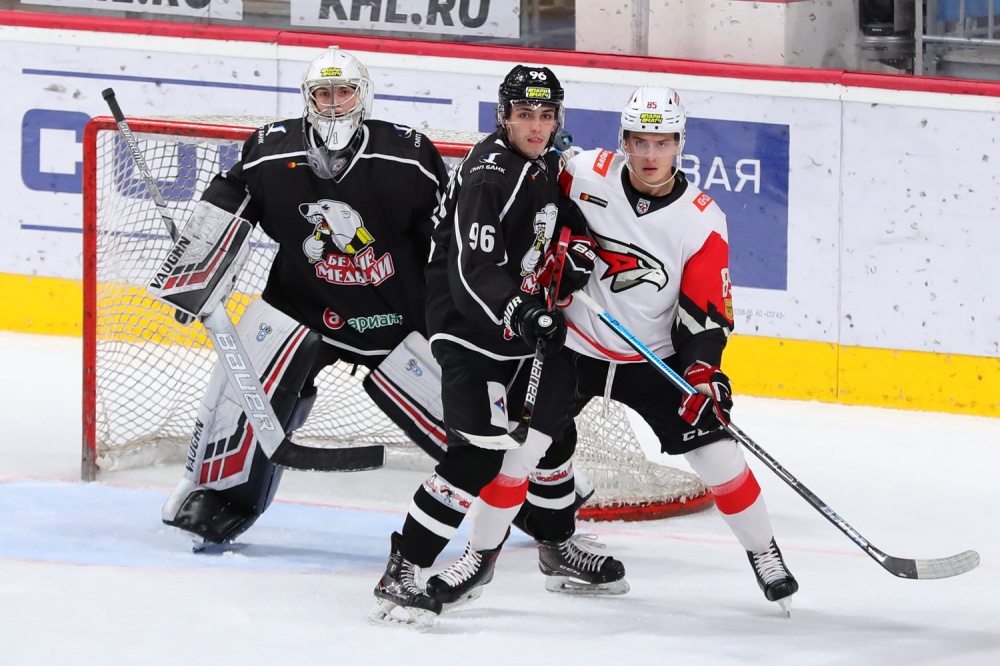 Seven regular season games took place in Parimatch Junior Hockey League took place on October 4th. All of them were Eastern Conference matchups. We take a look at all Friday games in this review. 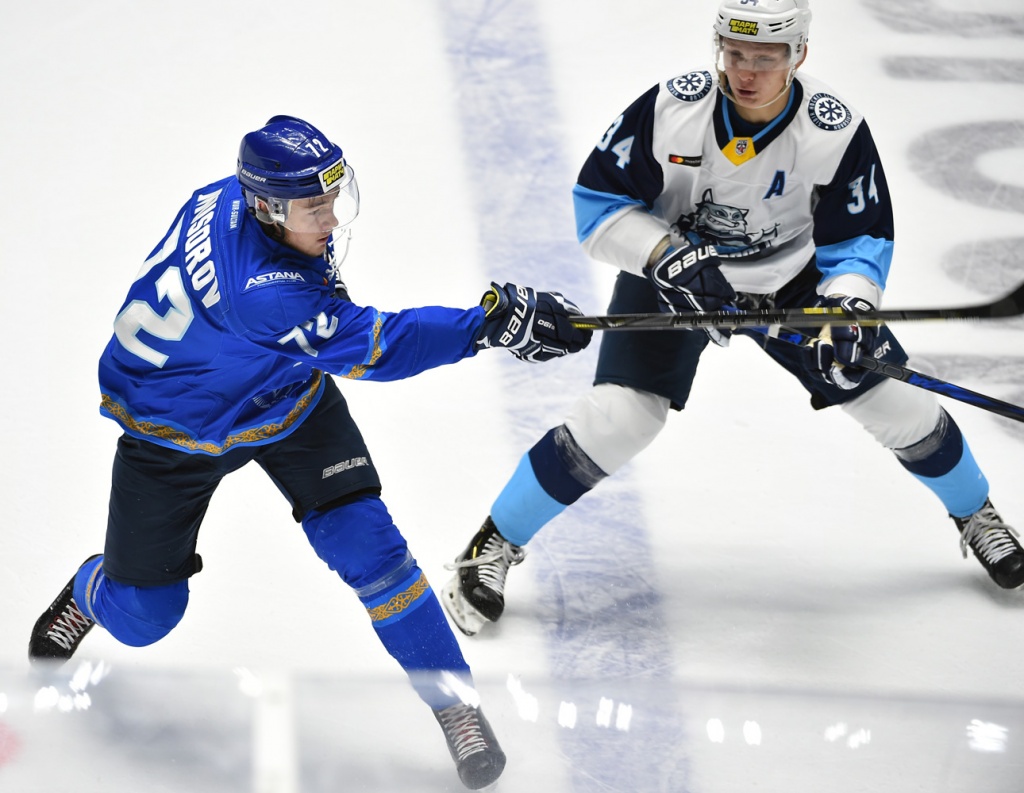 Two teams representing different ends of the table met in Nur-Sultan, Kazakhstan as well. Sibirskie Snaipery could go top – even if only for a few hours – in case of beating Snezhnye Barsy. Nikita Potapov opened scoring four minutes in but the teams headed to the dressing-rooms with home side leading 2-1 – Maxim Musorov scored a pair, including a powerplay goal.

The visitors woke up in the second frame. Nine minutes into it Mikhail Romayev converted on a man-advantage and soon after that Danil Davydov put Novosibirsk in the lead. Dias Guseinov made it a 3-3 hockey game, which annoyed the ‘Snipers’ even more as they went on to score two more – Dmitry Ovchinnikov got one tally and Potapov registered his second of the game. Sibirskie Snipery got two more markers in the third period – Alexei Krivchenkov and Yegor Pronin found their targets. With this 7-3 loss, Snezhnye Barsy suffer their 10th consecutive defeat. 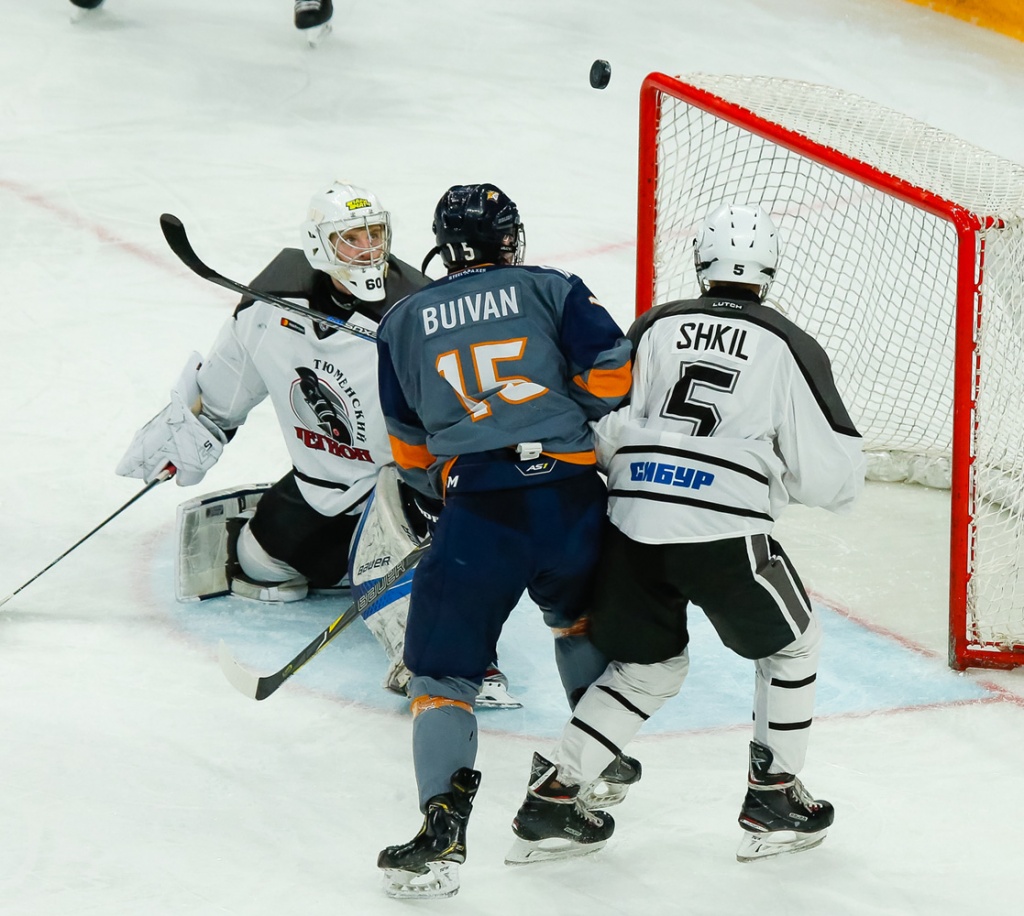 Stalnye Lisy Magnitogorsk faced Tyumensky Legion for the second consecutive time and once again enjoyed a walk in the park. Alexei Sakharov put the ‘Steel Foxes’ on the board and Danil Barambayev tied it up 15 minutes in as he buried a rebound past Gleb Moiseyev. A few minutes later Yuri Platonov gave Magnitogorsk their second lead of the game. Home team scored two more goals in the second stanza – Edgar Varagyan, Andrei Oleinikov and Dmitry Sheshin, who leads Stalnye Lisy in points, got a tally each.

Magnitogorsk settled on that and Tyumensky Legion were able to create several good scoring chances in the third period. However, they couldn’t even eke out their second of the game. Home team was close to further improving their lead late in regulation as Tyumen got two consecutive penalties but ‘Steel Foxes’ couldn’t capitalize on the chance. They still got a solid 5-1 on home ice. 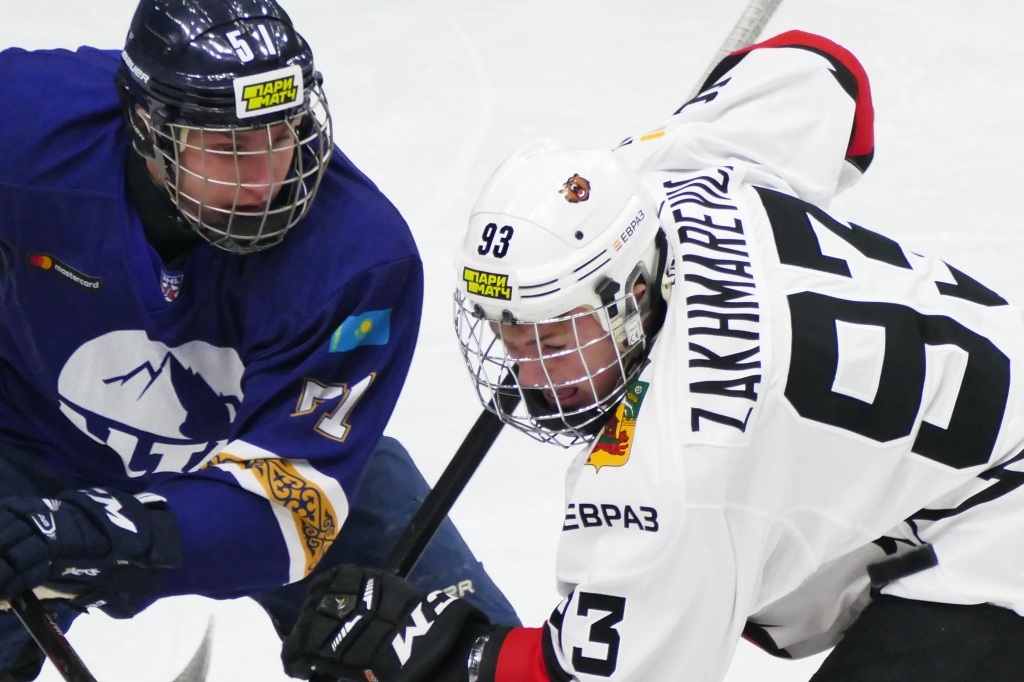 Altay Ust-Kamenogorsk faced struggling Kuznetskie Medvedi. Novokuznetsk scored five minutes in – Denis Sizikov entered the zone and fired one home. Officials had to review the play but the goal counted in the end. Nothing changed on the scoreboard in the second period. Notably, the visitors took almost twice as many shots as Ust-Kamenogorsk. Kuznetskie Medvedi had two powerplay opportunities but goaltender Vladislav Nurek was on top of his game and made some really huge saves to keep his team in the game.

Altay dominated in the third stanza. First their top line produced. Stas Petrosyan scored twice in as many minutes to put Ust-Kamenogorsk in the lead. Late in regulation he completed his natural hat-trick with a goal on the empty net. German Shaporev got another empty-netter and Ivan Podshivalov scored another one when Gleb Bannikov returned in goal. Altay win 5-1 on home ice.

Omskie Yastreby get a tough win in Chelyabinsk 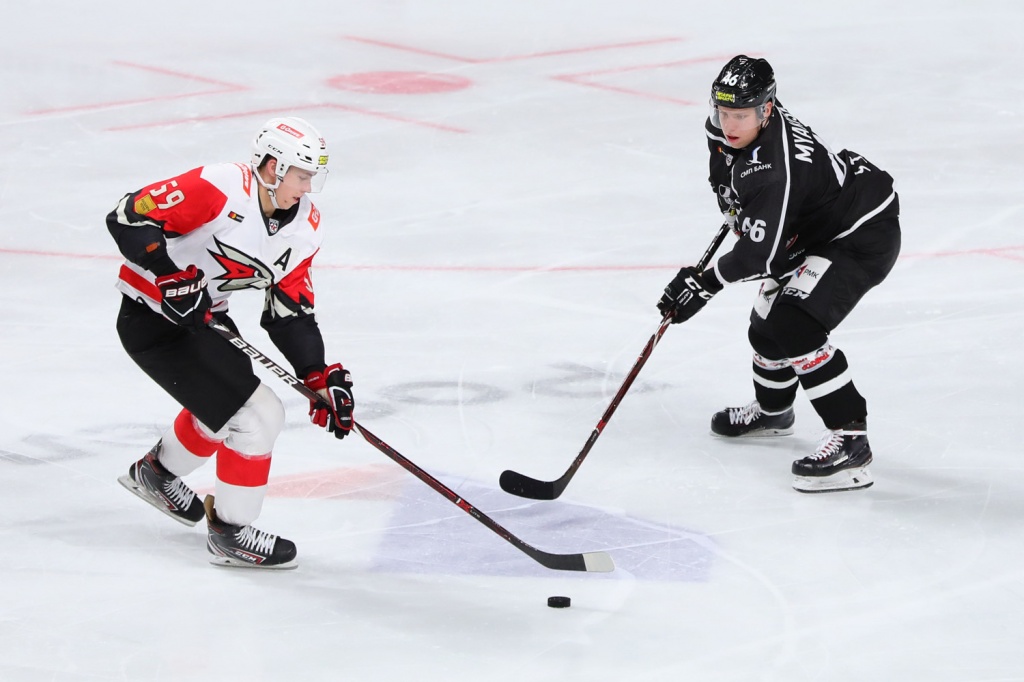 In one of the most exciting games of the day Belye Medvedi Chelyabinsk faced Omskie Yastreby. Matchups between the two are always intense and fun regardless of where the teams are placed in the standings. The ‘Hawks’ converted on Chelyabinsk’s initial penalty of the game – German Voloshin slipped one under Ilya Gorbunov. Home team responded towards the end of the period – Ivan Styozhkin sniped one on the short-side.

Second period of action featured good hockey with equal number of scoring chances but neither of teams was able to score. Three minutes into the third frame Kirill Kazakov gave Omskie Yastreby their second lead of the game and Yegor Chinakhov set the final score as he sent it in with a screen-shot on the far-side. Omskie Yastreby win a hard-fought game 3-1. 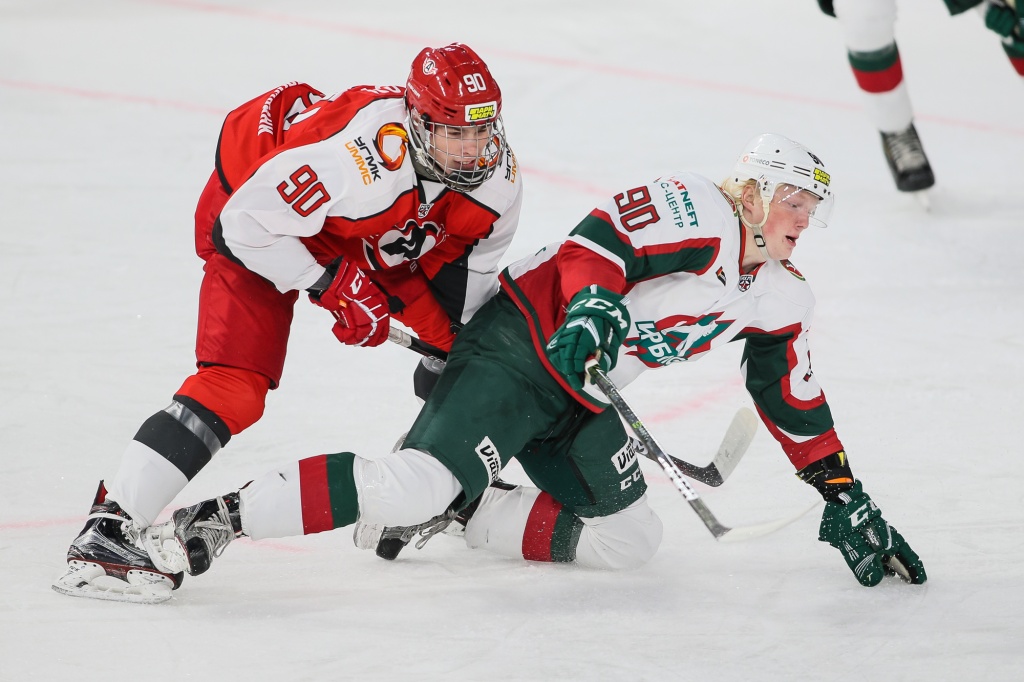 Avto Yekaterinburg, who continue their pursuit of Sibirskie Snaipery, faced Irbis Kazan. A couple of off-setting minors were issued in the opening period of play and the visitors opened scoring 10 minutes in – Islam Khasanov got the tally. Yekaterinburg had the momentum in the second frame and had two powerplay opportunities. However, they managed to get back even only in the third stanza.

Artur Akhtyamov replaced Vladimir Mosin in Kazan’s goal after 40 minutes and Alexander Fomintsev solved him six minutes into the period as he buried the rebound on Danila Okhov’s shot. Home team didn’t get to enjoy the lead for long. Another penalty led to a great passing play by Irbis and Khasanov hammered it top-shelf for his second of the game. Kazan scored twice late in regulation – Kirill Krutov and Danil Gizatullin got a marker each less than a minute apart. Irbis win 4-1 in Yekaterinburg. 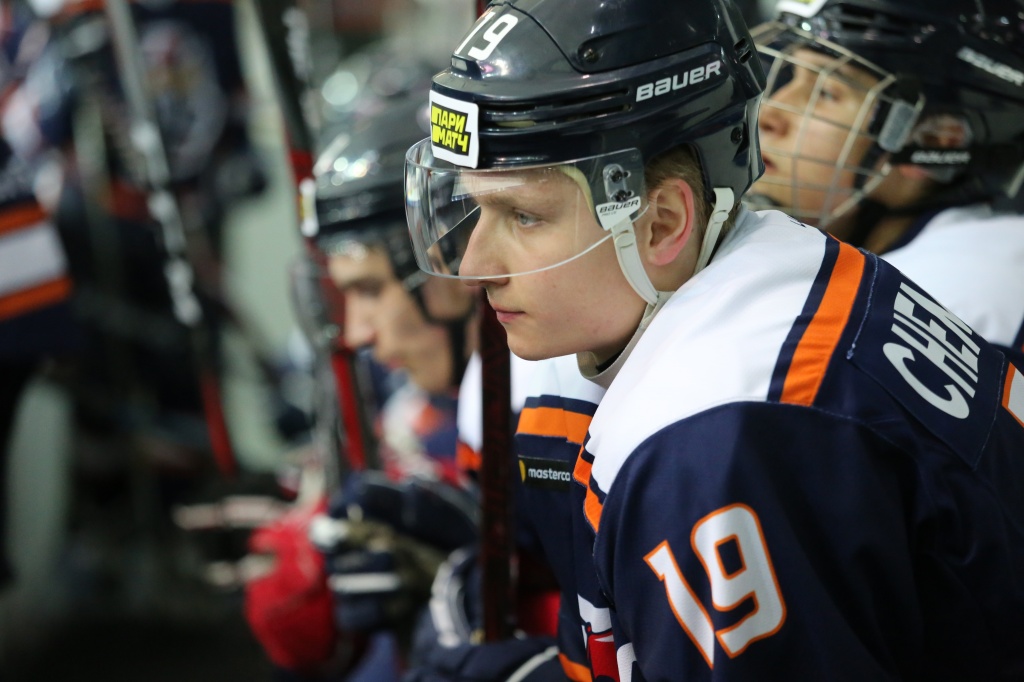 Sarmaty Orenburg enjoyed a hard-fought win over Mamonty Yugry the day before and once again faced off against last season’s bronze medalists. Khanty-Mansiysk opened scoring in the second period of play – Gleb Barmin converted on Daniil Katayev’s penalty, who was sent to the box late in the frame for roughing. The visitors began piling up penalties in the third frame and Orenburg capitalized on Evgeny Timoshenko’s minor. Pavel Sakharov soon found the back of the net as well – the play had to be reviewed but officials found no conclusive evidence to wave the goal off.

Regulation and overtime solved nothing, so the game went to the shootout. Vasily Atanasov and Ivan Nazarov converted on the attempts as the shootout dragged on for 13 rounds. Atanasov was the one who scored the winner for Khanty-Mansiysk.

Tolpar couldn’t catch up to Chayka 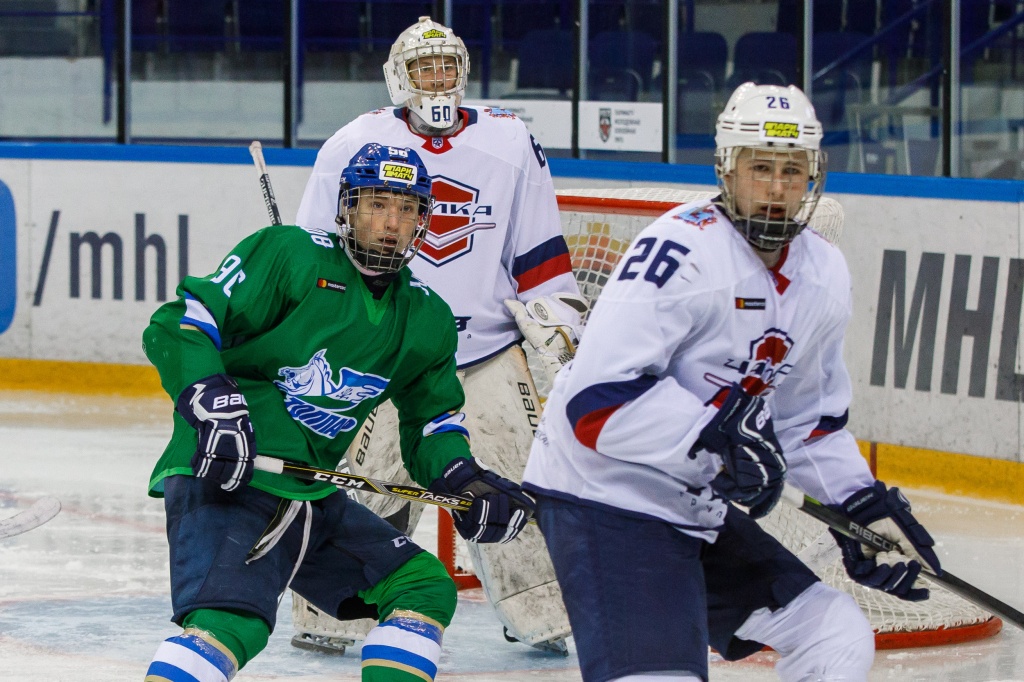 Tolpar played hosts to Chayka Nizhny Novgorod in Ufa. The visitors currently struggle and are placed in the bottom half of the standings. Ufa had the momentum on their side in the opening period of play but it was Nizhny Novgorod who got on the board first – Andrei Nikonov sent it past Dmitry Braginsky. Nothing changed on the scoreboard in the following frame, although the visitors gave more work to Tolpar goaltender. The teams headed into the third stanza in a 4-on-4 format.

It turned out to be really high-scoring with all tallies coming towards the end. Yan Kopylov improved Chayka’s lead to 2-0 and after Tolpar got two consecutive penalties Nikita Shavin slipped another one behind Braginsky. Home team engaged in pursuit – Bogdan Ponomarenko and Semyon Chistyakov scored in a span of one minute to make it a 1-goal game again. Tolpar’s final push led to Chayka scoring on the empty net – Andrei Panchuk with the dagger. Chayka hold on and win a hard-fought game 4-2 on the road.