«IT’S A TRADITION TO PUT ON SOFIA ROTARU IF WE WIN”. QUOTES FROM TOP PLAYERS OF THE WEEK «IT’S A TRADITION TO PUT ON SOFIA ROTARU IF WE WIN”. QUOTES FROM TOP PLAYERS OF THE WEEK

“When does the tradition of putting on Sofia Rotaru songs after won games stem from? My mom loves the singer. I listen to her songs a lot when I was a kid,” said Ladiya Togliatti goaltender Artyom Zabrodin. “I still listen to the songs sometimes and my teammates took it from me as well, it’s something we do now. Now every time I do well in the game, the boys put on “I will name a planet after you”.

- Are you frustrated to see your shutout streak come to an end after the series against Tyumensky Legion? 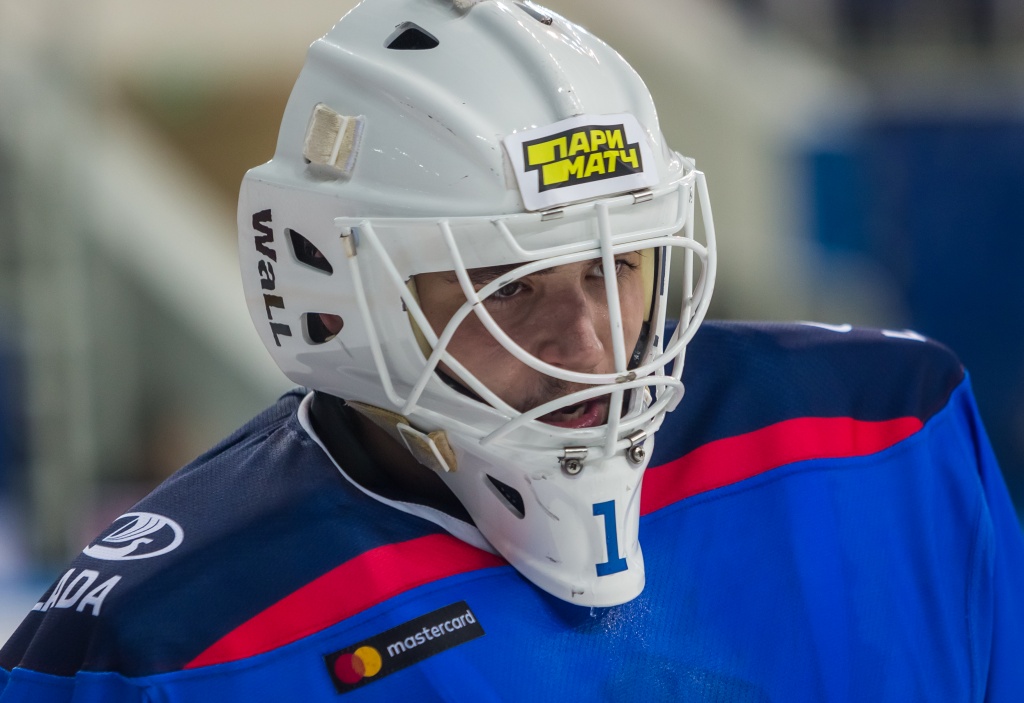 - I followed my statistics closely last season. I don’t do it anymore, I just do my best and try to help my team win. Even if we allow four or five goals, it doesn’t really matter if we still get a win. Obviously, I thought it would be great to keep my shutout streak alive after the series against Tyumen but, unfortunately, it came to an end in the series against Omskie Yastreby.

- How did it come to be that you allowed 11 goals in your first game against Omsk and then won the second?
- I think we didn’t have the right mindset going into the first game and it showed. Perhaps, our players who were born in 2002 and 2003 were a little nervous, and we have a lot of them. I wouldn’t say that the opponent did something extraordinary. I was ready to keep playing but they decided to swap me after the third goal so I would be better prepared mentally for the next game. And it worked. We won that second game. Was it difficult psychologically? I don’t think it was easy for our young netminder Igor Kulakov. He was born in 2002, he’s a young guy. Of course, it’s embarrassing to lose by such margin but our coaching staff told us to forget about the game and get ready for the next one without such thoughts.

- However, the fans must have been frustrated with the result?
- Yes, I read comments online after the first game. There were some unhappy people but 90% still supported us. After all, it’s junior hockey and everyone understands it. These are young ambitious guys and sometimes these things just happen. I had a lot of work to do in the second game, especially Arseny Gritsyuk – he had four breakaways. But I actually like to stay on my toes. It’s what I have been doing my entire career. This year I don’t get nervous as much as I did last season when the game was tied. Back then I felt a little overwhelmed but now I’m over it.

- Do you have any traditions after you win?
- Yes, we have a hat but I think we’re probably going to replace it with something else. We got it last season and it’s a little outdated now. Our first team had a steering wheel. Maybe we’re going to get something like that.

“First month of the season turned out to be frustrating to the maximum for ORG – we lost our very first game to Kapitan [Stupino] in blowout fashion,” says ORG Junior defenseman Artyom Serikov. “I can’t say that Stupino absolutely outplayed us. The score [11-4] doesn’t really reflect what happened on the ice. The game was even for two periods and then we began allowing one goal after another. Although, we were willing to battle till the end. If we can’t outskill the opposition, we try to outwill it. 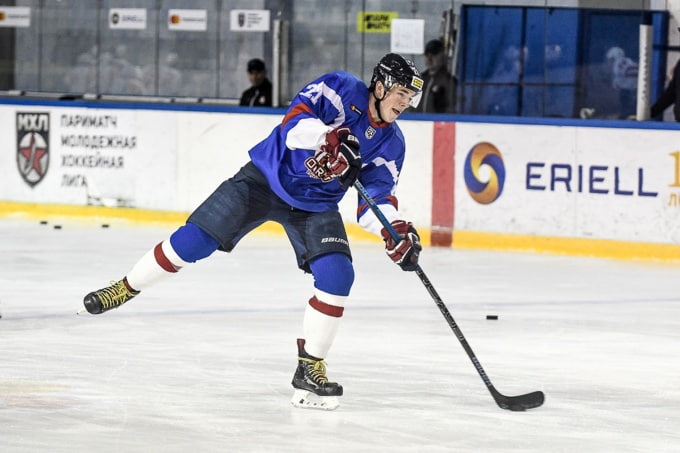 - The pundits seem to think that your 12-game losing streak stems from the fact you play just three lines.
- I don’t think that’s the reason. It’s just that we started the pre-season a little late. Every other team worked since July and we opened our camp only in early August. This is why we’re still looking for our style of play and shuffle lines. I’m certain that ORG will give everyone a run for their money in the second half of the season.

- Last year you spent with Krylia Sovetov Moscow. You have faced your former team twice already this year.
- I began the pre-season with Krylia Sovetov but I didn’t do well there and joined ORG. The games against Setun were special for me. I prepared hard for them.

- Alexander Barkov is the head-coach of your team. He has KHL and VHL experience.
- You can feel that he’s an experienced coach. Everyone on coaching staff prove to be real professionals in their approach to the team. They draw right conclusions even after major losses, try to turn things around and learn from our mistakes. Despite the results, they never yell at us and just keep working.

- ORG roster boasts players from Russia, China and Finland. Are there problems with communication?
- No problem. There is a man on our coaching staff who speaks Russian, Chinese and Finnish. He translates everything. There are no national groups in the dressing-room. We have bonded recently and support each other. You have to give credit to Chinese players – they are far from home but they always support us and are an integral part of our team.

- Are there any Chinese traditions on your Beijing team?
- We huddle up before every game and chant “Go ORG Go” in Chinese. So I have learned a few Chinese words. We all learn the language bit by bit.

- Despite frustrating team results, you were selected as the top defenseman of the week.
- I did well in one game against Taifun [Primorie Region] just as everyone else on the team. I scored five points in that game thanks to my teammates – they were setting me up great. It’s unusual for a defenseman to get so many points. So, you can say, that I got lucky.

“For the first time in two seasons I was selected as player of the week,” said Sputnik Almetyevsk forward Artur Galimzyanov. “Obviously, it was great news. I tried not to think about my statistics before. Last week was sort of wild for me. I couldn’t buy a goal in the first five games – it just wouldn’t go in no matter what I did. So I thought to myself that I had to do something about it. I pulled myself together and decided to go into every game with the right mindset. And it started getting better. You can say, it was a psychological barrier of sorts. Sputnik got to a decent start of the season. We are just four points away from topping the conference. I think comparing to the previous season we have a solid team spirit now. That’s why we’re winning”. 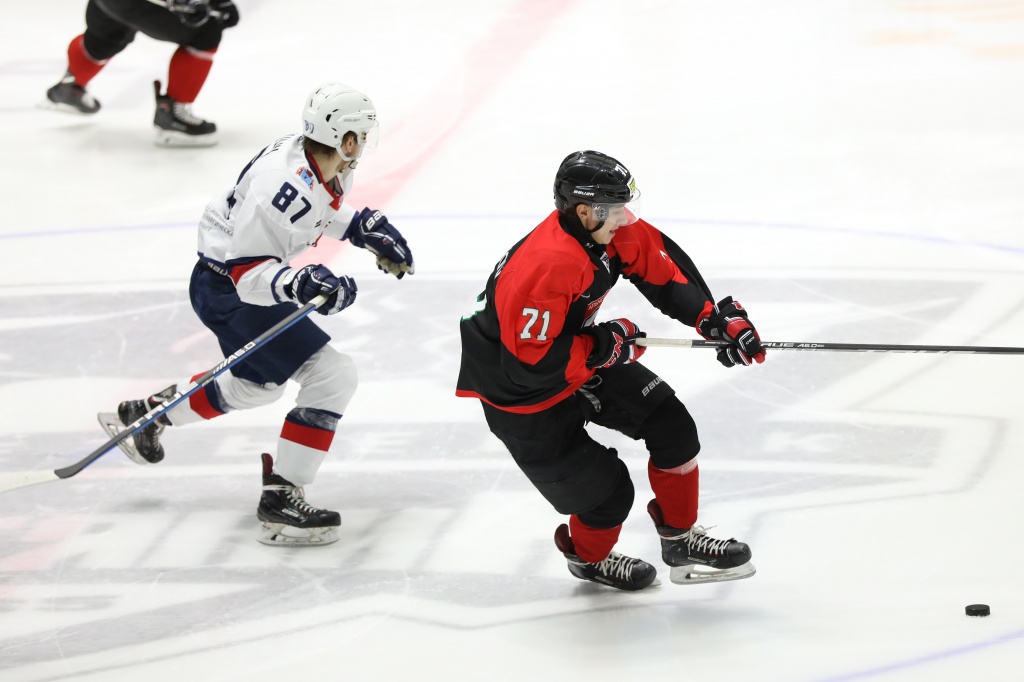 - Would you say that prime physical conditions is part of the success?
- Our coaching staff watches that we didn’t get tired too much so we would be ready to play throughout the season. So they time our practices well. I have a little more ice-time this year than last season. It’s great to be trusted more like that.

- At the start of the season Sputnik beat Irbis Kazan twice in Tatarstan Rivalry.
- Everyone knows that one of the biggest Junior Hockey League rivalries is between Krasnaya Armiya Moscow and SKA-1946 St. Petersburg. But I assure you that Tatarstan rivalry is every bit as good. Coaches tell us before these games that we can’t afford to lose them – especially on home ice. There are three teams in Tatarstan but the games against Irbis are much more intense than against Reaktor Nizhnekamsk. First of all, Kazan is closer to Almetyevsk and, second of all, a lot of Irbis players come over for try-outs so we know many of them.