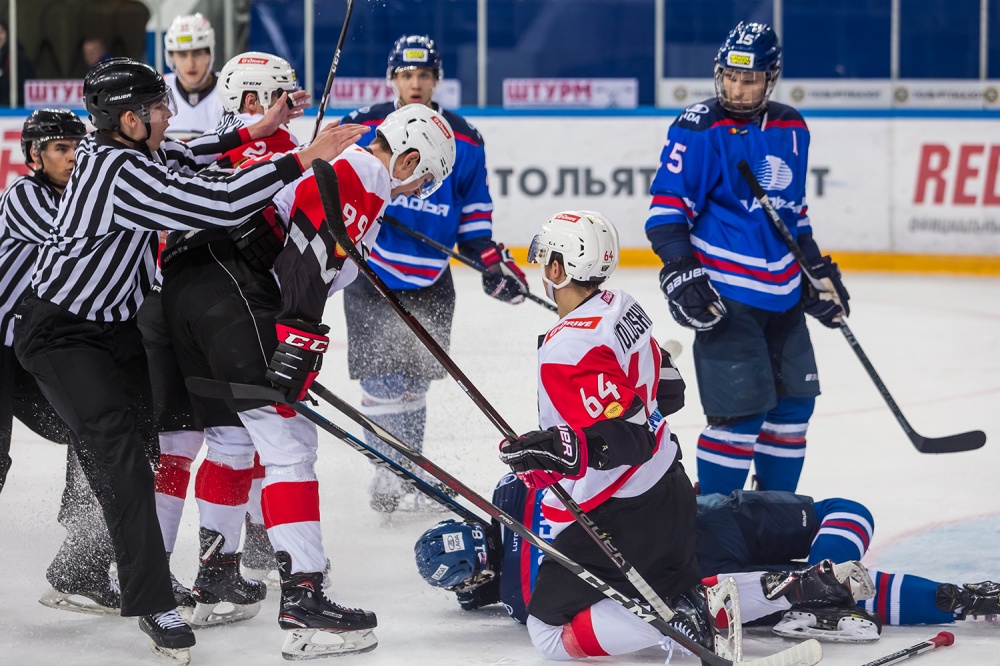 Stalnye Lisy Magnitogorsk faced Altay Ust-Kamenogorsk on home ice. The visitors have played the most mature hockey in franchise history this season. Home team got on the board first – Kazakhstan team allowed a counter-attack, Dmitry Sheshin outraced two defensemen and put it top-shelf. Denis Budenchuk tipped Stas Petrosyan’s shot in just 15 seconds into the next period. Soon after that Ivan Komarovsky put the visitors in the lead as he was left all alone in front of the net by Magnitogorsk defensemen.

Home team won the third period. Alexei Sakharov made it a 2-2 hockey game and then Yuri Platonov converted on a powerplay with a mighty clapper. Ust-Kamenogorsk allowed a 2-on-1 rush late in regulation and Dmitry Sheshin scored his second of the game – he went for the shot and was right on the money. Stalnye Lisy struggle but still win 4-2.

Snezhnye Barsy Nur-Sultan went on the road to Chelyabinsk and got off to a difficult start. The puck bounced straight to Ilya Gatiyatulin’s stick off the boards just five minutes in and he sent it past Vilen Prokofyev. Late in the period Gatiyatullin got a minor penalty but the visitors failed to convert on it.

Chelyabinsk killed off two more penalties in the second period but when Snezhnye Barsy went down a man, ‘Polar Bears’ made it a 2-0 hockey game – Alexander Kirpichnikov buried the rebound from the slot.

Belye Medvedi played well in the third period. Only after Kirpichnikov scored his second of the afternoon, did Oleg Boyko manage to solve Ilya Gorbunov. That was the only goal Snezhnye Barsy could get in the game. Chelyabinsk got a 5-on-3 opportunity late in regulation and converted twice on it – Valery Sapozhnikov and Tigran Yarulin got the markers. Belye Medvedi win 5-1 on home ice. 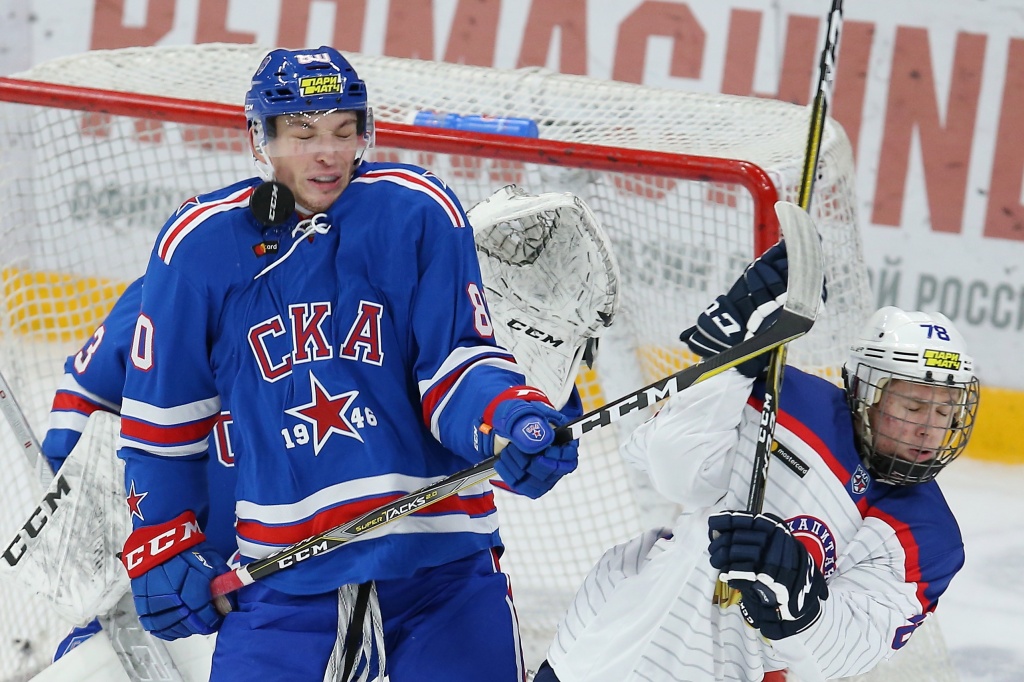 Still undefeated SKA-1946 St. Petersburg went up against HC Kapitan Stupino. First goal of the game came 11 minutes in. Alexei Tsyplakov received the puck in the slot and put it past Artemy Pleshkov, while Vasily Podkolzin picked up an assist. Early in the second period Tsyplakov got a helper of his own as he assisted on Artyom Zhuk’s marker, who buried his own rebound.

Zhuk scored his second of the game as Podkozlin got his second assist late in the period. Only after that did Stupino manage to get a goal back – Amir Garayev, who leads Kapitan in points, found the back of the net. The visitors pulled back to within one six minutes into the third stanza – Ivan Kazakov skillfully tipped Danila Filippov’s shot. However, that was all they could get. Marat Khusnutdinov set the final score with five minutes remaining to play in regulation. ‘Army men’ win 4-2 on home ice. 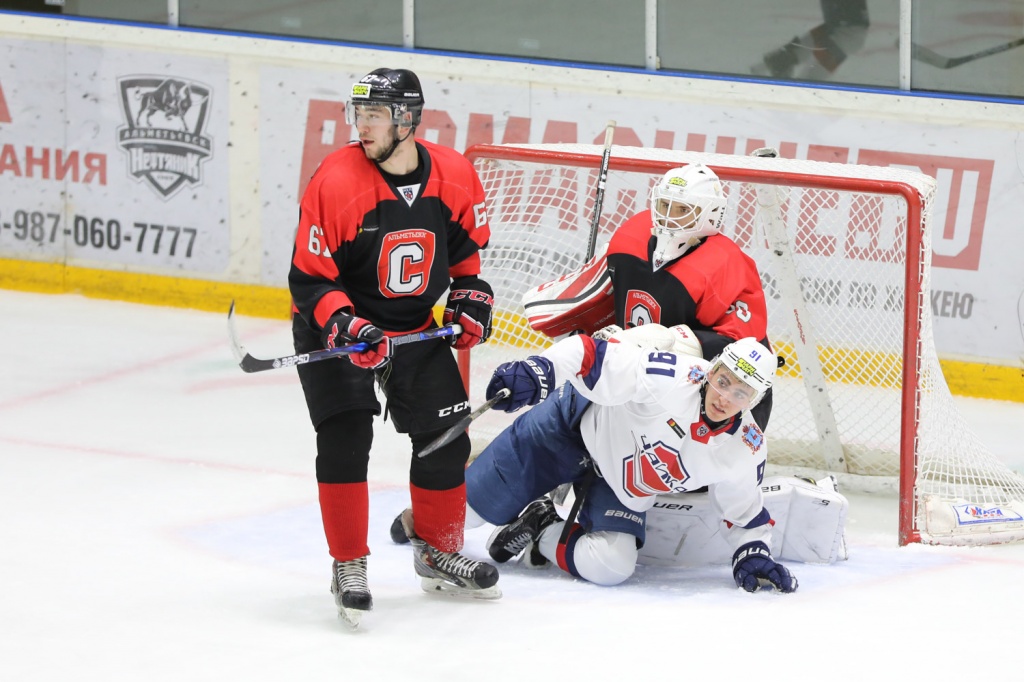 Chayka Nizhny Novgorod continued their Tatarstan trip as they faced Sputnik Almetyevsk. Home team had the momentum on their side in the opening period and even had a long 5-on-3 opportunity but failed to get on the board. Emotions were flying high in the second stanza. A brawl broke out eight minutes in and it sent three players to the penalty box. When teams went back to playing full-strength, Nizhny Novgorod broke the deadlock – Alexei Smirnov got the tally to give Chayka a narrow lead heading into the third.

All other key events took place in the third frame. Almetyevsk got in the lead as Artur Rezanov and Ruslan Galimzyanov got a marker each. However, Aidar Galimov got a minor penalty after that and Denis Nikulin capitalized on it to force overtime. Ivan Shulga scored the winner for Nizhny Novgorod in the extra period of play. Chayka get a well-deserved 3-2 win in overtime.

Ladiya played hosts to Omskie Yastreby in Togliatti. Semyon Astashevsky opened up the scoring eight minutes in. Home team managed to squeak one in late in the period – Dmitry Semenovsky sent it just under the bar to tie the game up 1-1. The visitors dominated in the second frame. After Yegor Chinakhov and Timofey Davydov got a tally each, Artyom Zabrodin was replaced by Igor Kulakov between the pipes. The latter allowed a goal soon as well. Chinakhov scored his second of the game, while Arseny Gritsyuk improved the lead to 5-1.

Home team had a nightmare of a third period. The ‘Hawks’ seemed to score on their every shot. Alexander Yaremchuk and Danila Dudin got a goal each, while Stanislav Rangayev scored another one for Ladiya. However, in the final ten minutes of regulation Omskie Yastreby steamrolled over the opposition. Yaremchuk and Gritsyuk got their second tallies of the game, while Vladislav Vlasov and Albert Alikov added a marker each. The visitors marched on to 11-2 win.

Last game of the day took place in Orenburg where Sarmaty defended the ice against Tyumensky Legion, who were still looking for their first win of the year. The visitors won the first period of play – Artyom Vasyukov and Artyom Pylayev scored for Tyumensky Legion, while Maxim Makhrin got a tally for Sarmaty. The history mirrored itself in the following frame. Home team got a goal from Daniil Katayev and after Roman Chervin scored on a powerplay, Makhrin got his second of the night. 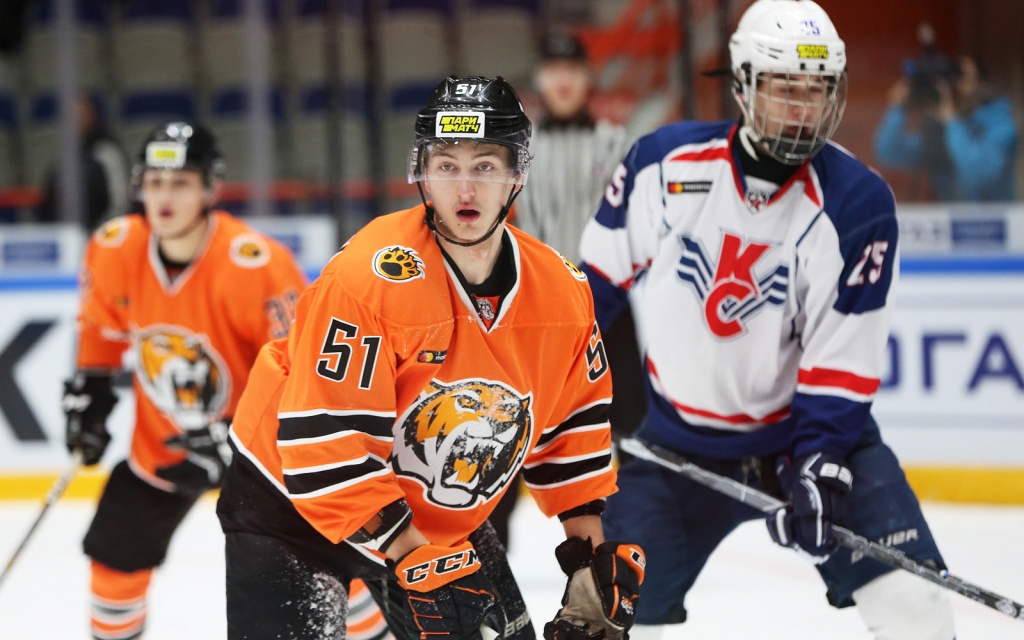 The gameday kicked off in Russia’s Far East as Amurskie Tigry played hosts to Krylia Sovetov Moscow at Platinum-Arena. First period of play featured a lot of penalties and the teams traded goals towards the end of it – Rodion Poroshin scored for the visitors, while Yegor Mozharov got one in for the ‘Tigers’. The latter scored his second of the game five minutes into the second period but ‘Soviet Wings’ converted on a 4-on-3 powerplay and tied it up again – Vitaly Lebyodkin got the marker.

Ildar Kashafetdinov put Moscow in the lead for the second time before the intermission and they managed to hold on to it. Yegor Zudilov sent another one past Yuri Cherkashin late in regulation and Khabarovsk ran out of time. Krylia Sovetov get a hard-earned 4-2 win on the road.