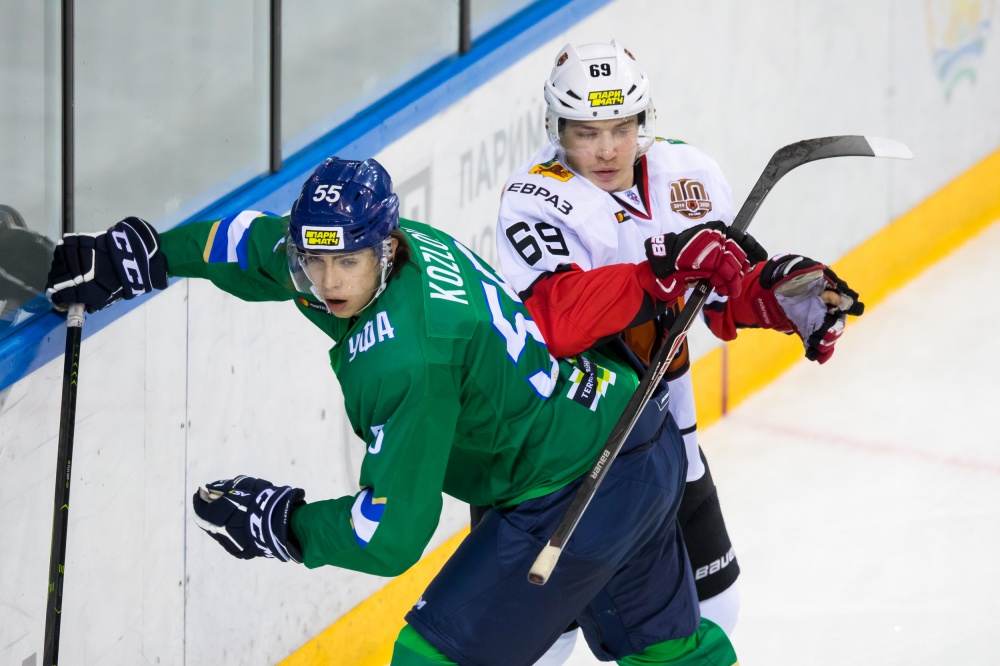 TOLPAR AND SKA-1946 WIN ON HOME ICE, LOKO SHINE IN MYTISCHI. SEPTEMBER 25th ROUND-UP
Share
September 25th was a busy day in Parimatch Junior Hockey League as it featured 10 games. We take a look at all Wednesday matchup in this review. 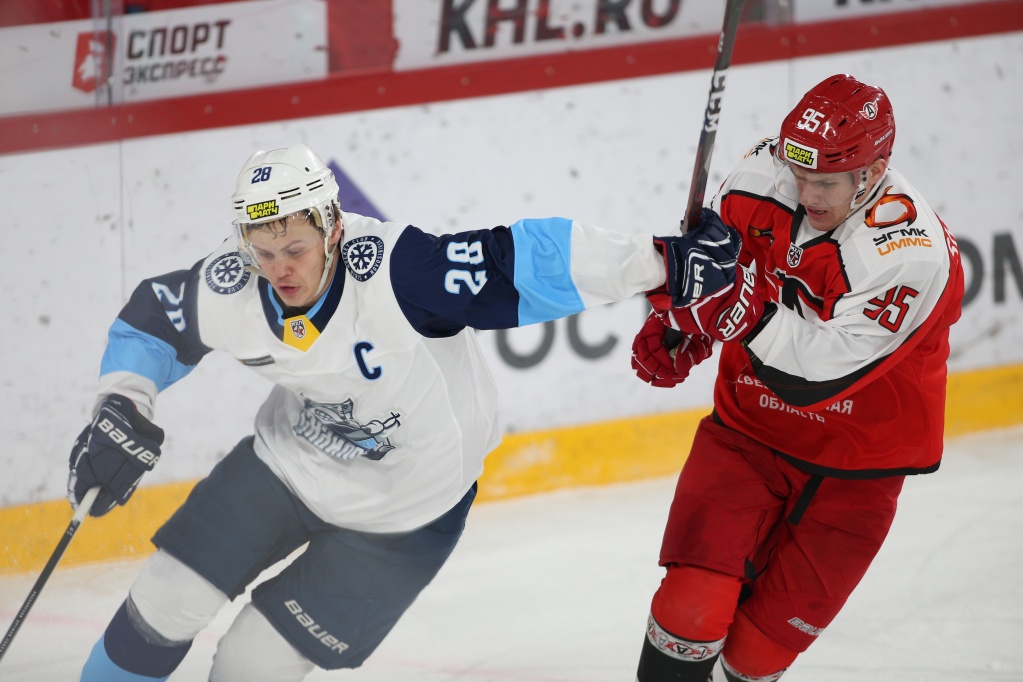 Top teams of the Eastern Conference collided in the second game of the day as Avto Yekaterinburg and Sibirskie Snaipery stepped onto the ice of CEC Uralets. First period of play featured no goals, while the visitors had the momentum. Georgy Romanov did let one shot in but the goal was disallowed as the referees ruled goaltender interference on the play. Home team continued focusing on defense in the second frame.

The fans also got to see a few good scoring chances by Yekaterinburg. For instance, former Mamonty Yugry’s Ilya Loza skated in on a breakaway but couldn’t beat Vladislav Scherbakov. With 19 seconds remaining to play in the period the visitors found themselves down 2-man but Avto failed to convert on the opportunity. The price of mistake sky-rocketed and the teams played with caution. The game went to overtime and then shootout, in which Ivan Shirokalov scored the winner.

Loko blow past Atlant on the road 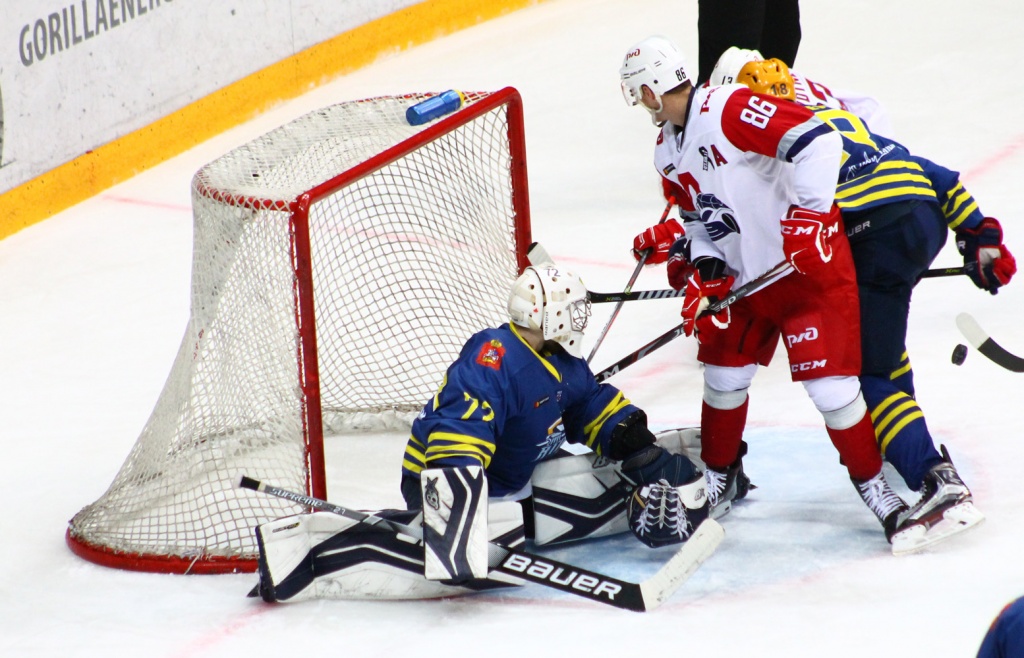 Loko Yaroslavl delegated Yegor Guskov between the pipes, as he recently returned from U18 Team Russia. Guskov stopped 23 shots out of 24 he faced. Daniil Shushin scored the only goal on the reigning Kharlamov Cup champions.

Igor Melyakov’s men put the game away in the second period. Ilya Nikolayev, Danila Dyadenkin, Ruslan Ambrosimov and Yeremey Shumilin got a tally each against Maxim Koloberdanets. The score remained the same in the third period. Loko enjoy a solid 5-1 win on the road. 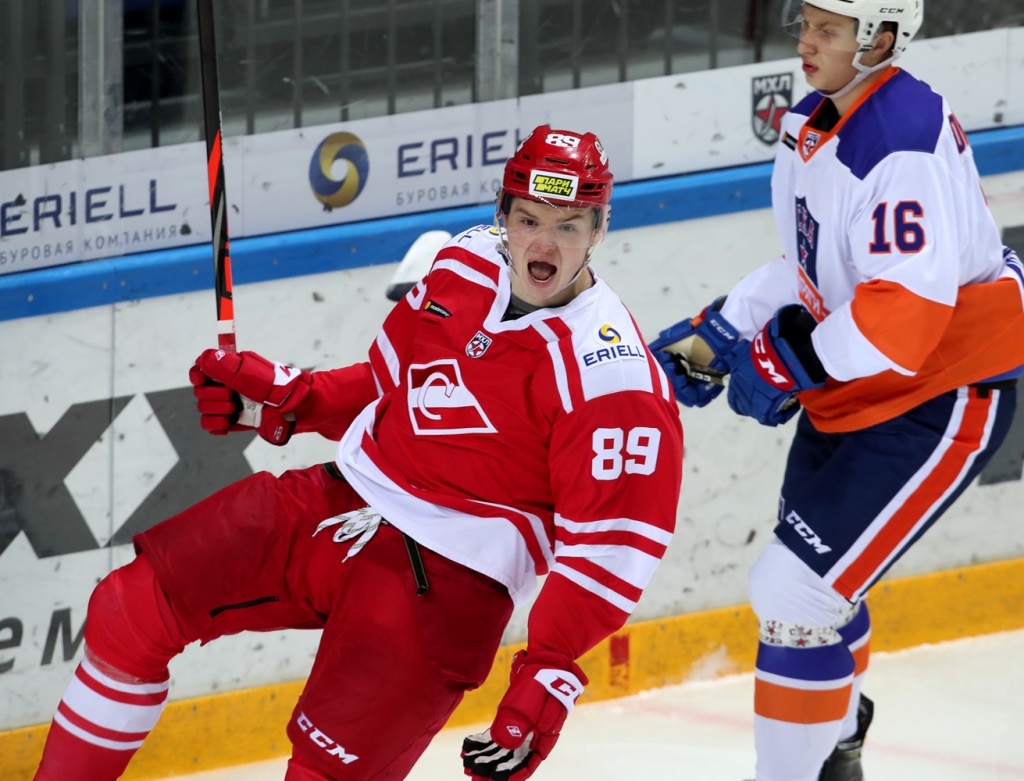 JHC Spartak Moscow played hosts to SKA-Varyagi St. Petersburg. The red-and-white managed to score a quick goal – Alexander Oskin got on the board just five minutes in. Moscow had the momentum on their side in the opening period, outshot the opposition, had a few powerplay opportunities and yet couldn’t improve their lead. The visitors got three consecutive penalties in the second period but Spartak scored their next goal at even-strength – Yegor Kravchenko got another one past Pavel Davydyuk.

Despite all effort, SKA-Varyagi couldn’t turn things around and beat Dmitry Kulikov even once. The goaltender ended up stopping all 16 shots for a shutout win. Kirill Tagirov set the final score with an empty-netter. Notably, Spartak were playing shorthanded at the time. The red-and-white win 3-0.

Omskie Yastreby edge Sarmaty in Orenburg, score the winner with 2 seconds on the clock 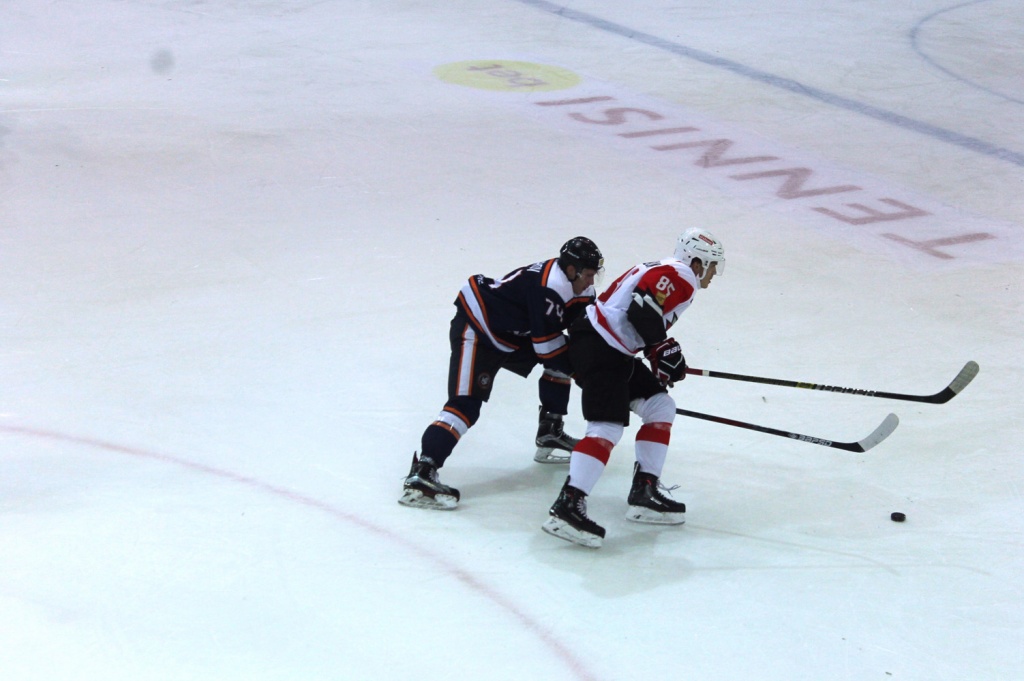 Sarmaty Orenburg faced Omskie Yastreby on home ice. The ‘Hawks’ had lost their first game of the season in the first meeting between the two the day before. It seemed that Sarmaty found the key to Omskie Yastreby as they outshot the opposition in the opening period of play and despite getting two minors, managed to get on the board first – Vladimir Ipatov sent one past Nikita Dianov. Nikolai Petrov’s penalty backfired on home team – Arseny Gritsyuk tied the game up late in the second.

Third period solved nothing, even though both teams created a lot of scoring chances. The game went to overtime and the visitors prevailed. Sarmaty allowed a goal with just two seconds remaining on the clock. Yegor Chinakhov sniped one from mid-range and got buried under a pile of his teammates. 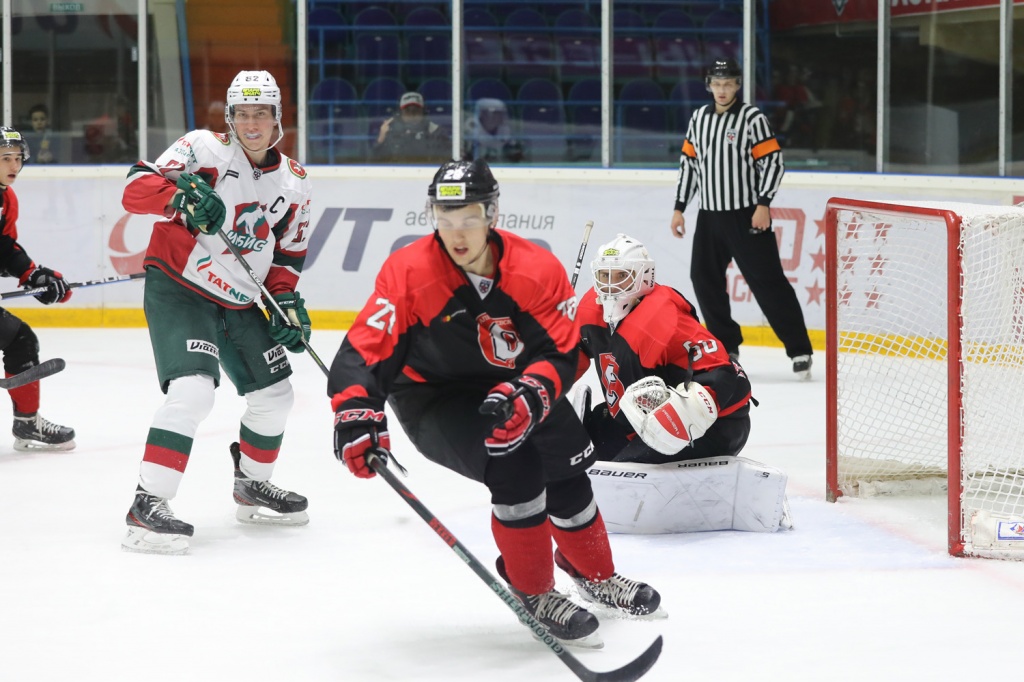 First period of play turned out to be uneventful – the teams weren’t creating many scoring chances and took very few shots on net. The game featured a lot of physical battles and the visitors came out on top in most of them.

Early in the second frame Irbis Kazan goaltender Artur Akhtyamov made a peculiar save – the puck went up in the air off a deflection and landed right into the jersey of Akhtyamov. The netminder required assistance from the officials to get rid of the puck.

Home team won the second third. Aidar Galimov scored just six minutes into and seven minutes later Timur Zakirov converted on a powerplay, doubling the lead. Early in the third stanza Irbis got back to within one – Danil Gizatullin slid one past Rail Nasyrov. Despite the fact that the visitors had a man-advantage and then pulled their goaltender for the extra-attacker, Ilnaz Zagitov’s men failed to force overtime.

Sputnik Almetyevsk win the second game of the back-to-back series against their Tatarstan rivals and our now just a stone’s throw away from Sibirskie Snaipery, who top the Eastern Conference.

Reaktor bounce back after being steamrolled by Chayka 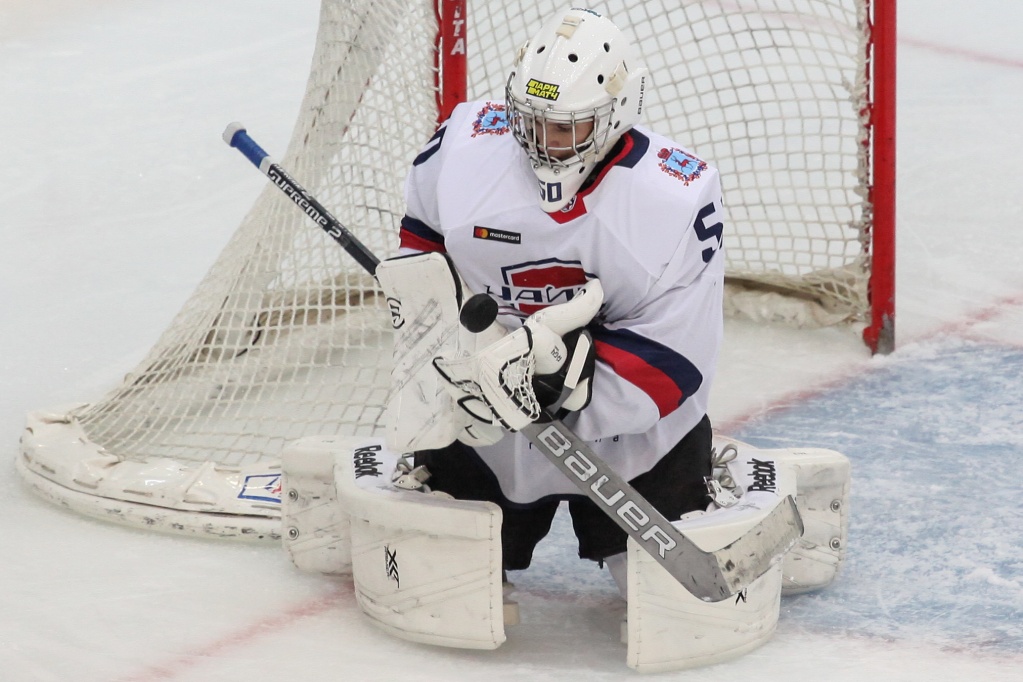 Home team had lost by a blowout the day before but by the 7th minute of the second game established a 2-0 lead – Andrei Chivilev ad Bulat Shambazov got a tally each past Dmitry Menshatov. But everything went upside down midway through the game – Chayka Nizhny Novgorod scored three powerplay goals in a row.

Reaktor Nizhnekamsk had a strong finish as they pinned the visitors to their net. Seven minutes into the third frame Danil Mikhailov had to score on a wide-open net but Nizhny Novgorod defensemen stepped up for their netminder. The score was even by that point as Daniel Butsayev scored Nizhnekamsk’s third goal.

With a few seconds remaining to play in regulation the visitors found themselves down a man but managed to make it to overtime. Reaktor passed the puck well in the extra period and got what they wanted – Maxim Polkin set up Aidar Valeyev on open ice and Valeyev sent it in with a wrister past Yaroslav Ozolin. Nizhnekamsk win 4-3 and get their revenge for losing 6-0 the day before.

Cherepovets struggle early in the season 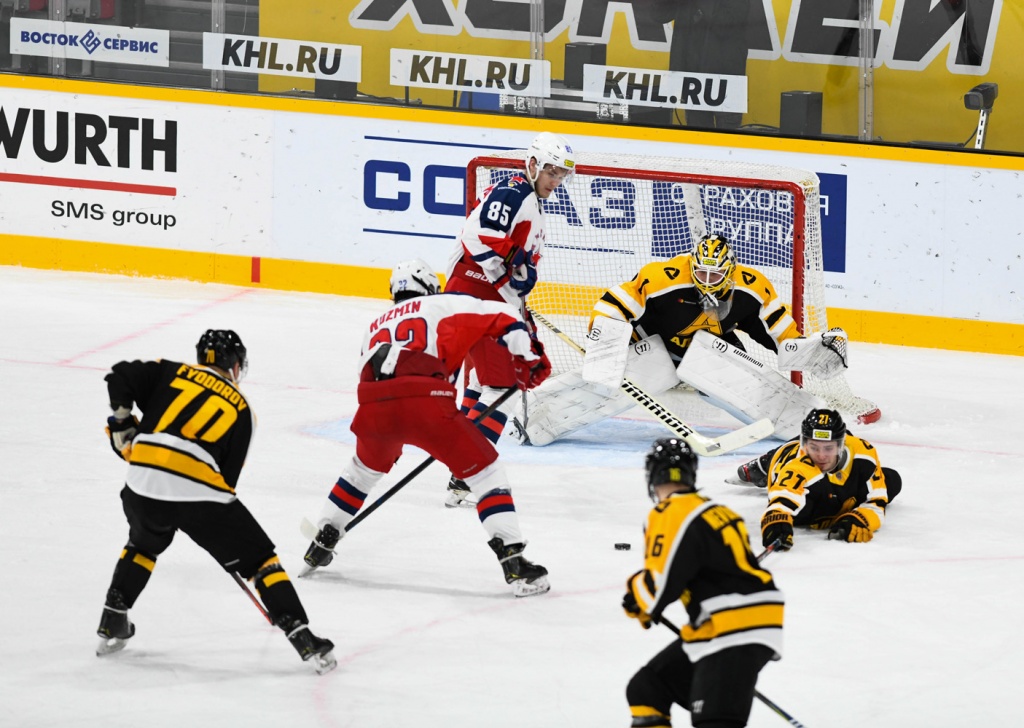 Almaz Cherepovets faced Krasnaya Armiya Moscow in their home-opener. Last meeting between the two was in Kharlamov Cup Playoffs. Almaz managed to win the series back then, eliminating Moscow in the opening round.

Almaz didn’t get off to a good start in this one – Evgeny Stavrovsky’s men allowed a goal just 24 seconds in as Krasnaya Armiya Takhir Mingachyov found the back of the net. The visitors got tow minors in the first period but Cherepovets couldn’t get anything past Matvey Kiselyov, who was having just his 2nd career JHL start and enjoyed his 1st shutout.

Second period was key as Krasnaya Armiya scored two goals in one minute, putting the game away. Mingachyov finished the afternoon with two goals. The teams will see each other again tomorrow. 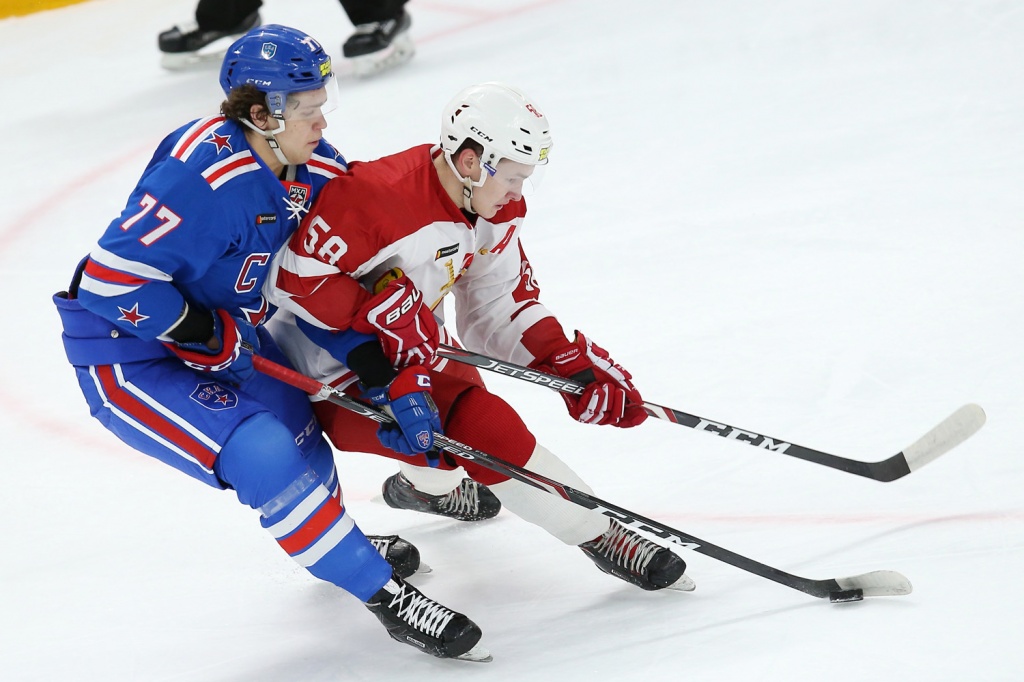 SKA-1946 St. Petersburg got reinforcements from SKA and SKA-Neva prior to their home-opener. As such, Lev Berdichevsky’s men got Vasily Podkolzin and Danila Galenyuk. Former HC Kapitan Stupino and current SKA goaltender Pyotr Kochetkov was watching the game from the stands.

Dmitry Nikolayev had very little work to do in the opening period – home team grabbed the momentum and peppered Daniil Chechelev with shots. First goal of the game came seven minutes in. Kirill Kirsanov passed it to Mikhail Kozliv, who sent it top-shelf from a face-off circle. A few minutes later Ilya Rychkov got another one over the goal-line but it was waved off. However, home team improved their lead to 3-0 before the intermission – Timur Ibragimov and Alexei Tsyplakov found the back of the net.

The teams traded goals in the second period – Kirill Kondyrev solved Nikolayev, while the ‘army men’ answered with Ibragimov’s second goal of the game and Vyacheslav Alexeyev’s marker.

Russkie Vityazi swapped Chechelev for Artyom Shabulin in the second intermission. The visitors scored a quick goal but that was all they could get, even though SKA-1946 got an unusual large amount of penalties – 16 overall, including 10 in the third stanza. St. Petersburg get a solid 5-2 win in their home-opener. 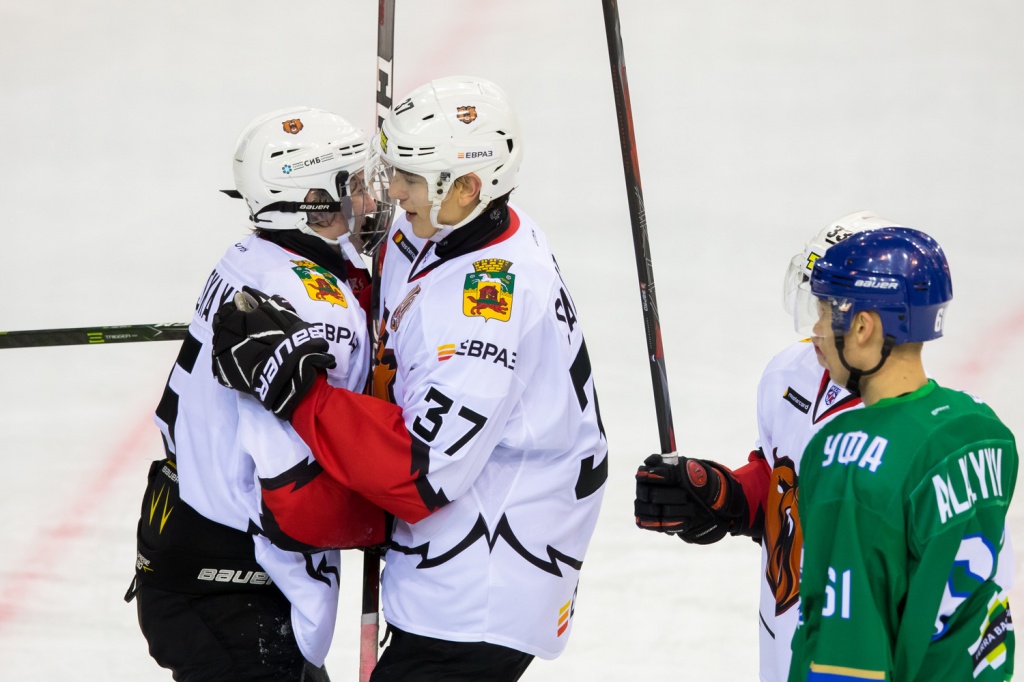 Tolpar Ufa faced Kuznetskie Medvedi on home ice. The ‘Bears’ struggled early in the season and were definitely looking to put an end to it on their first road trip. Home team got off to a great start – Denis Sizikov put one past Alexander Kuleshov just four minutes in. However, not only Ufa managed to tie the game up before the intermission, they also got in the lead. Ivan Kanashev and Andrei Kuznetsov got a tally each just three minutes apart.

Home team further improved their lead in the second frame. First Sergei Safin-Tregubov found the back of the net, while midway through the period Alexander Pashin and Vladimir Shapovalenko added a marker each. After Gleb Bannikov replaced Kirill Kuznetsov in goal, Novokuznetsk finally got on the board as well – Mark Maskayev hit the twine. 12 minutes into the third stanza Gafar Satarov made it a 5-3 hockey game but Tolpar still had the last word in this one – Kuznetsov scored his second. Ufa win 6-3. 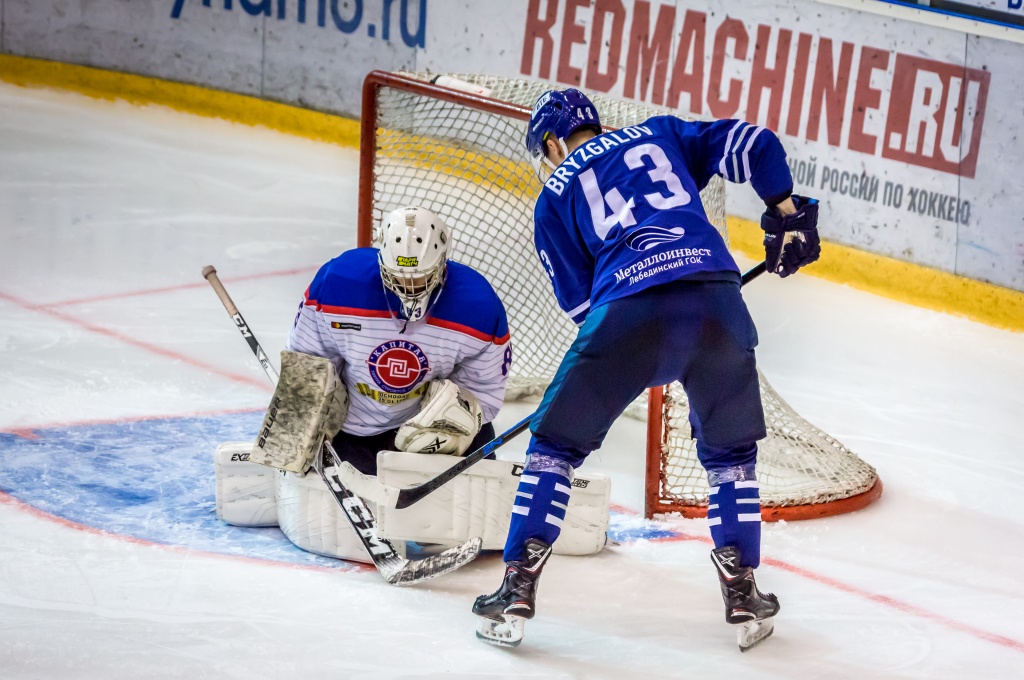 The game turned out to be rather rough as the teams combined for over two hours in penalty minutes. Both teams had two powerplay opportunities in the opening period but failed to get on the board. The visitors did strike in the second frame – just two minutes after the play resumed Kirill Melnichenko solved Ivan Kulikov.

That forced Dynamo wake up and by midway through the period home team was up 3-1. Interestingly, they scored three goals in a span of five minutes, including two powerplay tallies. The teams traded goals on the man-advantage in the third stanza but Dynamo didn’t let Kapitan close the gap. The game ended with a mass brawl and a few fights.