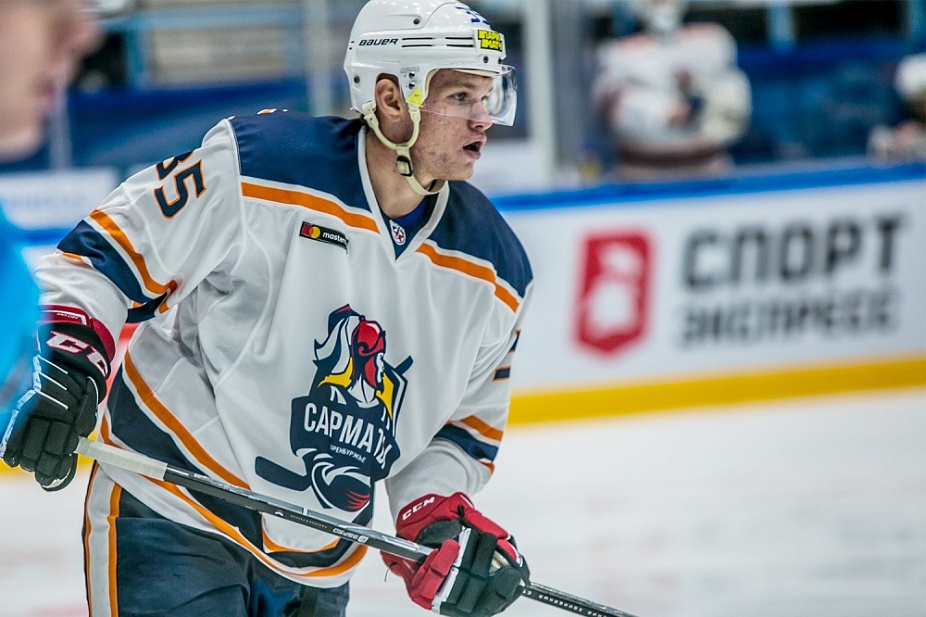 Seven games took place on September 18th in Parimatch Junior Hockey League in five different time zones. We took a look at all Wednesday games in this review. 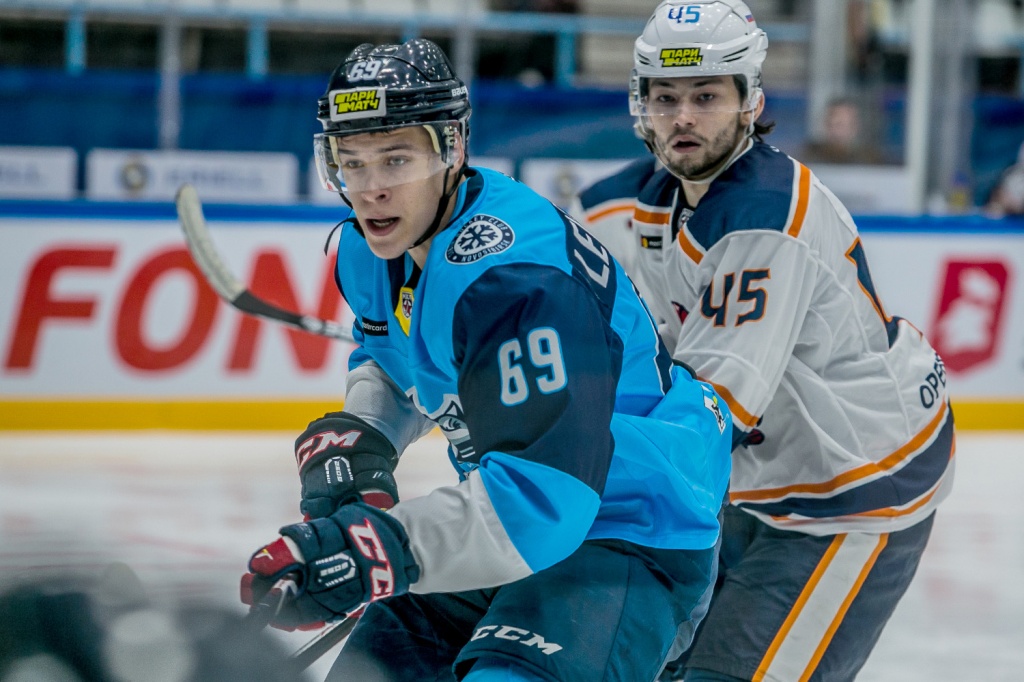 The gameday kicked off in Novosibirsk where local ‘Snipers’ played hosts to Saramty Orenburg. Yegor Verkhorubov opened up the scoring just four minutes in as he sent it past Anton Borodkin. The teams spent the rest of the game trading powerplays but the fans had to wait till midway through the second period to see the next goal – Nikita Potapov made it 2-0 for Novosibirsk. The visitors got a goal back before the intermission – Orenburg top-scorer Nikita Savelyev found the back of the net.

In the final period of regulation home team focused on defense and Vladislav Scherbakov had to make just four stops over 20 minutes. Potapov set the final score as he scored his second of the game on the empty net with four seconds until the buzzer. Sibirskie Snaipery win 3-1.

Taifun come back from behind, edge Kapitan in Vladivostok 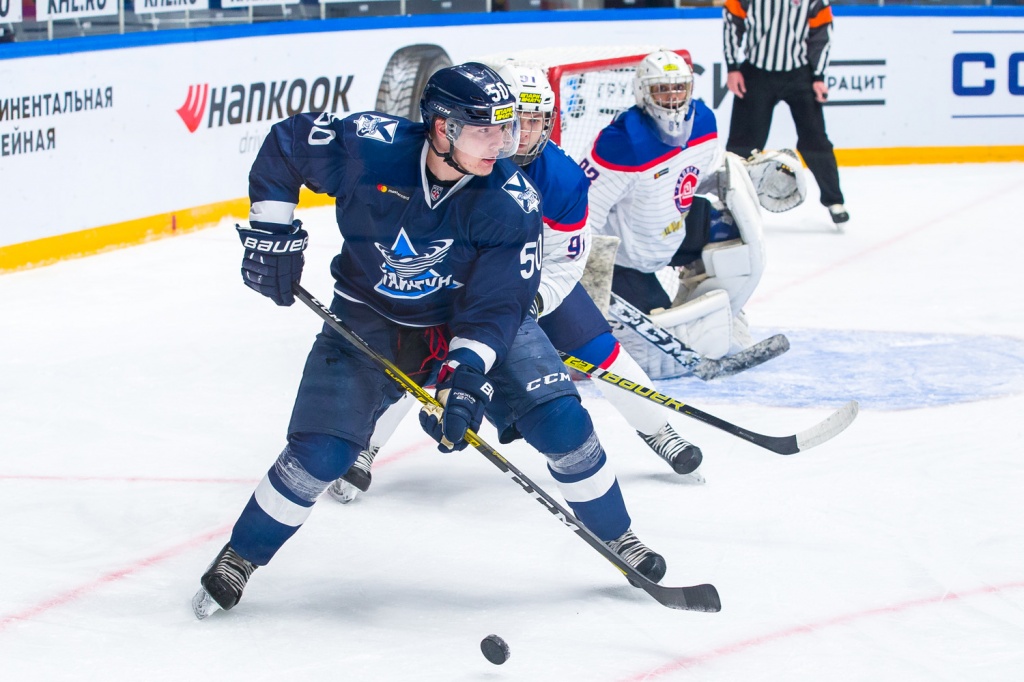 Taifun Primorie Region faced HC Kapitan Stupino in Vladivostok. The visitors managed to score a quick goal – just two minutes into the game Grigory Ponkratov pounced on the rebound, the puck went up in the air and landed right behind Ivan Gamov. Second period of action featured much more goals. Pavel Ponosov and Pavel Yelizarov put Primorie Region in the lead. Ponkratov scored his second of the game and the teams headed to dressing-rooms with Taifun leading 3-2 as Maxim Dontsov scored late in the period.

The visitors never recovered from the blow. Moreover, four minutes into the third stanza Sergei Shushkov further improved Primorie Region lead. Home team scored their fifth late in regulation but it was waved off after video review, which confirmed that the puck had never crossed the line. Nevertheless, Taifun still went on to get a win with a 2-goal advantage on the scoreboard. 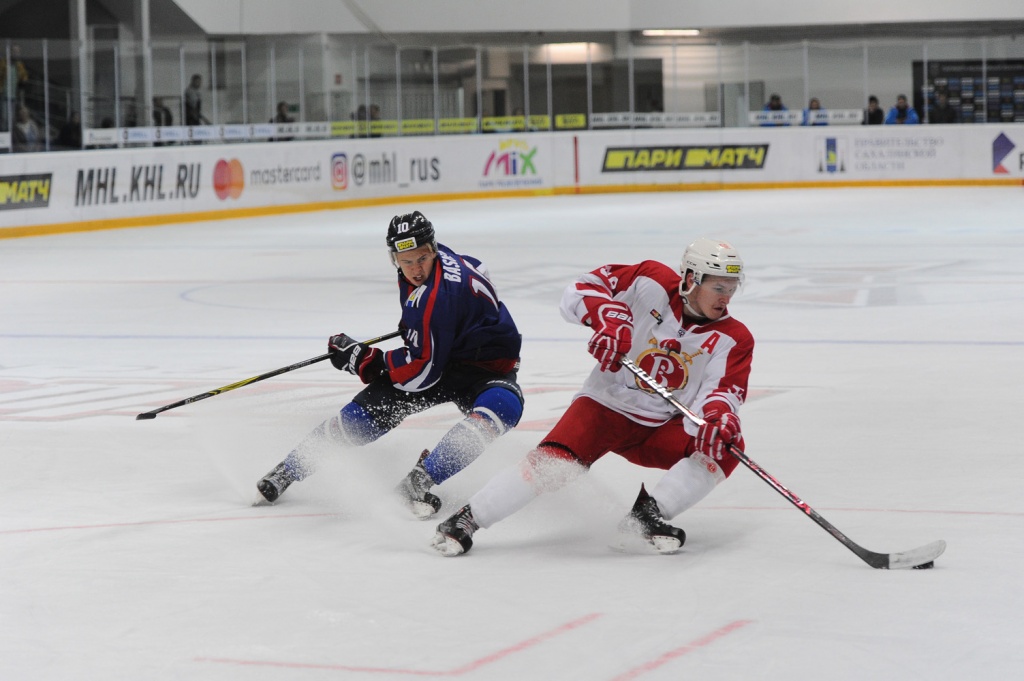 Sakhalinskie Akuly continue to face Moscow Region teams on home ice. This time they went up against Russkie Vityazi. First period of play featured only penalties but the teams traded goals in the second – first Ruslan Akhmetvaliev opened the scoring and then Nikolai Burenov found the back of the net. Ivan Zinchenko and Daniil Glukharyov had a fight after that. A little later the visitors seemed to have put the puck in the net from the pile-up but video review determined that the puck didn’t go in.

Last seconds of the game were key. The game was headed to overtime when Yegor Ageyev stole the puck, skated in on a breakaway and beat Daniil Chechelev. The visitors couldn’t find the equalizer in the remaining 18 seconds and the ‘Sharks’ won their second consecutive game. 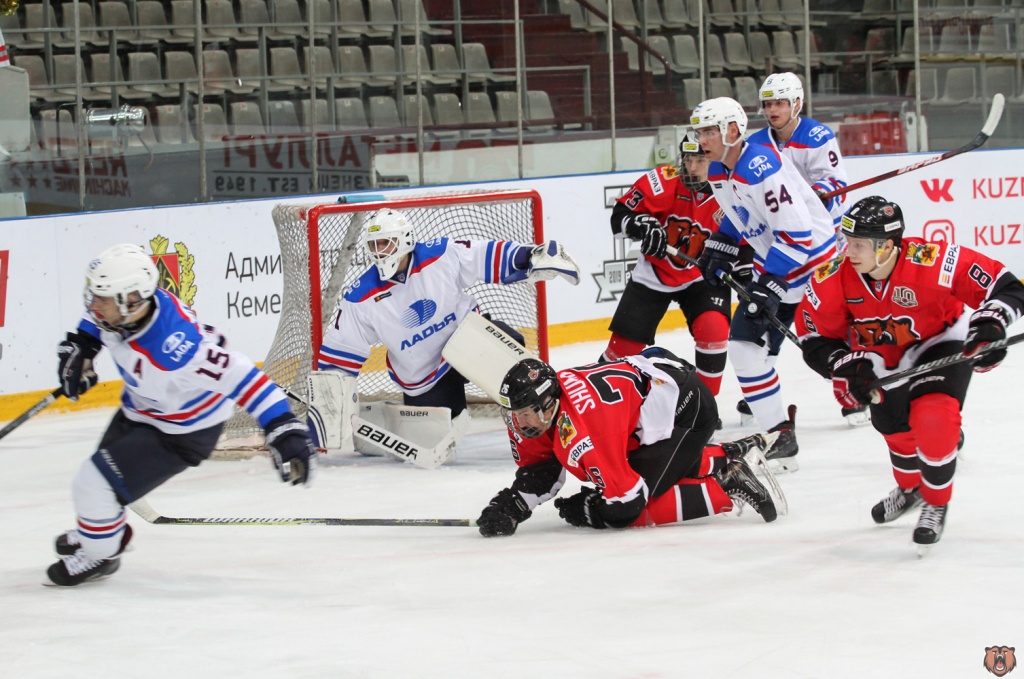 Ladiya Togliatti, who have slowed down after a hot start, visited Novokuznetsk to face local ‘Bears’. 10 minutes in Vadim Zakhmarevich opened scoring hitting top-shelf. Togliatti responded rather quickly as Alexander Ponomaryov converted on an incredible solo dash. 18 minutes in Zakhmarevich gave his team their second lead of the game – this time he sent it in with a screen-shot just inside the post.

Bulat Zagidulin scored Kuznetskie Medvedi’s third goal, forcing Togliatti to swap their netminders – Artyom Zabrodin went in instead of Igor Kulakov. That boosted visitors’ confidence as they got back to within one on Timofey Doba’s marker, heading to the dressing-room trailing 3-2 after 40. Despite the tendency of breaking down towards the end of regulation, Novokuznetsk stayed out of the box and got a well-deserved win. Andrei Sokolov scored the final goal of the game. 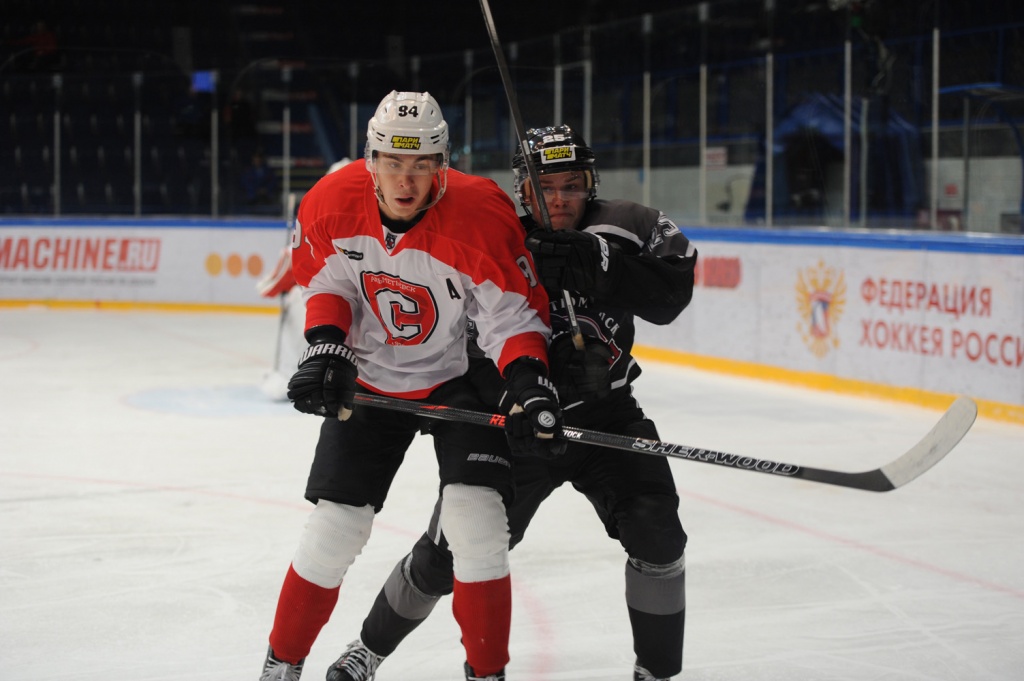 Sputnik Almetyevsk challenged Tyumensky Legion on the road. The latter have been rather inconsistent early in the season. First period was a great example of that as home team went down 2-0 on goals by Daniil Melnikov and Mikhail Fadeyev. After that Almetyevsk converted on Evgeny Volkov’s penalty – Timofey Okruzhkov finished off a beautiful passing play sliding it home from the doorstep.

The ‘Legion’ got a goal back three minutes into the second period as Volkov made up for his earlier penalty. However, just two minutes later Aidar Galimov restored the 3-goal margin with a great shot that went in just inside the crossbar. Home team failed to recover from that. Mikhail Fadeyev further improved the lead with five minutes remaining to play in regulation, while the game ended with two bouts.

Mamonty Yugry lose their 5th in a row 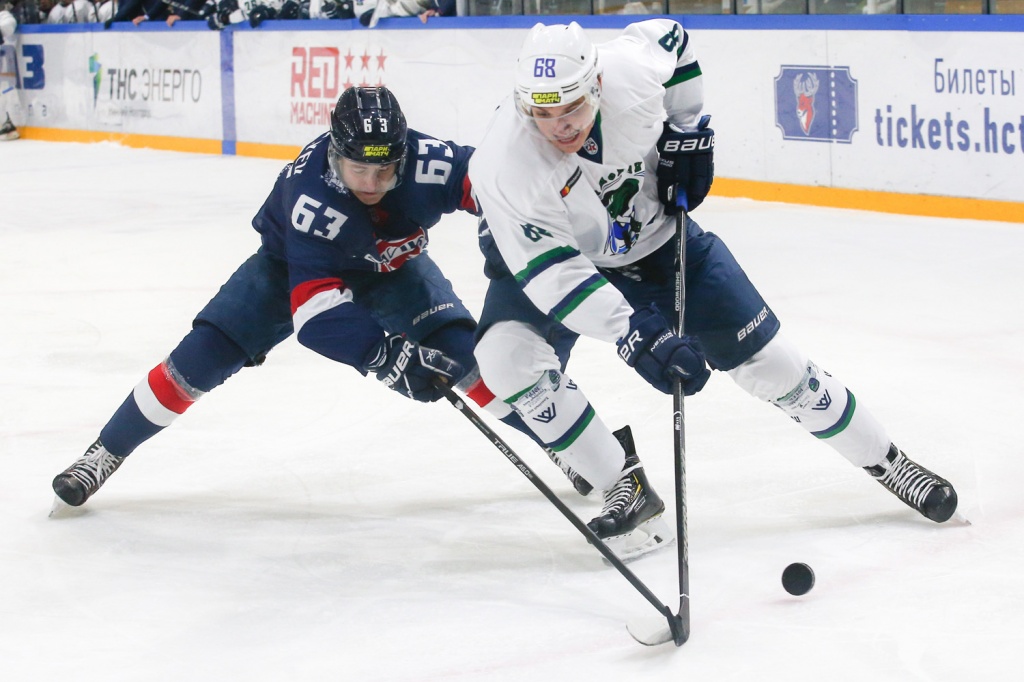 Struggling Chayka and Mamonty Yugry went face-to-face in Nizhny Novgorod. Home team had the momentum on their side in the opening period and got on the board 11 minutes in – Andrei Nikonov scored off a pass by Andrei Zamurayev. Both players picked up their first points of the season on the play. Khanty-Mansiysk definitely had a few words to say to each other in the dressing-room and emerged a different team for the second period. The visitors got back even with Kirill Rudenko’s marker. However, in the very next shift Yegor Alexeyev gave Nizhny Novgorod their second lead of the game.

Late in the third frame Nikita Shavin scored Chayka’s third goal of the game and it proved to be the last. The ‘Mammoths’ pulled their netminder for the extra-attacker but it was too late. With seven seconds till the final buzzer Nizhny Novgorod cleared the puck to safety and handed the visitors their fifth consecutive loss.

SKA-Varyagi edge Almaz in the shootout 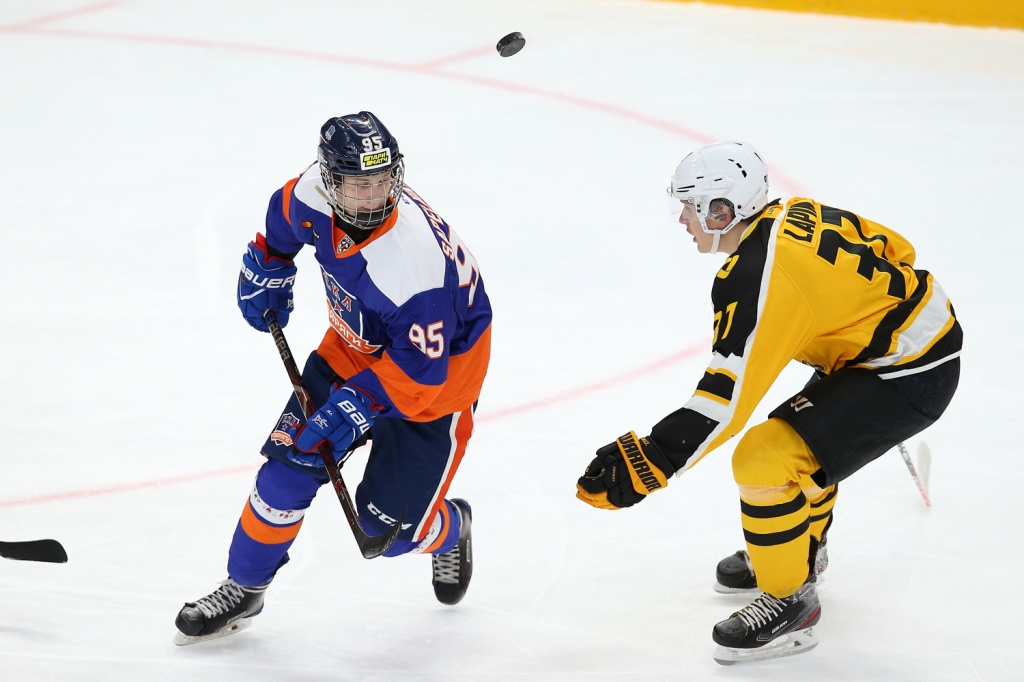 Wednesday night action concluded in St. Petersburg where two relentless Western Conference teams crossed sticks – SKA-Varyagi and Almaz Cherepovets. As evidence to that first period of play featured a lot of physical battles with an equal number of shots, scoring chances and complete lack of goals. The visitors opened scoring in the second period – Nikita Guslistov landed a beautiful one-timer in the back of the net to put Cherepovets in the lead.

The teams opened up in the third stanza and scored a lot of goals much to the fans’ joy. Nikita Lukhovsky improved the lead for Almaz but SKA-Varyagi got back even as Denis Mikhnin got two tallies. With three minutes on the clock Gleb Petrov gave Cherepovets another lead but Ilya Kudryashov came to St. Petersburg rescue. Overtime solved nothing and SKA-Varyagi came out on top in the shootout – Nikita Shuidin scored the winner.