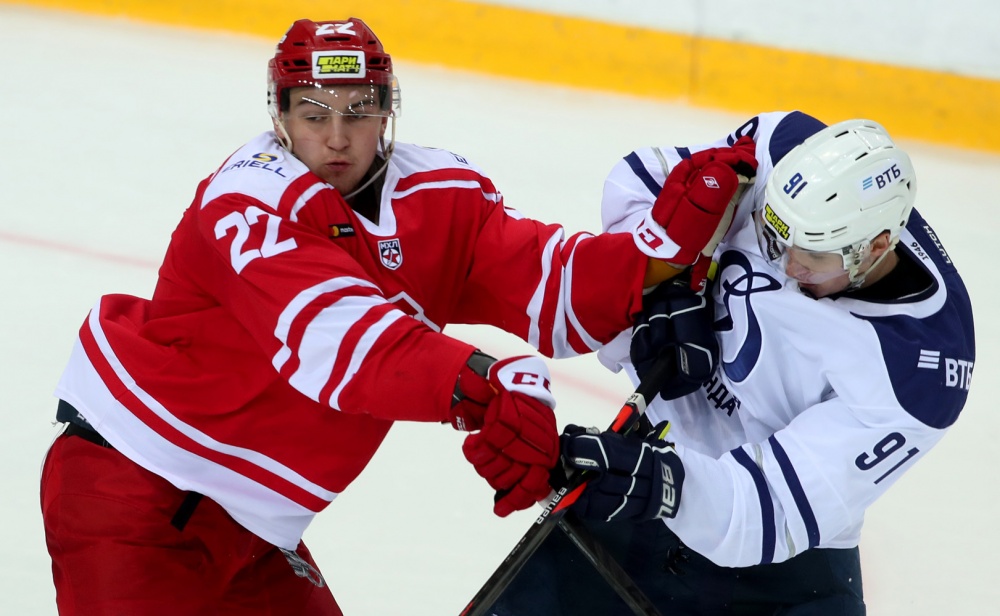 THREE SHUTOUTS AND ATLANT’S UNREAL THIRD PERIOD. SEPTEMBER 10th ROUND-UP
Share
Seven regular season games took place in Parismatch Junior Hockey League. All of them were Western Conference matchups. We take a look at all of them in this daily JHL review.

Dynamo Moscow once again are blanked by Spartak 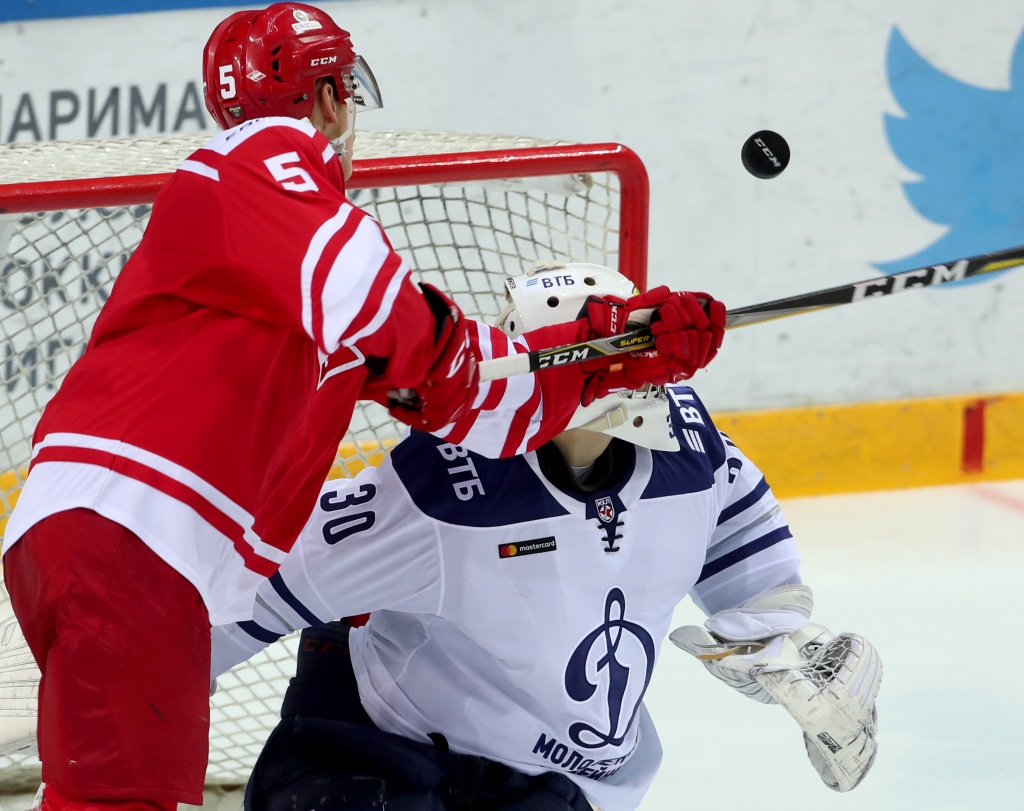 Second game of a rivalry back-to-back series between JHC Spartak and JHC Dynamo took place in Moscow. The blue-and-white, who lost 2-0 the day before in their first game of the year, obviously didn’t feel like going down that road again and had the momentum on their side in the opening period of play. Maxim Motorygin guarded the goal for Dynamo, while Dmitry Kulikov got the nod once again on Spartak.

The red-and-white killed off a penalty midway through the second period. Right after that Oleg Korchagin received the puck in the slot, turned and left no chance for Motorygin with a deadly wrister. Late in the frame Andrei Legalin buried the rebound on Anton Mishakov’s shot. Motorygin stopped the initial shot but was rendered helpless on the follow-up chance. The score remained unchanged till final buzzer and Dynamo failed to get their first goal of the year due to lack of discipline. Kulikov went on to celebrate his second consecutive shutout as he made 30 saves. 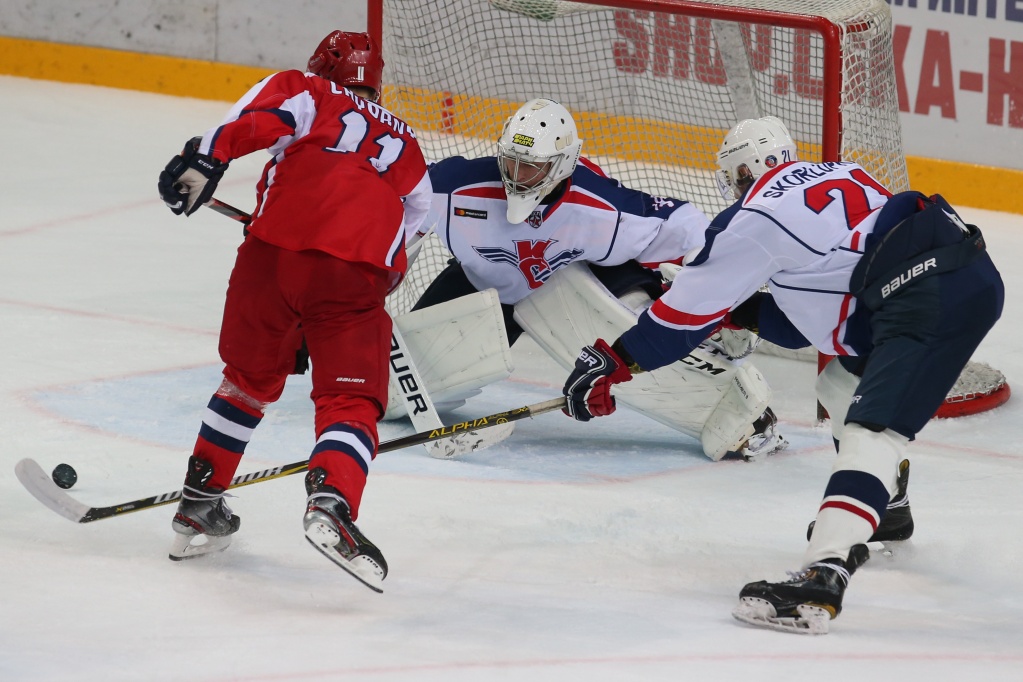 Krasnaya Armiya played hosts to Krylia Sovetov in another Moscow rivalry. First game of the back-to-back series took place on September 8th, so the teams had two days to recover and get ready for Game 2. ‘Army men’ won the previous bout in overtime. Home team had the momentum in the opening period of play, while goaltender Vsevolod Skotnikov had to make just four saves, watching his counterpart Danil Kadochnikov sweat buckets.

Second period of action followed a similar scenario but this time around Krasnaya Armiya converted on their scoring chances. Early into the frame Pavel Koreshkov found the back of the net. The red-and-blue capitalized on every powerplay opportunity that was thrown their way as well – Nikita Dolgopyatov and Artyom Grushnikov hit their targets. They further increased their lead in the third stanza – Yegor Kuzminov scored a pair and with eight seconds remaining on the clock Dmitry Zugan set the final score. Krasnaya Armiya win 6-0 as Skotnikov posts 16 saves for a shutout. 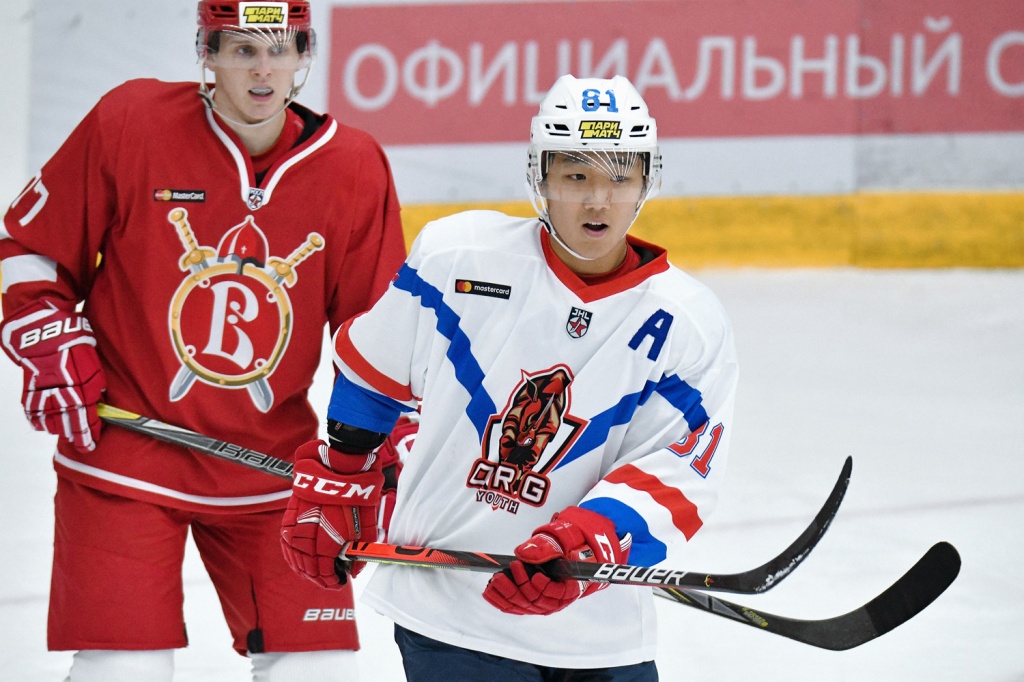 Russkie Vityazi faced ORG Junior of China in Chekhov, Moscow Region for the second consecutive time. The visitors were still looking for their first win and point coming into this one but it was obvious in the opening frame that they weren’t going to get either. Leon Zambakhidze converted on Prokhor Korbit’s minor penalty. 15 minutes in Ivan Zinchenko doubled the lead for Russkie Vityazi. Chinese team took just three shots on Vladislav Zaitsev in the stanza.

Nothing changed in the second period. Filat Zotov scored his debut goal in Parismatch Junior Hockey League and late in the frame Zambakhidze netted his second of the game – the puck went in off Patryk Wysocki’s stick. Zakhar Bardakov and Konstantin Blinkov dropped the gloves shortly after that. That made Russkie Vityazi even angrier and they scored just as many goals in the third frame as they did in the previous two combined. Zinchenko got his second tally of the game, while Kirill Kondyrev and Semyon Demidov chipped in one each. Dmitry Zaitsev scored on a penalty shot to put a cherry on top. Daniil Chechelev earns his second consecutive shutout as Russkie Vityazi win 8-0 on home ice.

JHC Dynamo St. Petersburg get a solid win over Taifun 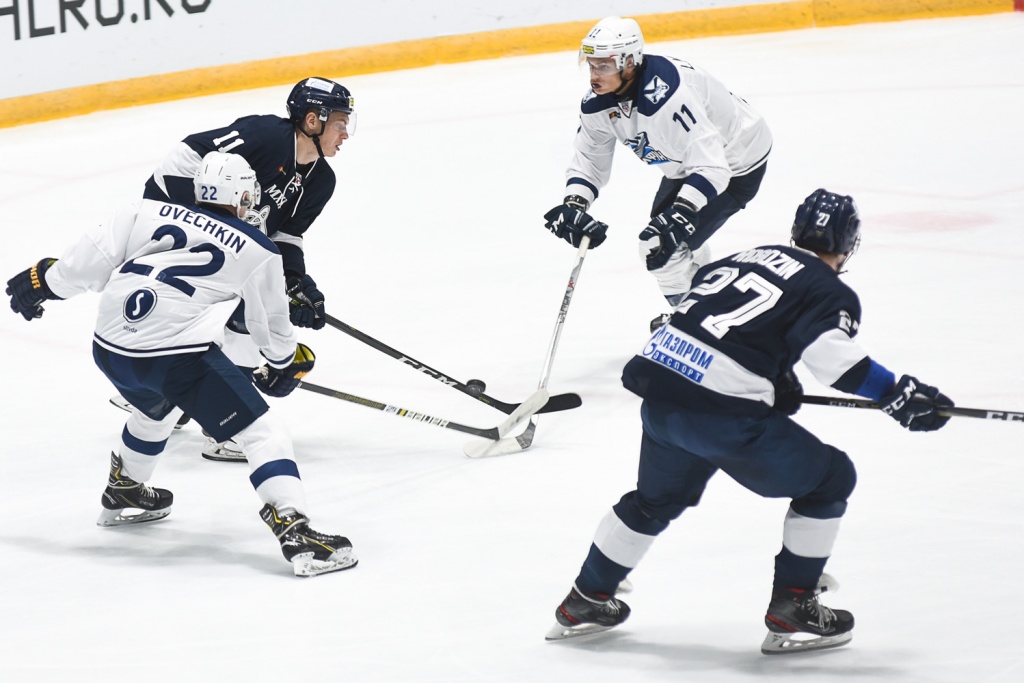 JHC Dynamo St. Petersburg played hosts to Taifun Primorie Region and opened up the scoring 19 seconds in. The visitors turned the puck over on a breakout, Sergei Bolshakov and Yegor Anisimov put together a give-and-go and the latter one-timed it home. All in all, home team had the momentum on their side the entire time, while Taifun took just two shots on goal in the period. Dynamo scored their second goal as they converted on a 2-man advantage – Pyotr Yakovlev found his target.

Ivan Bunov got a goal back before the second intermission as he beat Kirill Yershov 5-hole from the blue line. However, that was the only goal Taifun could score in the game, even though they also had a 2-man advantage. Pyotr Yakovlev scored on the empty net late in regulation and when Ivan Gamov took his place between the pipes again, Yegor Anisimov set the final score. Dynamo win 4-1 on home ice. 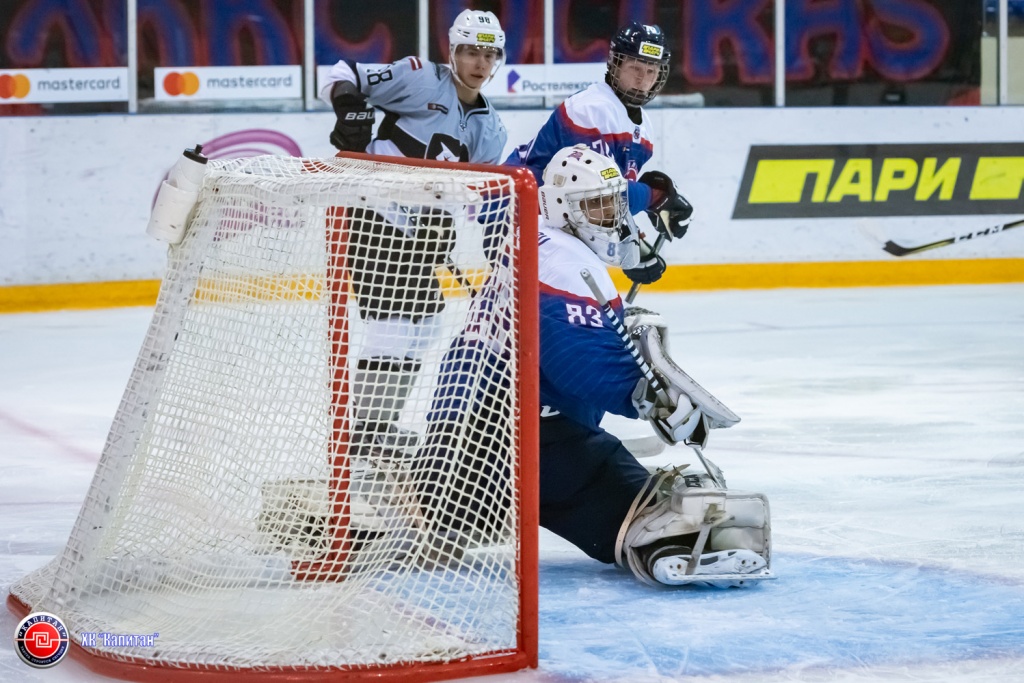 A quick goal also took place in Stupino, Moscow Region as HC Kapitan faced HK Riga. Ivan Kazakov got on the board just four minutes in. That was followed by a brawl, which sent as many as six players to the penalty box. Riga got back even late in the period as their last season’s top-scorer Janis Svanenbergs found the back of the net. The visitors got in the lead before the intermission as Patriks Zabusovs made it a 2-1 hockey game.

Stupino leveled it again late in the second frame – Ivan Kazakov scored his second of the game and the teams headed to the dressing-rooms tied 2-2 after 40 minutes of play. Third frame featured just one goal – Antons Sinegubovs scored the game-winning goal for Riga. Kapitan pulled their netminder for the extra-attacker in the final minute of regulation but they ran out of time looking for the equalizer. Riga enjoy a hard-fought 3-2 win. 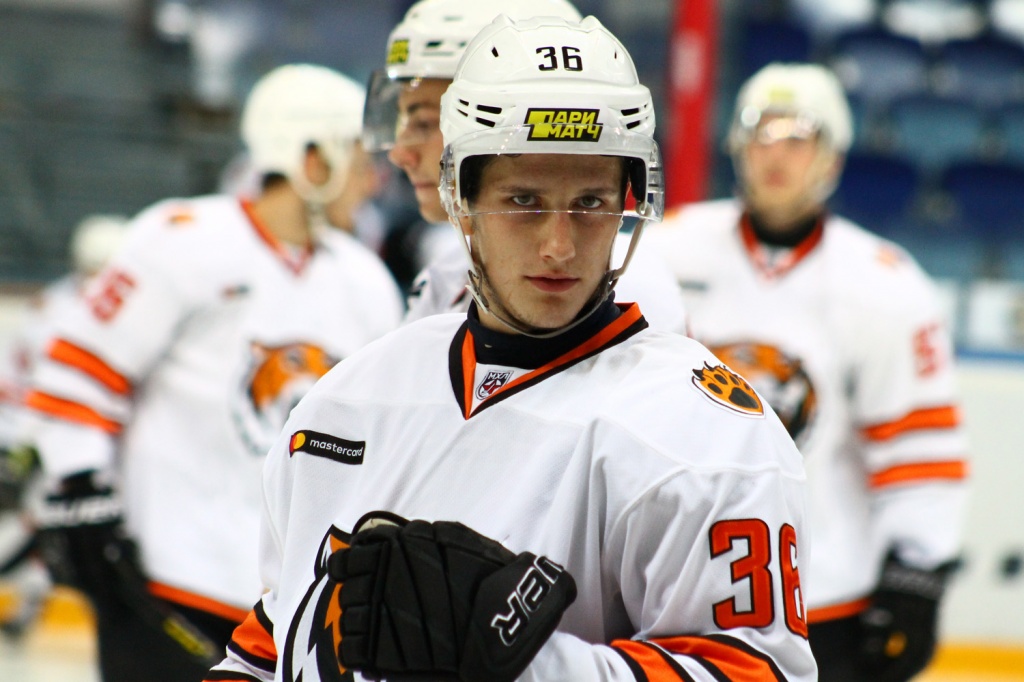 Atlant faced Amurskie Tigry Khabarovsk in Mytischi, Moscow Region and first period of play turned out to be rather high-scoring. The visitors had a lot to do with it as they scored three goals. Evgeny Babushkin got a pair of tallies and 17 minutes in Nikita Meretsky sent another one past Maxim Kloberdants. Semyon Karasyov had scored a shorthanded goal a few shifts earlier.

Home team had the momentum on their side in the second frame but they couldn’t capitalize on their scoring chances. However, Moscow Region team exploded in the third period. Matvey Kokovin scored twice, Nikita Gergankin converted on a powerplay and Artur Demidov chipped it another one at even-strength. Khabarovsk fell apart and couldn’t recover. Atlant take it 5-3 on home ice. 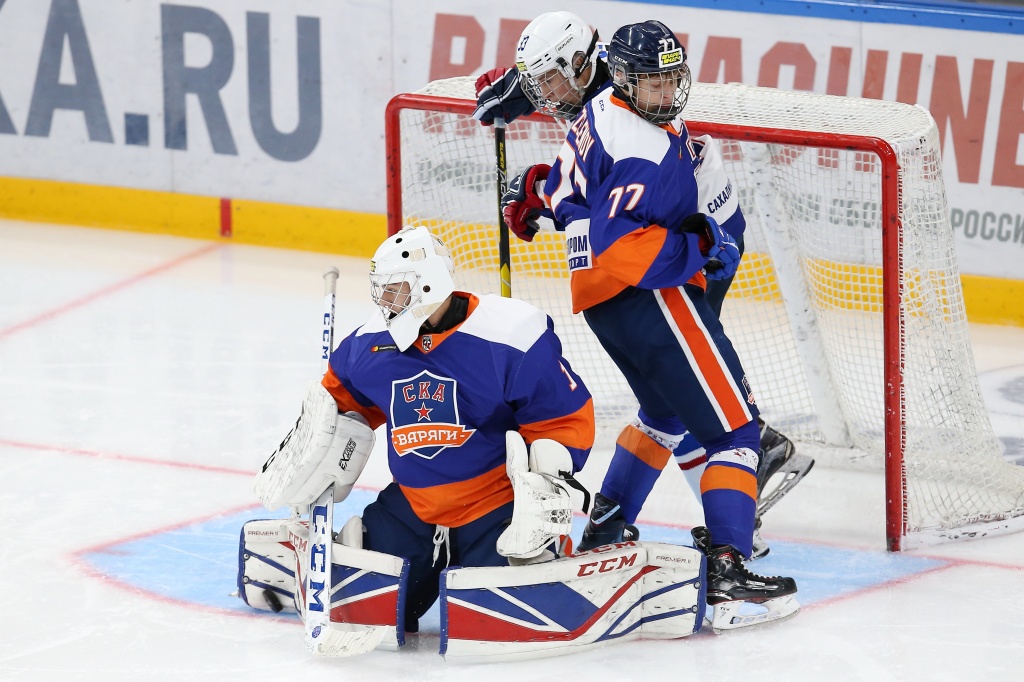 In the final game of the day Sakhalinskie Akuly faced SKA-Varyagi St. Petersburg for the second consecutive time. First period of play ended with the same score as the day before – home team had 1-0 lead as Denis Mikhnin found the back of the net. 16 minutes into the game SKA-Varyagi were awarded a penalty shot but Nikita Shuidin failed to convert on it. Daniil Kuptsov got a minor penalty for holding seven minutes into the next frame and the visitors had to pay for it – Mikhnov scored his second of the game on a powerplay.

The ‘Sharks’ continued to pile up penalties but once they found themselves on a rare man-advantage Kuptsov scored his second of the game as well. Yuzhno-Sakhalinsk had a chance to tie it up but they couldn’t get anything on a 2-man advantage. SKA-Varyagi pulled through and got their revenge for losing the day before.