Loko
News
MASTERPIECES BY ABROSIMOV AND DEMIDOV, DYNAMO DOMINATION IN THE WEST. JHL WEEK ROUND-UP
ALEXANDER GUSKOV: “THERE’S PLENTY OF TALENT IN JHL. ALL THEY NEED IS A CHANCE”
“I PLAY AT THE RINK I USED TO COME TO AS A KID”. QUOTES BY TOP PLAYERS OF THE WEEK
DYNAMO DOMINATE SEVEN DAYS, TUMANOV STEPS INTO THE SPOTLIGHT. JHL WEEK ROUND-UP
BELYE MEDVEDI GET ON A ROLL, MAMONTY YUGRY WIN EIGHT STRAIGHT. OCTOBER 10TH ROUND-UP
NOT A WORD ABOUT HOCKEY. ILYA PARANIN
CHAYKA AND RIGA BLANK OPPOSITION, KRASNAYA ARMIYA AND DYNAMO WIN IN ST. PETERSBURG. OCTOBER 9TH ROUND-UP
DYNAMO MOSCOW SCORE 9 GOALS, SOAR TO ON TOP OF THE WEST. OCTOBER 7TH ROUND-UP 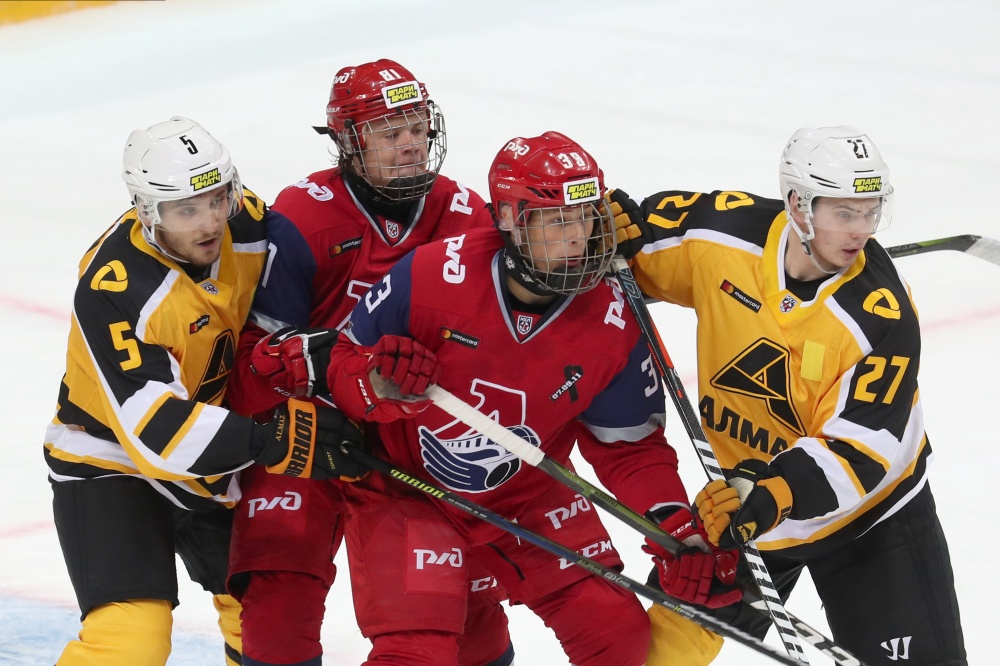 The teams got off to a hot start - Vladislav Lukashevich and Nikita Krutov took long shots early on. By midway through the opening period of play, Loko and Almaz also got several penalties and Cherepovets looked much better on a powerplay than their counterpart. Artur Yegorov whiffed on a shot from prime scoring area, while German Grachyov hit the post behind Vladislav Okoryak but the puck stayed in play. Late in the period Almaz got scored on. 17-year-old Pavel Tyutnev scored the season’s first goal as he circled the net and stuffed it past Konstantin Shostak.

Loko improved their lead to 2-0 five minutes into the second period. Cherepovets got caught on a line change and allowed a 3-on-1 rush. That led to Yaroslavl new captain Maxim Denezhkin one-timing it home. Five minutes later Timur Akhunov took a shot from point-blank range but this time around Shostak was on top. After Daniil Gutik’s minor Krutov failed to capitalize on another scoring chance. This time he tried to tap it home backdoor but missed the net. Almaz evened out on the shot-clock in the second frame but couldn’t convert it into goals.

Early in the second period Roman Bychkov could have further increased the lead for the ‘railway men’ but he failed to reach the puck. Soon after that he got a penalty and home team had to pay for that. Vladislav Gertsik went for a long shot and it was right on the money – Okoryak was screened and didn’t see the puck go past him. Loko nipped Cherepovets’ hope in the very next shift. Odd-man rush and Mikhail Smirnov sent it past Shostak.

The visitors couldn’t convert on Anton Lukichyov’s minor either. Moreover, Yaroslavl scored shorthanded. A stretch pass from behind Shostak’s goal was intercepted by Pavel Tyutnev who scored his second of the game and set the final score. Reigning champions begin new season with a 4-1 win on home ice.

“We won on the scoreboard, yes, but the at times the were situations we’d like to avoid,” said Loko head-coach Igor Melyakov. “I don’t think self-confidence has anything to do with it because we always rotate our players. We have a core of about ten players. Others have to prove that they can play at the level and compete. There’s a lot of competition on our team. It’s difficult to say what would have happened, had we not scored the third goal right after we had been scored on. Was I surprised by Tyutnev’s play? He played for us in Nizhny Novgorod when he joined us from Team Russia. We’re well aware of his capabilities. There was no surprise. The kid does his best and works hard.”

“It feels great to make the team and score a goal,” said Loko forward Pavel Tyutnev. “I don’t think it makes much of a difference if it were my first JHL game of fifth. Every game is important because I hadn’t score a single point up until now. Did Kharlamov Cup get heavier? I have to win it first and then think about its weight. I didn’t get to hoist the old one so I can’t compare.”

“It was the first game. Most of the guys who were on the ice today had played in NJHL last season. They faced such a great opponent and that was difficult without a doubt,” said Almaz head-coach Evgeny Stavrovsky. “It was very emotional and we made a few silly mistakes that affected the result. Was the third goal key? Of course. You can’t allow goals just after you scored. It’s frustrating that our most experienced defenseman made a mistake on the play. I can’t explain it. Before that shift everyone was given clear orders. He did everything backwards. Despite the loss, I see a lot of positives. Those boys, who made their debut tonight, looked good. I had expected worse. They created scoring chances. The thing, we couldn’t score because we lacked skill.”