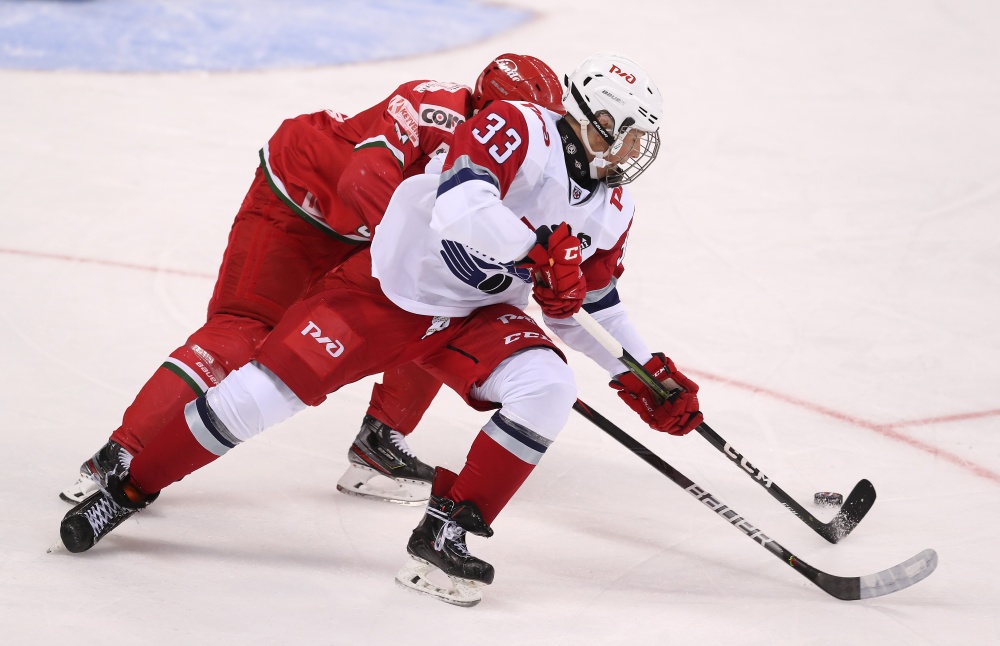 2019 Sirius Junior Club World Cup Day 5 action concluded with a game between defending champions of the tournament Loko Yaroslavl and MODO from Sweden.

The game had no tournament meaning. Loko had guaranteed themselves a semifinal berth after winning two games, while MODO lost their last hope for the medal round since Team AJHL enjoyed a 7-0 win over Davos. However, Mikael Sundell’s team still had their pride to play for, while nothing motivates more than facing reigning champions and one of the top teams of the tournament.
Youngster Yegor Guskov started in goal for Yaroslavl, while MODO once again went with Lucas Jägbring between the pipes.

The Swedes got off to a good start and took a few shots on Guskov right away. Loko netminder made a few saves and his teammates opened up the scoring six minutes in. Alexander Daryin picked up another assists as he lobbed the puck to the slot and Maxim Denezhkin batted it home from mid-air. Loko could double their lead in the next shift but as Nikolai Kovalenko tried to bury the rebound it was blocked by a MODO defenseman. Örnskoldsvik had to kill off a 5-on-3 penalty late in the period and Grigory Denisenko came close to improving the lead.

Daniil Tesanov got a minor for holding early in the second period. MODO players overplayed the puck in the offensive zone and almost gave up a 2-on-1 rush but Kovalenko’s pass was inaccurate. Sundell’s men couldn’t convert on a powerplay, while Kovalenko and Nikita Anokhovsky capitalized on Elias Stenman’s minor. The goal counted after video review. In the following shift Guskov had to come up big as he stopped Simon Andersson on a breakway.

After Yaroslavl put together a long passing play shorthanded, Mikael Sundell called time-out but it didn’t help his team as the ‘railway men’ went on to score two consecutive goals. First Grigory Denisenko scored his debut goal at the tournament and then Danila Dyadyenkin improved the lead to 4-0.

Early in the third period Anton Malyshev got a minor penalty but Guskov rarely had to step into action, while just as Hugo Styf took his place in the penalty box Vladislav Rybakov finally broke the curse and found the back of the net, beating Jägbring. MODO managed to get a goal back late in regulation. Linus Skager stole the puck from Yelisey Minayev behind Guskov’s net and quickly centered it for Joel Wahlgren, who didn’t miss. However, neither that, nor Denezhkin’s late penalty could make Loko sad. Yaroslavl win 5-1, gain 9 points and finish on top of Group A.

“We didn’t get off to a good start. It took us a while to score. Just look at the chance we wasted when we hit goaltender’s stick from point-blank range,” said Loko forward Vladislav Rybakov. “MODO were aggressive but we pulled ourselves together in the second period and began to dominate. The game didn’t matter to either team from the standings point of view but I don’t think it had any effect on the game. We had to get ready for the semifinal through the game. We had to work on our chemistry. Our line has been put together a long time ago. I have played with Nikita Anokhovsky and Nikolai Kovalenko for a long time. Kovalenko recently returned from Team Russia, so you can say that we missed each other (laughs). I remember last year’s Junior Club World Cup when we won gold. This year we have similar opponents and a great atmosphere. All we have to do is win again (laughs).”

“It was obvious that we are more skilled than MODO. Our priority tonight was not to lose to them mentally,” said Loko assistant coach Yegor Podomatsky. “Yegor Guskov made his debut for Loko tonight. Such games are always tough for goaltenders because the puck is in the opponent’s zone most of the time. And you have to stay alert. We are happy with Guskov. He had a solid game. He allowed a goal but the opponent really wanted to score. We’re definitely going to look into the episode. Junior Team Russia players joined us today – Anton Malyshev, Grigory Denisenko and Daniil Misyul. Our team congratulated them on the win at the Four Nations tournament. Perhaps, due to jetlag they weren’t noticeable at first. However, they led by example starting from the second period.”

“Loko were really good tonight,” said MODO head-coach Mikael Sundell. “We also got off to a decent start but our young players were no match to the opposition. They are still developing but tonight we played carelessly. Hopefully, we can get to the bottom of this. In the afternoon we watched the game between Team AJHL and Davos. Perhaps, many were frustrated with its outcome. We already knew that we didn’t make the semifinal round. But I don’t think it was the main reason of our loss. To be honest with you, I don’t know what we should have done in order to beat Yaroslavl. They are faster, stronger and much better than us. Too bad that we didn’t beat Canadians in our second game. We could and had to do it. Then we would have been in the playoffs. It’s frustrating that we’re not in the semifinal. Only four teams get to play five games at the tournament, while other play just four, disputing the fifth and seventh places. It’s frustrating because we see the tournament as preparation for new season. It would have been great to play more games in Sochi. Hopefully, that will give us more time for practice at home. We’re going to have two more weeks till the season starts. Americans got an extra game before the tournament as they faced Krylia Sovetov [Moscow]. It’s great. We played two games at home prior to the tournament. We didn’t play enough games in August to get ready better for the tournament. We also didn’t have enough time at the tournament to find our game. When MODO came to the Junior Club World Cup in 2017, we lost every game in round robin but due to the format of the tournament we continued to play in the playoffs, beating Avto [Yekaterinburg] and Snezhnye Barsy [Astana] and made it to the final. All because we had enough time to get ready and improve at the tournament. I think we should think about having more games at the World Cup next year.”