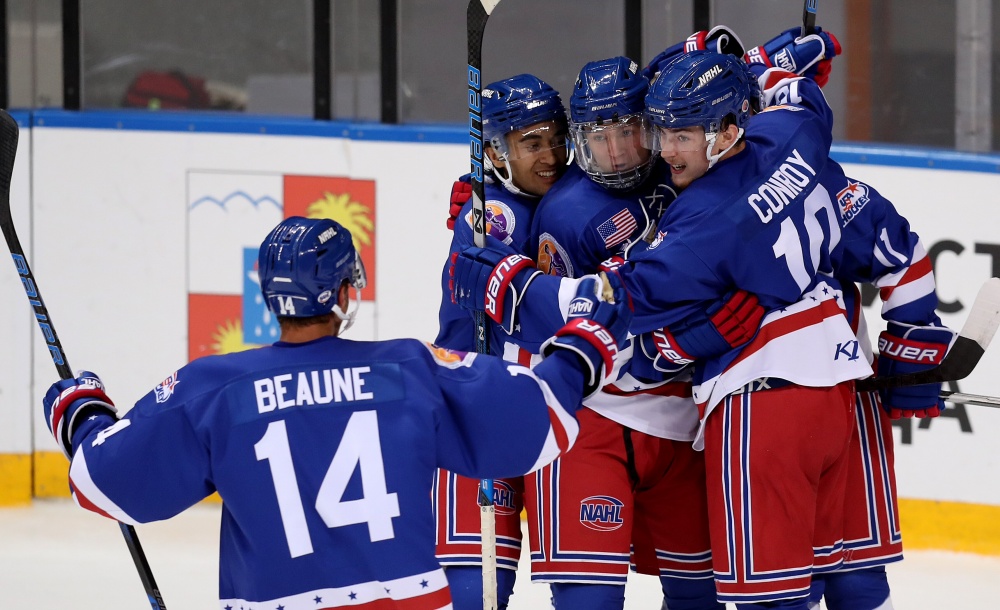 2019 Sirius Junior Club World Cup Day 4 action ended with a Pool B game between Team NAHL and Red Bull. American team had to win in order to keep their semifinal hopes alive.

Austrian team delegated Christopher Kolarz between the pipes, while USA gave the nod to Jack Williams, who replaced Mattias Sholl.

As expected, the teams opted for past-paced hockey right from the beginning. Red Bull is one of the speediest teams of the tournament, while Americans are not used to lose at fast skating to anybody. The teams traded penalties (namely, Red Bull’s top-scorer Aljaz Predan got one of the minors) but failed to convert on them. Neither NAHL, nor Salzburg could score at even strength but after a couple of off-setting minors USA did open up the scoring. Tyler Love put the puck on net from the point, while Nick Trela screened the goaltender and put the puck upstairs to give his team a 1-0 lead after 20 minutes of play.

Two minutes into the second period Daniel Carlqvist got a minor penalty for holding and it led to Team NAHL doubling their lead. A long passing play on a powerplay led to chaos in the slot. The puck squirted straight to Killian Kiecker-Olson, who made no mistake. After that USA got two consecutive penalties but almost scored another one – Max Borst skated in on a breakaway but failed to beat Kolarz. Having killed off the penalty, Americans did improve their lead to 3-0 – Billy Feczko found his target.

Midway through the period Europeans finally solved Williams – Pontus Englund sent it in off Martin Hlozek’s assist. The play shifted to NAHL zone after that and Williams had to sweat buckets to keep Red Bull at bay. Nothing memorable happened later in the period. North Americans protected their lead and gave no chances to Salzburg.

Third period of play also began with offensive rushes by Red Bull, but they weren’t very dangerous. A few shots went wide of the net and Williams took care of the rest. Halfway through the stanza Red Bull got back to within one. Luka Nyman put the puck on net in desperation but Robert Arrak found himself in the right place at the right time and sent the puck into the net from the slot. Despite all effort, Red Bull couldn’t find the equalizer. Team NAHL win 3-2, augmenting the intrigue in Pool B.

“After we failed to succeed in the first game of the tournament, we had a window of opportunity to fix the situation,” said Team NAHL assistant coach Rocky Russo. “We’ve done a really good job, reacted to the situation and beat a good team. We scored a couple of quick goals and survived a 4-on-5 and then a 3-on-5 in the second period. We continue to compete for a berth in the semifinals. This is our priority right now. We know that we have a really good opponent coming up. We saw a few minutes of Trinec’s practice. They have a well-known coach Marek Malik. We watched their game against Red Bull and the score doesn’t reflect how close the teams were. They’re going to be a serious challenge for us. We’re not going to think about making the semifinal. We focus on tomorrow. We need to practice, watch a video, regroup and be ready to play on Wednesday. Without a doubt the game is going to have a championship atmosphere. As they say, loser goes home. That’s the situation we’re currently in. Any loss of points can cost us a playoff spit so the boys have to forget about nervousness. It would be great to make the playoffs. Then we’re going to have an opportunity to face another North American team – Team Alberta. Obviously, it would be a fun game! Looking ahead, I think one way or another Kärpät will finish the job and finish on top of the group. So it looks that if we’re going to make the playoffs, we’re going to face Loko. Which Group A team is the strongest? Do you really have to ask? To be honest, Loko looks like a KHL team. It’s a team for big games. I don’t want to insult Alberta but they would give you the same answer – Loko is the strongest team of the tournament. I’ve had several Russian players on my teams. Moreover, I have a Russian on my team – Gagik Malakyan. He left Moscow last year where he played in a student league but he’s already good enough to play in the NAHL. So I know a few Russians personally.”

“It was one of the most difficult games. We played our best game of the tournament but lost,” said Red Bull forward Filip Varejcka. “We need to beat Kärpät in the next game to get to the semifinal round. It’s a skilled team and we need to play as a team to beat them. We have to put a team effort. Obviously, it’s a little worrisome because this is the time for deciding games. We know that we’re going to do everything to win. We saw Kärpät beat Team NAHL. They played really well and were fun to watch. Why didn’t we pull our goalie in the last minute? We had a few chances. We didn’t take a lot of shots and couldn’t set in the zone so there was no reason for extra risk.”