Krylya Sovetov
News
ANDREI FEDOTOV: “HOPEFULLY, I CAN WIN ANOTHER JHL MEDAL AS A COACH”
MASTERPIECES BY ABROSIMOV AND DEMIDOV, DYNAMO DOMINATION IN THE WEST. JHL WEEK ROUND-UP
ALEXANDER GUSKOV: “THERE’S PLENTY OF TALENT IN JHL. ALL THEY NEED IS A CHANCE”
“I PLAY AT THE RINK I USED TO COME TO AS A KID”. QUOTES BY TOP PLAYERS OF THE WEEK
DYNAMO DOMINATE SEVEN DAYS, TUMANOV STEPS INTO THE SPOTLIGHT. JHL WEEK ROUND-UP
BELYE MEDVEDI GET ON A ROLL, MAMONTY YUGRY WIN EIGHT STRAIGHT. OCTOBER 10TH ROUND-UP
NOT A WORD ABOUT HOCKEY. ILYA PARANIN
CHAYKA AND RIGA BLANK OPPOSITION, KRASNAYA ARMIYA AND DYNAMO WIN IN ST. PETERSBURG. OCTOBER 9TH ROUND-UP 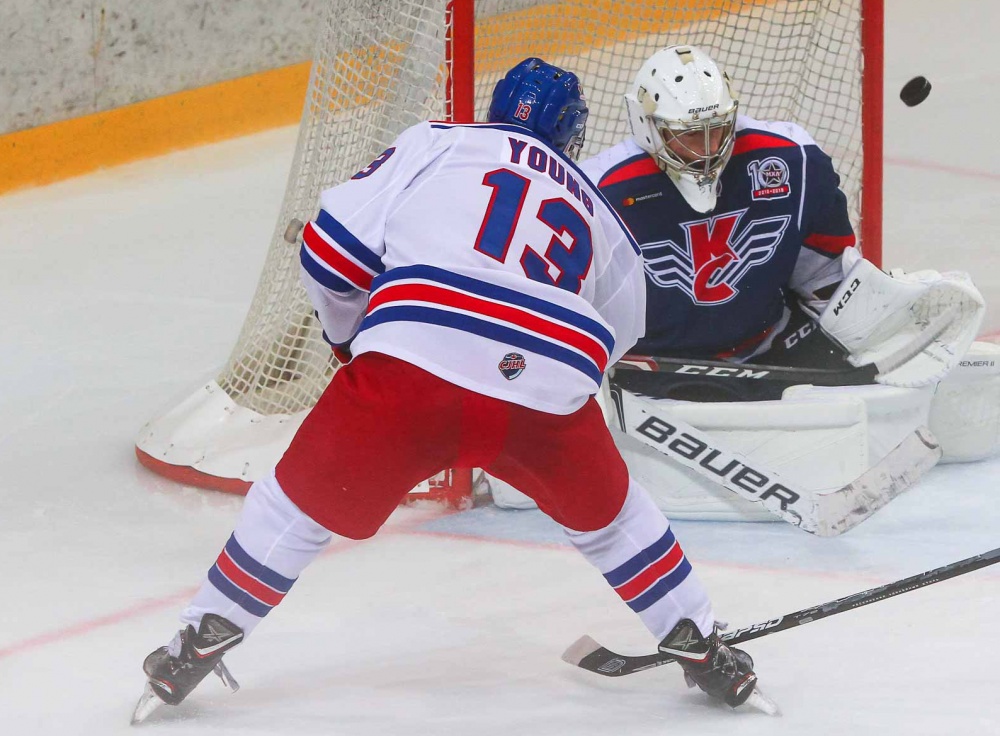 Krylia Sovetov Moscow played their second international game in as many days. This time ‘Soviet Wings’ faced yet another Junior Club World Cup participant as Team AJHL came to Setun.

Daniil Kadochnikov took the place between the pipes for Moscow, while Team AJHL delegated Matthew Davis. As usually is the case, Canadians were aggressive in the opening minutes of play but Krylia Sovetov survived it and laid a few good hits along the boards. The teams played some 4-on-4 hockey and the pace of the game was visible faster than in the game between Moscow and Team NAHL the day before. AJHL put together a nice passing play 11 minutes in and it led to Michael Benning opening up the scoring as he tapped it in on the rebound. Nikita Firsov got a minor for roughing late in the period and Kadochnikov had to make a few huge saves to keep it a 1-goal game. However, there was nothing he could do when ‘Soviet Wings’ went back to playing full-strength as Alex Young doubled the lead with a shot from the slot.

Second period began with Team AJHL rattling one of the bar behind Kadochnikov. Krylia Sovetov even up the game but their offensive rushes lacked danger – Canadian defensemen and their netminder easy diffused every situation thrown their way. Finally, Russian team did find the back of the net – Sergei Mozhayev sent Pavel Zubchinsky in on a breakaway and he roofed it past Davis. Setun turned the momentum around and pinned Canadians to their end. Zubchinsky had another breakaway chance but this time Davis came out on top. Vladimir Yekimov shot his team in the foot as he got a minor penalty and Team AJHL went on to convert on it – Young got his second of the game on the ensuing powerplay. After that Griffin Bowerman replaced Davis in goal.

Zane Kindrachuk got a minor early in the third stanza. Home team failed to capitalize on the man-advantage, which was followed by Alexander Mirgorod getting a penalty as well. Krylia Sovetov managed to fend off the opposition but Team AJHL still scored another one after Mirgorod had stepped back onto the ice. And once again it was the Young-Kindrachuk duo that got the job done. It seems that the two will provide Canadians with fire-power at the upcoming Junior Club World Cup. ‘Soviet Wings’ responded in no time – Alexei Shumilov shoved the puck into the net from the slot. Moscow once again ran into a penalty problem and Jordan Biro converted on a double-minor. Krylia Sovetov lose to another North American squad as they fall to Team AJHL 5-2 on home ice.

“We are very happy we could play an exhibition game before the tournament,” said Team AJHL head-coach Boris Rybalka. “We saw what our players are capable of. The boys looked good all in all. We went soft a bit in the second period and there are several reasons for that – long flight and fatigue. But, in general, I’m satisfied and not complaining. This was our first look at the team in action and we’re optimistic. We really liked Krylia Sovetov team. They played great hockey. We knew that it was a fast team, we knew that #99 – Maxim Vyatkin – was really good. It was experience for us before going to Sochi. It was very interesting to put together a team from scratch. We knew players we wanted to see on our team but we had just eight days to put together the team. I think, in Sochi the team is going to look as strong as possible.”