NOT A WORD ABOUT HOCKEY. YEGOR SINEGUBKIN 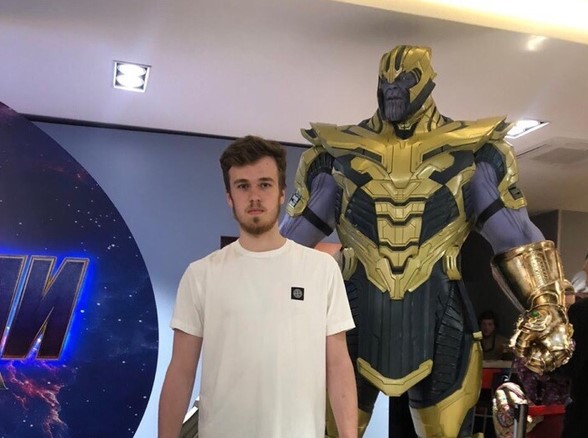 In today’s edition of our continuing Not A Word About Hockey series we’re going to talk to JHC Spartak Moscow goaltender Yegor Sinegubkin. The red-and-white netminder opens up about his spare time, favorite movies, character traits, his parents and much more.

- My friends and family decide on my diet. I try to eat healthy. I can’t say I have a favorite meal.
- My family has a lot of pets. We have two dogs, a cat and a chinchilla. I like to spend my spare time talking them out for a walk and playing with them.
- If I have a day-off, I usually just stroll down the city, bike around or fiddle with LEGO.
- I have visited and seen many countries. But I have never been to Singapore. I dream of going there.
- My friends and I usually go to the movies or for a walk. Sometimes we go to cottages to barbecue and chill by the pool.
- I’m a Marvel and Robert Downey Jr. fan. I like his charisma and acting.
- I listen to all kinds of music. I’m not hung on just one genre. It really depends on my mood.

- I’m a pretty open and direct person. As for my shortcomings, I’ve got a quick temper. I can say something in the heat of the moment and then come to regret it. It’s difficult for me to talk about my own upsides, but those who are close to me say that I’m always open for them and can help them when they need it.
- I’m always eager to play! Although, when the fatigue level rises, I motivate myself with the fact that you can only achieve great result in something you love through hard work.
- A real man must be responsible. He must be reliable.
- My parents have done and continue to do a lot for me. The main character trait I have inherited from them was persistence and will to do whatever it takes.
- When I meet new people, first thing I look it is how they talk and how interested are they in talking to me.
- I’m superstitious but I gradually try to stop being like that. After all, it really gets in the way. You start overthinking everything instead of focusing on the game.
- I can’t call myself a gambler.

- I don’t have a role model when it comes to men’s attire but I pay attention to how people around me dress. Sometimes I follow their lead.
- I don’t pay attention to clothing brands but it feels nicer to wear quality things. In everyday life I prefer athletic wear of white and grey colors.
- I like men’s cologne Abercrombie & Fitch.
- I grow a beard because without it I really look like a child.

- My girlfriend is into hockey. She always supports me and does her best to be by my side when times get rough. She wants me to win just as I do myself. She studies in a university. She’s majoring in psychology.
- Serious relationship is a necessity in athletic career. It’s very difficult to go on without support in our sport.
- In my opinion, children have to figure out what they want to do in life themselves! Parents’ goal is to give them options.

- If it weren’t for hockey, I would end up somewhere in finances. It’s something that I’m interested in my spare time.
- After high school, I got accepted to Moscow State University of Foreign Affairs. I studied there for a semester and then took my academic leave because I realized that I couldn’t play hockey and study at that university at the same time.

- Once, when I was 9 or 10 years old, I was skating from the crease to the corner and back before the game. When I was in the corner, the referee put the puck in play and the other team scored on the empty net. I was very frustrated at the time but now I look back at the episode with a smile.