Omskie Yastreby
News
EASTERN FAVORITES ENJOY WINS, MAMONTY YUGRY AND KRASNAYA ARMIYA CLINCH PLAYOFFS. FEBRUARY 26TH ROUND-UP
SAKHALINSKIE AKULY DEFENSEMAN CAME TO HOCKEY FROM WRESTLING. DOES THE EXPERIENCE HELP HIM ON ICE?
MAMONTY YUGRY AND STALNYE LISY WIN AT HOME, ALMAZ BEAT RIGA AGAIN. FEBRUARY 25TH ROUND-UP
“I STILL CAN’T QUITE GET MY HEAD AROUND THE FACT I PLAYED IN A KHL GAME”. 13 KRASNAYA ARMIYA PLAYERS LACED THEM UP FOR CSKA
FROM FULL-FACE MASK TO VISOR IN ONE DAY. NIKITA CHIBRIKOV COMMENTS ON OVECHKIN’S RECORD, EUROHOCKEYTOUR AND KHL
“MY TEAMMATES OFFERED TO RENAME THE MOVE AFTER ME”. HK RIGA PLAYER SCORES A BEAUTY
“WE WERE KIDS WHEN WE FIRST PLAYED TOGETHER”. JUNIOR HOCKEY LEAGUE TOP-SCORER SHARES HIS LINE’S SECRETS
“I DREAM TO RETIRE ON A HIGH NOTE – WITH ANOTHER KHARLAMOV CUP”. QUOTES FROM LAST WEEK’S TOP PLAYERS
Facts and Figures
SEASON ROUND-UP. OMSKIE YASTREBY
Share

Junior Hockey League media relations department continues the series of jubilee season reviews for every team. Omskie Yastreby finally qualified for the playoffs after two years of absence. The ‘Hawks’ made it to the quarterfinals where they lost to Mamonty Yugry in a close series.

Omskie Yastreby
5th place in the Eastern Conference, 72 points in 60 games. 177 goals for, 151 goals against

2-time Kharlamov Cup champions couldn’t make the playoffs for two consecutive seasons. Even such junior hockey stars as Artym Manukyan and Anton Kovalyov couldn’t change that when the were on the team. Latest Omsk playoff campaign was also futile as in the 2015-16 season they were eliminated in the opening round by Sibirskie Snaipery. This season the situation changed drastically. A new great generation of players grew up in Omsk and even though their KHL team plays their home games in Balashikha, Moscow Region, the Omskie Yastreby still play in their hometown. The ‘Hawks’ began the season with three consecutive losses but they began winning more games then losing and by the end of 2018 the team was solidly in playoffs position. Omskie Yastreby hit a bit of a slump towards the end of the regular season as they lost four games in a row to Mamonty Yugry and Belye Medvedi Chelyabinsk.


With the departure of Artyom Manukyan and Anton Kovalyov, new leaders emerged on the team. The Badanin brothers made their debuts for Omskie Yastreby and established themselves as elite players right away. In the end Ilya Badanin led Omsk in points, while Roman Badanin had the most assists. Ilya represented the club at the 2019 JHL Challenge Cup, although his brother still came to Nizhnekamsk to provide support. Maxim Melnikov was just a few points behind the Badanins as he almost hit the 40-point plateau. Omskie Yastreby coaching staff had to make a tough choice regarding their goaltending line. Georgy Dubrovsky played more games, but Georgy Romanov looked better in key games against rivals. Pavel Yelizarov had a prolific season and led Omskie Yastreby defensemen with 25 points.

Omskie Yastreby faced the mighty Stalnye Lisy in the opening round of the playoffs. The latter also know what it takes to win Junior Hockey League championship title. However, that wasn’t a problem for the ‘Hawks’ as they decided the series in the shortest time possible, winning three consecutive games for a sweep.

The ‘Hawks’ faced Mamonty Yugry in the quarterfinal and the series went to deciding Game 5. Game 1 was held in Khanty-Mansiysk and the visitors came out on top. Ilya Loza scored the only goal in Game 2, after which the teams went to Omsk tied 1-1.

Each team won a game in Omsk as well. Mamonty Yugry prevailed in Game 3 with the final score of 2-1. The following day it was the ‘Hawks’ who celebrated the win with the same final. It all boiled down to Game 5, in which Omskie Yastreby looked gassed, while Khanty-Mansiysk were determined to proceed to the semifinal round for the first time since 2013. The ‘Mammoths’ won the game 5-1. Nevertheless, Omskie Yastreby should be given credit for the way they competed. 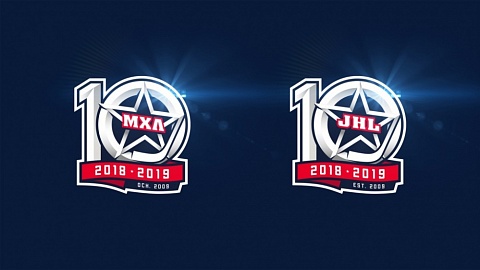 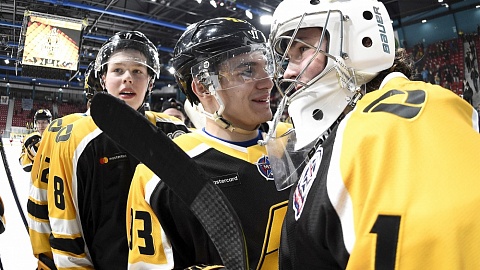 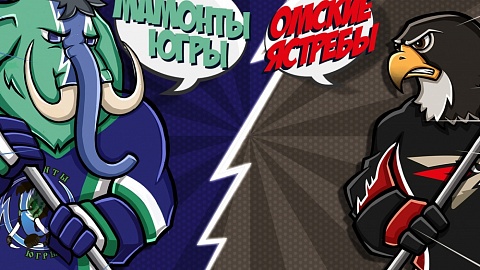