Altai
News
ANDREI FEDOTOV: “HOPEFULLY, I CAN WIN ANOTHER JHL MEDAL AS A COACH”
MASTERPIECES BY ABROSIMOV AND DEMIDOV, DYNAMO DOMINATION IN THE WEST. JHL WEEK ROUND-UP
ALEXANDER GUSKOV: “THERE’S PLENTY OF TALENT IN JHL. ALL THEY NEED IS A CHANCE”
“I PLAY AT THE RINK I USED TO COME TO AS A KID”. QUOTES BY TOP PLAYERS OF THE WEEK
DYNAMO DOMINATE SEVEN DAYS, TUMANOV STEPS INTO THE SPOTLIGHT. JHL WEEK ROUND-UP
BELYE MEDVEDI GET ON A ROLL, MAMONTY YUGRY WIN EIGHT STRAIGHT. OCTOBER 10TH ROUND-UP
NOT A WORD ABOUT HOCKEY. ILYA PARANIN
CHAYKA AND RIGA BLANK OPPOSITION, KRASNAYA ARMIYA AND DYNAMO WIN IN ST. PETERSBURG. OCTOBER 9TH ROUND-UP 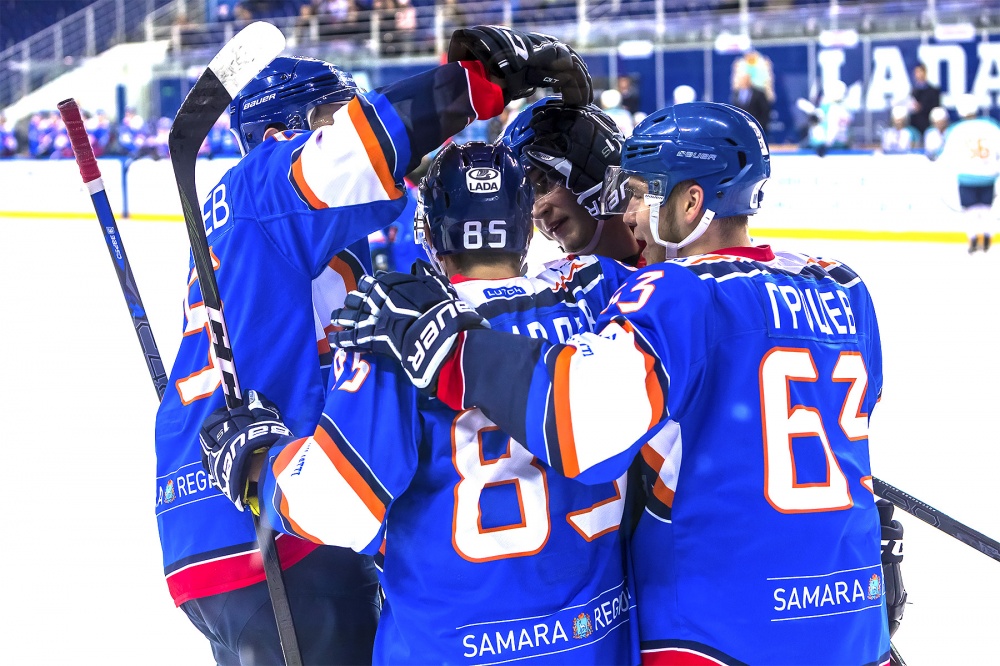 Just two regular season games took place in Junior Hockey League and both of them were Eastern Conference matchups. Irbis hosted Snezhnye Barsy in Kazan, while Ladiya faced Altay in Togliatti. We take a look at both of the games in this daily review on JHL official website. 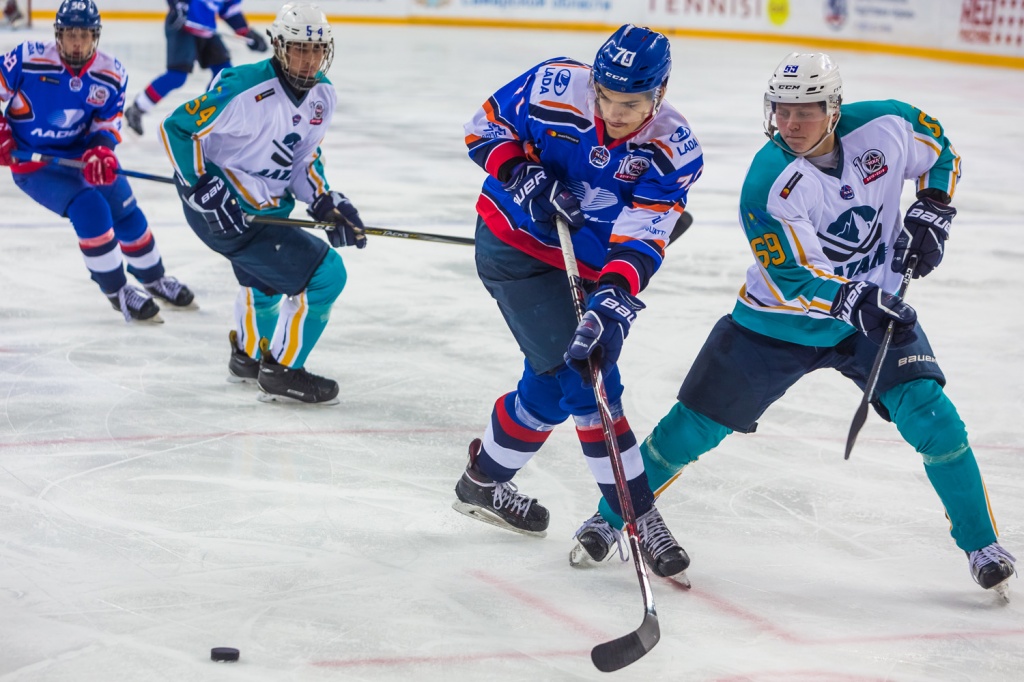 Ladiya Togliatti played hosts to Altay Ust-Kamenogorsk in the second game of the back-to-back series and managed to open up the scoring in the first period of play. Semyon Zhuravlyov buried the rebound after Denis Budenchuk missed Arseny Nikonorov’s net wide. Early in the 2nd period Zhuravlyov scored his second of the game when Togliatti locked the opposition in their defensive end, not allowing them to exit it for a long time.

Second half of the period fruited a lot of goals, most of which were scored by the home team. Leonid Nekolenko, Milan Zinatullin and Yegor Dobrodum further improved Ladiya’s great lead. Only after that did Altay manage to solve Nikonorov – Roman Yepischev found the back of the net. In the final stanza Togliatti allowed a goal but still had the momentum on their side en route to a blowout win. Konstantin Kukharev and Viktor Bashlayev got a tally each for the home side. Altay got another marker from Denis Budenchuk but that changed nothing in the big picture. Ladiya Togliatti enjoy a remarkable 7-2 win on home ice.

Irbis get a win with a late marker 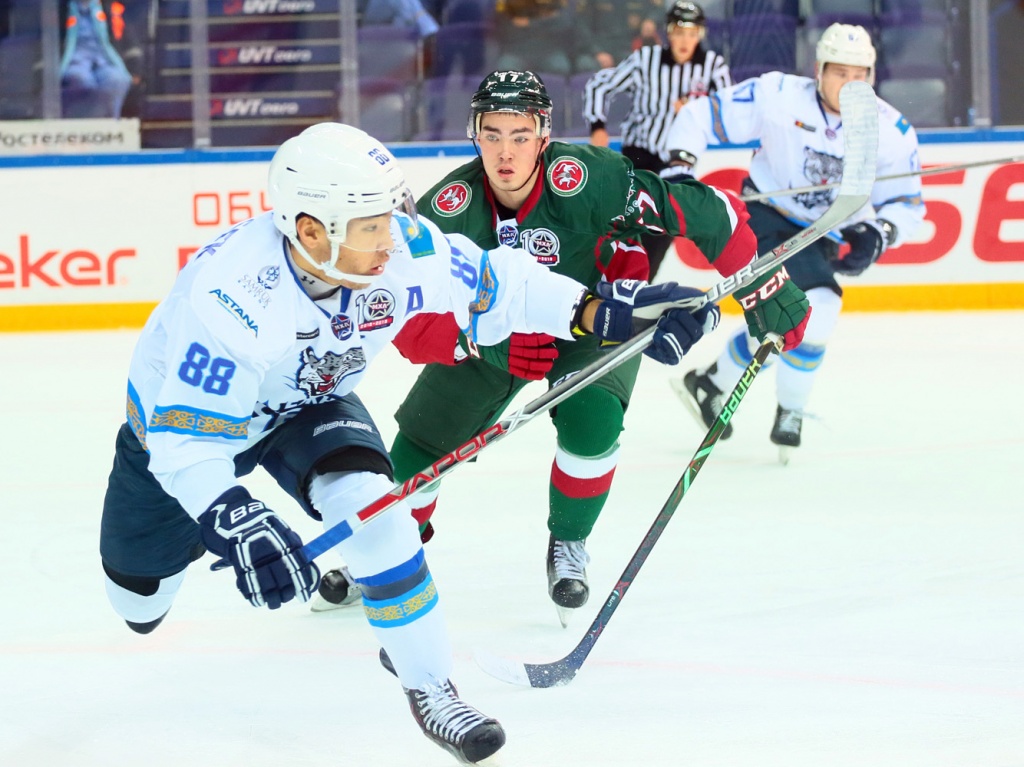 Kazan, who felt good about themselves after getting their first regulation win in a long time, came out hard and peppered Denis Karatayev with shots, finally getting one past him ten minutes in. The goaltender stopped Razat Timirov’s shot but Artyom Galimov pounced on the rebound and tucked it home. Astana brought it back to even with a powerplay marker, converting on Danila Klimov’s penalty. Artur Gatiyatov centered it from behind the net with a backhander, Daniil Kiselyov found himself all alone in the slot and he had no trouble putting it in.

Early in the second period of play Galimov got a minor penalty and the visitors got their first lead of the game – Oleg Boyko found his target with a long shot. Five minutes later Snezhnye Barsy conceded a breakaway and Maxim Bykov made them pay for that. The forward broke loose from two defensemen and beat Karatayev. 31 minutes in Kazan got back in the lead – former Reaktor Nizhnekamsk forward Razat Timirov scored his very first goal for Irbis.

A few minutes into the third stanza Astana leveled it again – Kirill Baldin took a shot on net, Artur Akhtyamov had a piece of it but the puck still trickled into the net a split second after. And yet it was Kazan who scored the game-winning goal late in regulation. Dias Guseinov got a minor penalty and it cost the visitors. A quick offensive rush and Islam Khasanov hits the twine. Irbis win the high-scoring game 4-3 on home ice.