KRS Heilongjiang
News
MASTERPIECES BY ABROSIMOV AND DEMIDOV, DYNAMO DOMINATION IN THE WEST. JHL WEEK ROUND-UP
ALEXANDER GUSKOV: “THERE’S PLENTY OF TALENT IN JHL. ALL THEY NEED IS A CHANCE”
“I PLAY AT THE RINK I USED TO COME TO AS A KID”. QUOTES BY TOP PLAYERS OF THE WEEK
DYNAMO DOMINATE SEVEN DAYS, TUMANOV STEPS INTO THE SPOTLIGHT. JHL WEEK ROUND-UP
BELYE MEDVEDI GET ON A ROLL, MAMONTY YUGRY WIN EIGHT STRAIGHT. OCTOBER 10TH ROUND-UP
NOT A WORD ABOUT HOCKEY. ILYA PARANIN
CHAYKA AND RIGA BLANK OPPOSITION, KRASNAYA ARMIYA AND DYNAMO WIN IN ST. PETERSBURG. OCTOBER 9TH ROUND-UP
DYNAMO MOSCOW SCORE 9 GOALS, SOAR TO ON TOP OF THE WEST. OCTOBER 7TH ROUND-UP 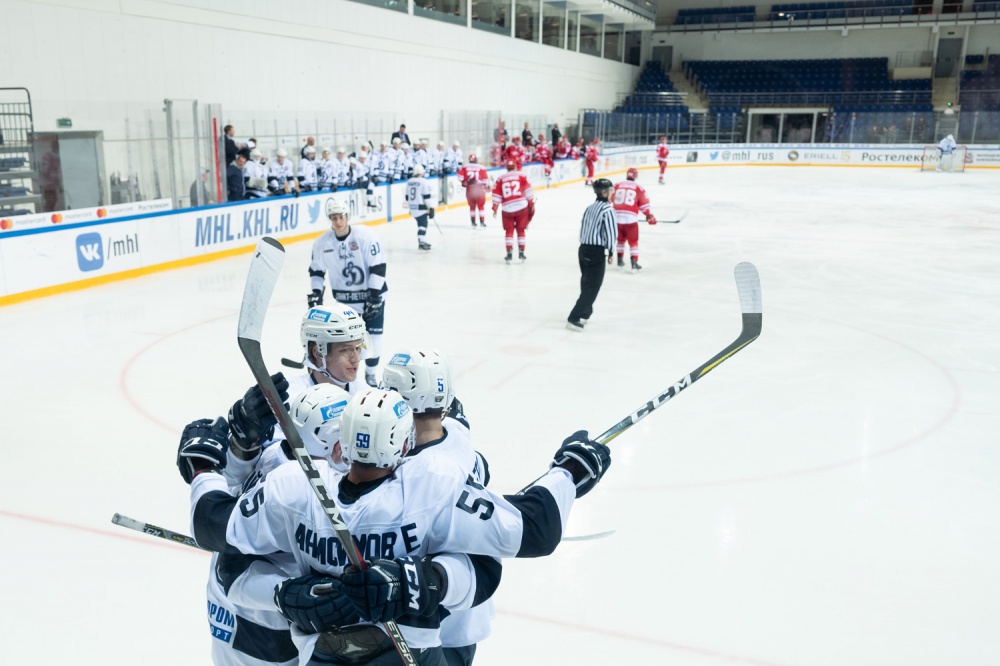 Thursday was a busy day in Junior Hockey League as it featured ten games spread out in both conference. It all began at 1pm Moscow time JHC Spartak and JHC Dynamo St. Petersburg hit the ice. All that and more in today’s daily review on official JHL website. 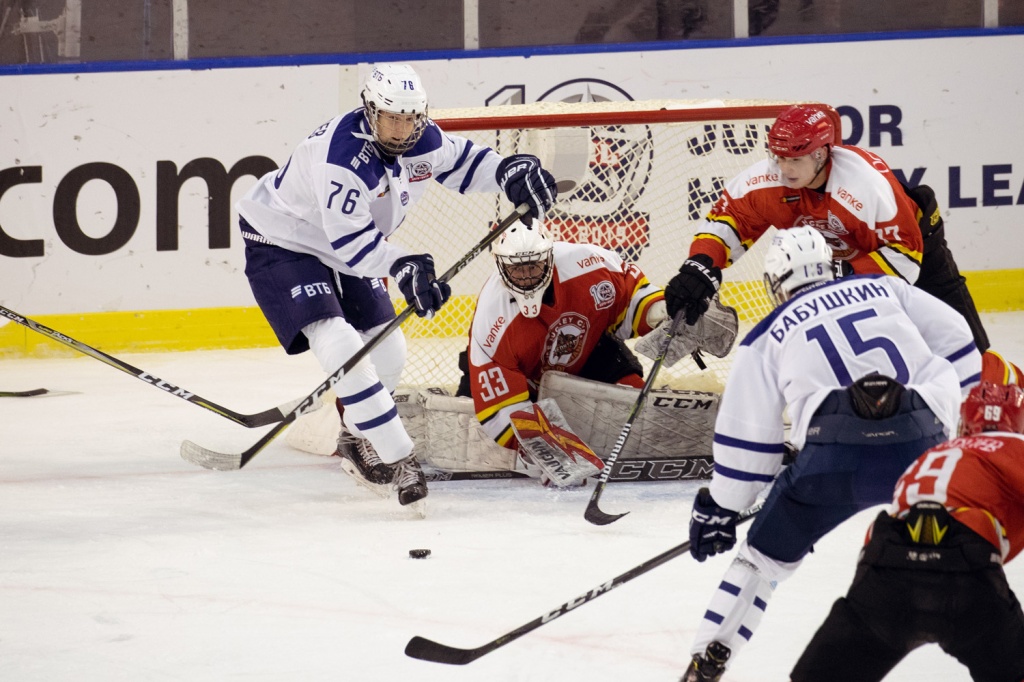 Kunlun Red Star Heilongjiang kicked off their second home back-to-back series. This time they faced JHC Dynamo Moscow. The blue-and-white had the momentum, which was of no surprise, and yet failed to find the back of the net in the first period of play. The got on the scoreboard only midway through the next frame. Hassan Al-Dailaui converted on Ryan Riggs’ minor and two minutes later Vladislav Mikhailov doubled the lead. After Ilya Volkov and Artyom Lobanov’s bout Maxim Chuvilov got another powerplay marker.

With five minutes till the second intermission Fyodor Moshkin improved the lead to 4-0. The ‘Dragons’ replaced Paris O’Brien for Kevin Qiao for the third period. He also got scored on – Ilya Kruglov and Vladislav Kazamanov got the markers. Ivan Kulikov stopped all 15 shots he had to face and got his first career Junior Hockey League shutout. 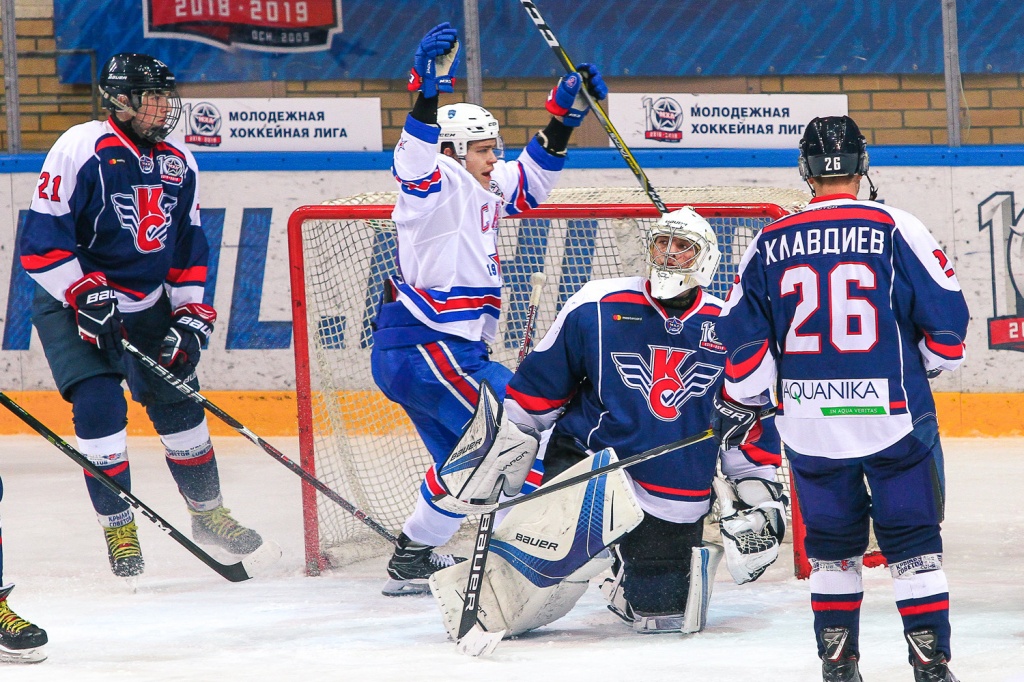 The game ended just the way it started – with a rivalry game between Moscow and St. Petersburg teams. This time Krylia Sovetov Moscow continued their home stand as the faced last season’s runners-up SKA-1946 St. Petersburg. First goal of the game came 29 minutes in – Ivan Manin scored for the visitors. Early in the third stanza Vitaly Lebbyodkin stole the puck from a defenseman on his own blue line, got in on a breakaway and roofed it past the goaltender.

That goal turned out to be the only one ‘Soviet Wings’ would get all night. ‘Army men’ looked like a better team. Vasily Podkolzin put the visitors back in the lead and Ivan Morozov set the final score. SKA-1946 win 3-1 on the road. 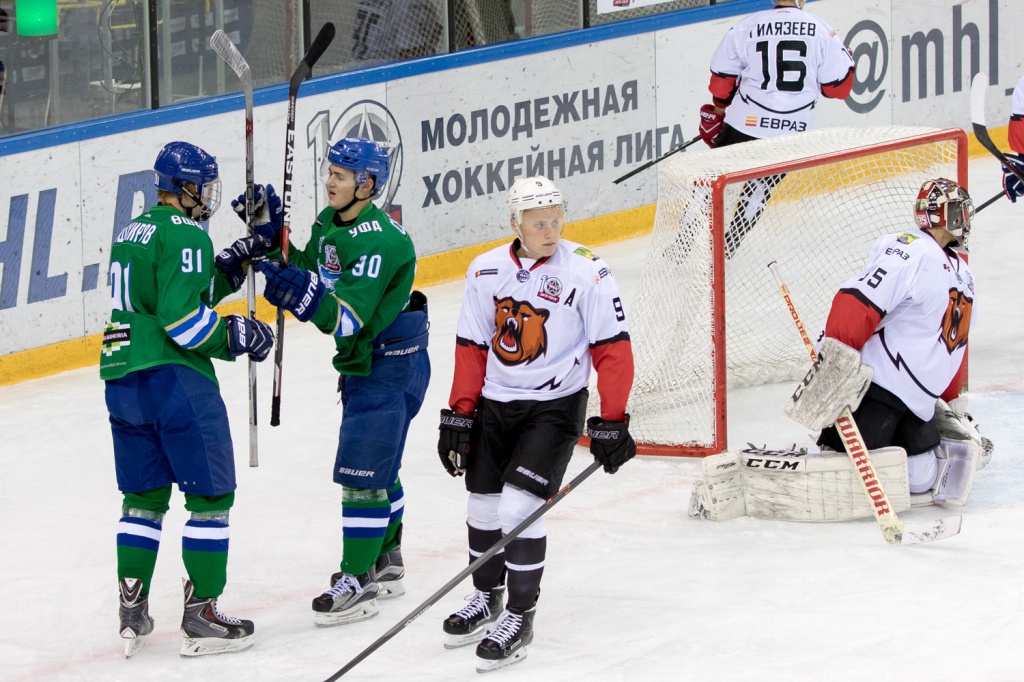 Tolpar Ufa played hosts to Kuznetskie Medvedi. Ufa won the first game of the back-to-back series with a shutout. This time they beat Vladislav Yugov for the first time eight minutes in – Danil Bashkirov got the marker. 24 minutes in Tolpar got their goal waved off but a minute later Mikhail Kozlov scored one that did count. It took ‘Bears’ 86 minutes to get their first tally in Bashkortostan. Although, just as Danil Kolodko finally solved Yuri Groshev, Nikita Anokhin restored the 2-goal margin in the very next shift.

Five minutes into the third stanza Nikolai Sytyi scored on a powerplay and then Pavel Sinyavsky put it out of reach. Mikhail Bogdashkin scored another goal for the visitors but it changed nothing in the big picture. Tolpar take it 5-2 on home ice. 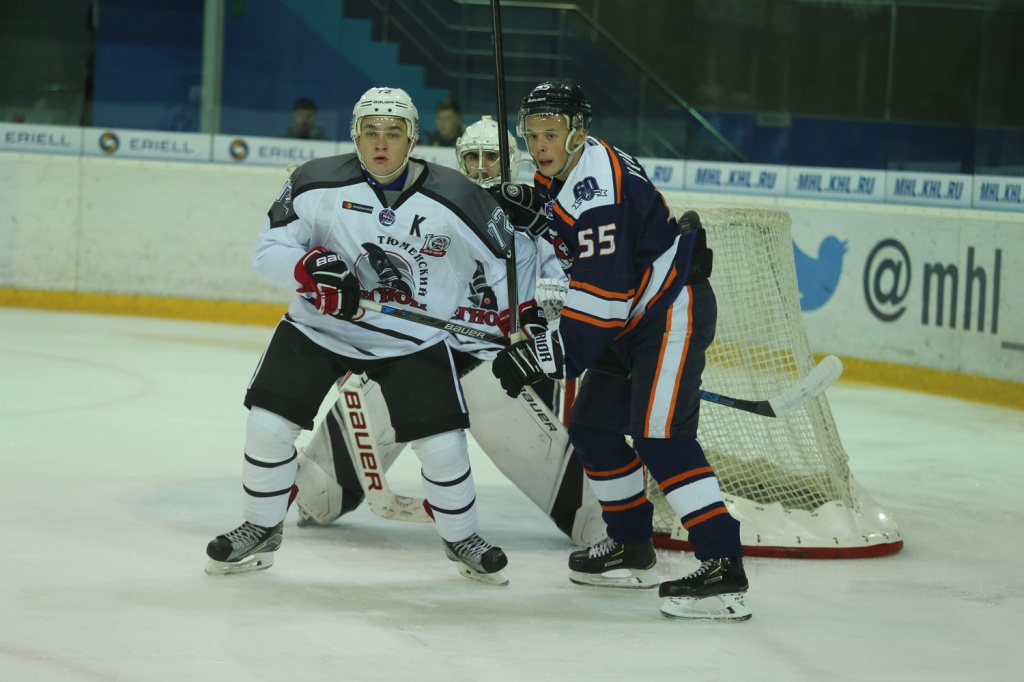 Sarmaty Orenburg played hosts to Tyumensky Legion in the second game of the back-to-back series. First goal came 11 minutes in – Danil Malakhov beat Vladislav Bulygin with a low shot. Late in the frame Dmitry Salvasser got into the zone down the wing, passed it to Yegor Ageyev and he redirected it in to make it 2-0.

Second period of play fruited no goals but the visitors looked better and created a few good scoring chances putting Artur Mustafin to work. Fast-paced hockey continued in the final stanza. Tyumen looked like a better team and came really close to scoring on Orenburg. Viktor Volkov duked it out with Nikita Bryutov and both received 5-minute majors. Daniil Sokolka set the final score late in regulation. Mustafin stopped 23 shots for his second consecutive shutout and Sarmaty enjoyed a 3-0 win on home ice. 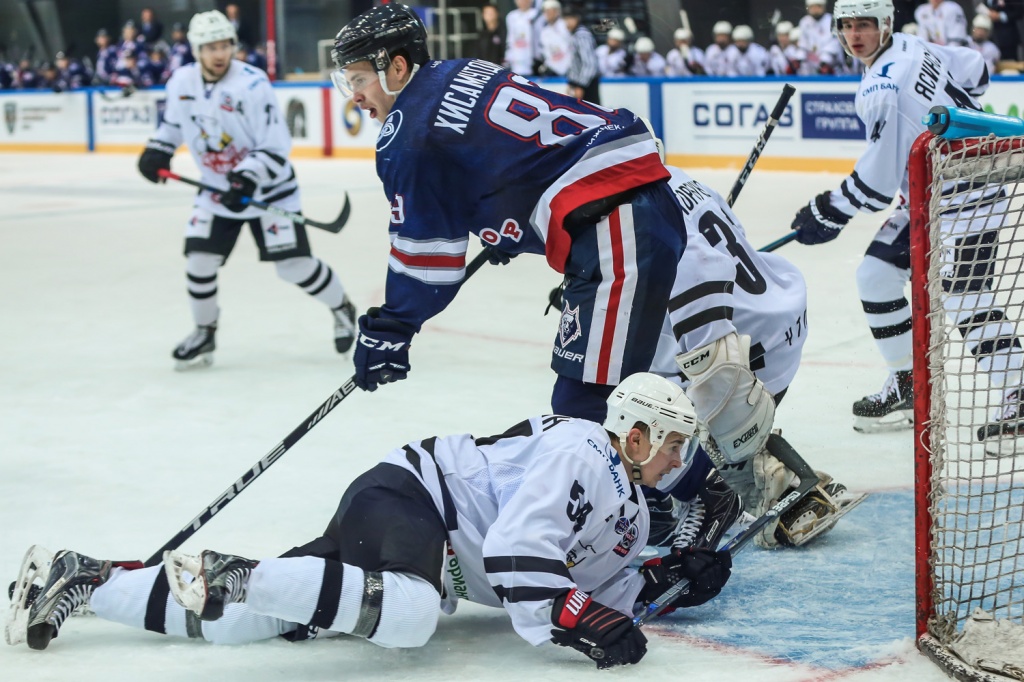 Belye Medvedi Chelyabinsk, who had lost to Reaktor Nizhnekamsk in the first game of the back-to-back series, learned their lesson and it was obvious right from the get-go. Just eight minutes into the opening period of play Konstantin Lukin opened up the scoring. A little later Platon Popov beat Yaroslav Ozolin for the second time and Chelyabinsk had a 2-0 lead after 20. Five minutes into the next frame Artemy Murtovin improved the lead to 3-0. Only after that last season’s bronze medalists managed to solve Ilya Gorbunov – Maxim Groshev got the marker.

With ten minutes remaining to play in regulation Ilya Paranin gave Reaktor some hope as he brought the game back to within one. However, ‘Polar Bears’ stood their ground and managed to secure the win with an empty-netter by Vladislav Kuliyev. Belye Medvedi win a tough game 4-2 on the road. 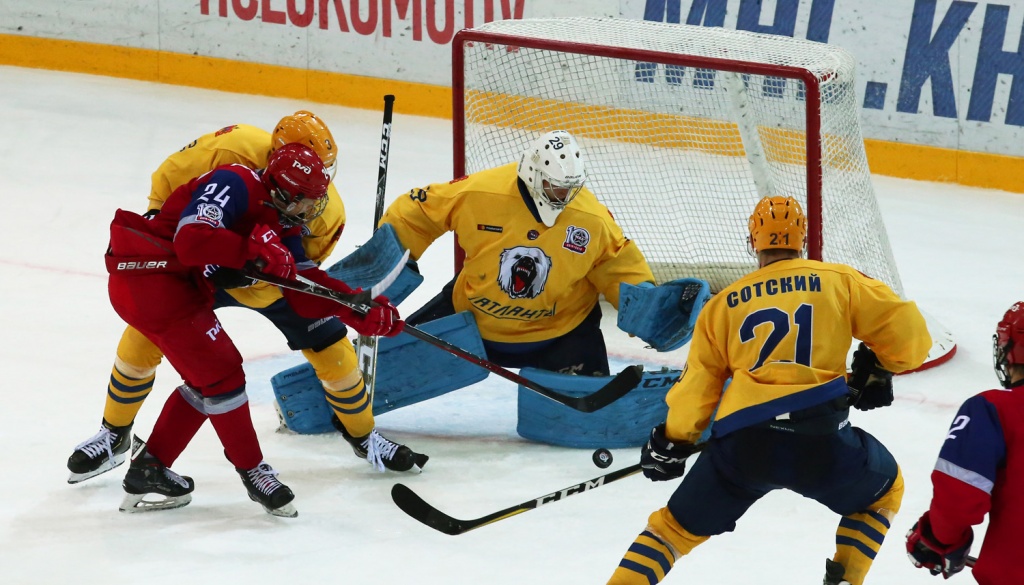 Atlanty Moscow Region went to Yaroslavl to face reigning Kharlamov Cup champions. Midway through the opening period Loko ran into a penalty problem. Alexander Dariyn got a minor for hooking and just 30 seconds later Danila Dyadyenkin joined him in the box. Moscow Region pounced on that chance and Sergei Gonacharuk buried the rebound on a shot from the blue line.

Despite heavily outshooting the opposition, Yaroslavl managed to bring it back to even only in the third stanza. Vladislav Chervonenko got one in but it was counted only after video review. ‘Railway men’ scored the game-winning goal late in regulation. Mikhail Smirnov received a pass from behind the net and one-timed it past Konstantin Sharapov.

Khabarovsk get off to a good start in Chekhov 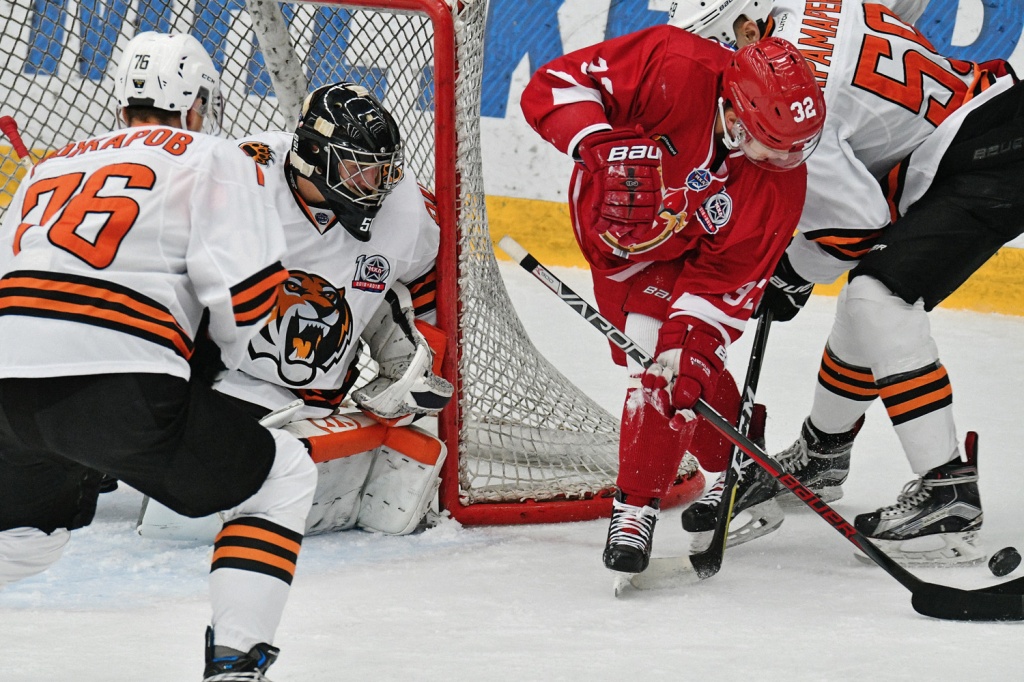 Amurskie Tigry Khabarovsk continued their road trip as they made their way to Chekhov. In the opening period of play home team spent a lot of time on a powerplay as Khabarovsk got a string of penalties and Nikita Krutov got a misconduct call against him as well. However, Russkie Vityazi failed to convert that advantage into goals. However, what they couldn’t get on a powerplay, they did at even strength. Maxim Zlodeyev opened up the scoring, while Mark Verba picked up an assist on the play.

With two minutes remaining to play in the second period Amurskie Tigry got back even – Nikita Linnik got the equalizer. Both teams had a fair share of scoring chances in the third stanza but neither of them could capitalize on them and regulation solved nothing. The visitors prevailed in overtime – Evgeny Babushkin won it for the ‘Tigers’. 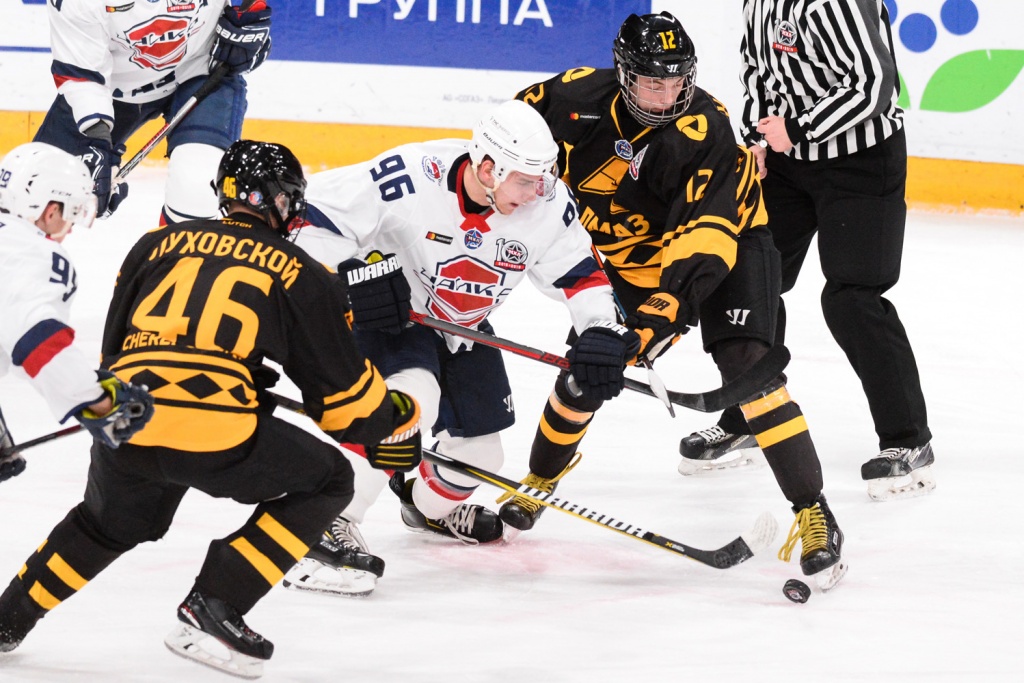 Almaz hosted Chayka Nizhny Novgorod in Cherepovets and they opened up the scoring eight minutes in – Vladislav Fyodorov found the back of the net. Nizhny Novgorod converted on Artur Shaikhutdinov’s minor for high-sticking. Evgeny Kazakevich got the tally. 44 minutes in Vladislav Gertsik got a minor for tripping and it took the visitors just mere seconds to get another powerplay goal – this time it was Nikita Tomilov who caught Konstantin Shostak off guard.

Cherepovets did their best to save the game but Chayka’s defense was on top of their game. Kirill Klopov set the final score with an empty-netter. Chayka take it 3-1 on the road.

Exciting game between Spartak and Dynamo 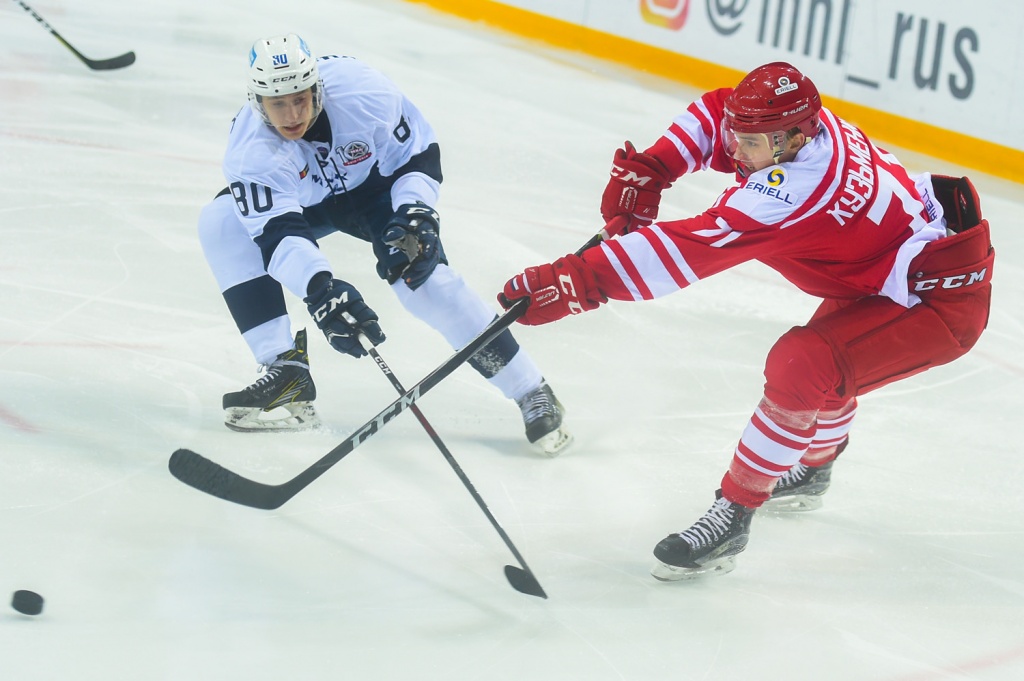 Moscow and St. Petersburg didn’t start by feeling each other out first but engaged in fast-paced hockey instead and Spartak got the first goal of the game – just three minutes in Yegor Kruzhenkov put his team in the lead. Kruzhenkov was left all alone in the slot, Yegor Kuzmenko stole the puck and threw it to the slot for the goal. Dynamo got off to a great start in the second period of play – in a span of just over five minutes Sergei Khokhlov, Maxim Mikhailov and Veniamin Baranov beat Andrei Skovronsky three times. 30 minutes in Mikhail Bulimov brought the game back to within one, but then Mikhailov scored his second of the afternoon to give Dynamo a 4-2 lead.

54 minutes in Kruzhenkov buried the rebound for his second of the game instead – the goal was counted after video review. However, home team failed to force overtime. Bogdan Zhilyakov scord another one on the empty net and JHC Dynamo St. Petersburg won it 5-3 on the road.

HC Kapitan enjoy their first blowout win of the season 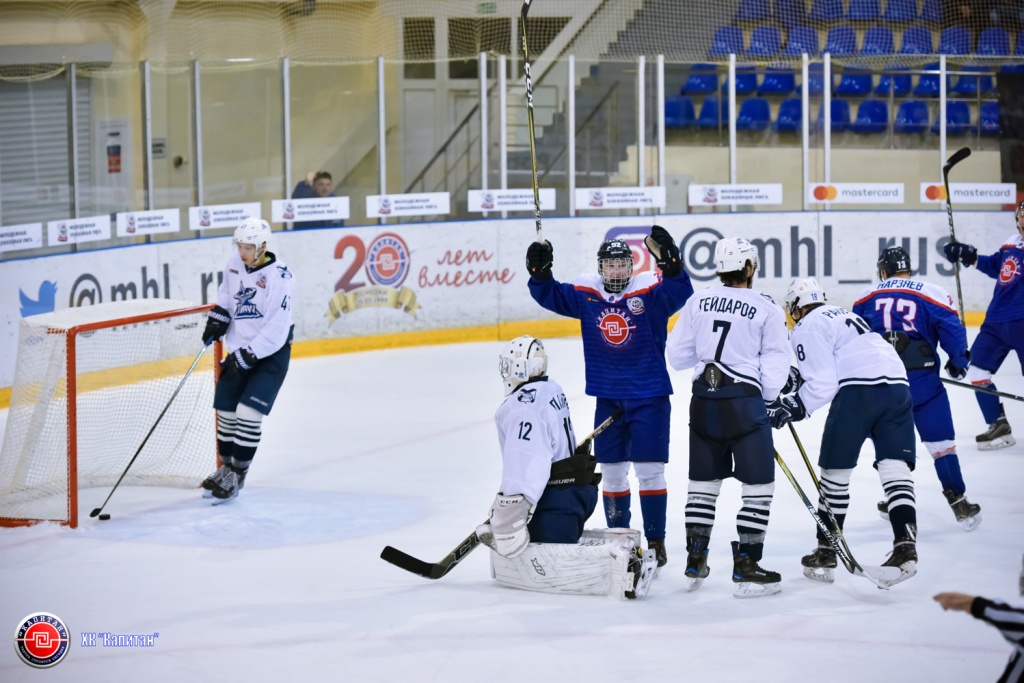 Russian Far Eastern teams came to Moscow Region. This week Taifun Primorie Region faces HC Kapitan Stupino. Home team finally showed the brand of hockey their fans expected from them. Daniil Tyutchev opened up the scoring six minutes into the game. After a string of penalties in the second period the teams got into gear and scored three goals in as many minutes – Grigory Ponkratov and Vasily Narzyayev netted one each for Kapitan, while Sergei Nikitin chipped in one for Taifun.

That goal proved to be the only one for the visitors. In the last stanza they allowed two more goals from Amir Garayev and Georgy Trofimov. The game turned out to be rather dirty. The teams combined for a huge number of penalties especially late in regulation. There also were a few fights. In the end HC Kapitan won 5-1.