Eight regular season games took place in Junior Hockey League on September 24th. As per usual, there was a fair share of exciting matchups and a few surprises. We take a look at all of them in this daily gameday review on official JHL website.

JHC Dynamo St. Petersburg get their revenge in Setun 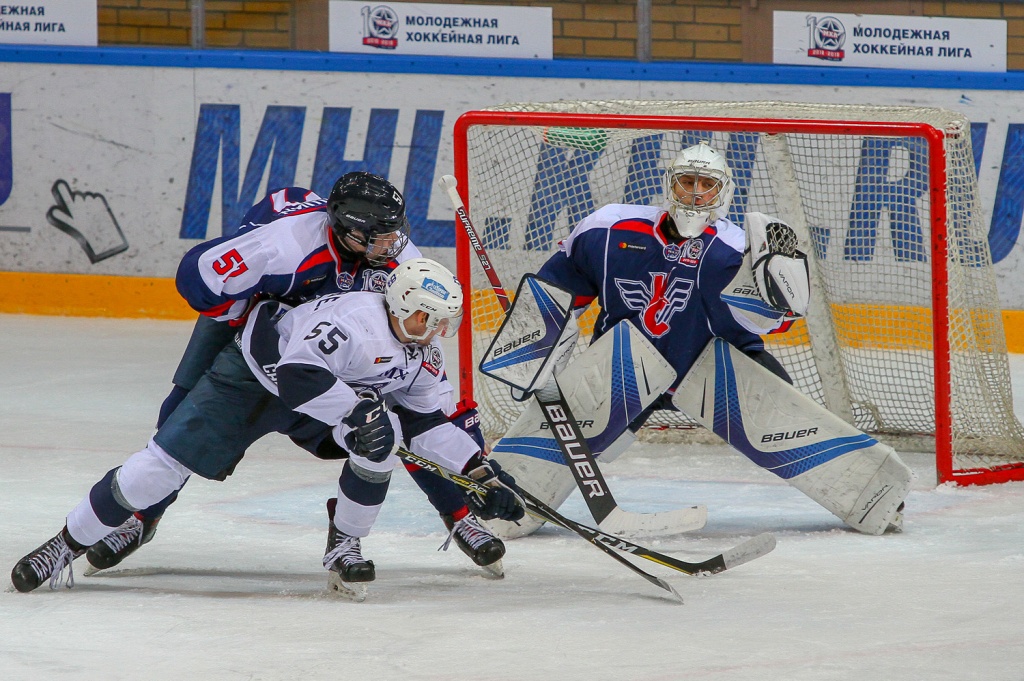 Krylia Sovetov Moscow looked well in the opening period of play of the second game of the back-to-back series against JHC Dynamo St. Petersburg. The teams created an equal number of scoring chances but Moscow capitalized on theirs twice – Alexei Gluschenko and Nikita Kizikov got the tallies. Second period featured a lot of goals. Anton Vasiliev brought Dynamo back to within one, while just three minutes later Maxim Vyatkin made it 3-1. The visitors got back even before the intermission as Alexander Zhabreyev and Nikolai Sulima found their targets.

Vyatkin scored his second of the game 38 minutes in but Moscow failed to protect their lead – Alexei Kudryavtsev sent it to overtime. Extra period of play solved nothing and St. Petersburg prevailed in the shootout – Zhabreyev scored the winner.

Kunlun get their first win of the season 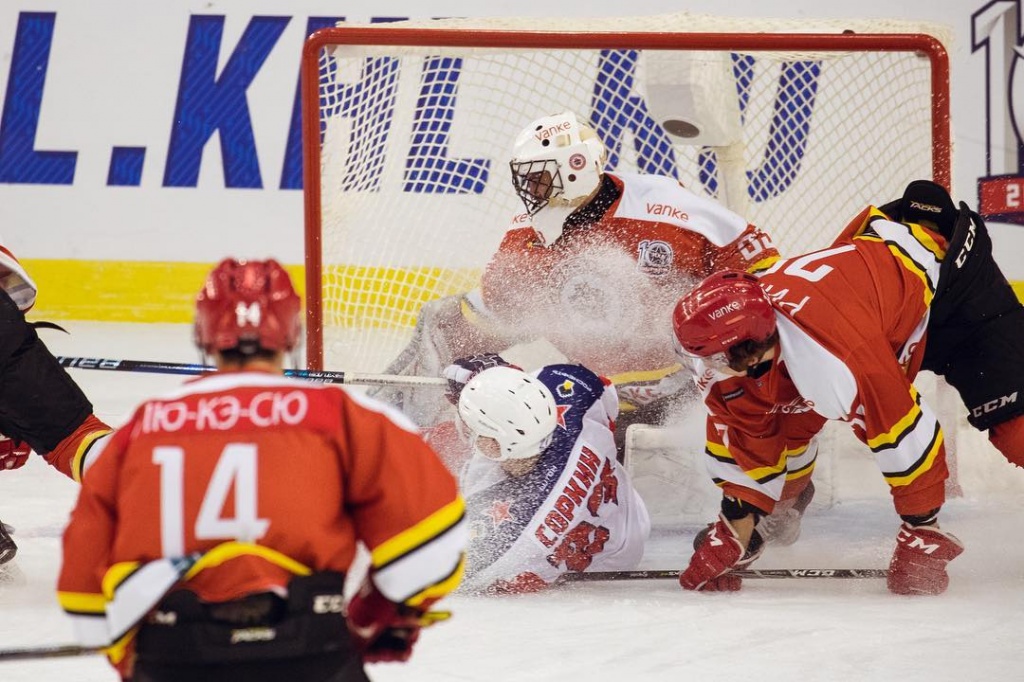 Krasnaya Armiya Moscow faced Kunlun Red Star Heilongjiang in Harbin in the second game of the back-to-back series. It has to be noted that not only Chinese team lost all seven previous games, but they most of them were blowout fiascos. Nevertheless, they got their first win of the season against no other but 2-time Kharlamov Cup champions. They also got off the wrong foot as Alexander Chernov put the visitors in the lead ten minutes in. Nolan Lee got a goal back in a hurry but ‘army men’ got back in the lead before the intermission as Maxim Sorkin found the back of the net.

‘Dragons’ brought it all back to even. This time Russian import players got the job done – Maxim Sarapultsev found his target, while Mikhail Abramov and Vsevolod Skotnikov got the assists. Home team grabbed the lead on one of their few counter-attacks – Runchen Zuo sent another one in. Late in regulation Chinese players did everything they could to protect their net and got another tally – Abramov got his second of the game as he hit the empty net.

After the final buzzer Kunlun players were the happiest men in the world – not only they got two points, but they also beat one of the top teams of the league.

Ladiya edge Altay in a thriller 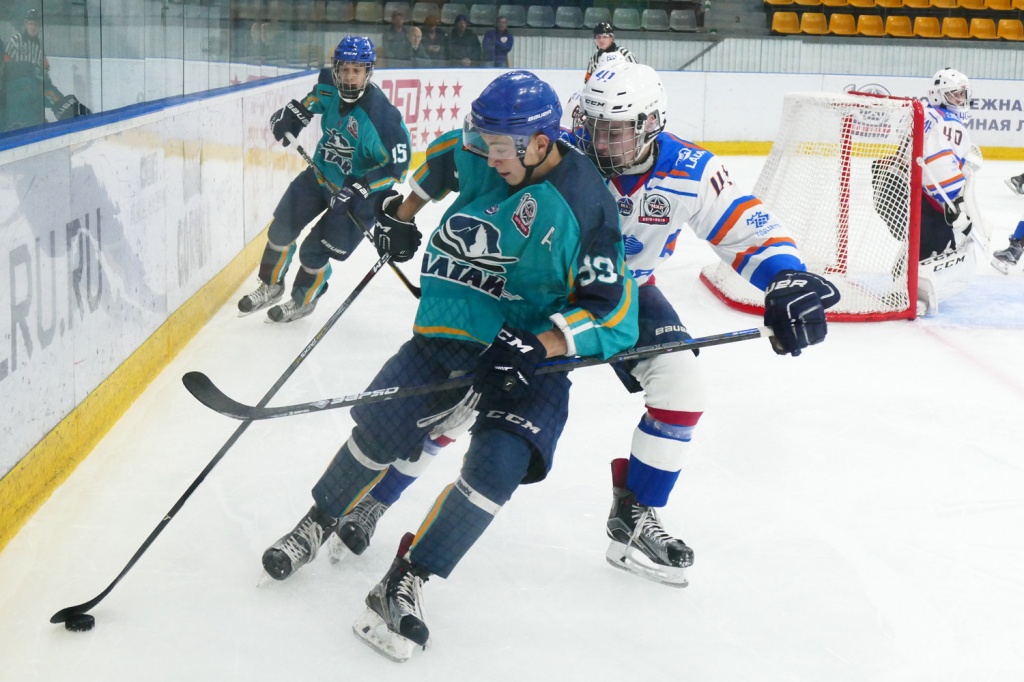 Altay Ust-Kamenogorsk played hosts to Ladiya Togliatti. Two Eastern Conference teams combined for atypical Eastern productivity. Home team had the momentum on their side in the opening two periods of play while Togliatti were spending a lot of time in their defensive territory backed up by their netminder Artyom Zabrodin. Early in the third stanza the visitors gave their goaltender a reason to cheer – Altay players got caught on a counter-attack, which led to a 2-on-1 rush and Andrei Grishakov finished off a beautiful passing play as he tapped it home from in tight.

Ust-Kamenogorsk rushed down the ice looking for the equalizer and got what they wanted – Pyotr Grishakov snapped it home on the assist from behind the net by Roman Yepishev. The teams were tied up till the final minute of regulation. Then Altay allowed another counter-attack, Vladislav Nurek stopped Vladimir Krotov’s shot but Maxim Tsybin put it home on the rebound. Ladiya get a 2-1 win in a tough game on the road. 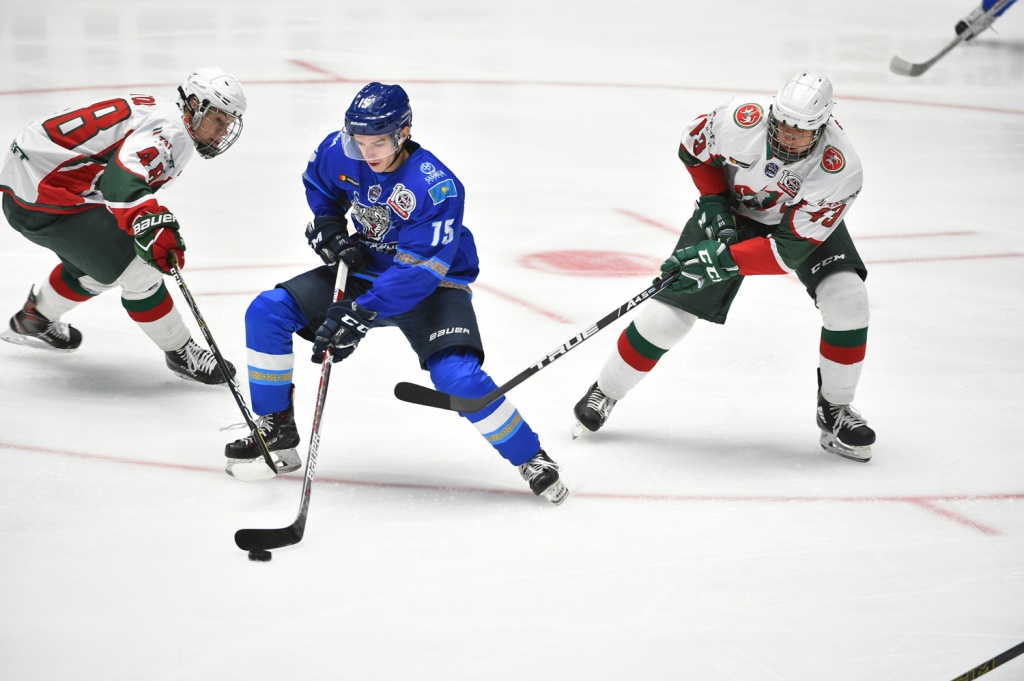 Snezhnye Barsy Astana hosted Irbis Kazan in ‘Cat Rivalry’. Kazakhstan team played their first game on home ice this season. There were a lot of physical battles in the opening period of play. Kazan had a chance to open up the scoring on a powerplay as Sayan Daniyar got a minor penalty, but they failed to convert on it. Home team managed to convert their advantage into goals past the halfway mark of the second period – Maxim Musorov got one in at even strength, while Samat Daniyar scored on Snezhnye Barsy’s initial powerplay of the game.

Irbis also scored on a powerplay as Mikhail Shetopalov found the back of the net. However, with just a second remaining on the clock in the period Musorov scored his second of the game and the teams went to the dressing-rooms with Snezhnye Barsy leading 3-1. The score remained unchanged in the following period. Astana stood their ground and grinded it down to the win. 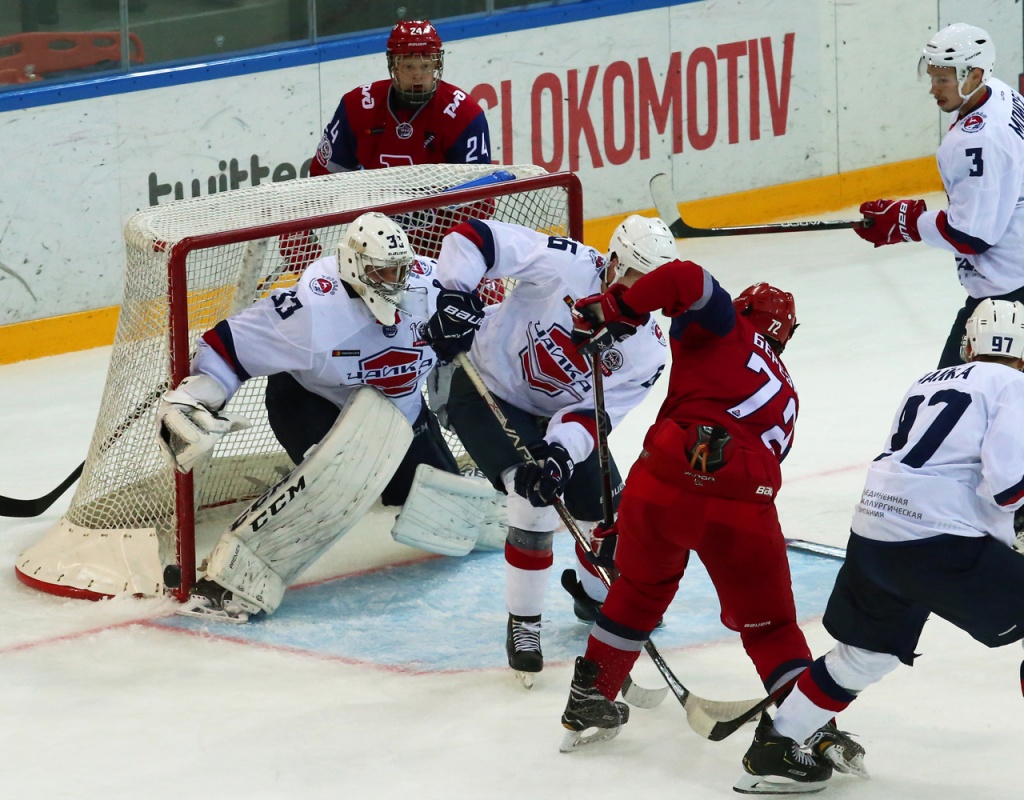 After winning a difficult game against Chayka Nizhny Novgorod in the opening matchup of the back-to-back series, Yaroslavl shook up their roster and put a lot of Loko-Yunior players in the line-up. Loko opened up the scoring just three minutes in – Danila Dyadyenkin took a harmless-looking shot on net but somehow it fooled Kirill Kozhokar – the netminder failed to cover it up and the puck glided over the goal line.

Yaroslavl improved their lead in the second period. ‘Railway men’ were spending a lot of time in the offensive end and finally got what they were looking for. Maxim Denezhkin, who had received a double minor a bit earlier, made up for that with a snipe from the slot. In the very next shift Nizhny Novgorod got on the board as well – Andrei Bednyakov found his target. 38 minutes in Mikhail Smirnov took a shot on net and Vladislav Chervonenko buried the rebound to make it 3-1. In the final stanza of the game Loko made it clear they were in fact the better team as they scored three unanswered goals – Yegor Manin, Nikita Zhukov and Kirill Slepets got the markers. Reigning champions take it 6-1 on home ice.

Taifun escape loss in regulation but still lose in the shootout 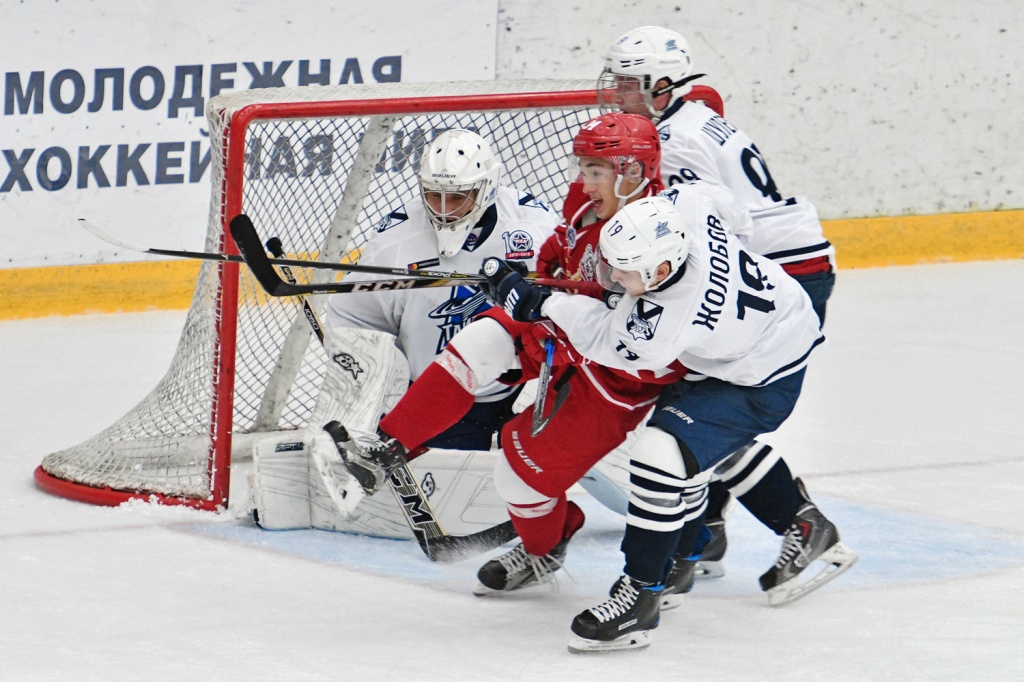 Russkie Vityazi Moscow Region hosted Taifun Primorie Region in the second game of the back-to-back series. Mark Verba, who has been on a bit of a roll lately, scored again – this time he sent it in off Oleg Kryl’s assist. Midway through the second period of play the teams exploded. That is especially true for Chekhov as in a span of 90 seconds they got goals from Mikhail Rastvorov and Dmitry Zaitsev. Primorie Region answered with a marker by Alexei Drobin, while with five minutes remaining to play in the frame Alexei Garevskikh pulled his team back to within one.

Taifun managed to bring it back to even with just 34 seconds remaining to be played in regulation – Drobin got his second of the game, secured a point for his team and forced overtime. The game went all the way to the shootout and Russkie Vityazi had the upper hand. Mark Verba scored the winner.

Almaz beat Atlanty in a goal-fest of a game 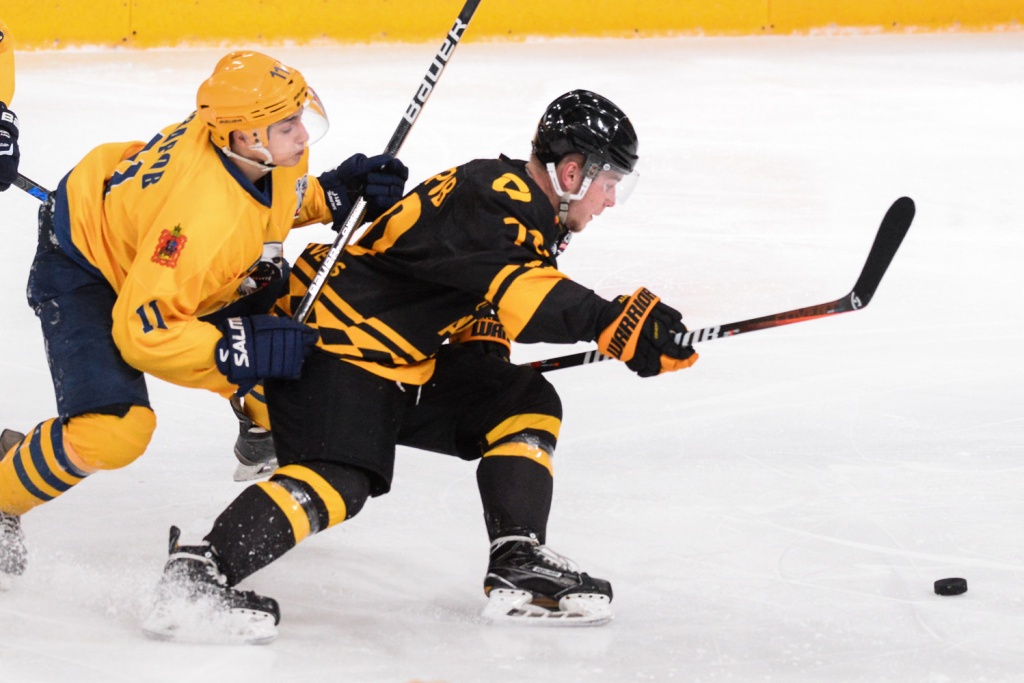 Atlanty Moscow Region and Almaz Cherepovets brought joy to the fans in the opening period of play as they scored quite a few goals, trading leads along the way. Mytischi got markers from Dmitry Silantyev and Danil Pischulin, while Mikhail Kalashnikov and Airat Zamaliyev scored for Cherepovets. Early in the second period they scored a few more – Nikita Khristov and Yegor Chizhikov found the back of the net. After that Konstantin Sharapov got yanked and Yegor Sinegubkin got his place in goal, while home team still had Dmitry Shugayev between the pipes.

Goaltender swap did visitors good – 27 minutes in Sergei Dudkin made it 4-3. Cherepovets once again brought the game back to even but Dudkin scored his second of the game right away and Shugayev got replaced by Konstantin Shostak. That helped home team as well – late in the period Gleb Morulyov tied it up again. Leonid Klimov and Pavel Zhirnov won the insane game for Almaz as they were the only once who got tallies in the final period of play.

Kramarenko wins it for Amurskie Tigry in Stupino 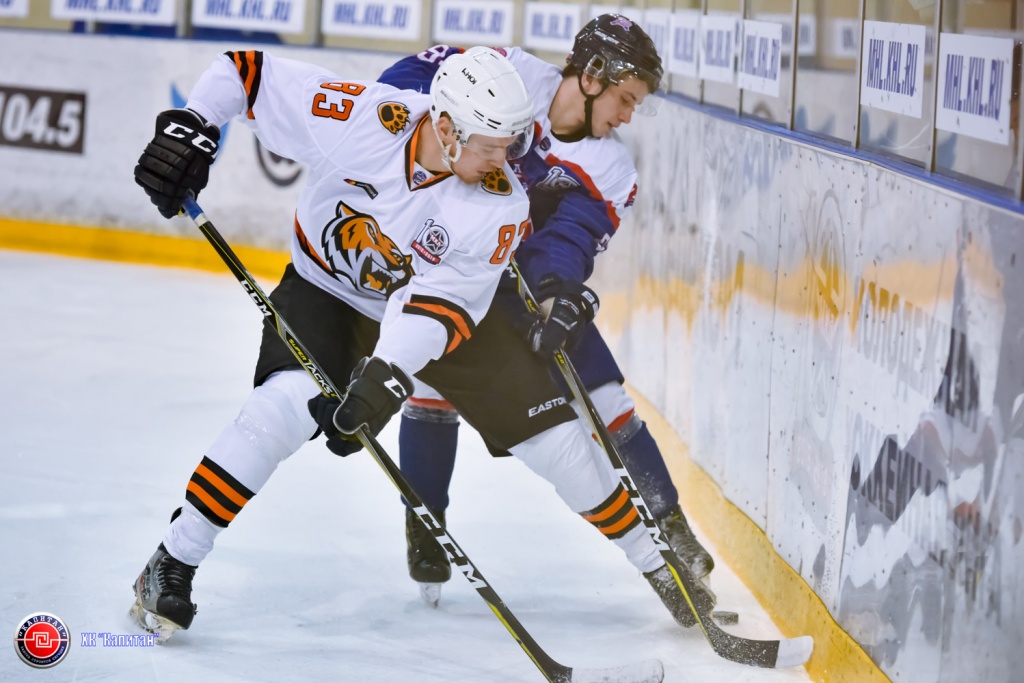 Amurskie Tigry Khabarovsk continued their back-to-back series in Stupino. They opened scoring four minutes in – Ivan Martynov found the back of the net. After a string of penalties, the puck entered Khabarovsk net but video review confirmed it was kicked in so the goal was waved off. Home team did tie it up 25 minutes in – Alexei Zhilin sent one past Grigory Kolupayev.

Key moment of the game came midway through the second period. Amurskie Tigry got caught with too many men on the ice, but the ensuing bench minor backfired on Stupino. The visitors put together a counter-attack and Yuri Kramarenko netted a shorthanded goal. Kapitan had the momentum in the remainder of the game but failed to score and the ‘Tigers’ won 2-1 on the road.