EQUALIZER WITH 10 SECONDS ON THE CLOCK, TAIFUN WIN THEIR 2nd

SKA-Varyagi
News
“I am of the same “slow ship” style as my father.” Maxim Mayorov – about moving to Yaroslavl, national team debut and passion for tennis
“I bought a cake and gave flowers to my mom with my first paycheck.” Yaroslav Tsulygin – about his JHL debut with Tolpar
Was signed up for hockey at the age of three, was dressed as a goalie in an extreme situation and looks up to Datsyuk: take a closer look at the leader of Irbis and the hope of Ak Bars
Edgar Varagyan: “When we were on the plane, guys told me: “He is an enforcer, he would beat you up with no sweat.” I thought: things happen, he would beat me up and so what?”
“As time goes by, taking a flight to Sakhalin feels almost like being stuck in Moscow traffic.” Daniil Veremeichik – the JHL's Best Player on Social Media
“Working out in a gym is a type of rest for me.” Ivan Murashov had the best season of his career, dreams of playing in the KHL and has not eaten any fast food for two years
“Condensed milk is the only unhealthy food available for the national team.” Raul Yakupov – about the Black Sea Cup, the KHL debut and the season with Reaktor
“Four years in the JHL was a great time. Winning the Cup with Dynamo was the best moment.” Ivan Didkovsky about junior phase of his career
Share

EQUALIZER WITH 10 SECONDS ON THE CLOCK, TAIFUN WIN THEIR 2nd 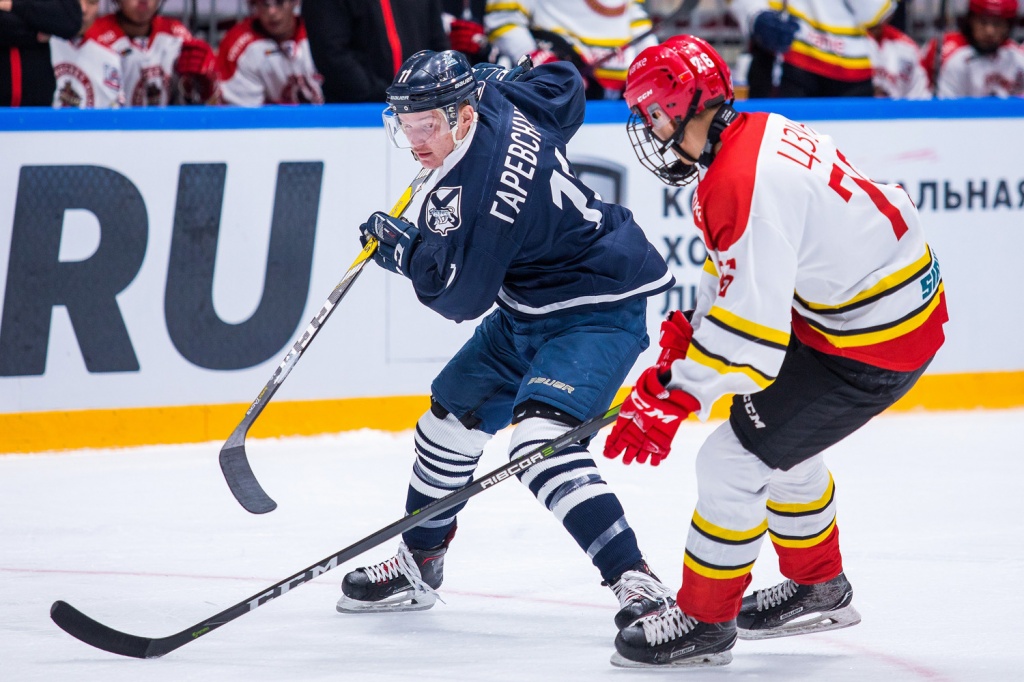 Gameday kicked off in Russia’s Far East as Taifun Primorie Region played hosts to Kunlun Red Star Heilongjiang. Home team enjoyed a 5-2 win. Six minutes in Nikita Ivashkin scored his first goal of the season. The Chinese got back even as Artyom Lobanov sent one past Vladislav Glazatov 14 minutes in. Primorie Region dominated in the second frame and scored three unanswered goals – Daniil Kuptsov and Alexei Garevskikh netted one each at even-strength, while Alexei Drobin chipped in a shorthanded marker, which incidentally was the first career Junior Hockey League goal for the 18 year old forward.

48 minutes in Ryan Riggs brought the Dragons back to within two but Taifun still had the momentum on their side and it was them who scored the last goal of the game – Ilya Dragun put it in the empty net, as Paris O’Brien vacated them for the extra-attacker. 5-2 and Taifun enjoy their second win of the season.

SKA-Varyagi salvage a point but still lose in Moscow 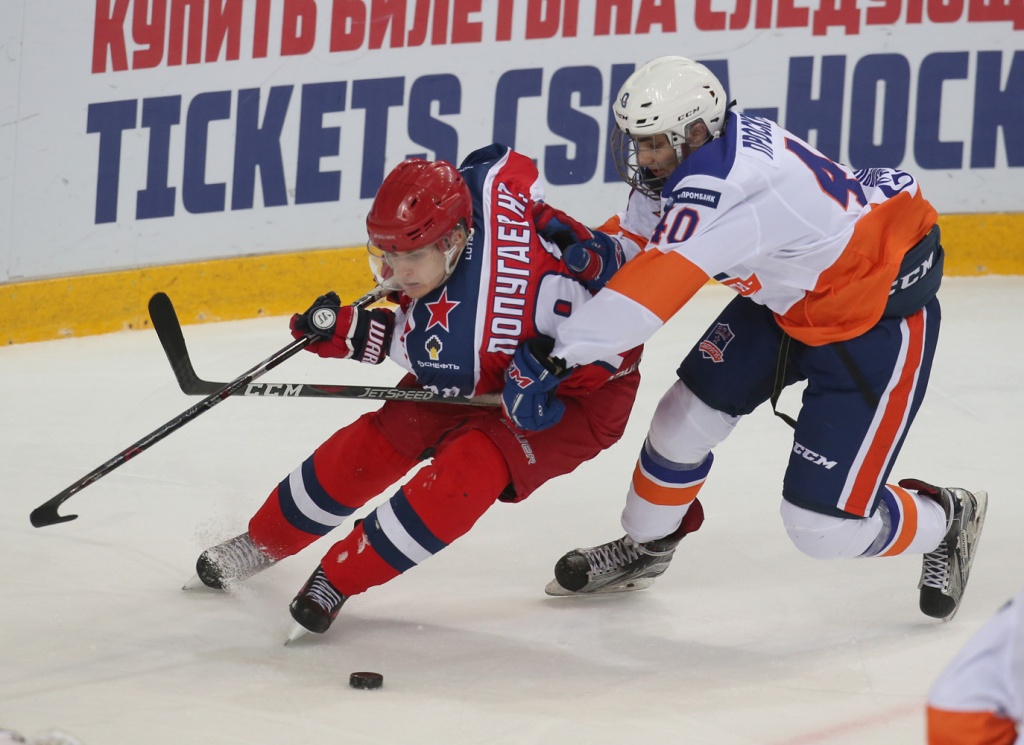 Krasnaya Armiya Moscow hosted SKA-Varyagi for the second game of the back-to-back series. Home team opened up the scoring in the opening period of play. They couldn’t score on the powerplay but then were successful at even-strength – Nikita Olegovich Popugayev (the only Popugayev who played in the series) found the back of the net as he tucked it home on the rebound, while he was left all alone in the slot.

Leningrad Region team hadn’t been able to solve Vsevolod Skotnikov the day before but 24 minutes in they managed to get one past him from the scrum in front of the net. However, the replay showed that the goal was scored illegally. The visitors had the momentum late in the second and in the third period and they did tie it up in their one final push – Denis Mikhnin stole the hopes of getting second consecutive shutout from 16-year-old Skotnikov. Nevertheless, home team still scored in the extra period – Mikhail Mescheryakov converted on a breakaway chance with 15 seconds remaining on the clock. Russkie Vityazi faced Atlanty in Moscow Region Rivalry. First period of play featured evenly matched teams but there was no score, while early in the second frame Evgeny Pogonchenkov whistled one past Daniil Chechelev to break the deadlock. Mytischi team continued to have the advantage and key moment of the game came late in regulation.
Vyacheslav Sarayev capitalized on a powerplay to give Maxim Bets’ men hope. However, late in the third stanza Chekhov ran into a penalty problem – Zakhar Bardakov and Nikolai Anufriyev received 2-minute minors just several seconds apart and Artyom Tereschenko converted on the great scoring opportunity. Home team ran out of time and Atlanty won it 2-1 on the road. 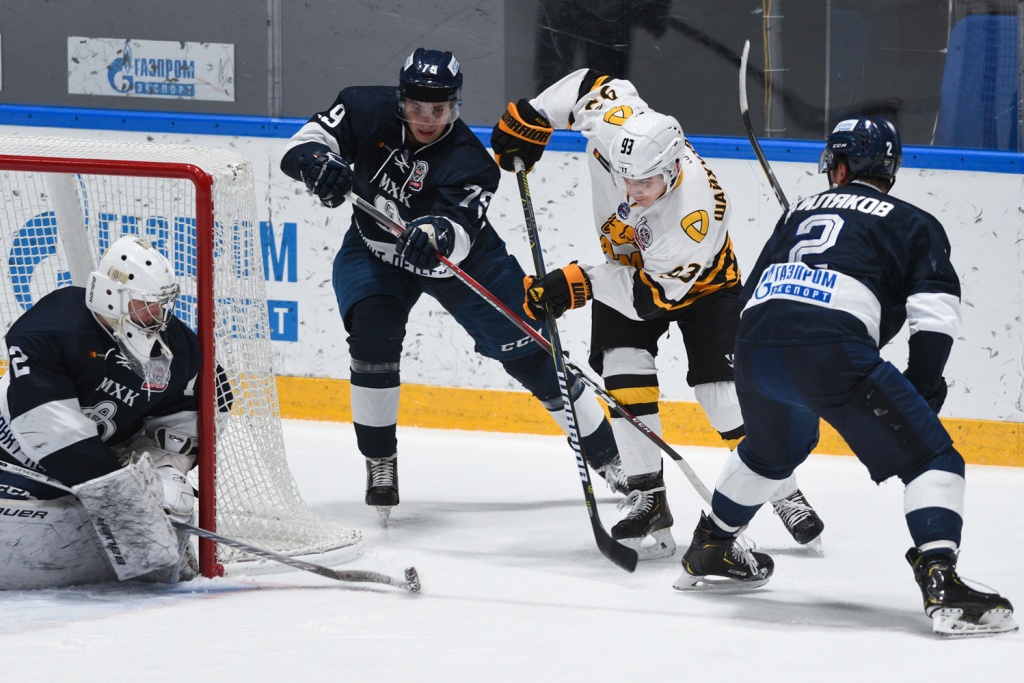 Today the teams were reluctant to opening scoring in the first period but in the game between JHC Dynamo St. Petersburg and Almaz Cherepovets the first goal was scored way into the second frame. Alexander Zarubin found the back of the net as he beat Kirill Ustimenko, who returned to the cage in this one.

47 minutes in home team scored on a powerplay. Incidentally, it was no other but Zarubin who got the minor. However, he shouldn’t be too hard on himself for that as his team still went on to win. With ten minutes remaining to play in regulation Artyom Markov gave the visitors their second lead of the game and then Pavel Zhirnov put it in the bag with an empty-netter. Almaz win a hard-fought game 3-1 on the road. 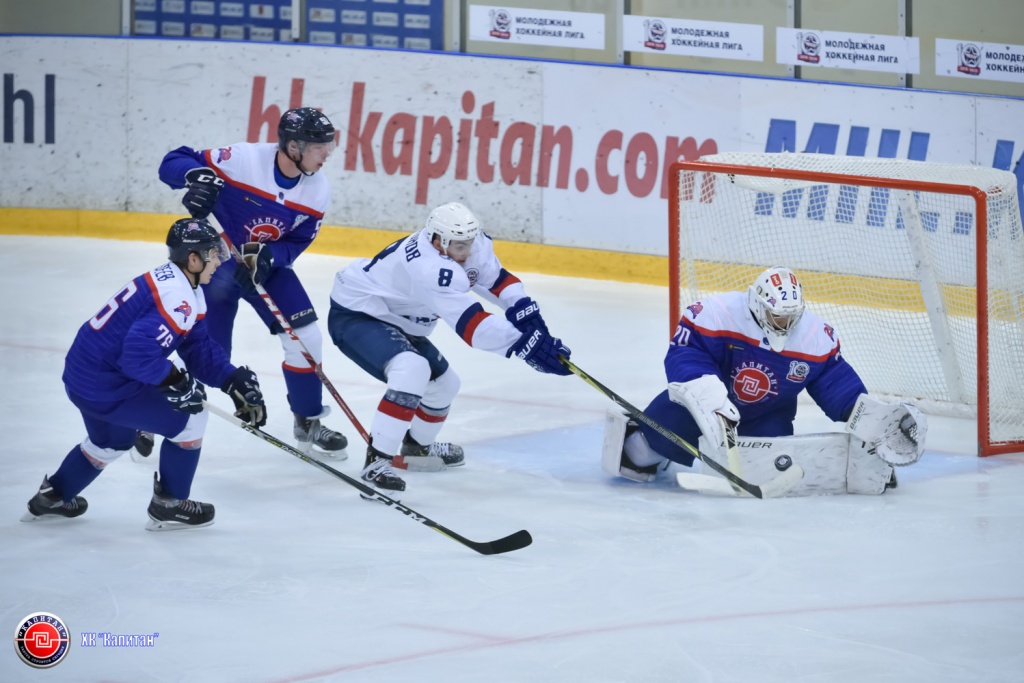 HC Kapitan Stupino defended the ice against Chayka Nizhny Novgorod and there was just one goal scored in the game. It came in the last minute of the second period. Nikita Tomilov won it for Nizhny Novgorod, while Danila Platonov and Donat Stalnov picked up the assists on the play. This was the first goal for the 18-year-old forward this season. Kirill Kozhokar stopped all 23 shots he had to face and earned his fifth career JHL shutout. 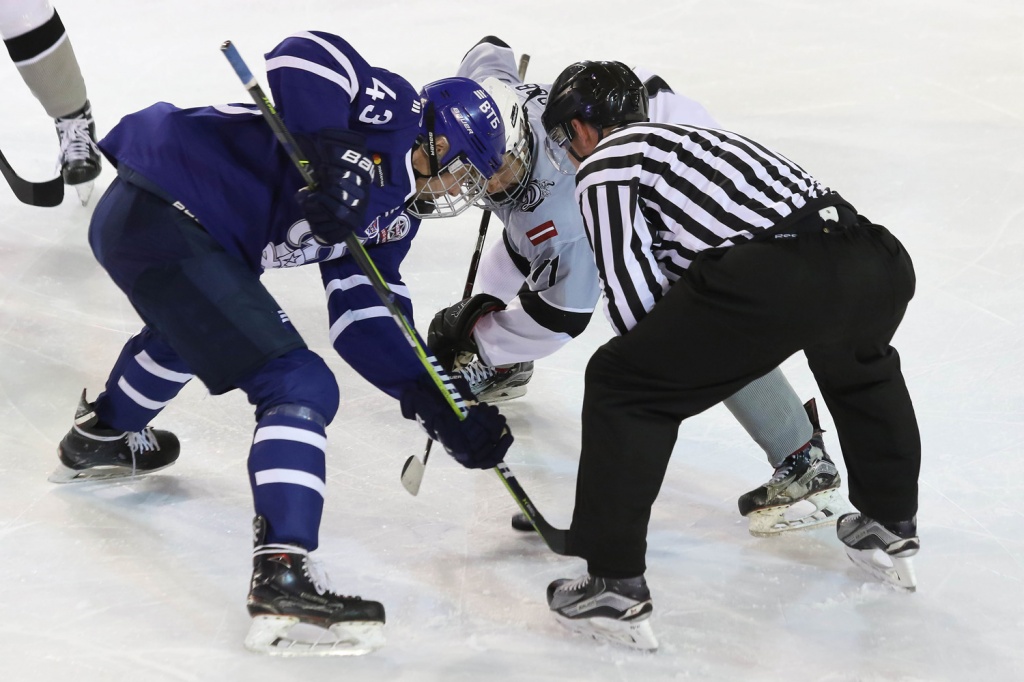 As for JHC Dynamo Moscow, they didn’t beat about the bush and opened up the scoring just 30 seconds into the game against HK Riga – Semyon Pankratov found his target with a powerful shot. Moscow also capitalized on their initial powerplay opportunity of the game – Vladislav Kazamanov got the marker. After that Latvian team called timeout and replaced Arturs Šilovs by Bruno Bruveris in goal.

That didn’t help them much as home team scored three more goals in the second period. Kazamanov got his second of the game, while Andrei Shirovchenko and Yegor Bryzgalov got a tally each. HK Riga managed to eke out a consolation goal – Arvils Bergmanis converted on a powerplay. That didn’t change anything in the big picture as Denis Tolpegin set the final score at 6-1 in Dynamo’s favor. 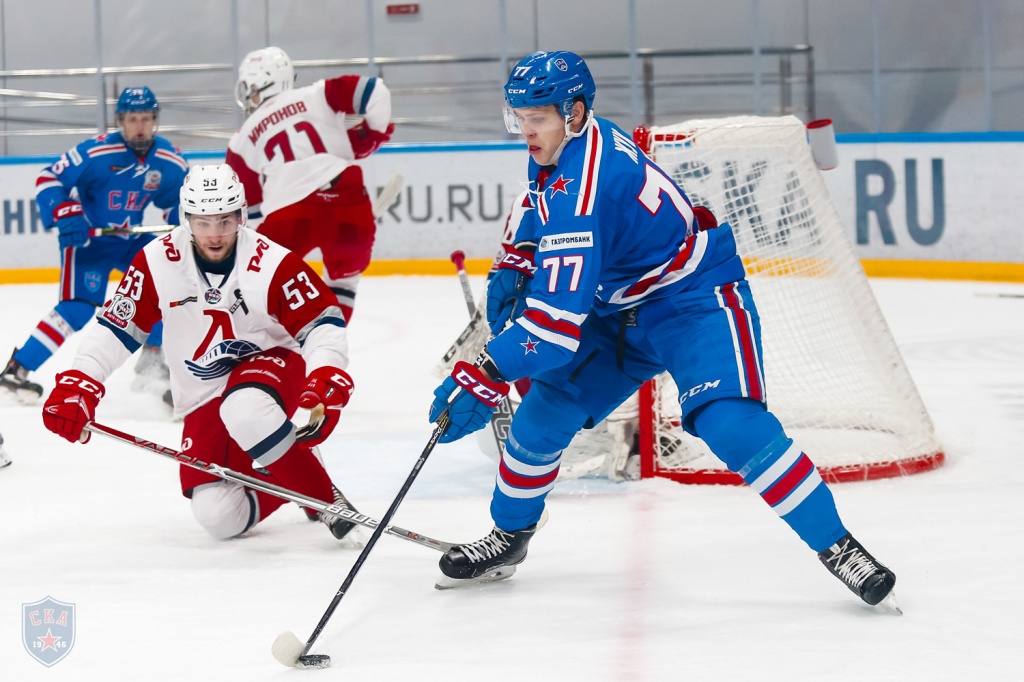 Last game of the day featured a matchup between the finalists of the previous season. It was at SKA-1946’s home ice in St. Petersburg that Loko Yaroslavl won their second Kharlamov Cup in franchise history. Rosters of both teams boasted quite a few players, who had played in that game.

Nevertheless, this time it was the ‘army men’ who walked away victorious, even though the visitors opened up the scoring just a few minutes into the second period – Daniil Misyul joined the rush and beat Nikita Lysenkov. SKA-1946 got back even as Vasily Podkolzin netted a beaut, skating to the middle and wristing it home.

33 minutes in Ivan Morozov beat Daniil Isayev again with a shot from a tough angle. Late in the second frame Misyul and Artyom Zhuk dropped the gloves. As for the goals, only the home team was filling the net. Daniil Barinov scored on the rebound as Daniil Arefeyev took the initial shot, and Dmitry Ovechkin set the final score at 4-1 in favor of SKA-1946.