HV71
News
“I STILL CAN’T QUITE GET MY HEAD AROUND THE FACT I PLAYED IN A KHL GAME”. 13 KRASNAYA ARMIYA PLAYERS LACED THEM UP FOR CSKA
“MY TEAMMATES OFFERED TO RENAME THE MOVE AFTER ME”. HK RIGA PLAYER SCORES A BEAUTY
“WE WERE KIDS WHEN WE FIRST PLAYED TOGETHER”. JUNIOR HOCKEY LEAGUE TOP-SCORER SHARES HIS LINE’S SECRETS
“I DREAM TO RETIRE ON A HIGH NOTE – WITH ANOTHER KHARLAMOV CUP”. QUOTES FROM LAST WEEK’S TOP PLAYERS
“I COULD HAVE SCORED FOR TEAM RUSSIA BUT I COULDN’T CAPITALIZE ON MY CHANCES”. NIKITA LUKHOVSKOY OPENS UP ABOUT HIS DEBUT FOR OLYMPIC TEAM RUSSIA
TYUMENSKY LEGION FORWARD COPIED DATSYUK’S SHOOTOUT MOVE. HOW DID HE PULL IT OFF?
NOVRUZOV SCORED A HAT-TRICK AGAINST AMURSKIE TIGRY AND HE’S AWESOME OFF THE ICE AS WELL. HE PERSONALLY KNOWS PLYUSCHENKO AND LEARNS SPANISH
NOVRUZOV SCORES A HAT-TRICK, SILANTYEV POTS TWO SHORTHANDED, SPARTAK TOP AMURSKIE TIGRY AGAIN. FEBRUARY 12TH ROUND-UP
Junior Club World Cup
JCWC TEAMS. HV71
Share

8th annual Junior Club World Cup will kick off in Sochi on August 18th. Junior Hockey League presents the participants of the tournament. Today we’re going to talk about HV71 Jönköping from Sweden.

HV71 is the name for both professional and major junior teams from the city of Jönköping. Jonas Holmström is the head-coach of the junior team. 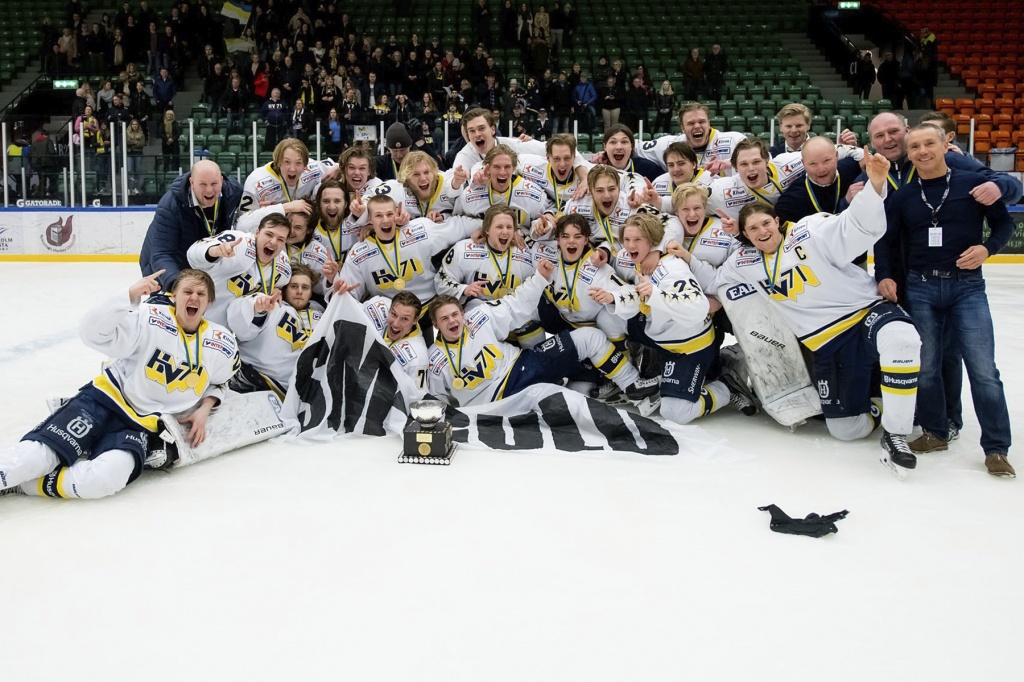 HV71 hockey club was founded in 1971 as a merger between two teams – Huskvarna and Vätterstads IF. The club first entered the top Swedish league, Elitserien, in 1979 was soon relegated. They won promotion again in the 1985-86 season and have remained in the top division ever since.

In 1995 the team won their first Swedish national championship title with a dramatic overtime-winner in Game 5 of the final series against Brynäs. Johan Lindbom scored the series-clinching goal, while goaltender Boo Ahl put on incredible performance in the playoffs. Since then HV71 have won four more Swedish national championship titles – the latest came as recent as in the 2016-17 season. Notably, HV71 faced Brynäs in the finals again and clinched the series in deciding Game 7 with yet another overtime-winner. 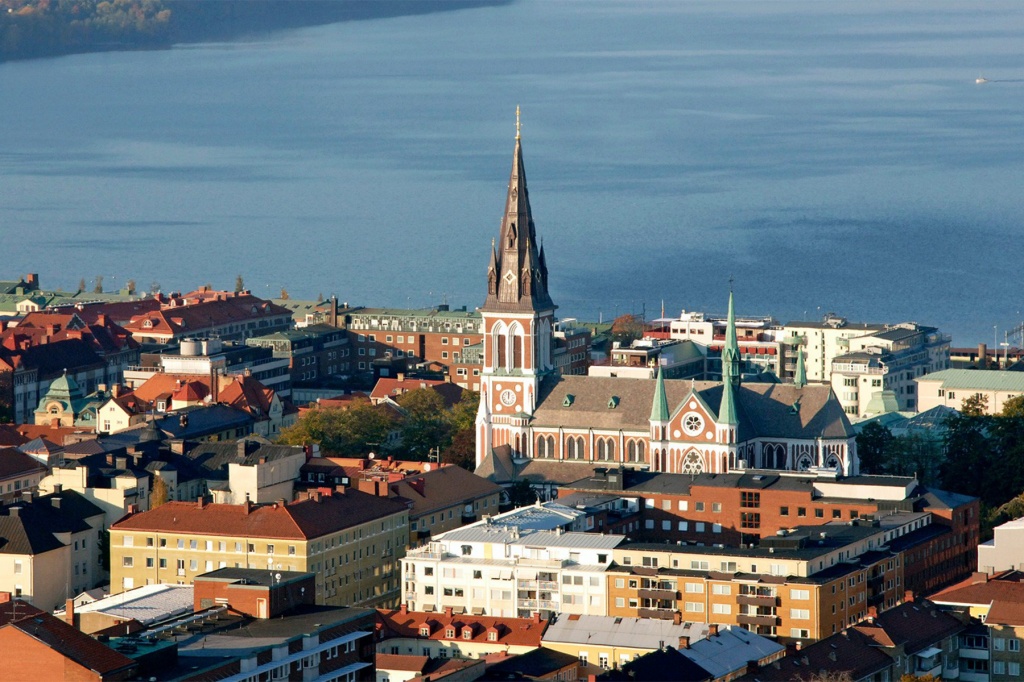 Jönköping is located in southern Sweden, at the south coast of Vättern Lake. It is one of the largest cities in historical province of Småland. Due to its location, the city has been a major trade center for a long time. In the 19th century it had developed bake goods trade, operational match factory and paper mill, as well as a harbour on Vättern Lake. Huskvarna district is located in the Eastern part of the city – it used to be a separate town until 1971. That’s where the beautiful armory and Swedish sewing-machine factory are located.

Moreover, ever since 1994 Jönköping has annually held one of the biggest cybersport championship DreamHack. 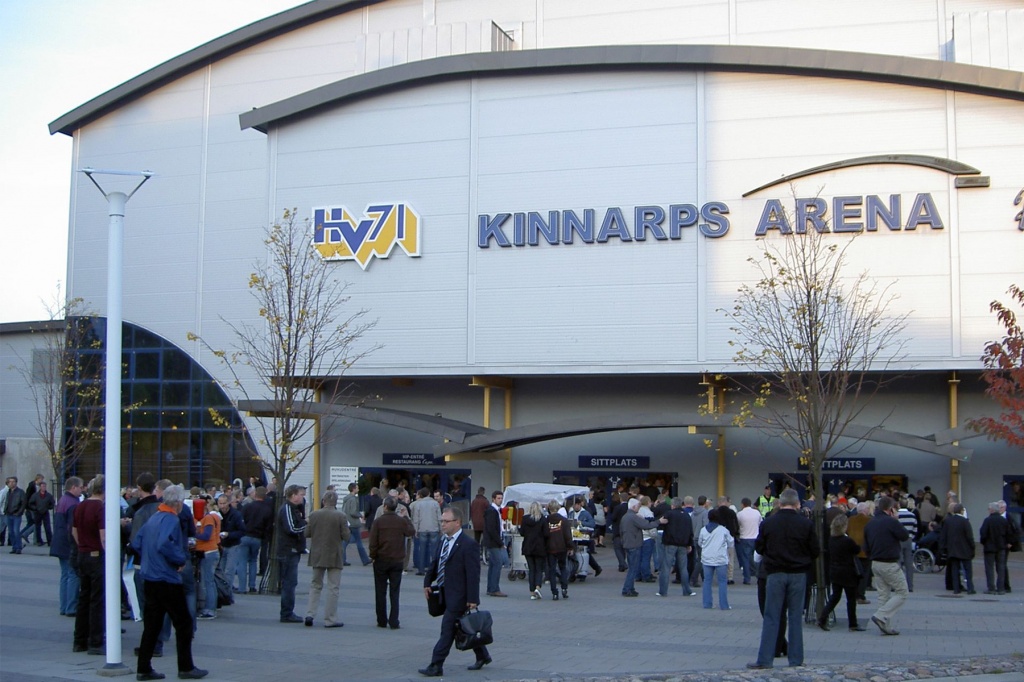 Since 2001 HV71 professional and major junior teams have played their home games Kinnarps Arena. The club owns the arena. Aside from hockey games, it also hosts many exhibitions, festivals and concerts. The arena has a capacity for 7,038 fans.

The club’s first home arena was Rosenlundshallen. It was the first artificial ice arena in Sweden. It was built in 1958. 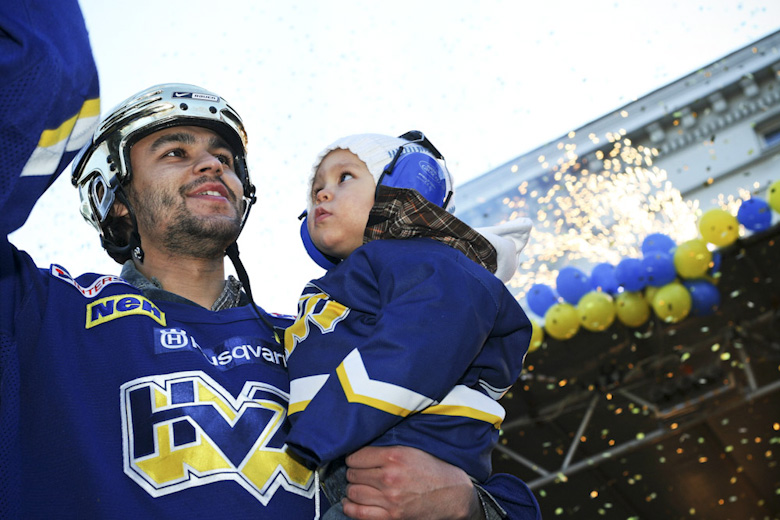 Goaltender Stefan Liv is among most famous alumni of the team. He was Olympic and world champion. He also won 3 national championship titles in Sweden. In September 2011 Liv passed away in tragic air catastrophe with Lokomotiv Yaroslavl.

Fredrik Stillman is one of the club’s legends and a Jönköping native. As a member of Team Sweden he won Olympic goal and two more gold medals at IIHF World Championship. He also wo national championship title with his hometown team. After retiring, Stillman worked as assistant coach on the team and then was HV71 general manager for a long time. In 2015 he moved to Vladivostok where he was on Admiral’s coaching staff for three seasons before landing the head-coach position with the team in the 2017-18 season. After he was fired from Admiral, he moved to Torpedo Nizhny Novgorod coaching staff.