LOKO BEAT SKA-1946 AND RETAKE THE LEAD IN THE FINALS 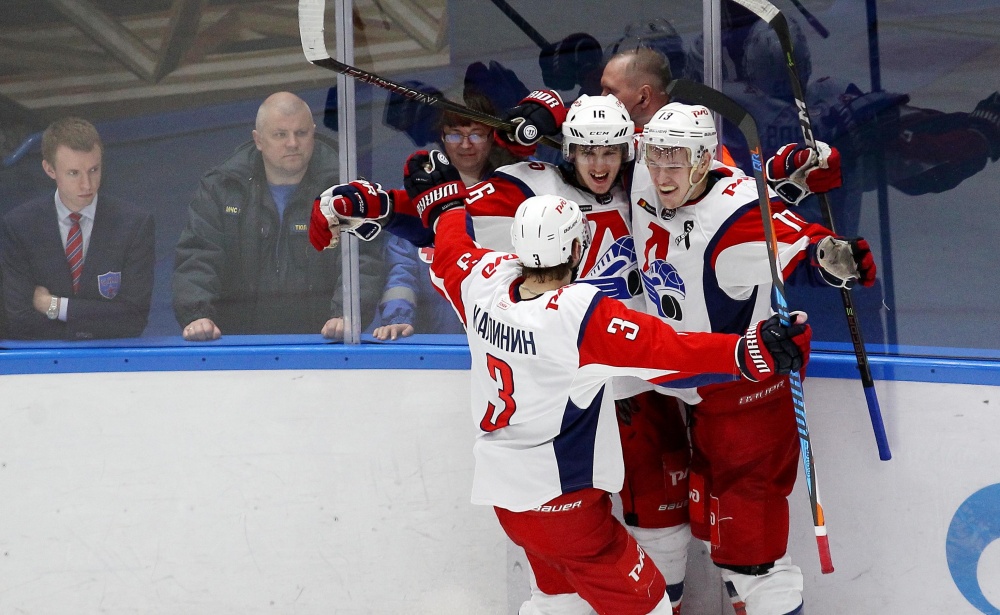 2018 Kharlamov Cup Finals Game 3 took place on April 18th. SKA-1946 hosted Loko Yaroslavl in St. Petersburg as the teams were tied 1-1. Yaroslavl gave up a 2-goal lead but managed to score the game-winning goal in the 3rd period.

After a short excursion about the Northern Capital, Kharlamov Cup made its way to SC Hockey Town, where it’s going to stay for the next two days – in any case, the trophy was going to travel back to Yaroslavl as the series would last for at least three more games. 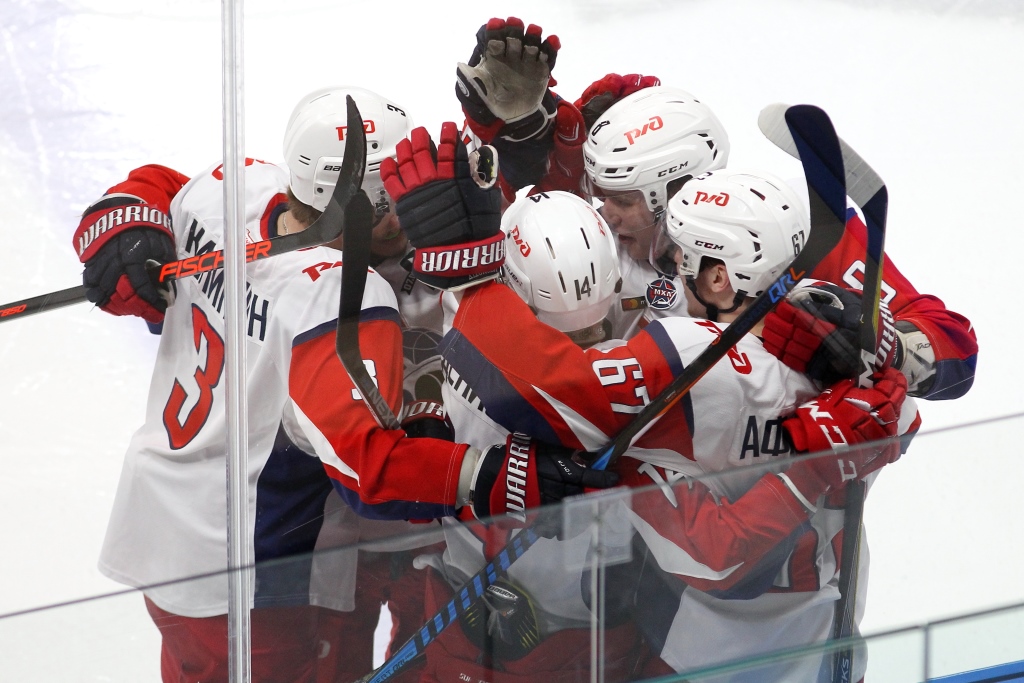 ‘Army men’ went back to starting Konstantin Volkov in net, while Loko head-coach Dmitry Krasotkin once again gave the nod to Ilya Konovalov, who hasn’t missed a game in the final series yet. Yaroslavl opened up the scoring already at 2-13 – Grigory Denisenko received a wonderful behind-the-back pass from Igor Zenchikov and sniped it top-shelf on the glove-side. St. Petersburg rushed down the ice looking to bring it back to even and got more aggressive on the forecheck. ‘Railway men’ played smart defensively and made Volkov make a few huge saves. Kirill Basisty had an excellent scoring chance as he capitalized on SKA-1946’s defensive mistake, got in on a breakaway but failed to beat Konovalov. Late in the 1st period Loko struck again – Vladislav Rybakov, who leads Yaroslavl in goals, added another one to his collection. Rybakov found some open ice and skillfully fooled Volkov, beating him 5-hole. 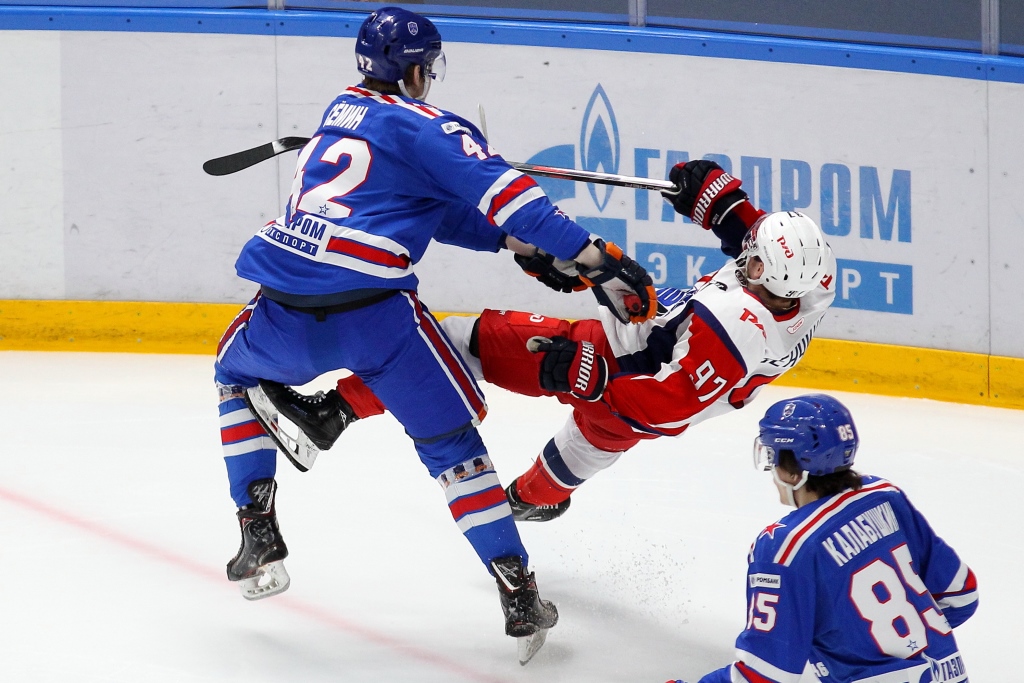 First penalty of the game came early in the 2nd frame – ‘the army men’ got the man-advantage. However, the visitors played as well defensively down a man as they were at full strength and SKA-1946 failed to create any real scoring chances. That was followed shortly by an unexpected pause – arena attendants had to replace the glass. Loko players survived another penalty after Grigory Denisenko had gotten a minor and went back to peppering Volkov from all over the ice. Loko also failed to convert on their first powerplay of the night, although Syomin got a 10-minute misconduct on top of his minor for checking to the head. But when Danil Gizatullin was sent off for a deuce, Yaroslavl almost scored shorthanded. St. Petersburg had the momentum late in the period. First Vladimir Vasiliev intercepted the puck at the far blue line, streaked down the left wing and sent it home from the slot. With two seconds remaining on the clock Loko gave up the biscuit behind their net and Kirill Petkov tied the game up as he sniped it with a nifty backhander. 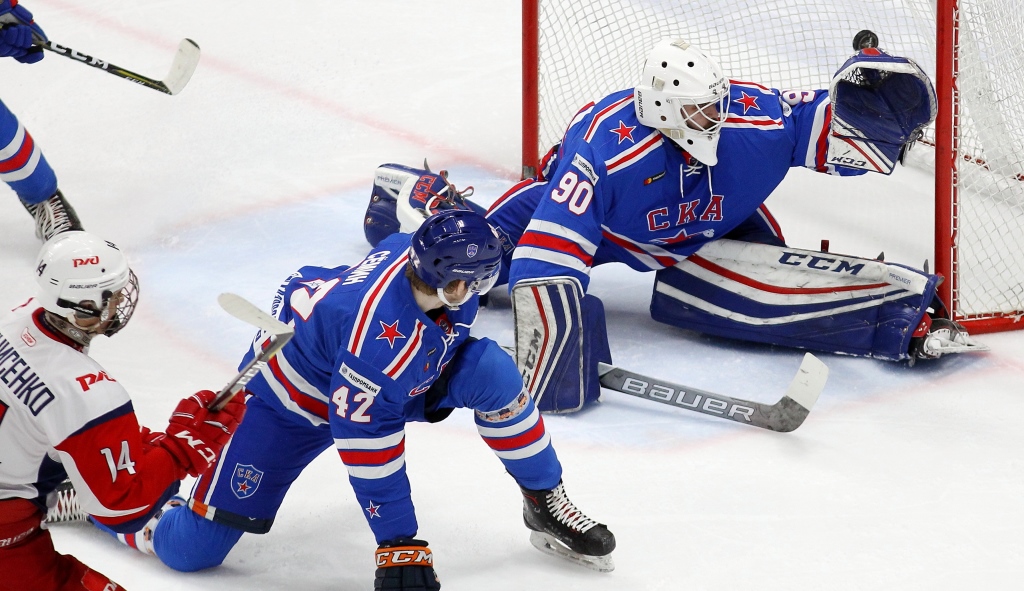 3rd stanza began with several offensive rushes by Yaroslavl, but SKA-1946, encouraged by their recent success, managed to pull through. Nevertheless, midway through the period the visitors grabbed the lead again. Alexander Polunin sent the puck up the left wing, Ivan Romanov decided to hold on to it, took a shot and he didn’t regret it. Luck was also on his side as Volkov got a piece of that shot but it still parachuted behind him into the net. Yaroslavl could have increased their lead but Nikolai Kovalenko didn’t convert on his breakaway chance. Daniil Ogirchuk got a minor penalty with less than a minute remaining to play in regulation, stripping SKA-1946 of chance to go for one final push. Loko went on to enjoy a 3-2 win on the road to retake the lead in the series.