Junior Hockey League Challenge Cup game took place in Astana, Kazakhstan and Team West got to hoist the coveted trophy as they won 7-3, improving their all-time lead against Team East to 7-2.

Due to extreme weather conditions the rink was far from being soldout but those fans who got through the blizzard had more than enough to entertain themselves with at the arena concourse, aside from the hockey game itself. As per tradition the fan-zone was rich in various activities. The fans could try out the power of their shot, test hockey virtual reality glasses, color a huge panno-picture and take a photo in All-Star Week official jersey.

JHL Challenge Cup opening ceremony was a beautiful sight. Pre-game show began with a video projection on jumbotron about the history of the rivalry West against East. After that the fans saw JHL galaxy unwrapping in front of their eyes. The Battle of East versus West was shown through two hockey players, who symbolized their respective conferences. On the ice they battled for the puck, which broke the ice and got shattered into 33 logos of JHL teams. Drumroll was cue for 33 players to hit the ice wearing jerseys of all JHL teams. They skated around in a star hurricane and their energy formed Team West and Team East logos.

After introduction of officials and players, it was time for the official part and special guests. Junior Hockey League managing director Alexei Morozov and Kazakhstan Ice Hockey Federation president Askar Mamin took the stage. Having said a few greeting words, they participated in a ceremonial puckdrop.

There were no stoppages of play in the first couple of minutes but there was lots of chaos – the players were affected by nervousness and responsibility. Mamonty Yugry goaltender Pavel Nechistovsky had to make the first save of the game – SKA-1946’s Evgeny Tsaryuk and Atlanty’s Pavel Pravilo gave some work to do to this regular season’s top netminder. Soon after that the fans got to see the opening goal of the game – top JHL scorer Pavel Kruty found the back of the net, while Igor Geraskin and Ilya Talaluyev picked up the assists. Team East rushed down the ice looking for an equalizer and accomplished that mission soon enough – Sputnik Almetyevsk’s Mikhail Shabanov found himself in the right place at the right time and buried the rebound past Kirill Ustimenko. Team West failed to capitalize on their initial powerplay of the night but scored in even strength – Khabarovsk’s German Voloshin sniped it just inside the crossbar. Mikhail Milyokhin’s men had another great scoring chance before the intermission, but Vladimir Mikhasyonok of Krylia Sovetov Moscow couldn’t make it in time to the puck, which was sitting right on the goal-line – Nechistovsky’s teammate Denis Yerkin came to rescue Team East.

Early in the 2nd period Team East tied the game up. Loko’s forward Nikolai Kovalenko got a minor penalty and just a few seconds into the ensuing powerplay captain Yegor Korobkin sent a dart past Ustimenko. Kovalenko made up for that right away as he scored a shorthanded goal, giving Team West their 3rd lead of the game. At 29-12 Igor Geraskin got his 2nd point of the night as he tipped Evgeny Kalabushkin’s shot home. After that the coaches swapped their goaltenders as they normally do at these games. Krasnaya Armiya netminder and reigning Kharlamov Cup champion Artyom Korepanov got in the cage for Team West, while Andrei Katyukhin replaced Nechistovsky in Team East goal. Notably, Katyukhin made his 2nd appearance at JHL Challenge Cup. Unfortunately for Novokuznetsk netminder, Igor Geraskin heated up for Team West – Almaz forward scored another goal off a great individual effort.

Team East came out swinging for the 3rd stanza, but Dmitry Stulov’s men were failing to convert on the scoring chances they were creating. At the same time, another rush to Katyukhin’s net ended with a Team West 6th goal of the game. Evgeny Tsaryuk poked the puck past the goaltender in the chaos in front of the net. Midway through the period Team East got a 4-on-3 powerplay for almost a minute but couldn’t capitalize on that chance either. At 53-25 Team West got in on a 3-on-2 rush, Katyukhin stopped Pavel Pravilo’s initial shot but Artyom Chernov got the rebound right on the blade of his stick and JHC Dynamo St. Petersburg forward put it into the yawning net. Although, home team sweetened the pill a little bit as they had the last word in this one. While shorthanded, they managed to steal the puck and Ildar Abdeyev caught Korepanov off guard to set the final score. Team West enjoy a blowout 7-3 win in Astana. 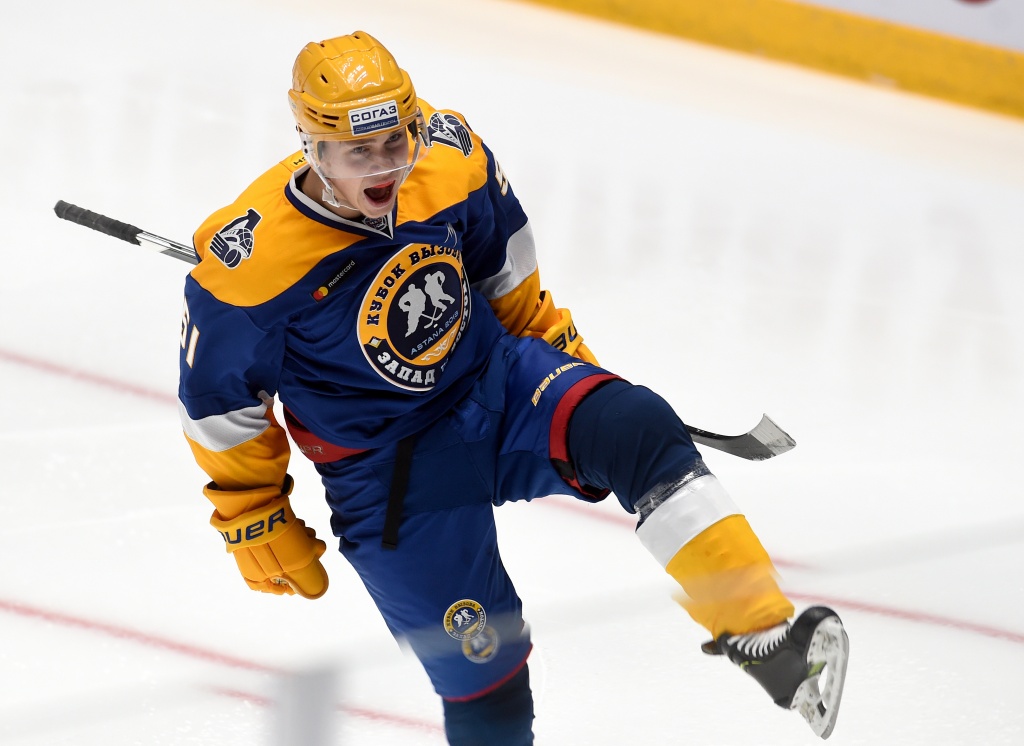 “It was a good game,” said Loko and Team West forward Nikolai Kovalenko. “The most important thing is that we battled for our team and got the win in the end. It was a very important game, we fought every second and deservedly won. It took us a while to got it going, we lacked chemistry in the opening period but it wasn’t much of a problem and we got the job done. As for coaching missions, it’s a secret but I hope we did what we were told. We overplayed our shifts a little bit but the coaches didn’t seem to mind it. I’m very excited to be selected for KHL All-Star Game, I didn’t expect it at all. Winning with my team is the most important thing to me, I’m very proud to have played with these guys. Many of them have some KHL experience so I have something to learn from them. Right now I’m not so sure how can I surprise the fans in front of all those stars (smiles). I’m going to learn from them. After all, my career is just beginning, while they are the true professionals.” 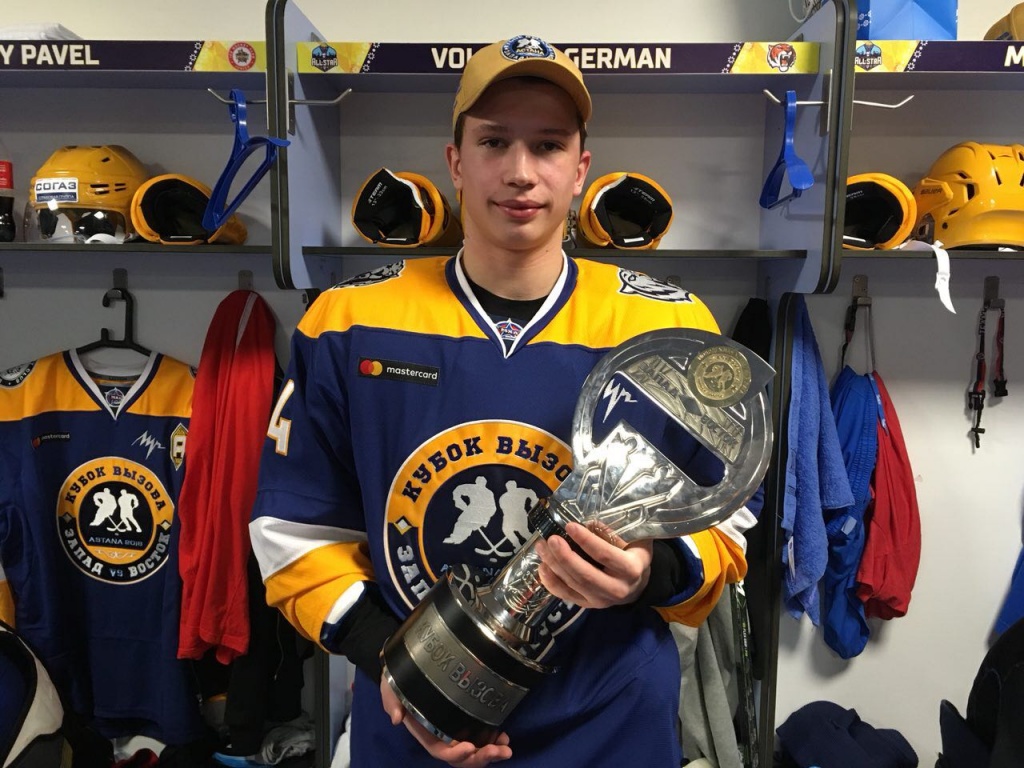 “The game went almost ideally for us,” Amurskie Tigry and Team West forward German Voloshin. “We got a comfy final score but most importantly – we won. Our goal right from the beginning was to play aggressively. We tried to follow that and that got us such a result. I’m very excited about being selected to play at the KHL All-Star Game. I had luck on my side, but, obviously, I’ve also put a lot of work into it. I didn’t believe or expected it right till the final minute. I’m a little nervous about the upcoming game because it’s going to feature the top players. It’s going to be my first time so I don’t really know what to expect. In any case, I’m going to do my best to get the most out of the experience. Today was the best day of my career. It’s an honor just to be here, be part of the team and take in the atmosphere. It was my first Challenge Cup and it gave me unforgettable emotions.”

“Everybody did their best today but we should have done better and that’s why we lost,” says Stalnye Lisy and Team East forward Yegor Korobkin. “We could have won the game had we shown character and played more aggressively but we didn’t. This game was a huge experience for me and it was very emotional. I’m a little shook up right now but having participated in this game I understand now that I have to keep on working and getting better. As the score suggests, I failed to to do my job as a captain. Perhaps, I should have cheered the guys up better and scored more goals. As for the team, the guys were all very friendly, we got close in the past few days and we’ll stay in touch. We’ll see each other again in the KHL.

“In the upcoming All-Star Game I don’t even know what to expect. When they announced my name, I thought they made a mistake, because I thought they would pick only Team West players. I’m very nervous about it. I don’t know what to do there at all. I’m going to wrap my mind around it. I watched many All-Star Games but I’ve never thought that I would participate in one. Well, if worse comes to worst, the guys are going to cheer me up!”

“Great organization, excellent city – it’s a pity I didn’t have a chance to walk around it due to bad weather,” Almaz Cherepovets and Team West forward Igor Geraskin. “Today we capitalized on our chances, played well defensively, our goaltenders did well when they needed. We were kind of feeling each other out in the opening shift because we faced players from the Eastern Conference for the first time. That’s why we were a little nervous in the first couple of shifts. But then it went away and we began scoring. It was an important game, everybody played to win because everybody wanted to make it to KHL All-Star Game. You could see yourself how many brawls we had tonight and how many penalties were given out – nobody wanted to give anybody even an inch.

“I’m very excited about the upcoming All-Star game. Of course, I wanted to be selected but I’d come here to help my team win. Hopefully, I’m going to have a great time and maybe learn a thing or two. The atmosphere is going to be great. I watch All-Star games every year, it’s always a lot of fun. Now I get to be right in the midst of it!”