2017 Junior Club World Cup will take off on August 19th in Yekaterinburg and Verkhnyaya Pyshma. As of today we begin introducing you to the participating teams, starting with 2-time and reigning Kharlamov Cup champions Krasnaya Armiya Moscow. 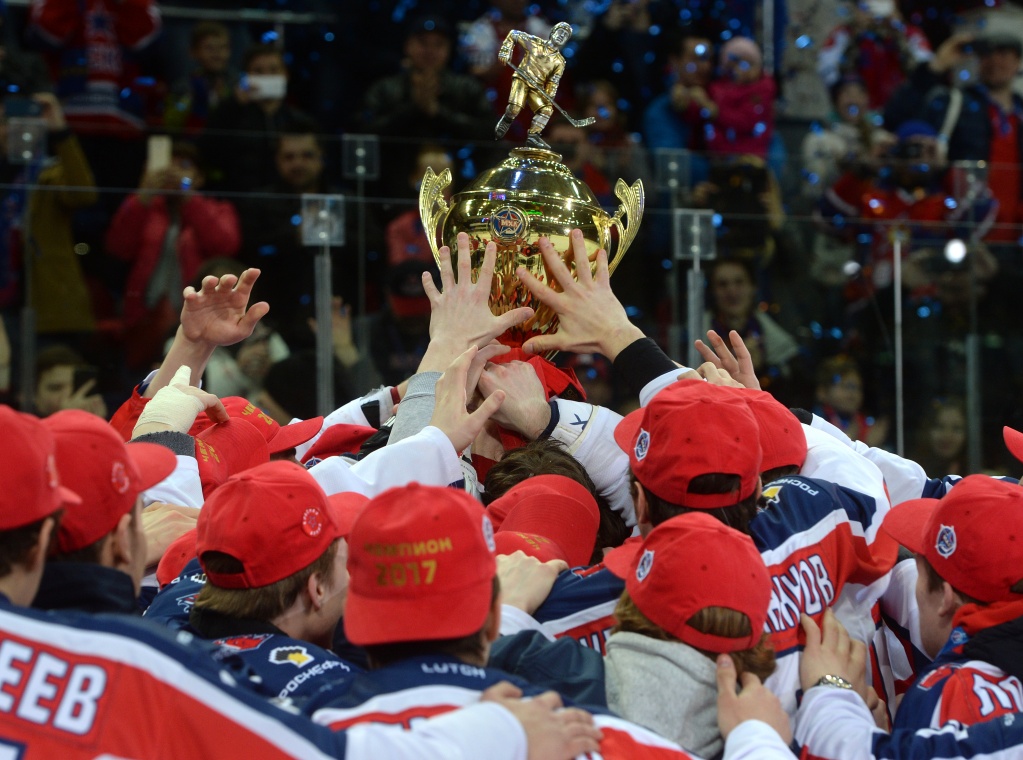 CSKA pay a lot of attention to their alumni. Their hockey school is traditionally regarded as one of the best in the country and their junior hockey school alumni consistently go all the way up to play for CSKA professional team.

It doesn’t come as a surprise that CSKA management was more than happy when the JHL first started. There was a quite a big debate on about what their major junior team should be named. As a result, in their debut season the team was called CSKA-Krasnaya Armiya. Under that name the red-and-blue came out for the league’s first official game. At CSKA Ice Palace on September 4th, 2009 ‘the army men’ took on Dynamo Moscow. Andrei Parfyonov’s men lost the game 6-4 but just two days later they got an outstanding revenge by the score of 7-3.

Forwards like Nikita Kucherov, Nikita Gusev, Mikhail Plotnikov, Alexander Torchenyuk and many others made a name for themselves in JHL’s inaugural season. Defenseman Alexei Marchenko made his CSKA debut when he was just 17 years old.

After getting eliminated in the opening round of the playoffs, ‘the army men’ regrouped, dropped the CSKA part from their name, had a busy season under head-coach Vyacheslav Butsayev’s command and began demolishing their opposition right from the get-go. Having won 10 games in a row, the red-and-blue soared to the top of the standings in Central Division and held it till the end of the regular season. In the following Kharlamov Cup Playoffs Krasnaya Armiya were second to none. In the final series they left no chance to then reigning champions Stalnye Lisy Magnitogorsk.

Krasnaya Armiya went on to further improve their success in Omsk as they won the first ever Junior Club World Cup championship title. In the final game the Russian team beat Czech Energie Karlovy Vary 7-2. The culmination of that success came when then Krasnaya Armiya captain Roman Lyubimov hoisted the new trophy and the red-and-blue celebrated triumphantly.

If you look at Junior Hockey League history, Krasnaya Armiya has every right to be considered as the league’s most consistent team. They had just one ‘off-season’ back in 2012-13 when the team didn’t make the playoffs. On the way to second Kharlamov Cup in franchise history, the red-and-blue played twice in the finals. A year after winning their first cup, Krasnaya Armiya lost to Omskie Yastreby and in the 2013-14 season they faced MHC Spartak Moscow in what turned out to be one of the most exciting and hard-nosed battles in JHL history. The series went on for seven games and it was the red-and-white who got to hoist the cup at CSKA Ice Palace.

Two years later Krasnaya Armiya finally achieved their goal. Boris Mironov, who was making his debut as head-coach, enjoyed a wonderful regular season and then lost just two games in the playoffs – notably, both in the opening round. Krasnaya Armiya have won 12 consecutive playoff games and there’s a good chance they will build on that next season.

Nikita Kucherov selected in the second round of the 2011 NHL Entry Draft by the Tampa Bay Lightning. 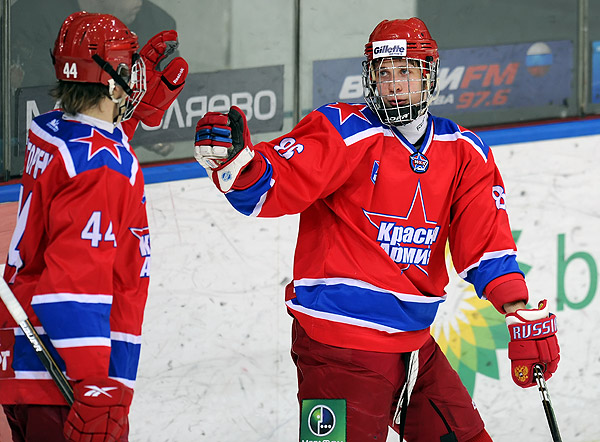 Funnily enough it happened by a pure mistake as Tampa Bay general manager Steve Yzerman mixed up Nikita Kucherov with Nikita Nesterov, who the club also drafted later. The mix-up led Kucherov to become one of Tampa Bay top players. Last season he especially exceled as he scored 85 points in 74 regular season games and added 19 more in 17 playoffs games. 23-year-old Kucherov won silver and bronze medals at U18 IIHF World Championship, bronze medal at World Juniors and another bronze at the most recent IIHF World Championship.

Another Lightning prospect Nikita Gusev so far prefers to spend his career in Russia and he has already won the Gagarin Cup with SKA St. Petersburg. 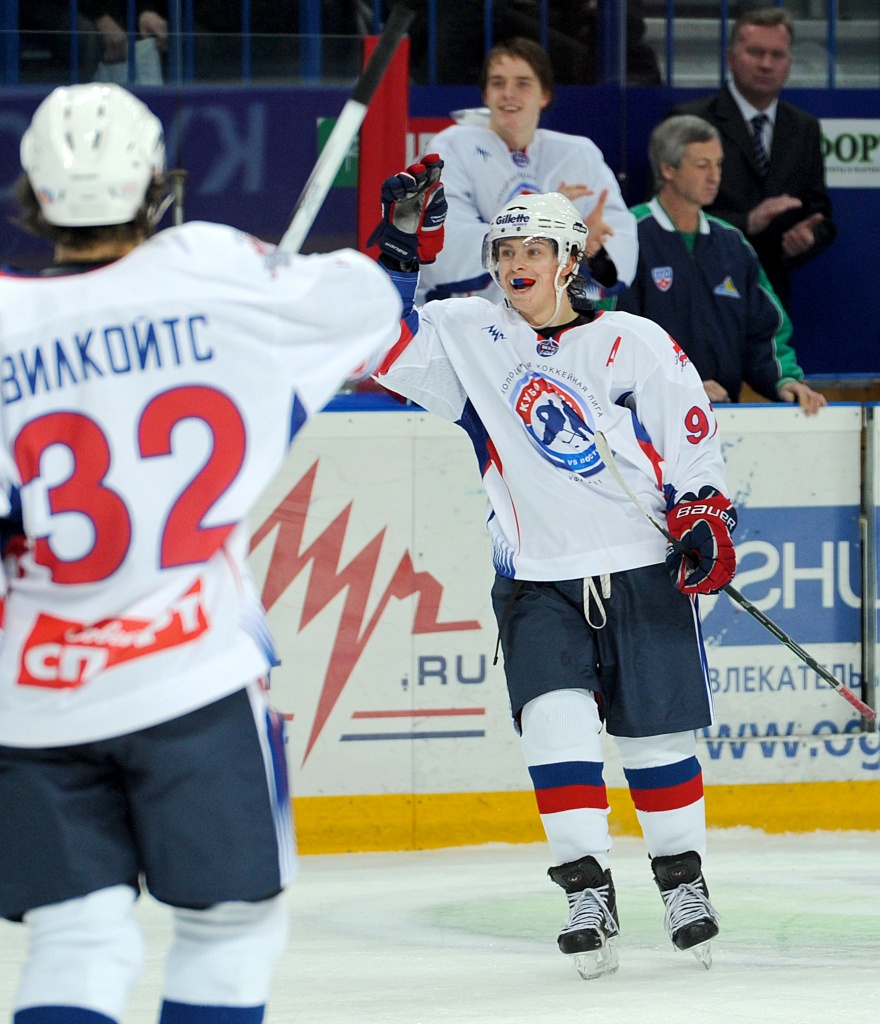 Gusev is one of the best players in Junior Hockey League history. He led the league in points and goals twice and once in assists. He was named Most Valuable Player of Kharlamov Cup Playoffs twice. On top of that Gusev won silver medal at World Juniors, bronze medal at IIHF World Championship that was co-hosted by Cologne, Germany and Paris, France, won Kharlamov Cup, was selected to play at KHL All-Star Game twice and competed for JHL Challenge Cup three times. 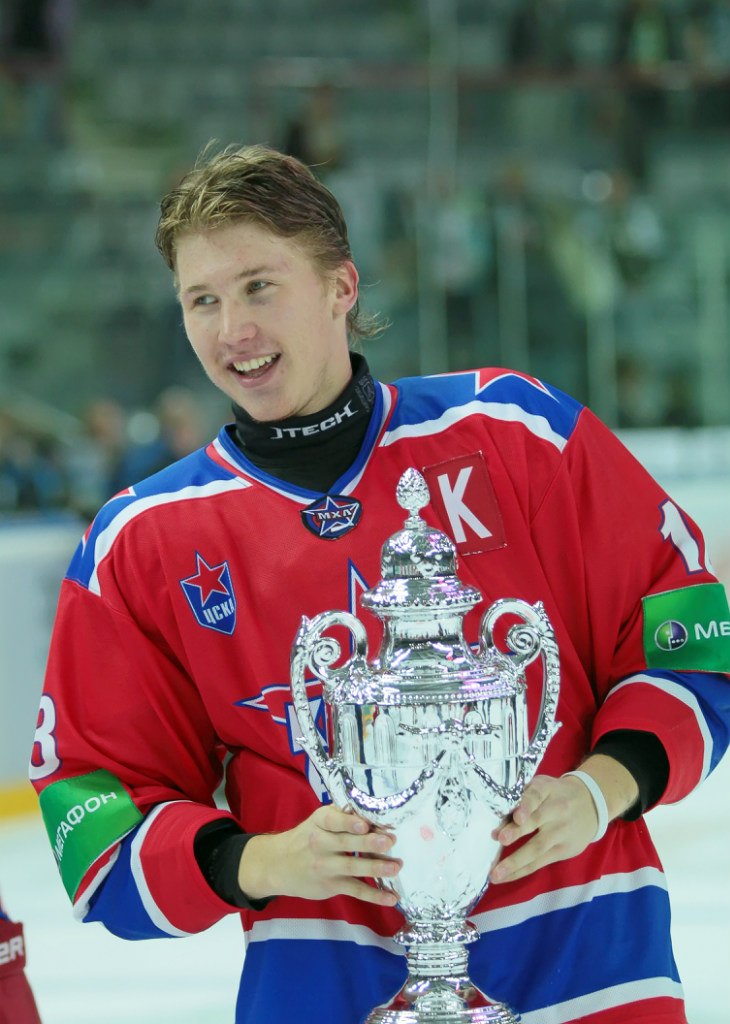 In his sophomore JHL season Roman Lyubimov led Krasnaya Armiya to Kharlamov Cup, scoring 29 goals and notching 27 assists for 56 points in 65 games. Moreover, on October 3rd, 2010 Lyubimov made his debut in the Kontinental Hockey League in the game against Barys Astana. Lyubimov played for Team Russia at the 2010 U18 IIHF World Championship and finished fourth. At the 2016 IIHF World Championship he won a bronze medal with Team Russia. On July 11th, 2016 Lyubimov signed a 1-year deal with the Philadelphia Flyers. He played 47 games and scored six points. In the 2017-18 season Lyubimov decided to come back to Russia and once again joined CSKA.