SKA-1946
News
“I am of the same “slow ship” style as my father.” Maxim Mayorov – about moving to Yaroslavl, national team debut and passion for tennis
“I bought a cake and gave flowers to my mom with my first paycheck.” Yaroslav Tsulygin – about his JHL debut with Tolpar
Was signed up for hockey at the age of three, was dressed as a goalie in an extreme situation and looks up to Datsyuk: take a closer look at the leader of Irbis and the hope of Ak Bars
Edgar Varagyan: “When we were on the plane, guys told me: “He is an enforcer, he would beat you up with no sweat.” I thought: things happen, he would beat me up and so what?”
“As time goes by, taking a flight to Sakhalin feels almost like being stuck in Moscow traffic.” Daniil Veremeichik – the JHL's Best Player on Social Media
“Working out in a gym is a type of rest for me.” Ivan Murashov had the best season of his career, dreams of playing in the KHL and has not eaten any fast food for two years
“Condensed milk is the only unhealthy food available for the national team.” Raul Yakupov – about the Black Sea Cup, the KHL debut and the season with Reaktor
“Four years in the JHL was a great time. Winning the Cup with Dynamo was the best moment.” Ivan Didkovsky about junior phase of his career
Share

SKA-1946 St. Petersburg alumnus Vladislav Valentsov had an eventful junior hockey career. He was called up to play for U18 Team Russia, went on tour with Team JHL “Red Stars” and participated at JHL Challenge Cup. He played 178 games in Junior Hockey League, scoring 15 goals and 30 assists for 45 points. He was also a plus-35. The defenseman will stay in SKA system for at least another year – very soon he’s going to be off to SKA-Neva pre-season camp. In this interview Valentsov spoke about key moments of his career and found out things he couldn’t achieve in his time in JHL.

“My parents brought me to a rink when I was four and a half years old. My mom got the idea at my kindergarten – someone told her to bring me there to see if I’d like it or not,” says Valentsov. “When they brought me there, at first I couldn’t understand what was going on and why was I brought there. I got on the ice, fell immediately, the coach came up to me and yelled: “Get up! Quit laying around!”. So I got up on my feet and just skated. The most memorable tournament of my childhood was Gazprom Neft Cup in 2007. Everything was the way the pros have it – the rink was packed for the opening ceremony. It was great to stand on the ice in front of that many people for the first time. Then we had a skill competition of sorts. They would pick several guys from every team and we would participate in different competitions on ice. They also held a huge dinner for all teams at the end of the tournament.”

- Why did you move from Gazovik to Neva?

- Our head-coach and his assistant left the team and new people took over. We had a misunderstanding. My buddy went to try out for Neva first. He made the team, called me and invited to come over as well. I talked about it with my dad and decided to go, too. They told me I could stay after try-out.


- You were drafted in 2013 and SKA took you early – you went 5th overall. How did you like the ceremony? Did you expect to be drafted so early?

- The draft was held in Donetsk at Druzhba Arena. There was a great show before the game and the rink was packed. Although, because of a problem at the customs a few guys couldn’t make it, so we were divided evenly. I found myself on Team East and we lost the game. I hadn’t spoken to any SKA representatives before the draft. I didn’t even think I would be picked so early. And I couldn’t imagine it would be SKA.

- In your rookie season you were called up a few times to U18 Team Russia. Did international tournaments change you as a player?

- Not really. Obviously, it was a certain experience but that’s about it. After these tournaments you become more consistent psychologically. After all, you represent your country at international stage. It’s a great responsibility.

- Did those call-ups to Team Russia prevent you from blossoming in your rookie season in Junior Hockey League?

- No. I think it was even good for me. The level of competition on Team Russia was very high and we never faced weak opponents.

- Next season you were selected to play for Team JHL “Red Stars” and went on tour to North America. How did you find out that you made the team?

- After one practice team manager announced that a few guys were to go to “Red Stars”. We had a short camp before the tournament to get used to each other.

- Viktor Kovalyonok was the head-coach of the team. Did it help in any way?

- Of course, because he coached SKA-1946 at the time. I was familiar with his demands so it was easy.

- What do you remember the most from that trip?

- Perhaps that we played in different towns. We were always on the road. It was great to play against student teams. We didn’t really have time to walk around the towns, though. So we didn’t see much. Although, we spent about half an hour at Times Square. 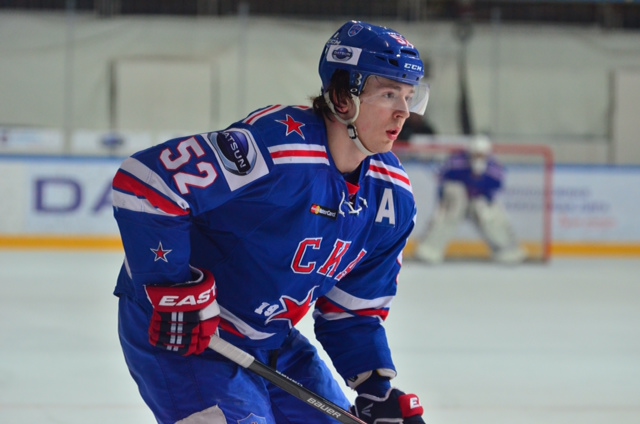 - Kovalyonok joined SKA-1946 midway through the season and later said in one of his interviews that when he first came to the team he noticed that all the players were uptight. How did Viktor Petrovich improve relationships within the team?

- I remember one of the first team meetings we had. We were in Latvia and he gathered us in the hotel lobby either before the game or after the game. He said: “Guys, don’t be afraid to make a mistake. Do what you’ve got to do. Learn. Because even if you make a mistake now, you can win the game for us next time. Don’t focus on mistakes. Learn from them and don’t blame each other.”

- You made it to the finals with him. Why couldn’t you beat Chayka Nizhny Novgorod? Why did they steamrolled over you in the first games of the series?

- Perhaps, we just weren’t ready. Chayka is a tough team to play against. They didn’t give us any room on the offense and played deep in our zone. And as soon as we would lose the puck, they would storm down the ice for a quick counter-attack. And it just so happened that they capitalized on all of their chances, while we didn’t.

- A season earlier Chayka got eliminated in the opening round and for four consecutive years before that they couldn’t even make the playoffs. Is it fair to say that they wanted to win the cup more than you?

- No, I don’t think so. Everybody wanted to win – them and us. Winning is what we play for. It’s just so happened that they won because of some details and nuances. There can only be one winner.

- It’s time to reflect on your time in Junior Hockey League. What is your take on that time?

- It was a very interesting time and it went by really fast. Although, it left me with some positives. I won JHL silver medal and JHL Challenge Cup, went on tour to America with ‘Red Stars’. I changed my views on hockey and life in certain regards, and learned a lot of new things. I became more responsible in getting ready for the games and analyzing the game. 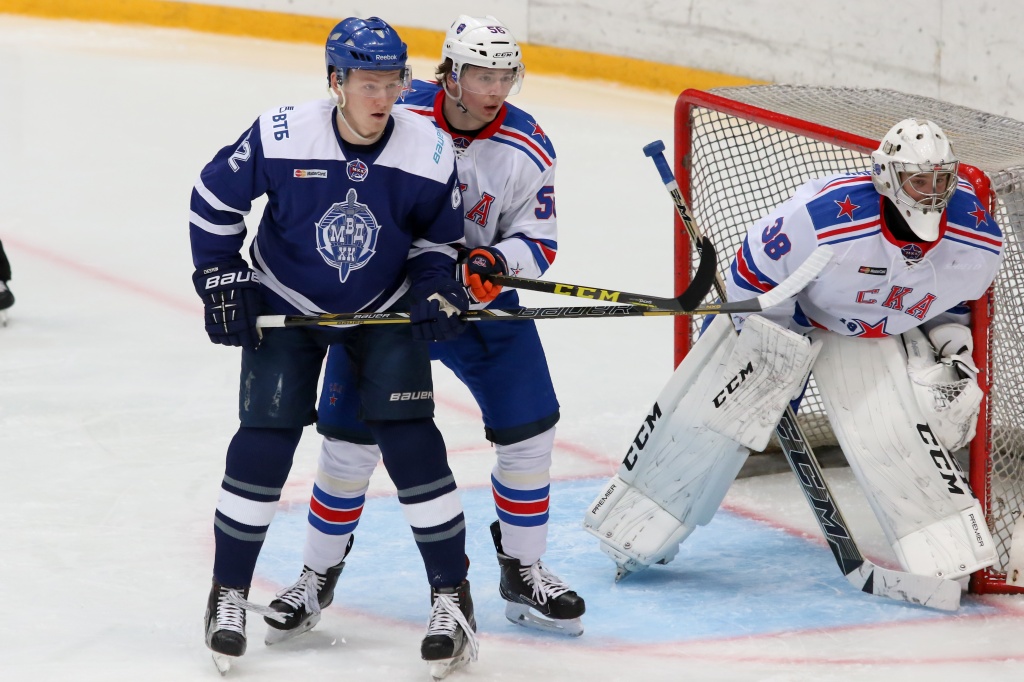 - Do you feel like you missed out on a few things?

- Last season Pyotr Iliych Vorobyov, when he was the head-coach of your team, said that you were an experienced defenseman and were ready to play for SKA-Neva. This season his words became a reality – under his command you made your VHL debut. How difficult was it to get to pro hockey level?

- At the end of last season I injured my arm pretty badly and it took me almost seven months to recover. It was difficult to get back in shape and I feel like I didn’t use my chances to full extent this year. Hopefully, next season is going to be better for me and the team.

- Did you work individually this off-season?

- No, I went to the hospital for procedures. It was almost like learning to operate my hand from scratch. 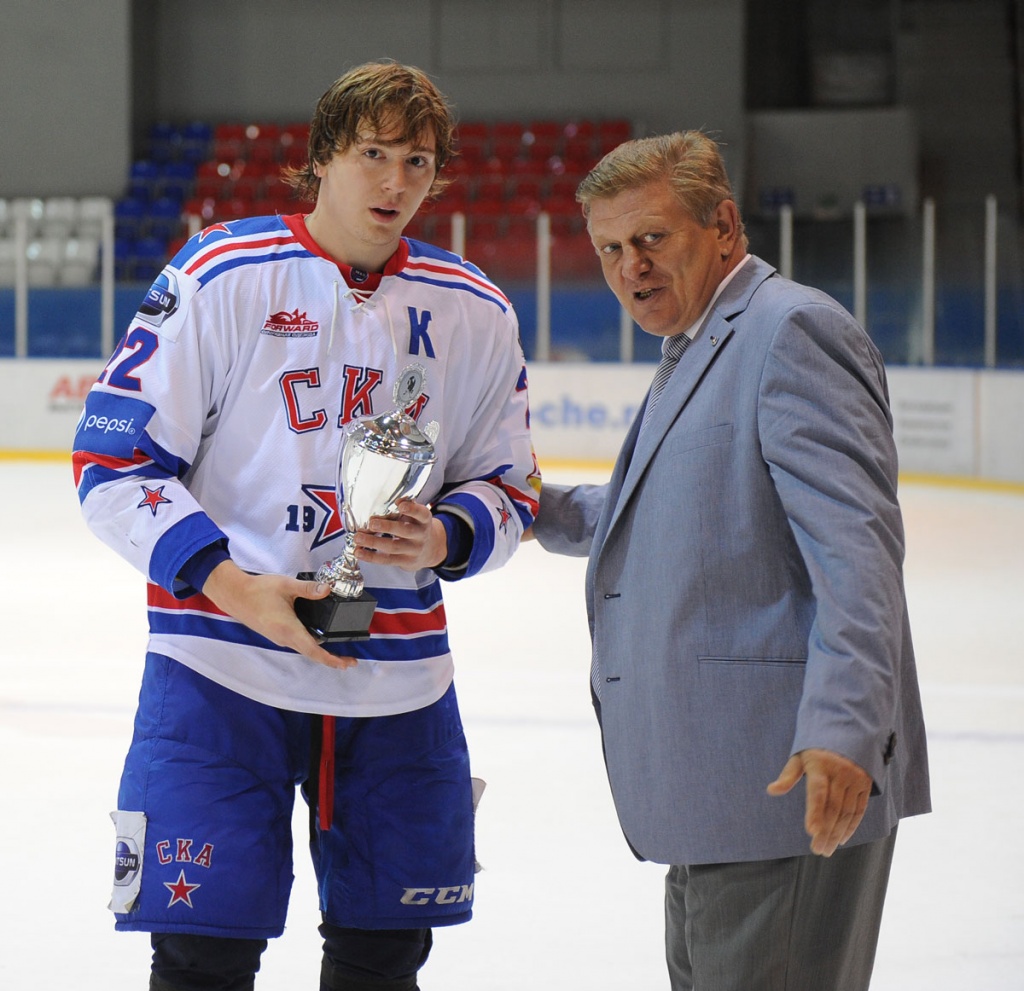 - Vorobyov said that the injury was very bad. “He had spikes and bolts, and he still has them…”. But he still gave you a chance to go to the next level. Do you feel like you lived up to his expectations?

- I don’t think it to the full extent. Obviously, he expected more out of me.

- You contract runs for another year. Are we going to see you next season on SKA-Neva? Have you begun getting ready for the season?

- Yes, I will play for SKA-Neva. I have my medical on July 2nd and then I’m off to camp. I have begun exercising a long time ago – I go to the gym and practice on ice. I work on individual program.

To be a hockey player means be responsible, play through hardships and achieve set goals.

I think every person is good in his own way. There are no ideal people because you can’t please everyone.

My life principles are to love and respect parents.

As for my defining features, I think I’m not the one to be asked. I am the way that I am and I’m not going to be anybody else.