SVETLANA VOVCHENKO: “I’M READY TO DO IT ALL OVER AGAIN” Almaz
News
“I am of the same “slow ship” style as my father.” Maxim Mayorov – about moving to Yaroslavl, national team debut and passion for tennis
“I bought a cake and gave flowers to my mom with my first paycheck.” Yaroslav Tsulygin – about his JHL debut with Tolpar
Was signed up for hockey at the age of three, was dressed as a goalie in an extreme situation and looks up to Datsyuk: take a closer look at the leader of Irbis and the hope of Ak Bars
Edgar Varagyan: “When we were on the plane, guys told me: “He is an enforcer, he would beat you up with no sweat.” I thought: things happen, he would beat me up and so what?”
“As time goes by, taking a flight to Sakhalin feels almost like being stuck in Moscow traffic.” Daniil Veremeichik – the JHL's Best Player on Social Media
“Working out in a gym is a type of rest for me.” Ivan Murashov had the best season of his career, dreams of playing in the KHL and has not eaten any fast food for two years
“Condensed milk is the only unhealthy food available for the national team.” Raul Yakupov – about the Black Sea Cup, the KHL debut and the season with Reaktor
“Four years in the JHL was a great time. Winning the Cup with Dynamo was the best moment.” Ivan Didkovsky about junior phase of his career
Share

SVETLANA VOVCHENKO: “I’M READY TO DO IT ALL OVER AGAIN”

Do you know that there was a chance hockey player Daniil Vovchenko wouldn’t be in Cherepovets? There very well might have been a soccer player by that name in the Steel City. All simply because soccer was the number one sport in Vovchenko family. Severstal forward’s grandfather used to play for Metallurg Cherepovets and he was the one who got Daniil into the sport. It wasn’t even the parent who brought little Daniil Vovchenko to hockey. It happened by chance.

“It all began with a game between Severstal and Ak Bars,” reminisces Svetlana Vovchenko, Daniil’s mother. “The game was in the spring on the eve of Daniil turning five years old. Our family was strolling by Almaz Ice Palace. I don’t know if it was destiny or chance that the most important and guiding in a way game was taking place that day. Moreover, we were lucky to get tickets – the game was soldout. We didn’t expect that game to turn our lives around like that. All you had to do was look into the child’s eyes and you knew it. Daniil followed the game closely and he was very excited. He didn’t get at first how to call the players so when they stepped on the ice he said – Mom, dad, Nikita, look at those robots, I want to be just like them.”

Since that day everything changed in Vovchenko family. Even though Daniil continued his sports gymnastics, which gave him physical conditions he would be very thankful for in the future, all he talked about at home was hockey. 5-year-old Daniil was tenacious and no matter how parents tried to talk him out of it, he made them sign him and his brother up for junior hockey school. But the mere will wasn’t enough to enroll, says Svetlana Valerievna. 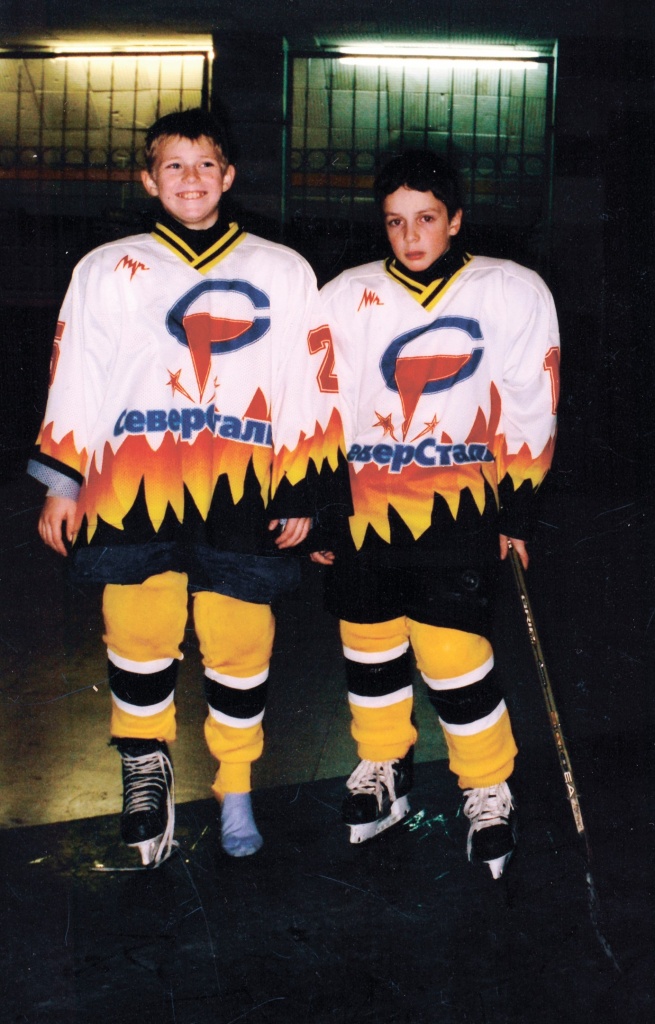 “We came to our first practice in September and we were told that our boy was way too small. He was five back then and they told us to wait till he turns seven,” she says. “I remember looking at my son and his eyes were full of desperation and tears. I just couldn’t take no for an answer. We told the coach we brought two of our sons and the older one, Nikita, was already seven. So we asked the coach to let Daniil participate at least in one practice along with his brother. Daniil put the skates on, stepped onto the ice and skated away by himself. The coach was surprised by that. He walked up to us and told us Daniil could stay. Vladimir Kochin was his coach for a while and then Daniil worked with Valery Falichev and Vladimir Leshko, who eventually opened the doors to hockey world for him.”


- Svetlana Valerievna, what was your relationship like with your son’s coach?

- Vladimir Valentinovich was born to coach. He’s very demanding but just. He’s always known how to find the right words for each and every one of his students back when they were in junior hockey school and even today. He always comes to help, he supports the boys through ups and downs of their sports life. He always gives good and precious advice; he knows everything about all of his alumni. Most importantly, he’s able to spot and develop talent, open up their souls, and bring them up as both – good people and great athletes. 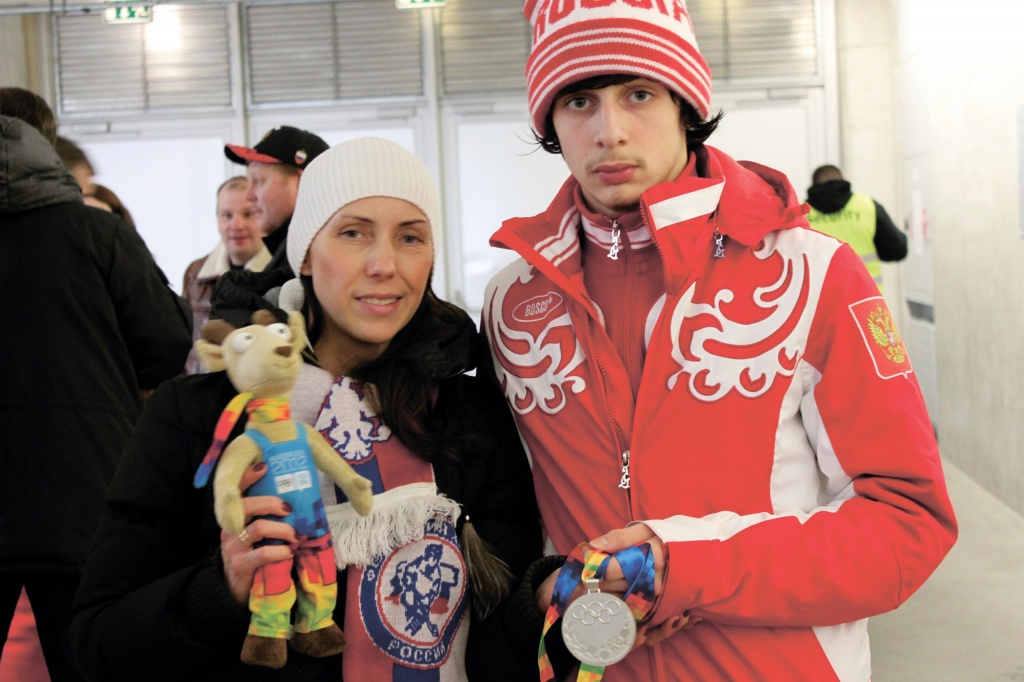 - Was it your family’s tradition to go to all the practices? Who was responsible for that?

- In our family we never had to force our kids to go to practices. They were proud ever since they were kids that they were hockey players. Sometimes 5-year-old Daniil would wake up at 6 o’clock in the morning, walk into our room and say – Mod, dad, why are you still sleeping? We have to get to practice. The practice began at 7. Our kids have never regretted their decision to choose athlete life. Daniil plays professional hockey now. Nikita want to continue his hockey career and become a referee.

- How did they like your son’s hobby in school?

- They understood. We are very grateful to Daniil’s first teacher Galina Konstantinovna. She was very attentive, kind and very, very understanding. She didn’t mind that one of her students sat behind the desk in full hockey gear during first class. Daniil didn’t have time to change to regular clothes after practice before school. Sometimes he would even fall asleep at class. And she never woke him up! Can you imagine? She felt for him like a mother. After all, he had to go to another practice after school. Just like us, deep down inside she must have also believed in that little athlete, who was following a difficult hockey path.

- What was your son’s dream when he was a kid?

- His childhood dream? Can athletes really enjoy their childhood and dreaming? Childhood ends when the kid understands that the sports path he’d chosen is going to be his life. And with the first practice begins everyday work on self-improving.

This is why Daniil’s dream as a kid was connected to sports. He dreamt of becoming a great athlete. An athlete who would make an impact in hockey development with his achievements. He wants his career to be cherished and solid. This is why ever since he was a kid he’s worked hard everyday towards his goal and his dream. He made his choice when he was five. Most parents think it’s weird and unreal, but when your kid at that age tells you that hockey is his life, I think, you should listen to him and trust what’s in his heart.

- Who were Daniil’s role models growing up?

- My son has always looked up to Alexander Ovechkin. Daniil always told me – when Ovechkin retires, it’s going to be my time. He and I have huge age gap, I should replace him. This is why Daniil took number 8. As for hockey heroes among local players, it was Yuri Trubachyov, obviously.

- How did your son spent his first paycheque?

- Daniil is very kind, caring and attentive grandson, son and brother. The first money he’s ever made he brought home to his family. He tries to help us out now, too. Well-being of his family and friends is the most important thing to him.

- The team has fallen on some hard times. A lot of people want results and there’s a lot of negativity. What motivates Daniil Vovchenko for the games in this atmosphere?

- Daniil is tenacious, hard-working and diligent. He’s used to finish what he started. And not just finish but finish with good results. He’s been resilient like that ever since he was a kid. He never allows himself to sit and sulk. He knows how to pull himself together, concentrate and give it a 100% in any difficult situation, be a team player and play for the fans, whom he cherishes and respects very much.

- Do you talk to him before the games?

- I never call him on a gameday. We usually talk in the evening before the games.

- There one from The President Cup where Danya played for Team Russia. Everybody on the team decided well in advance they would shave their hair off if the team wins the tournament. They won and shaved in a half an hour! It was funny to look at them when they receiving their trophies like that (laughing).

His grandmother is another story. She always tells Danya he doesn’t know how to score on a penalty shot. She always tells him that he needs to deke out the goalie and lift the puck and all that. Danya always jokes – grandma, you’re going to be my personal coach soon!


- Svetlana Valerievna, you’re a hockey mom. You know athlete life from within. So what is hockey? Tell us your secret how to raise a decent athlete.

- Hockey life isn’t as simple as it may seem at first. Many believe that hockey means good money and beautiful, carefree life. But those people don’t know the flipside of the coin. It’s also about everyday hard work, tenacity, emotions and sleepless night for the parents. But if I was asked whether or not I would go down that road again with my kids, I’d say yes without hesitating for a moment.