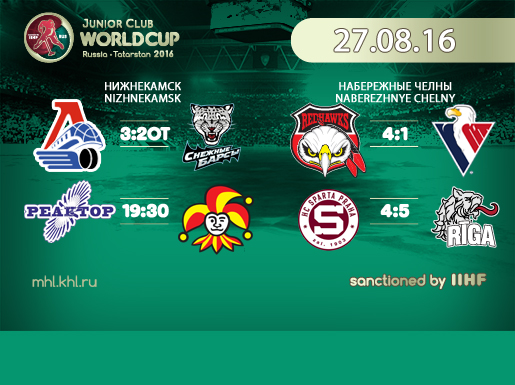 Two of them are semifinal games of the tournament. Three MHL teams and Finnish Jokerit will compete for two spots in the final.


Yaroslavl established a firm control of the game early on, created a few good scoring chances and Artyom Leontyev had to make some saves. On one of the offensive rushes Loko captain Igor Bondyrev checked Snezhnye Barsy defenseman Nikita Medvedev in the head for no good reason and got a game misconduct. However, even without their captain Yaroslavl had a chance to score on the ensuing 5-minute penalty kill but Denis Alexeyev couldn’t score on a breakaway and the puck sailed over the net.

Galym Mambetaliev’s men didn’t create many good scoring chances and the teams went back to playing full strength. Loko opened up the scoring at 10-32. Maxim Afanasyev took a shot, that was followed by a scrum in front of the net and Georgy Ivanov was first on the rebound to tuck it in – 1-0 Yaroslavl. Reigning Kharlamov Cup champions continued controlling the game. Daniil Yurtaikin and Andrei Chvanchikov had good scoring opportunities but neither of them could beat Leontyev with point blank range shots. Late in the period Kazakhstan team got their first penalty of the game. ‘The railway men’ set camp in the offensive end and they took their last shot right with the buzzer.

Early in the second frame Yaroslavl did capitalize on the powerplay. Alexander Kalinin just put the puck on net from the point but that was enough – the puck passed everyone in the traffic, went by Leontyev and right into the net. Halfway through the period Georgy Ivanov got the puck in the neutral zone, burned past Snezhnye Barsy defensemen but didn’t hit the brakes in time and ended up in the net instead of the puck. Snezhnye Barsy found some confidence towards the halfway point of regulation and one of their offensive rushes led to a goal – Dmitry Gurkov skated around Loko’s defensive end and surprised everyone with a shot. Loko netminder was caught off guard and the puck went in 5-hole – 2-1. In the last minute of the frame Loko had a great long passing play in the offensive end but Vladislav Chervonenko shot it right at the goaltender.

Early in the third stanza Astana looked more active right up until Denis Alexeyev got his second breakaway chance of the game. He couldn’t bury it but he did draw a penalty. After that ‘the railway men’ ran into a penalty problem. Kirill Slepets’s minor penalty was followed by Nikita Gromov’s and Yaroslavl found themselves 2-man down. Dmitry Krasotkin’s men survived the penalty kill thanks to a broken stick. But just as their fifth man got back on the ice, Snezhnye Barsy tied it up – Alexander Melikhov got the marker. Galym Mambetaliev’s side had to finish the regulation down a man as they got two minor penalties in a row. However, they pulled through and the game went to overtime.

Artur Kayumov scored the overtime winner for Loko. 3-2 and Yaroslavl will now face either Reaktor or Jokerit in the final game of the tournament.

The Swedes opened up the scoring at 08-13 – Emil Gabrielson got the marker. The game featured a lot of penalties and brawls and the teams rarely played full strength. In the second period of play the teams traded goals – Dominik Volejnicek scored for the RedHawks, while Marco Halama netted one for Slovan. Late in the third stanza Malmö scored two more goals. Oliver Olsson doubled RedHawks’ lead and Filip Lennstrom set the final score at 4-1.

Tomas Kratky opened up the scoring at 09-40 on a powerplay. Roberts Kalkis tied it up seven minutes later. At 25-49 Aleksandrs Nizivijs’ men got their first lead of the night but the Czech team exploded in the next five minutes scoring three goals. The teams kept trading goals in the third period as well. Now it was Riga’s turn to score three goals in six minutes – Pauls Svars got one of the markers while Kirils Galoha scored two goals. Riga held on to the 5-4 lead and once again finished 5th at the Junior Club World Cup.

Reaktor Nizhnekamsk beat Jokerit Helsinki in the second semifinal game of the 2016 Junior Club World Cup and will compete against Loko Yaroslavl in the final game of the tournament. The game at Neftekhim-Arena ended with a final score 4-2.

The teams began playing fast-paced hockey right away and the home team felt very confident as their fans were loudly cheering them on. This is why it’s only logical Wouter Peeters was the first goaltender to give up a goal in the game. At 07-57 Daniil Voyevodin was first on the rebound after Alexander Dzedayev’s shot and sent the puck into a wide-open net. ‘The Jokers’ could have tied it up moments later but Nicholas Rintamäki couldn’t beat Roman Golovanov – who replaced Georgy Anarkulov in Reaktor’s net - with a point blank range shot.

Jokerit kept the pressure up and soon it was Reaktor defensemen who had to get to work. Eetu Pylkkänen got a minor penalty and that set Jokerit back a little bit. Reaktor doubled their lead on the ensuing powerplay – Dmitry Korchemkin got the marker, while Rafael Bikmullin picked up an assist. It looked like Reaktor were going to hold on to the 2-goal lead till the first intermission but with just a few seconds left to play in the frame Niko Happo stole the puck in the offensive end and sent a bullet past Golovanov to make it 2-1.

The second period started with similar hockey. Nizhnekamsk had the puck more often and they were going for long offensive rushes, keeping Peeters busy. The Finns played smart defensively and created promising counter-attacks. Bikmullin-Nabiullin-Ugolnikov line was the most dangerous on Nizhnekamsk. They were creating one scoring chance after another but had nothing to show for it. The number of penalties went up in the second period and one of them led to another Reaktor goal – this time it was Vitaly Soloninka who found the back of the net.

35 minutes into the game Daniil Voyevodin, who just got back on the ice from the penalty box, got the puck from Jokerit goaltender right on the blade of his stick. However, he wasn’t ready for a present like this and couldn’t bury it. Late in the period Nizhnekamsk had to kill off a 5-on-3 powerplay but just as they got their fourth man on the ice Jokerit once again made it a 1-goal hockey game. Home team got too close to their net and Sampo Paulaharju sent it home to make it 3-2.

Early in the third period of play Jokerit stood their ground not letting Reaktor capitalize on their scoring chances and then went up the ice looking for the game-tying goal. Golovanov had some work to do but soon enough the Finns shot themselves in the foot – Roope Laavainen got a 5-minute major and a game misconduct for spearing. 51 minutes into the game Nicholas Rintamaki had a great chance to bring it all back to even again but he couldn’t beat Golovanov with a point blank range shot.

Late in the game Jokerit coaching staff called time-out, pulled their goaltender for an extra attacker and went for one final push. Nizhnekamsk survived it and proceeded to the gold medal game of the 2016 Junior Club World Cup where they will go head-to-head with Loko Yaroslavl. Rafael Bimullin set the final score at 4-2 as he scored on an empty net.