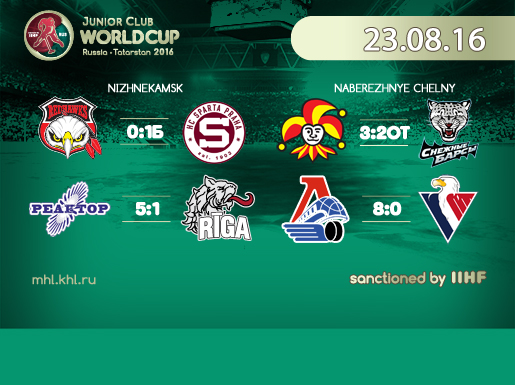 
Sparta Praha got their second win at the Junior Club World Cup and once again they got it in a shootout against Malmö RedHawks. There were no goals scored either in regulation or overtime. 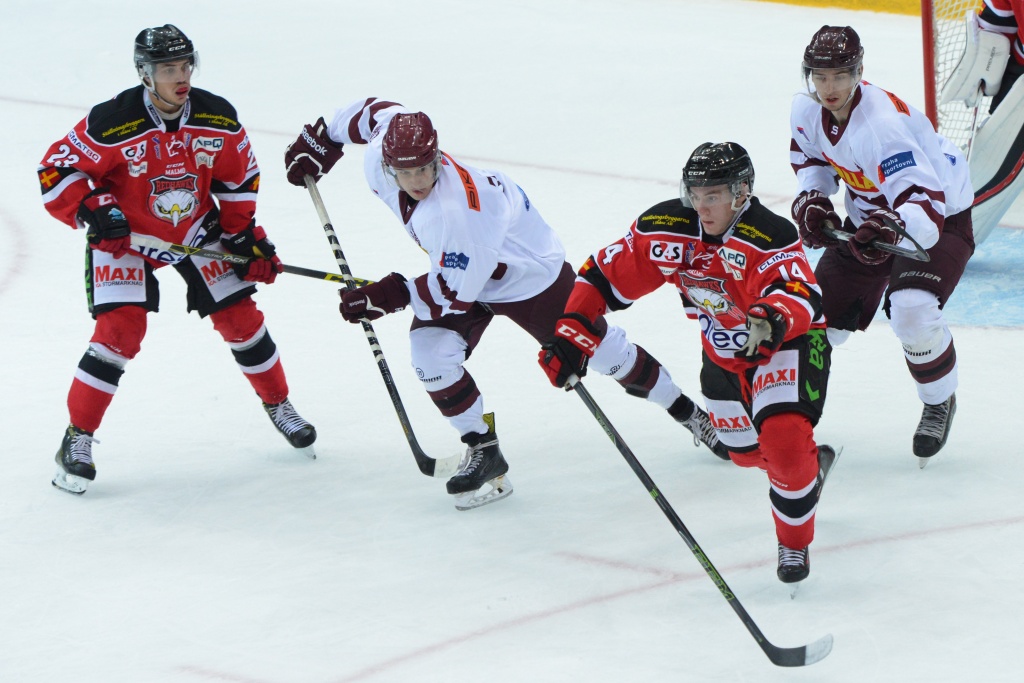 There was nothing special to remember in the opening period of play. The teams played a well-paced game, the RedHawks outshot their opponents but the teams were still tied where it mattered the most – the scoreboard. Two high-sticking minors were really the only thing that stood out in the frame. First it was Jakub Wojnar who went to the penalty box and then a minute later it was Freddy Roslund who got sent off for the same penalty.

The RedHawks looked like a better team again in the second period but they still couldn’t score. As for Sparta, they had a few good counter-attacks but they were all shut down by other Malmö defensemen or goaltender Tim Hultstrand. In the third period the RedHawks put even more pressure on Sparta but the frame also featured no goals. Both teams got a minor penalty in overtime but couldn’t capitalize on their powerplay opportunities and the game went to a shootout.

Even in the shootout the teams were even. Martin Svoboda scored for Sparta but Oliver Olsson tied it up. However, the Czech team managed to prevail as Tomas Jandus scored on his attempt and Adam Wolf made a save in the next round.


Jokerit beat Snezhnye Barsy in overtime and enjoyed their second win at the Junior Club World Cup. The Finns trailed behind twice but managed to tie it up late in the third period and won another point in the extra period. Jokerit and Snezhnye Barsy didn’t do what they did earlier in the tournament and opted for a cautious game in the early minutes of play instead of going for a fast-paced game. That was understandable as the winner of the game was going to get a higher place in Group B table. Snezhnye Barsy netminder Artyom Leontyev had more work to do but most of the shots Finns took went wide and over the net. Jokerit had a little advantage but it was Snezhnye Barsy who opened up the scoring as they got one in on a powerplay – Alexander Tokarev got the marker. Jokerit had a chance to tie it up before the first intermission but Leontyev made a great save as he was already lying on the ice.

At 21-06 ‘the Jokers’ brought it all back to even – they caught Snezhnye Barsy changing on the fly, Jesse Niemi got on a breakaway and buried it to make it 1-1. It was obvious Snezhnye Barsy did not plan this to happen and they stormed down the ice to set camp in front of Wouter Peeters’ net. Soon Oula Kuura got a minor penalty, granting his teammates a ton of hard work for the next two minutes. Snezhnye Barsy had Peeters beaten with one shot but it rattled off the goal-post. However, even the goal-post couldn’t stop Artyom Bakushin’s shot at 39-42. Alexander Melikhov and Alexander Tokarev picked up the assists on the play.

48 minutes into the game Astana forward Aziz Seitanov got a game misconduct for checking to the head. Arttu Harju, who was on the receiving end of the hit, could only leave the ice with his teammates’ help. Soon after that Seitanov’s 5-minute major was followed by a minor penalty for too many men on the ice – Snezhnye Barsy were careless with their line change and that left them down two men. It wasn’t easy but Astana killed off the penalty. A little later Joel Pyykkönen got a game misconduct of his own – also for checking to the head.

Not only the Finns killed off the penalty, but they also tied the game up. Snezhnye Barsy defensemen got caught on a counter-attack and Sebastian Ilola buried one past Leontyev.

Sampo Paulaharju scored the overtime winner. With this win Jokerit have 5 points.


Reaktor Nizhnekamsk beat HK Riga in MHL clash at Junior Club World Cup and finished on top of Group A after a shaky start. 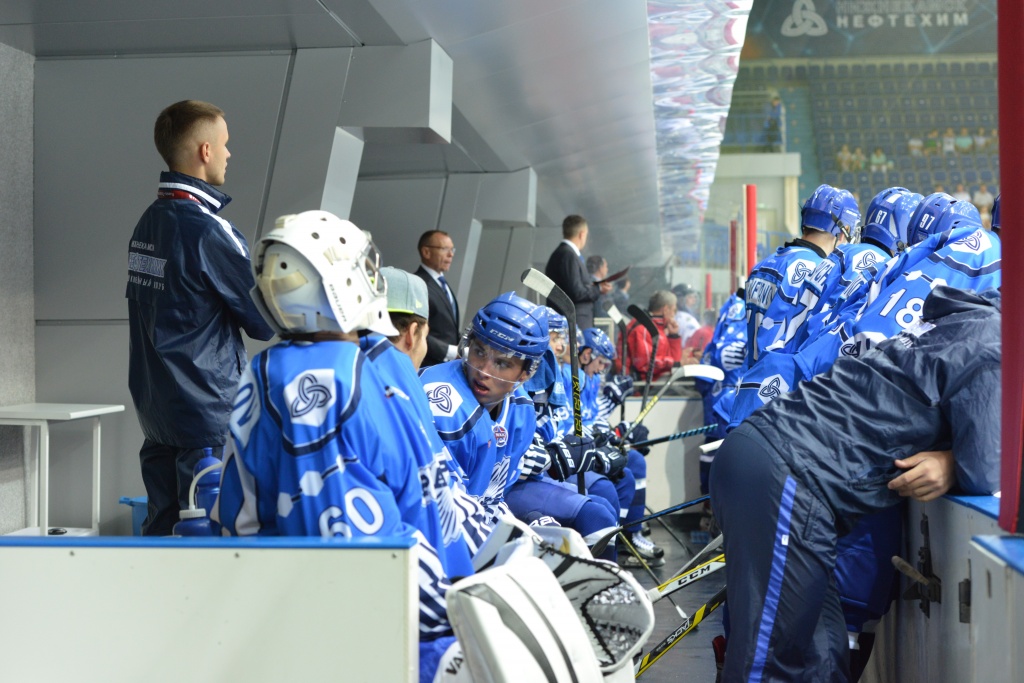 Aleksandrs Nizivijs let goaltender Gustavs Grigals get some rest as he was replaced in net by Antons Naumovs. As for Nizhnekamsk they went with their starting goaltender Roman Golovanov once again. Home team managed to score a quick goal – just over two minutes into the game Reaktor captain Bulat Nabiullin opened up the scoring. Incidentally, Nabiullin scored another quick goal in the game against Sparta Praha. Home team, cheered on by their fans, was creating a lot more scoring chances – in the first 20 minutes of the game HK Riga took just two shots on net and their coaching staff had to find the right words in the intermission.

Riga looked better in the second frame but that was spoiled with too many penalties they were getting. At 33-51 Bulat Nabiullin scored his second of the night on powerplay as HK Riga got a minor for too many men on the ice. In the remainder of the period Nizhnekamsk created a few more good scoring chances but Naumov held the fort.

Early in the third stanza home team scored two more goals. Arsen Khisamutdinov made it 3-0 just 47 seconds into the period and three minutes later Arsen Yesayan scored Reaktor’s fourth goal on HK Riga. Shortly after that the Latvian team finally got one past Golovanov – Renars Cipruss got the marker.

Reaktor head-coach Alexander Sokolov called a time-out right after that and it certainly was good for his team – just four minutes later Rafael Bikmullin, who topped MHL in scoring last season, made it 5-1, setting the final score. With this win Reaktor finish Round Robin with 6 points and will face Slovan Bratislava in the quarterfinals.


Loko Yaroslavl enjoyed a blowout win over Slovan Bratislava in Round Robin and finished on top of Group A. The game took place in Naberezhnye Chelny and Yaroslavl won it 9-0. 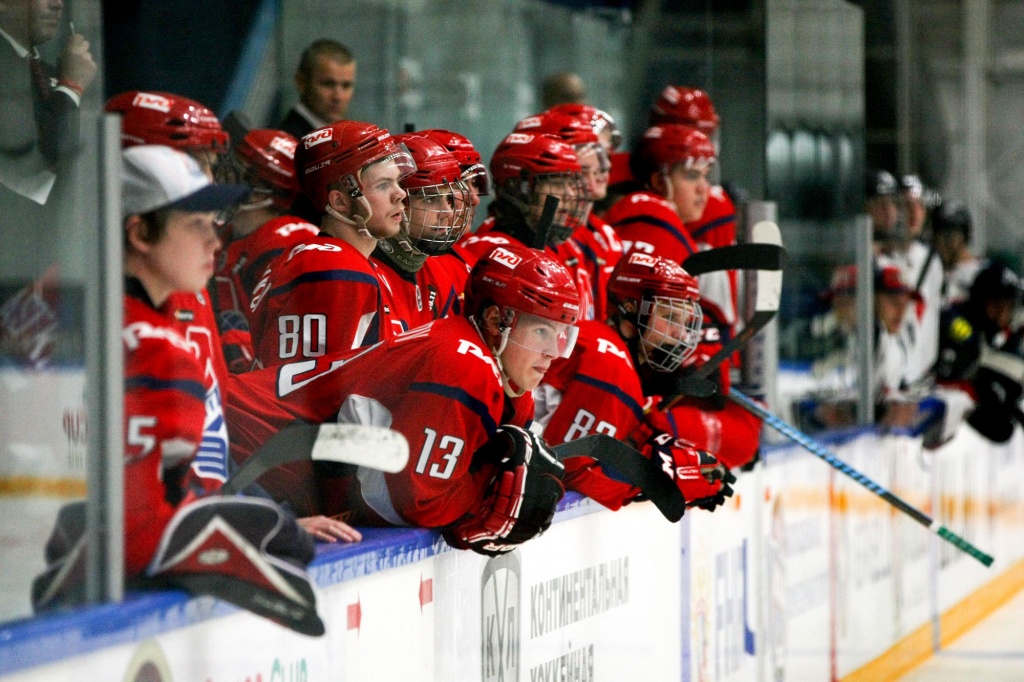 Ilya Konovalov took place in Loko’s net for the final game of Round Robin as he replaced Anton Krasotkin. The Slovak team did well for the first eight minutes of the game but the second they let their guard down, ‘the railway men’ made them pay for it – Kirill Slepets opened up the scoring at 08-36. In the very next shift Artyom Koksharov doubled the lead for Yaroslavl. Almost right after that Slovan got a minor penalty and Daniil Yurtaikin scored on the ensuing powerplay to make it 3-0 less then 11 minutes into the game. Reigning Kharlamov Cup champions scored two more goals before the first intermission – Roman Krikunenko and Igor Bondyrev got the markers and gave a lot of troublesome thoughts to Slovan coaching staff.

Just a few moments into the second frame Martin Pus got a minor penalty, which couldn’t not affect the visiting team chances. Halfway through the period Yaroslavl got a 5-on-3 powerplay. They didn’t manage to score but when Slovan got their fourth man back on the ice Danila Tsyganov finished a neat passing play to make it 6-0 Loko. Nikolai Averin and Andrei Chervonenko picked up the assists on the play.

As some of the fans were still just making their way back from the intermission, Ivan Romanov scored Yaroslavl’s seventh goal – it took him just 15 seconds. Slovan players had already given up at the point but Yaroslavl weren’t holding anything back – Andrei Chervonenko made it 8-0 at 48-09. Daniil Yurtaikin set the final score at 9-0 just 36 seconds later as he netted his second of the night.