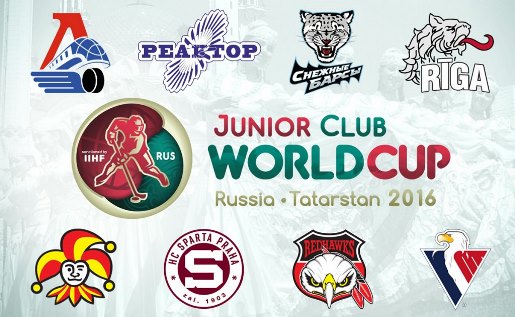 MHL has set the schedule for the 2016 Junior Club World Cup, which will take place in Nizhnekamsk, Russia and Naberzhnye Chelny on August 20th, 2016 to August 28th, 2016.

The teams will be divided into two groups. Every team will face every team in round robin. Group A teams will play in Nizhnekamsk, Russia, while Group B teams will compete in Naberezhnye Chelny, Russia. Two teams from each group will go on to the medal round. Bronze medal and gold medal games will take place on August 28th, 2016 in Nizhnekamsk.

Nizhnekamsk fans will be treated to clash between their home team and Swedish Malmö, Sparta Prague and HK Rīga, which Reaktor never faced in MHL as the teams play in different conferences. The same goes for Loko Yarosavl and Snezhnye Barsy from Astana, Kazakhstan, which will face Finnish Jokerit and Slovan from Bratislava, Slovakia in round robin. The latter two traditionally finish high in the standings of their respective championships. Slovan are reigning champions of Slovakian junior league, while Jokerit won the 2015/2016 regular season in Finland.

True to its nature Junior Club World Cup will feature very strong teams, even though there a several newcomers at the tournament. Just three out of eight participating teams have Junior Club World Cup experience – Malmö, Snezhnye Barsy and HK Rīga. Other teams will get their first taste at the tournament, which only augments its level of intrigue.

Game times may be changed