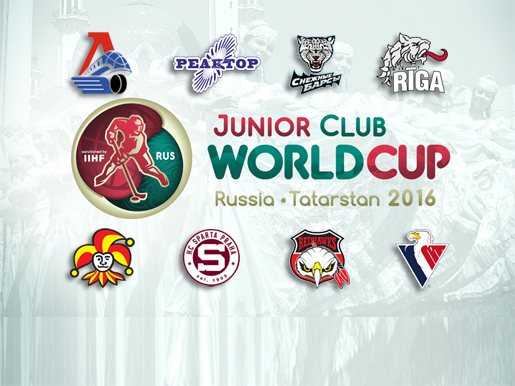 2016 Junior Club World Cup will take place in August in the Republic Of Tatarstan in the cities of Nizhnekamsk and Naberezhnye Chelny. This year there will be eight competing teams from Russia, Kazakhstan, Latvia, Czech Republic, Finland, Sweden and Slovakia. The tournament will run from August 20th to August 28th at Ice Palace in Naberezhnye Chelny and Neftekhim Arena in Nizhnekamsk. There will be five newcomers at the tournament – reigning Kharlamov Cup champions Loko Yaroslavl, host-team Reaktor Nizhnekamsk and also national champions from Finland (Jokerit U20), Czech Republic (HC Sparta Praha) and Slovakia (Slovan Bratislava). After a successful MHL playoff run and winning MHL Supercup, Yaroslavl look poised to win yet another trophy. Dmitry Krasotkin led his team to Kharlamov Cup in his first season as Loko head-coach. We’ll see if he can win his first Junior Club World Cup this August. Nizhnekamsk got a Junior Club World Cup berth as the host-team of the tournament. Last season Alexander Sokolov’s side made the playoffs but lost in to MHL reigning champions at the time Chayka Nizhny Novgorod in exciting 5-game series. Nizhnekamsk top players looked amazing in the regular season. Rafael Bikmullin topped the league in both points and goals – he scored 34 goals and added 33 assists for a total of 67 points in 44 games. Kamil Fazylzyanov topped the league’s defensemen in points. He scored 9 goals and added 19 assists for 28 points in 44 games. Reaktor’s all-time best in MHL was getting eliminated in the quarterfinals in the 2014/2015 season. Last season Snezhnye Barsy enjoyed their best season in the MHL. Led by head-coach Galym Mambetaliev made it to Kharlamov Cup Quarterfinals, while previously they had made the playoffs just twice, both times getting eliminated in the first round. Last season they lost in exciting 5-game series to Chayka Nizhny Novgorod. Latvian team hasn’t missed Junior Club World Cup once but they didn’t make Kharlamov Cup playoffs last season. Among HK Riga alumni there are forward Miks Indrasis, who plays for Dinamo Riga and Team Latvia and goaltender Kristers Gudlevskis, who made a name for himself with a stellar performance against Team Canada at the 2014 Winter Olympics in Sochi, Russia. Jokerit’s junior team will compete at the Junior Club World Cup for the first time. Previously Finland was represented at the tournament by TPS, HPK, Espoo Blues and HIFK. Jokerit had the best regular season record in 2015/2016 in Finnish junior league. Legendary Teemu Selanne is the most famous alumnus of the team. Sparta Prague had the best regular season record in junior Czech Extraliga last season and will compete at the Junior Club World Cup for the first time. Last season Sparta lost the final series and won silver medals. Before Sparta Czech Republic was represented at the tournament by Chomutov Pirati, twice by Energie Karlovy Vary and Vitkovice Steel. Sweden has already participated in Junior Club World Cup. In the inaugural tournament in 2011 Swedish team finished 3rd in Group B. Malmö RedHawks partook the 2014 Junior Club World Cup. That time the Swedes also couldn’t make it past round robin having finished 4th in Group B. Malmö RedHawks are one of the most consistent foreign participants of the tournament excluding MHL teams. Among the most famous Malmö RedHawks alumni there are several current NHL players – Frans Nielsen (New York Islanders) and Carl Söderberg (Colorado Avalanche). Both of them will play for Team Sweden at the upcoming World Cup in Toronto, Canada.

Slovan will be the second Slovakian team to compete at the Junior Club World Cup. Tatranski Vlci were the first Slovakian team to participate in the tournament in 2011. Slovan Bratislava’s junior team are the reigning champions of Slovakian junior league. Two Russian players won gold medals with the team last year – Daniil Dmitriev and Artyom Alexeyev.
Share
Читайте также: