“The goal of making the play-in has been an inspiration to everyone in Tyumensky Legion.” Danila Ganin – about team achievements and JHL scoring race “The goal of making the play-in has been an inspiration to everyone in Tyumensky Legion.” Danila Ganin – about team achievements and JHL scoring race

The forward moved to Tyumen from Omsk, he is one of the top scorers of the League.

19-year-old forward Danila Ganin started playing hockey in Surgut, used to be a player of Salavat Yulaev and Omskie Yastreby systems, joined Tyumensky Legion before the start of the 2022/2023 season. The Tyumen team was sitting near the bottom of the standings in previous seasons, but this year it is adequately competing with other teams in the Silver Division of the Eastern Conference and is two wins away from the play-in zone.

Danila Ganin has scored 22 (5+17) points in 19 games, he is ranked tenth among the top scorers and third among assists leaders. In an interview with the Junior Hockey League website, the forward talked about Surgut, Ufa and Omsk hockey systems, the goals he sets for himself playing for Tyumensky Legion, the way he prepares for games and his love of music.

“When I was a kid, I cried every time I didn’t get a puck”

– Who signed you up for hockey?
– When I was eight years old, my mom asked me if I wanted to play hockey. I said, “Let’s try.” But I cried all the time in the first six months of practicing when I didn’t get a puck or if no one wanted to send me passes. At first, my mom was forcing me to attend practices, but then I became keen on it. I also used to go to the swimming pool, but six months later I said that I only wanted to play hockey.

– You started playing hockey in Surgut. What is the level of hockey there?
– They have a good school there, excellent conditions for practicing. It is told that they wanted to found a JHL team and a SHL team there, but somehow it didn’t work out. There are well-known Surgut trainees – for example, Igor Bobkov and Alexander Yaremchuk who won the Gagarin Cup with Avangard.

– Why did you move to the Salavat Yulaev system?
– Unfortunately, Surgut does not offer any growth prospects, there is no vertical there. That was why I had to move to a different club that has a system so as to work towards more development and progress. My grandparents live in Ufa, so moving there was unchallenging. I was invited to a try-out before the New Year, but there were some issues with papers, so I joined the team for the summer training camp before the 2017/2018 season.

– In what way was it different from the Surgut system?
– Salavat Yulaev had more coaches: there were specialists for defensemen and forwards. Ufa is a hockey city, the organization is of high level.

– Why did you move to Omsk a year later?
– I was initially invited to both Ufa and Omsk. I decided on Salavat Yulaev, but things turned sour. I gave a call to the Omsk club and asked if it was possible to try out for the team. They agreed and I made the team. When I came there, the high level of the organization became evident right away. Hockey is very popular in Omsk, and the city is great - I liked it there.

“I do check the top scorers list, it’s a good race and it motivates me”

– How does the fact that Omskie Yastreby and Tyumensky Legion have different goals affect your performance?
– It doesn’t affect me at all. I understand that Omsk pursues more challenging goals and Tyumen is working to make the play-in. Everyone on the team is aware of this goal. But being a player, I just hit the ice and do my job. My main goal is to win every game.

– Tyumensky Legion was sitting near the bottom of the standings in previous seasons, but this year you are pushing for a playoff berth. Does it apply pressure?
– There is no pressure. On the contrary, the goal of making the play-in has been an inspiration to everyone in Tyumensky Legion. We do not discuss our progress. The difference with the previous season is obvious to everyone. We have a tightly-welded team, I believe that we will succeed in it all.

– Omsk has both a KHL team and a SHL team, while in Tyumen there is only a SHL team. How does it impact your goals?
– Making a SHL team also means moving up the tiers, so I want to progress and play for Rubin. It makes no difference whether to make KHL or SHL debut, in any case, it is the next stage of development. The main thing for me is to play and show good results, score more goals and do everything for my team to win.

– You are now ranked tenth among the top scorers and third among assists leaders of the League. How do these achievements affect your performance?
– I’ll be honest with you, I do check the top scorers list (laughs). It’s a good race and it motivates me. I am happy for other players when they score points. But still, you always want to be the best, I think it is a normal thing in sports.

– Do points help you gain more confidence?
– When you score more points, you start to feel different: you realize that your actions bear fruit. I understand that I am moving in the right direction.

– You have more assists than goals. What would you choose: being credited with an assist or scoring a goal?
– In fact, it just happens this way: I close my eyes and shoot, and my teammates redirect the puck. But if I am to choose between scoring a goal and assisting an open-netter, I will go with the latter. Scoring goals is always great, but sending a successful pass makes you feel good and calm, because everyone is happy: me, my teammate and the entire team.

– What unusual pregame rituals do you follow?
– Taking the ice with my right skate first has been my habit since childhood. I also observe common traditions, for example, the one of not packing your bag until the end of the game when you are not on the dressed list. As for the rest, I don’t care. I can even drink some coke or coffee before a game. I don’t think it affects my performance in any way. General preparation is more important than some tricky rituals.

– Do you eat sweet things during the season?
– Yes, but moderation is the key. I don’t know a single hockey player who would eat clean 100% of the time (laughs).

– Do you prefer to prepare for games in the privacy of your own mind or together with the team?
– I usually stay alone with my thoughts. I almost always wear headphones on my way to the game and when I am in the locker room. I talk to everyone at the warm-up, but I try I try to limit communication before that.

– How do you calm pregame jitters?
– I just think nothing but the game. When I take the ice, I am focused on playing the right way and helping my team win. I think only about hockey on game days, analyze the opponent. And I always call my family after a pregame skate – for my mom and my grandparents to give their word of advice.

– Do they give you some pointers on the game or just wish good luck?
– Both. They practically “play” together with me. They’ve been in hockey just as long as I have. So they do have an understanding of it, they always watch my games and provide sound advice. My grandfather is able to make professional judgements, as he played hockey at an amateur level himself. He used to be a forward, just like me, so he was giving me a lot of pointers even when I was a kid. For example, he says that I need to be in the slot zone, because if the puck hits me, I can get redirected into the net. He reminds me that it is important to always stay alert.

– What type of person are you?
– When I am on the ice, I demonstrate passion and commitment to win. But I am a calmer and more open-hearted person in real life.

– Doesn’t this passion to win change into exaggerated aggression and hastiness?
– It does not. I don’t respond to provocations. And I shake everything off right after the final buzzer, regardless of the result of the game. I understand that everything is already over and I need to go back to normal. 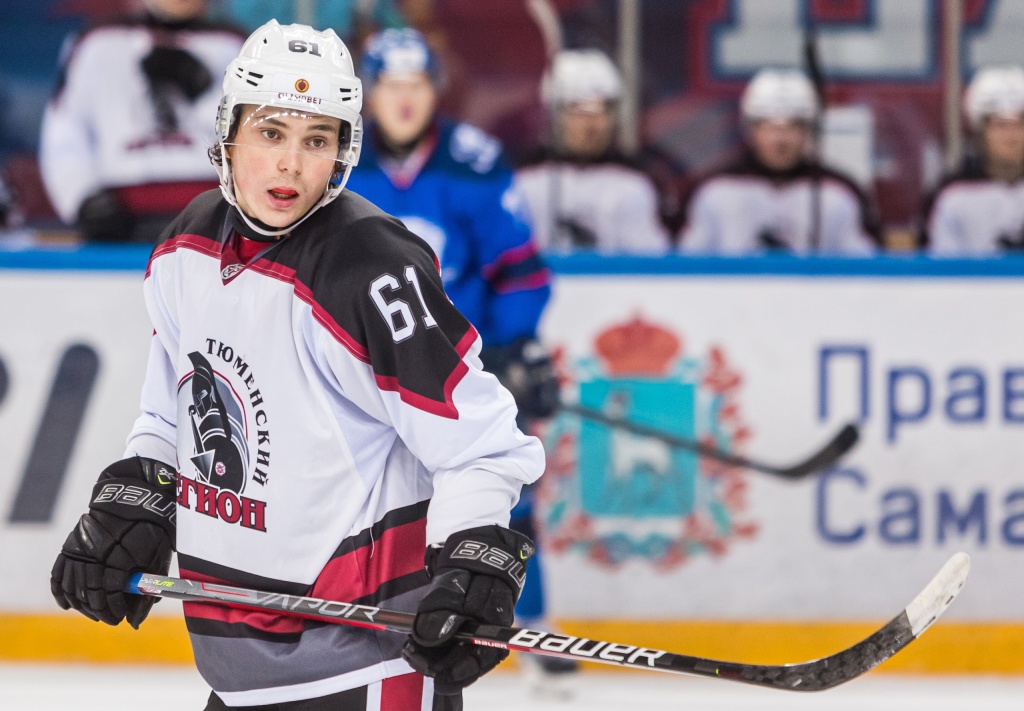 “My dream is to learn to play guitar, so as to get together with friends and sing some songs”

– What hockey players do you like?
– Alexander Figurin, Timur Mukhanov and Artyom Svishchyov from Omskie Yastreby, Ruslan Gazizov from London Knights, Alexei Prokopenko from Krasnoyarsk Sokol and Nikita Grigoryev from Sibirskie Snaipery. They all are my friends (laughs). But I really think they are good players - they are cool-headed and take their job seriously. I also like Trevor Zegras and Auston Matthews. They have excellent puck control, good skating skills and great understanding of the game.

– And if we speak about other sports?
– As to soccer, I like Neymar. He is spectacular and has a great number of nice moves in his arsenal. He is very interesting to watch. I like to play soccer and basketball. It helps to develop different skills.

– What do you do in your free time?
– I spend my free time with my friends, sometimes I go to a computer club. I often do my homework, I am on the Siberian State College of Olympic Reserve and pursue a degree in coaching. There are no issues with balancing studying with games as we have remote learning.

– What are your hobbies?
– I love listening to music and my dream is to learn to play guitar, but I can’t find time to do it so far. It would be cool to get together with friends, unlimber a guitar and sing some songs together. I also like to watch video clips of the singers I like.

– Who are your top 5 favorite singers?
– I like foreign rap: Drake, Tupac Shakur, Travis Scott, XXXTentacion and ASAP Rocky. 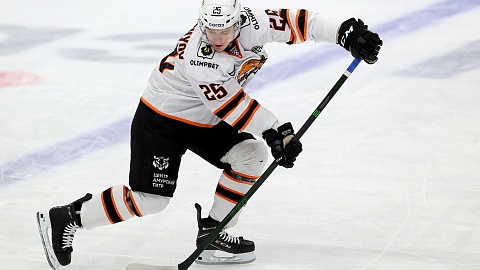 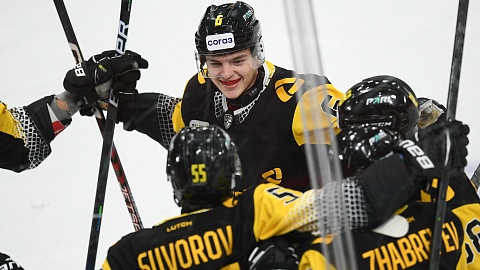