“I have a motivation to make it to the KHL, but the most important thing is for my team to win.” Dmitry Utkin returned from Canada and helps Kapitan to notch wins “I have a motivation to make it to the KHL, but the most important thing is for my team to win.” Dmitry Utkin returned from Canada and helps Kapitan to notch wins

The leader of the Stupino team learns French and reveals the secrets of the team's strong start.

Forward Dmitry Utkin has a variety of hockey experience. He used to be a Dynamo and Spartak schools trainee, went to play in Slovakia at the age of 14, and ended up in Canada two years later. In 2019, the player returned to Russia, made his Junior Hockey League debut with Russkie Vityazi, spent two seasons in the National Junior Hockey League playing for EkoNiva-Bobrov. He started the 2022/2023 season with Kapitan Stupino.

Dmitry is the team’s best forward of the start of the regular season. He scored six (3+3) points in five games. Kapitan got off to a great start, having won all five games while beating three teams of the Western Conference Gold Division. In an interview with the official JHL website, the 20-year-old forward talked about playing in Slovakia and Canada, the experience two years in the NJHL gave him, the successful start of the 2022/2023 season and learning French.

– How did you start playing hockey?
– My mom brought me to Dynamo sports school when I was four years old, and before that, she used to take me to a skating rink in my hometown Solnechnogorsk. She still comes to every game, follows my career: she always gives me some pointers, she can criticize or praise me. I also played chess. A very interesting sport that requires good thinking. As my mom says: “Hockey is fast chess.”

– What were your impressions of your first hockey practices?
– I remember using a chair as a skating aid. I took a fancy to hockey right from the first practice. Then I started going to hockey games, and fell in love with this sport. Growing older, I realized that I wanted to develop my career and become a professional player.

– You started with Dynamo and then moved to Spartak. Why?
– Dynamo had a new coach, he didn’t see me on the team. So, I moved to Spartak at the age of 12. I am very glad that I’ve been with both sports schools, each of them gave me a boost. The aspects of the game are taught since childhood, the practices were mainly devoted to skating and dribbling back then. These qualities need to be developed at a young age.

– How long did it take you to get adjusted to the new team?
– Everything was fine right from the start: I was on friendly terms with everyone, I still keep in touch with some of the guys, we meet at games. Now Alexander Timchenko plays for Kapitan, we played together for Spartak. I know Valery Trifonov and Alexander Kulagin from there too. I was at school together with Artemy Pleshkov.

“Teachers in Canada were amazed of my level of English”

– You played in Slovakia for two years. How did you happen to be there?
– I had been there in the summer for preseason training camp. I was noticed by coaches from the local team Gladiators Trnava, they offered me to join their team. I told them that I would think about it. When I returned to Russia, Spartak told me that I would not play many games in the new season. My mom and I decided that I needed to go to Slovakia. It sounded interesting: gaining new experience, seeing how people in Europe play hockey and handle work.

– How can you evaluate the level of hockey there?
– I would not say that it is much lower than in Russia. Now the Slovakia national team performs well at international competitions, the development of hockey is going uphill. There were several other players from Russia there. The five of us lived in a two-room hotel suite with 3-time meals, so we all felt comfortable. My mom visited me a couple of times, we went to Vienna and Bratislava together. And I visited almost all the cities of Slovakia with the team, I really enjoyed it.

– Why did you leave for Canada?
– I played in the U18 league and had to move to the junior level the following year. But that team was relegated, so there was no point in staying in Slovakia. There was an option to go to Canada to an academy near Toronto. I was very worried, it was a different level, after all. When I arrived, I was amazed: everything was there for hockey. You come to a rink, and it has not one ice, but eight. I have never seen anything like that in my life.

– Why did you return to Russia?
– Accommodation, food, school, practices – everything was expensive. So, my mom and I decided that it was time to go back. But I am very grateful to her for such an opportunity. I gained valuable experience, which did a power of good.

– Did you acquire some English there?
– Yes, even though I was able to speak pretty good English at school. There was a language barrier at first, but it happens with everyone. It took me about a month to overcome it and then I was able to talk without an interpreter. Even local teachers were amazed of my level of English. Obviously, my grammar wasn’t perfect, but they did not pay attention to this, because I was practically fluent at such a young age. I even thought in English. But now I’m in Russia, things are fading from my memory. I try to sustain my level of English: I watch series and films in the original, I study the language at the university.

“If you get a chance, you need to convert it. You might not be granted a second one”

– In the 2019/2020 season, you played three games for Russkie Vityazi. How did you make it to the team?
– When I got back to Russia, I went into a tryout for Russkie Vityazi. They told me at once that I wouldn’t be able to play many JHL games, I was still at the age of transition. That's why I only played three games. Then a new coach joined the team, he didn’t see me on the team, and I left.

– After Russkie Vityazi, you spent two years in the NJHL with EkoNiva-Bobrov. What experience did you get there?
– That time has given me a lot. I played more games, grew up hockey-wise. I was a third and a fourth liner during my first 2020/2021 season there. We battled for an award-winning place, but lost in the playoffs to the future champion Loko-Junior. The following year, I played on the second line, was scoring goals and collecting points. I got stronger, gained muscles: we trained a lot, including working out in a gym - it delivered benefits. We won the regular season, but the playoffs did not work out the way we’d want to, we lost to Polyot in the semi-finals and finished third. We had a good team, many players got noticed and invited to other clubs.

– You’ve got off to a great start. What do you think it is due to?
– We had an excellent productive preparation, we worked a lot. That was why preseason games were not quite spectacular, it was tough, we practiced hard. But the coaches were reassuring us, saying that later it would help. We felt it at the beginning of the season. We are glad that we managed to win first games, but they are already forgotten and we are preparing for the next ones.

– You are the top goalscorer and the top scorer of the team. What’s your secret?
– I have a motivation to make it to the KHL. But I don’t aim for scoring goals in every game. I want to contribute to the success of the team, I want my team to win, it is the most important thing. We have high goals for this season: clinching a playoff spot at least. I think that all Silver division teams want to get to the Gold division.

– Do points collected add to self-confidence?
– When I hit the ice, I try not to think about points. All my thoughts are about playing the right way offensively or defensively. If you get a chance, you need to convert it. You might not be granted a second one. That’s why I try to take every chance seriously.

“You have to be pushy in hockey, no other way”

– What type of person are you on the ice?
– I would not say that I am a calm person, but it is difficult to put me out of temper. Emotions run high on the ice, it might happen so that you can’t steer them, I try to avoid such situations. But you have to be pushy in hockey, no other way. I am more gentle in everyday life

– What hockey players do you look up to?
– I always followed Pavel Datsyuk’s career. He is a center, like me, so I tried to borrow some moves and use them. I also like Connor McDavid – he is a very fast and agile forward, scores a lot of goals. Evgeny Kuznetsov is one of the best Russian center forwards. I like how Ivan Barbashev plays. I try to follow many players who play center.

– Do you devote your free time to hockey?
– I never stop thinking about it. I always watch highlights over breakfast. But I also try to get rested and spend some time with my loved ones. My girlfriend and I like traveling: we go to different Russian cities and to foreign countries when possible.

– What places would you like to visit?
– My dream is to see Paris and Egyptian pyramids, I’d love to travel around the USA, walk around Miami and Los Angeles. I want to visit New York again. I visited it once on my way back to Russia: there were no flights from Canada, so I had to take a bus to New York. I only had three or four hours to walk around the city before taking my flight. I always wanted to visit it, because I had been cheering for the New York Rangers since childhood. A little dream of mine came true, but I still want to visit it again. I like traveling. It has its roots in my childhood - when I lived in Slovakia and Canada. I want to know how people of different countries live.

– Do you like other sports?
– I follow Russian athletes performing in various sports. I like soccer most of all, I played it a little when I was a child. In the seventh grade, I started learning French at school - I liked it, and I had extra classes with a tutor. So, I decided to check if there was any soccer team in Paris. Since then, I have been cheering for Paris Saint-Germain. I would love to go to a soccer game, to see PSG play. I really hope that they will win the Champions League one day. 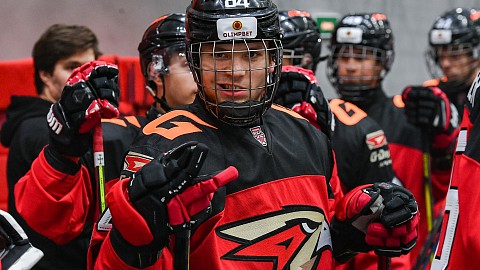 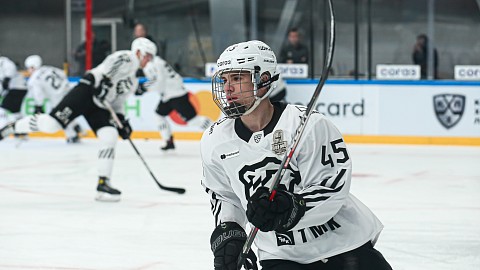