20-year-old Marat Khusnutdinov is one of the leaders of SKA in the KHL. How has his career developed? 20-year-old Marat Khusnutdinov is one of the leaders of SKA in the KHL. How has his career developed?

The story of the forward of the St. Petersburg system who won the JHL championship in his last year at the junior level.

An effective offensive line appeared in SKA in the offseason - Damir Zhafyarov and Marat Khairullin playing wingers and Marat Khusnutdinov playing center. The latter is one of the best young Russian center forwards, who was wearing the “C” during the preseason.

In the 2021/2022 season, Marat appeared in 32 games for the main St. Petersburg team, but mostly played wing. Young centers moving up the tiers, do not always play their usual position, because it requires a wider range of responsibilities compared to the wing. Khusnutdinov has grown stronger and, apparently, is ready for a new chellenge.

In an interview, Marat said that it was his father who had signed him up for hockey. He was not a professional player, but played at an amateur level. Khusnutdinov became a Belye Medvedi school trainee, where Gennady Kurdin worked, he had coached Nikita Kucherov and Nikita Gusev. Later, the coach moved to the Vityaz school and offered his most talented trainees to join him there.

Khusnutdinov said: “He looks at everything down to the last detail. The best coach. I’ve gone all the way together with him, from the age of five to graduation. Even if we win and everything is fine, he will tell you at what moments you played wrong, because you need to improve every game. Gennady Gennadievich was making us better every day.”

In another interview, the SKA center recalled: “Gennady Gennadievich fiddled around with us a lot, there were enough game exercises. I am grateful to him. Now I can make non-standard decisions in different situations.”

The experience of the star trainees of the school also helped: Kurdin was showing how Gusev plays when his team in on a power play. He used Kucherov as an example of how to act in this or that situation. Moreover, Kucherov, Gusev and Ozhiganov used to visit the school after a season was over. “They skated with us, talked with Gennady Gennadievich,” Khusnutdinov said. The forward himself prefers Kucherov among the star trainees of Kurdin.

Khusnutdinov did not play a single game for the main Vityaz, but moved to SKA in 2019. The general manager of the club, Igor Varitsky, then said that the player himself wanted to develop in the St. Petersburg club, it was his desire, which was hard to stand against.

A year later, Khusnutdinov got an opportunity to prove himself at the highest level - in the coronavirus season, many St. Petersburg young players made their debut for the main team. Marat looked solid playing those debut games, had no fear of battles and was creative. But it was very difficult to become a full-time player of SKA right away, Khusnutdinov played for SKA-Neva and SKA-1946.

At the World Junior Championship, he was a first liner of the Igor Larionov’s team most of the time, but played wing for a while. “Igor Nikolaevich said that there is a big plus when two centers play on the same line – both I and Fedya Svechkov could support the defence when such a need arose. At first, it seemed strange, of course, but I got used to it,” the player said after the WJC.

“An explosive skater, this is the core of Khusnutdinov’s game. His ability to change speeds puts defenders on the back foot, allows him to cut to the net and fight through checks. Khusnutdinov’s excellent speed can also create breakaway opportunities. He can make plays while moving at top speed. He also has a strong arsenal of shots. His shot is both powerful and accurate. Khusnutdinov effectively supports the defence, he reads the play well and uses his active stick to cut down passing lanes. He also comes down low to support his teammates” – says the scouting report published on Last Word on Sports website.

“There is a ton to love about Khusnutdinov, but his biggest takeaway might just be his compete level. If he has the puck, he’s aggressive, forcing his way to the net or to an open spot. Without the puck, he’s on a mission to get it back. He plays hard at both ends, blocking pucks, and his forechecking might be among the best in this class. He might not look like the most intimidating player, but he’s deceptively strong for his size. He can often win board battles with his strong legs.”– says The Hockey Writers website.

At the 2020/2021 WJC, Khusnutdinov was wearing the “C”. The effective offensive line with Nikita Chibrikov and Fyodor Svechkov was supposed to be one of the most noteworthy Russian team’s lines of recent years, but the tournament was cancelled part way through the group stage due to concerns surrounding the coronavirus.

Khusnutdinov spent the entire playoffs with SKA and averaged 12 minutes per night. In the spring of 2022, he returned to the JHL for the first time in a long while to help SKA-1946 win the Kharlamov Cup. The forward himself became confused after being asked when he last played in the JHL: it emerged that a year and a half had passed. Marat became the captain right after his return and helped the team win the trophy, playing on the line with Matvei Michkov.

The head coach of SKA-1946 Vladimir Filatov said: “My opinion, which I do not impose on anyone, is that next season he will be up for wearing the “C” or the “A” playing for the main team. I have such a feeling. He’s got great leadership skills. A very team-first guy."

Marat played most of the preseason as the SKA captain, but Dmitrij Jaskin will be wearing the “C” during the season. That's to be expected for a more experienced and high-status player. However, Khusnutdinov's contract will be valid at least until April 2024, he will certainly have a chance to become the captain of the St. Petersburg team. 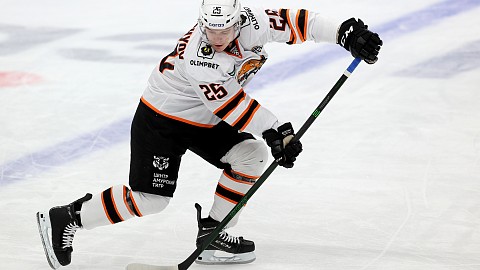