Kharlamov Cup MVP: Maxim Krovyakov got ahead of Michkov, loves dangles and is preparing for advancing to the senior level Kharlamov Cup MVP: Maxim Krovyakov got ahead of Michkov, loves dangles and is preparing for advancing to the senior level

The most valuable player of the JHL playoffs finished his junior hockey journey and is determined to make it into the main team of St. Petersburg.

Many Russian cities have famous hockey players to be proud of. Solnechnogorsk has a population of 48 thousand people - and two Olympic champions were born there - Spartak forward Viktor Shalimov and Krylya Sovetov goaltender Alexander Sidelnikov.

The achievements of Maxim Krovyakov are not so outstanding yet, but the SKA-1946 forward has already won the Kharlamov Cup, was recognized as the most valuable player of the playoffs and was called up to the experimental Russian national team. All these accomplishments are of a forward, who has never been on a roster of national U18 or junior teams and was always on the fringes. Where does such progress come from?

Krovyakov started his career in relatively low-key schools of Moscow region, until he joined the Vityaz system. Best minor hockey players from Podolsk often go to St. Petersburg. So Krovyakov ended up with U16 Varyagi, where he started moving up the tiers. He did not have to stay long with SKA-Varyagi - the forward joined the "senior" junior team of St. Petersburg rather quickly.

Krovyakov became the team's fifth best scorer in his first season with SKA-1946, but at that time the focus was on other talents. Autumn 2020 was the first proud moment for the forward. In those coronavirus days, SKA became one of the first teams to have many JHL guys playing for the main team. In a game against Sibir, the third and fourth lines were comprised of junior players. Krovyakov had nine minutes of ice time on the line with Ilya Ivantsov and Nikita Chibrikov, but did not score any points.

The peak of the forward’s junior career was a year later - during his third, last season in the JHL. Their trio with Dmitry Buchelnikov and Yegor Gurzanov became the most point-producing line of SKA-1946: according to InStat, these guys scored 41 goals during the season, and allowed only nine. “If you keep driving the net and creating chances, fortune will smile upon you: kind of a fluke and everything will work out. That was what we were trying to do - to be aggressive, drive the net, make many shots,” Krovyakov described the performance of his line after one of the regular season games.

Maxim’s style of play fits this description well. He is a big center (191/82), who has very good hands. He can not only take advantage of his size, keeping the puck away from an opponent, but also dangle on several opponents at once.

In addition, he uses his size to put the puck in the slot. Krovyakov can both score rebound goals and play well in the deep slot to create scoring opportunities for his partners, when all that is left for them to do is to score on an open net.

Taking faceoffs is an integral part of a center’s job. This component is sometimes a bottleneck for Russian forwards. However, the situation has been improving in recent years – Dmitry Katelevsky, for instance, is very good at faceoffs. Krovyakov won 55% of his faceoffs in the regular season.

And what do experts say about him? “Krovyakov skates well for his size, plays physical, and can really pick corners. He fills lanes and open spots, looking to shoot as much as possible in the offensive zone. He uses little movement fakes to get open at the right time for shots; he supports the play well in general. He anticipates where he has to go get the puck and advance it towards a scoring opportunity,” says a brief characteristic on EliteProspects website.

KHL TV commentator Anton Vasyatin summed up the triumphal playoffs: “One of the most consistent players of the 2021/2022 season. There was quite a number of new faces on the lineup and those were strong players, but Krovyakov was up there with everyone else. There was not a single game when he underachieved. The ability to battle, to make an accurate pass, to score workmanlike goals, to shoot from long distance and score - the forward has got the whole set of these skills.”

Krovyakov did not score any goals in the final series against Krasnaya Armiya, but he had seven assists in six games. Maxim became the team's top scorer in the playoffs (23 points in 17 games) and received his well-deserved MVP award, despite the competition from Matvei Michkov, who became the best goalscorer.

The forward is to start his senior hockey journey now. He was not made to move from one system to the other, as is sometimes the case with some talents torn among three leagues - Krovyakov was continuously developing with SKA-1946. But now everything will be different - both the size and the age of Maxim will no longer be an exclusive advantage.

The forward himself said the following: “I understand that things will get harder. I have to prove that I am ready for senior hockey. No one is going to give up his spot for me. I have to work even harder, approve myself, show my best hockey. And then the club management will decide where I will be playing and developing.” 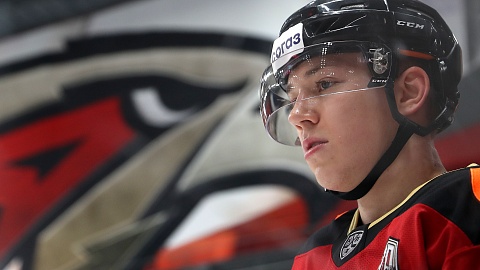