Was signed up for hockey at the age of three, was dressed as a goalie in an extreme situation and looks up to Datsyuk: take a closer look at the leader of Irbis and the hope of Ak Bars Was signed up for hockey at the age of three, was dressed as a goalie in an extreme situation and looks up to Datsyuk: take a closer look at the leader of Irbis and the hope of Ak Bars

Ak Bars have been calling up many young players in recent years. This was largely due to the coaching change: Zinetula Bilyaletdinov preferred veterans and made do with a relatively small core group, and Dmitry Kvartalnov’s system was different. His philosophy implies being active and applying constant pressure in the offensive zone – thus, rotation and young players with good conditioning are required.

Coached by Kvartalnov, Artyom Galimov and Dmitry Voronkov have become prominent players of the Kazan team, the latter has already won a Beijing 2022 silver medal. The club system has a new group of young players who are to be prepared for playing for the main team - and 19-year-old forward Dmitry Katelevsky distinguishes himself. 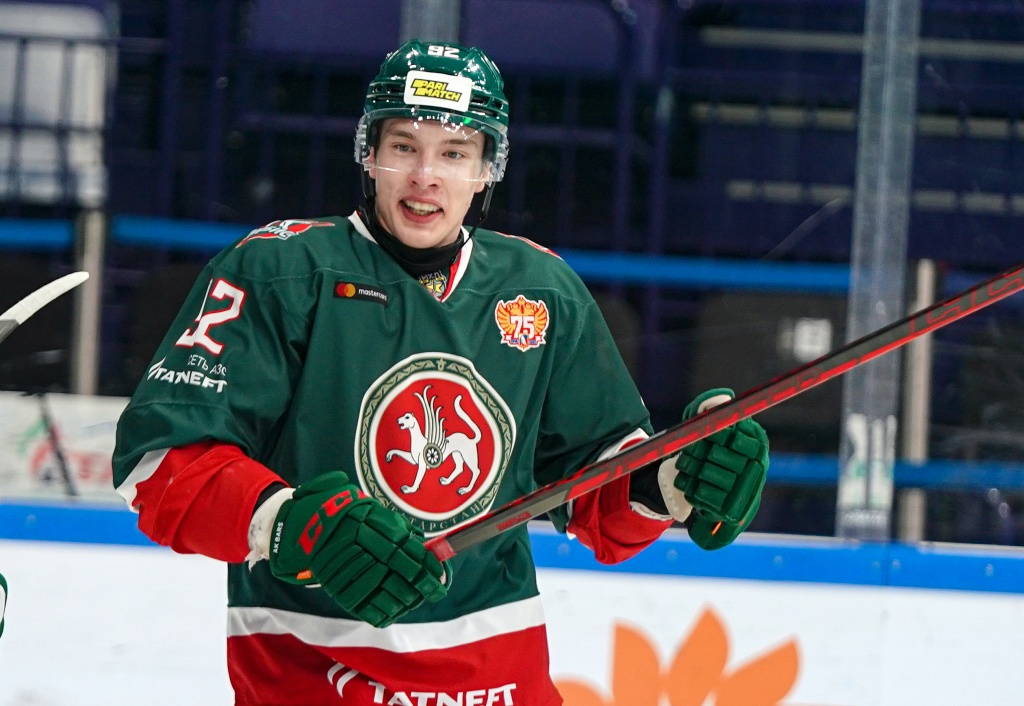 Katelevsky was born in Orenburg, which cannot be called a hockey city, unlike neighboring Orsk, where the local team has long been one of the most well attended teams in the Supreme Hockey League. Notably, Dmitry started playing hockey at the age when some kids don’t even start talking yet – he was three years old. “It is a great age for a child to start skating. By the age of five, you already gain skating confidence,” said Katelevsky in an interview with the SHL website. When Dmitry was seven, he moved to Kazan with his parents and started training with the Ak Bars school.

After the first JHL season, which Dmitry started as a 16-year-old teenager, he could join a SHL team right away. Even though, if we look only at statistics, his debut year might not seem very successful (18 points in 55 games, but the young forward averaged 15 minutes per night playing for Irbis – solid top 6 players get the same ice time).

Katelevsky started the new season with Bars in SHL. It was the autumn of 2020, when KHL clubs called up junior players due to quarantines. Katelevsky joined Ak Bars, despite the lack of experience in the senior league and his pretty small size. The young player appeared in one game – he played four minutes against Vityaz. 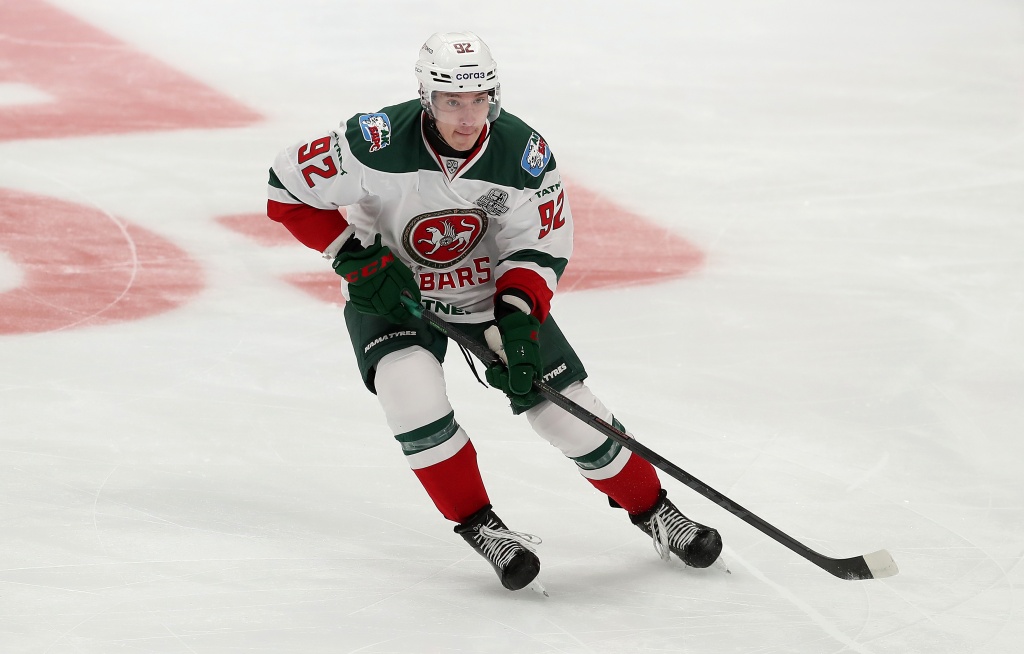 “Before the start of the game, I thought that the main thing was not to be afraid. If you have fear, nothing is going to work out. We had a friendly atmosphere, there were no negative vibes – you start feeling calmer in such conditions. That was what helped us beat Vityaz. Yes, I had -1 that night, it was my giveaway that started the opponent's goal-scoring attack. But the main thing is to win, and mistakes are to be analyzed after. There were no emotions from the coaches, no slap on the wrist, they just explained me how I should had played at that moment so as not to let them gain possession of the puck,” - the player said about his debut at the highest level in an interview with the KHL website.

In the 2020/2021 season, Katelevsky became a full-time player of Bars and performed quite successfully. At the end of 2020, he was recognized as the best rookie of the week in the SHL. The player mentioned that he had learned a lot from Alexander Khovanov, who was already a national junior team player by then. “I learn some skating and stick handling techniques from him. Plus, he has a nice shot"- the forward said in an interview. However, the career of Khovanov at the highest level is not going very well - he was sent to Bars that season because of being overweight.

After a successful year in the Supreme Hockey League, Katelevsky went to the World Junior Championship as a member of the most star-spangled Russian junior team of recent years. Due to high competition in the team with Michkov, Svechkov and Yurov, the forward of the Kazan system played almost the entire tournament on the fourth line and earned only one point – he scored a goal against the Czech Republic (11:1).

After the tournament, that was held in Texas, American experts in junior players turned their attention to Dmitry. “Yet today, Katelevsky plays a very pro-style of game - excellent work ethic on a consistent basis, smart decision-making both with and without the puck. Is incredibly impressive without the puck for a player his age, as he gets back defensively before the play does, knows where he needs to go, knows when he needs to apply some pressure and looks over his shoulders frequently to keep track of what’s happening around him.

Katelevsky understands the importance of coming back hard on the backcheck. Displays willingness to get his hands dirty. Will be a guy who wins a lot of pucks along the boards. He’s not an overly skilled player offensively in any way, but he’ll be a guy who occasionally finds ways to get the puck in high-danger areas” – says the Scouting Report of Future Considerations website.

Being an average-framed player (182 cm/79 kg), Katelevsky doesn’t try to avoid board battles or angling opponents – he won multiple puck battles against opponents of much larger size to keep control of the puck. As a true center, Dmitry is pretty good at finding a teammate with a pass and adapting to passes. In addition, Dmitry is really good at faceoffs, which is often a bottleneck for our centers - at the age of 20, he won 57% of his faceoffs in SHL regular season games, and this year in Kharlamov Cup playoffs his success rate was 63%. 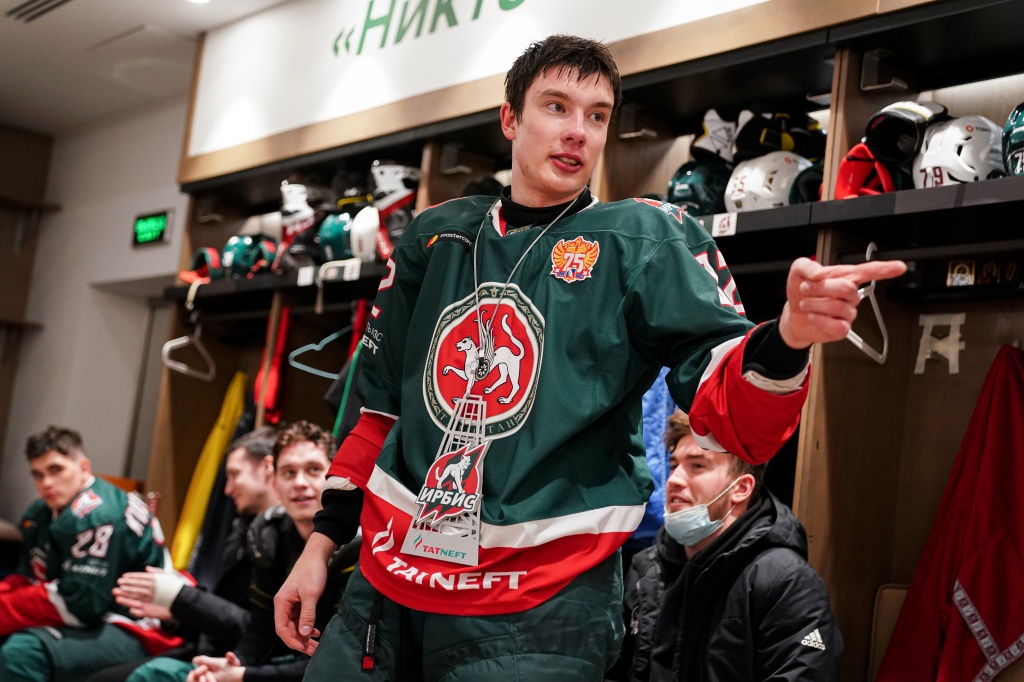 In the 2021/2022 season, the coronavirus, that gave Katelevsky the opportunity to make an early KHL debut in 2020, also made him a netminder. Helsinki Health Authorities prohibited several Ak Bars players from playing due to low antibody level - two out of the three goaltenders who went on the road were among them. The young forward had to be dressed as the backup goalie.

“Frankly speaking, I was up to it, because we needed to somehow solve the situation. For me, the main thing was to help my team win that game. The first shot on goal during the pre-game skate was a hard one. I got scared, even closed my eyes.” – Katelevsky said. Ak Bars goalie coach Jaakko Valkama said that Dmitry's appearance on the ice was unrealistic, but noted: “I liked the way he reacted to that situation. He is young, but he did not panic, did not whine, he agreed to help his team and was pretty good during pre-game skate.”

Katelevsky continued to play in the Supreme Hockey League and averaged 17 minutes per night, but there was no great improvement of his production. It is important to bear in mind that SHL is a tough grinders’ league with low production, in addition, Bars had an unsuccessful season in general, which ended with the head coach being fired.

The coaching staff of the main team appreciated the level of Katelevsky by calling him up to play against one of the toughest and most troublesome rivals in KHL – Avangard, coached by Bob Hartley. Although the young forward was not getting much ice time, he managed to score his first KHL goal, a tying goal in Game 5. “When we scored to Avangard, it was after a nice zone entry and Zhuravlyov firing a shot on goal. We were told to play that way, because the goalie played with his stick, and there could be a chance to get to a rebound in the slot. After the game, Danis Zaripov gave me the puck and wished to keep up the good work,” the player commented on his goal.

Katelevsky spent the end of the season in JHL and his goals helped Irbis reach the semi-finals - however, he didn’t manage to score any goals afterwards. The forward can start the next season in SHL, establishing himself as a leader of updated Bars together with other plyers of the club system.

The forward looks up to Pavel Datsyuk, who is also known for handling the defensive aspects of the game and being good at taking faceoffs. The Magic Man took a decisive step in his development being a part of Ak Bars system - perhaps Katelevsky will be able to follow in his footsteps.