Arseny Gritsyuk is the top rookie of the KHL season Gritsyuk Arseny
News
“I am of the same “slow ship” style as my father.” Maxim Mayorov – about moving to Yaroslavl, national team debut and passion for tennis
“I bought a cake and gave flowers to my mom with my first paycheck.” Yaroslav Tsulygin – about his JHL debut with Tolpar
Was signed up for hockey at the age of three, was dressed as a goalie in an extreme situation and looks up to Datsyuk: take a closer look at the leader of Irbis and the hope of Ak Bars
Edgar Varagyan: “When we were on the plane, guys told me: “He is an enforcer, he would beat you up with no sweat.” I thought: things happen, he would beat me up and so what?”
“As time goes by, taking a flight to Sakhalin feels almost like being stuck in Moscow traffic.” Daniil Veremeichik – the JHL's Best Player on Social Media
“Working out in a gym is a type of rest for me.” Ivan Murashov had the best season of his career, dreams of playing in the KHL and has not eaten any fast food for two years
“Condensed milk is the only unhealthy food available for the national team.” Raul Yakupov – about the Black Sea Cup, the KHL debut and the season with Reaktor
“Four years in the JHL was a great time. Winning the Cup with Dynamo was the best moment.” Ivan Didkovsky about junior phase of his career
Share

Arseny Gritsyuk is the top rookie of the KHL season

The Omskie Yastreby alumnus finished the season as the first-line player of Avangard.

Arseny Gritsyuk picked up Alexei Cherepanov Rookie of the Year Award at the closing ceremony of the 2021/2022 KHL season held on May 19. The winner in this nomination was determined by voting of the coaches of the clubs.
It was a breakthrough season for the 21-year-old player. The forward scored 38 (22+16) points in 52 regular season games, became the top goalscorer and the second top scorer of Avangard. By the end of the season, he was a first-line player and played on the 1st powerplay unit. Gritsyuk was named the rookie of the month twice. At the Beijing Olympic Games, the forward scored the winner to cap off an eight-round shootout and put the Russian team into the men's hockey final.

Gritsyuk scored 10 (6+4) points in 13 Gagarin Cup playoff games. Avangard reached the Eastern Conference Semifinals and got eliminated by Metallurg Magnitogorsk in Game 7. With two goals scored by Gritsyuk, Avangard forced a Game 7 of the series.
Gritsyuk made his JHL debut in the 2018/2019 season. In total, he appeared in 107 games for Omskie Yastreby, scored 49 goals and was credited with 51 assists (100 points). He made his debut on the senior level in the 2019/2020 season by playing 2 VHL games for Izhstal. The following season, he played 15 games for Avangard (including three playoff games), scored 2 (1+1) points and won the Gagarin Cup.
15 KHL head coaches out of 24 voted for Gritsyuk to be announced the top rookie of the 2021/2022 season. 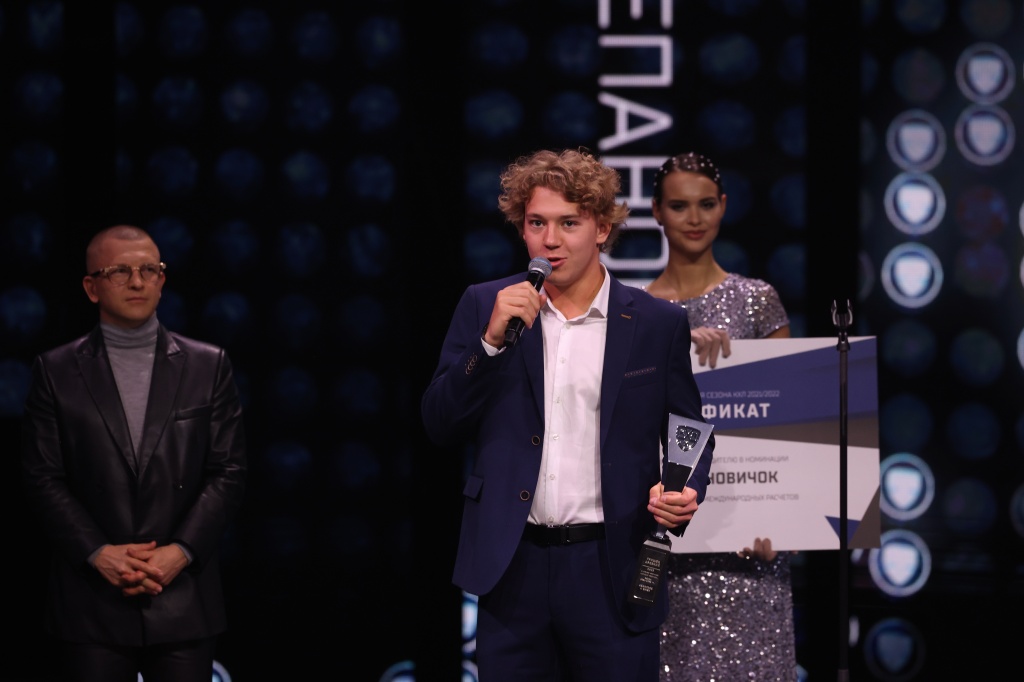 Arseny Gritsyuk, Avangard forward:
– I am glad to be here today. I am grateful to my family and my team for me being able to win this prize. The League has done much this season, it supported and helped us in difficult situations. Thank you all!