Irbis
News
Yaroslav Likhachyov – Most Valuable Player, Khasanov – Best Coach. 2021/2022 MHL award-winners
Maxim Krovyakov – 2021/2022 Playoffs Most Valuable Player
SKA-1946 win first championship in their history! Michkov scores game winning lacrosse-style goal
Krasnaya Armiya vs SKA-1946 in the finals! JHL deciding games schedule
“I’ll try to make it to the senior team.” Yaroslav Likhachyov finished his JHL career with a team’s record
The talent of the CSKA system rocks in the JHL playoffs. Agatha Christie helps Prokhor Poltapov prepare for games
“It’s a shame that three years in the JHL flew by so fast” – Matvei Kokovin lost a bet to Alexei Shevchenko as the White Bears failed to qualify to the playoffs
“I gave myself a choice: either to get stronger and move on, or to quit hockey” – SKA-1946’s leader talks about his season, social media, and hockey life
Share

Vyacheslav Peksa, the 19-year-old Irbis goalie, is the JHL leader in save percentage (93.7 per game) and shutouts (9). He is also among the top three goalie in goals-against average (1.79). His numbers are even more impressive if considering that at the beginning of the season, the Kazan side was at the bottom of the standings, suffering eight straight losses. The team managed to overcome its crisis, began to score, and was back on the right side of the playoffs line by December. After 56 games, Irbis sits in sixth place with 72 points and a chance to climb even higher.

In the new issue of Zoom JHL, Daniil Kolyshev spoke with Vyacheslav Peksa about his late entrance into hockey, his critical rival in the JHL, Yegor Guskov’s record of 13 shutouts, the origin of his unusual last name, and his prospects in pro hockey.

Differently from other goalies, Peksa wears the #1 uniform for Irbis. “At the preseason training camp, during a first-team practice, an administrator came up and told me that I needed to change my number,” the goalie explains. “I was wearing the #20, and it was taken by Steven Kampfer. I talked to him afterwards, he said he had a son born on the 20th, so he always tries to play under that number. Amir Miftakhov had left the team by that time and the number was vacant. And I think that I should keep on wearing the #1.”

The goalie was born in Magnitogorsk on Aug 27, 2002. The up and rising netminder started playing in the Southern Urals popular hockey town. “I first stood on goal when I was 11 years old,” he recalls. “By hockey standards, that’s very late, but that’s how it happened. I don’t know whether I couldn’t make it into the lineup or whether there was some other reason. I decided to move, I chose Kazan, but I didn’t get into Ak Bars right away either. I first moved alone – it was like that for two months.”

“I just tried everything: basketball, judo, swimming, acrobatics. After all that, when I was ten, I wanted to play hockey. I tried to become a skater, but I liked goaltending better. Then, our coach said: ‘we can get something out of him.’ 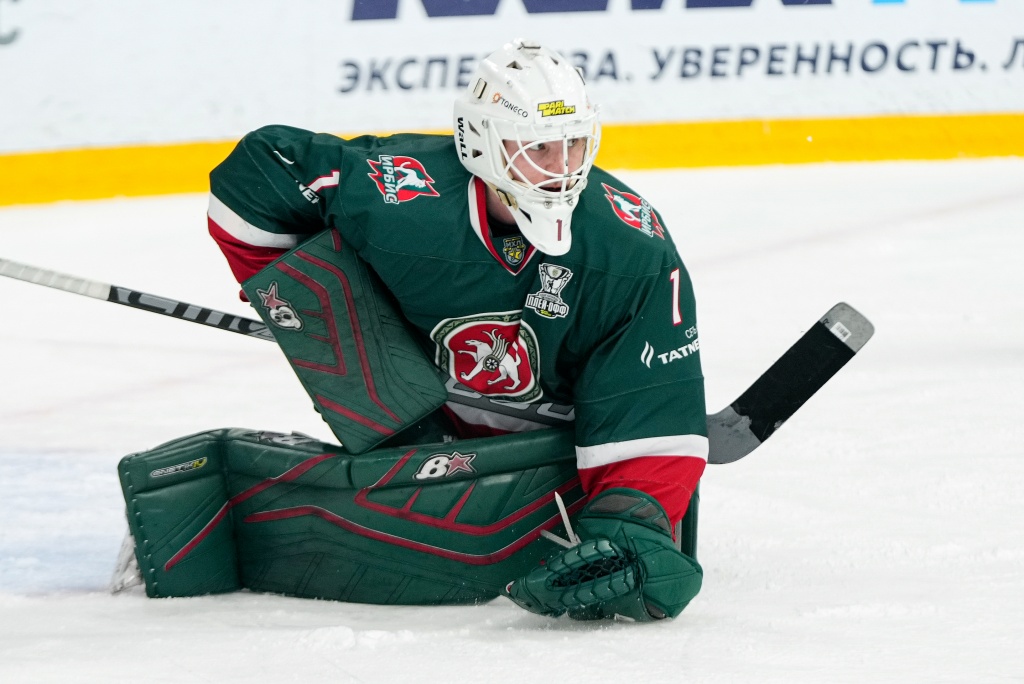 The goalie is in its second full-time season in the JHL. Last year, he played 18 games for Irbis. “That season there was a lot of unstable play on my part,” he admits. “I don’t know what it had to do with it. Maybe I wasn’t confident enough, I didn’t play much, I had no experience. I started to play a lot this season, and the coaches began to trust me. Thanks to that I got some stability. I can’t say that the 2020-2021 season was successful.”

However, the music changed this year. Peksa is among the leaders in most of goalkeeping stats. “When, for example, at the beginning of the season Irbis had eight losses in a row, I was pressured that I couldn’t perform at a decent level. Then everything stabilized, the team started winning, and I started looking at my numbers. Before that, I didn’t even try to look at them. Now it gives me even more motivation.”

He currently has 12 shutout games for Irbis. “I want to get even more,” he says. “When I had my first shutout, I thought, ‘What’s the record there?’ Then I remembered last season and was a little disappointed. It’s all real, but I want even more, if the team helps me. A lot of my credit this season is due to the team. I didn’t expect to be able to do that at all.”

Loko’s Yegor Guskov had 13 shutouts in 2020-2021. “Of course, I want to beat him. But it’s very hard. You look at him and understand how good he is. We have few games left, I’ll try to break the record, but I won’t make any predictions.”

However, other than Guskov, there are also other opponents that Peksa feels special. “This season, the games against Tolpar and Semyon Vyazovoy were quite crucial. The guy is pretty good for his age, he was born in 2003, but that’s just my assessment. I wanted to beat him all the time (Irbis won two games against Tolpar in Kazan, breaking their streak of eight losses – editor’s note).”

Despite his excellent play, Peksa is yet to play a game in the KHL or in the VHL. But this doesn’t seem to be a problem for the netminder. “Frankly speaking, I have my own goals and objectives for this season in the JHL,” he explains. “I want to achieve them, and the rest will come with time. Since the beginning of the season, I wanted to help Irbis make the playoffs, as the team is very young. All the guys want that very much.”

The goalie also has an unusual surname, that doesn’t even sound much Russian to many ears. “As a child and teenager, I tried to find an explanation to it,” he recalls. “My mother told me that the surname Peksa is like Ivanov in Russia. So, I don’t know the specific meaning.” However, a rapid search on Google says that in the Nizhny Novgorod region, the Peksa River stretches for some 20 kms. “I know about that river, but it’s not a concrete meaning. However, I promise I’ll take a bath there with the Kharlamov Cup, should we win it.”