Viktor Neuchev: “The JHL is a league for development and you shouldn’t be afraid of mistakes” Viktor Neuchev: “The JHL is a league for development and you shouldn’t be afraid of mistakes”

Neuchev is Avto’s offensive leader: he produced 20 points more than the second scorer of the team, Yegor Platonov. Viktor scored 14 power play tallies and eight game-winning goals. The forward is dangerous in any situation, no matter where he’s on the ice. He was born in Chelyabinsk, but now plays in the system of a major rival. In this interview, the forward talked about how he decided to become a hockey player and his attitude to comments in social networks, what is the reason for the team’s instability, as well as the rivalry between Yekaterinburg and Chelyabinsk and why the team nicknamed him ‘epileptic’.

“I didn’t have much of a choice: my dad brought me to hockey when I was three,” Neuchev starts his talk. “I didn’t realize what was going on at the time, but then I loved it. I was told that I started skating when I was very young, and then I smashed my lip and quit for a while. After that, I started doing it again.”

“I always played left and right winger; I never played in the middle. I also never wanted to be a goalkeeper,” he says laughing.

When he was young, he started watching at the KHL teams and players to get inspiration for his career “I liked Jokerit and Salavat Yulaev,” Nuchaev confirms. “They play offensive hockey, which is more interesting to watch. Among the players I like are Alexander Radulov, Vadim Shipachyov and Artemy Panarin. They are good playmakers, and they never overdo. I watch all the KHL highlights, I try to take something and then execute it on the ice. When you perform a sharp turn, you have to raise your head right away. I even wrote it down in my notebook, my dad made me do it. Before you take the puck, you have to see who to give it to, or who can shoot it.”

Neuchev’s father plays a big role into his current career. “He played hockey himself until he was 18,” he explains. “He has something to pass on to me. I worked with his coaches, they always told me he played better than me,” he laughs. “But already by the fourth grade I realized that I would either become a hockey player or go to a factory or be a cab driver.”

Despite being born in Chelyabinsk, Neuchev plays in Yekaterinburg now. The two cities are rival. “I played for Mechel, then we dropped out of the first group, so I joined Traktor,” the forward talks about his early career. “I skated there for two weeks, but I didn’t like it. When I came, there were some serious guys there. There was a lot of competition at Traktor, but the atmosphere was unhealthy. That’s how I realized I didn’t need it. I wouldn’t become a leader there right away, I had to prove it. There were a lot of options, but I decided to choose Yekaterinburg – it’s close to home, and everything is to my liking. You can play and develop in peace here.” 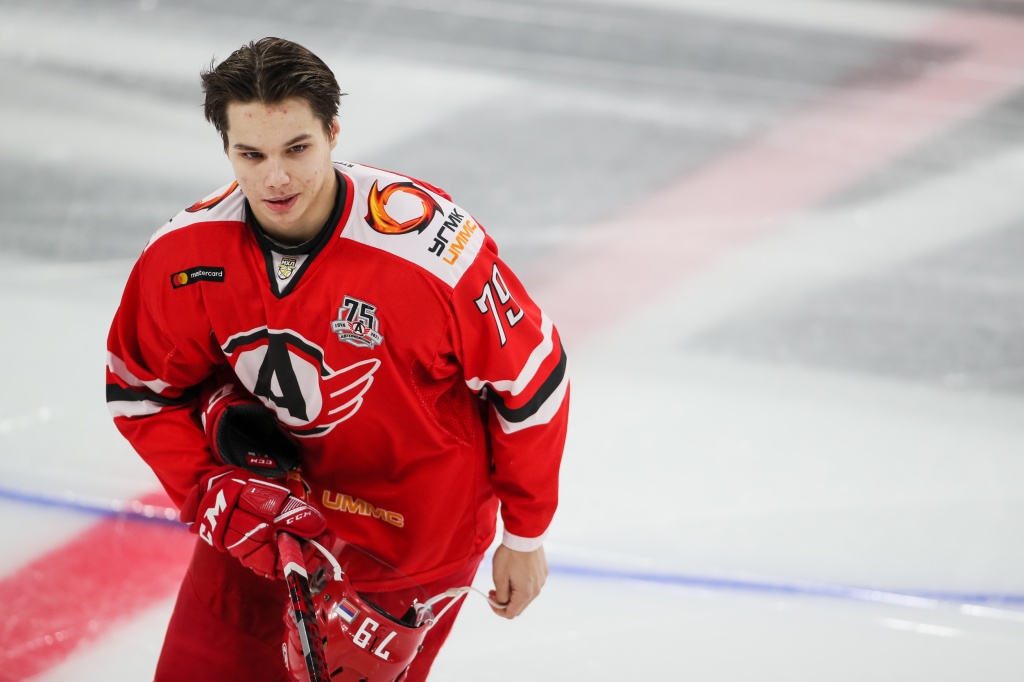 Avto is currently on the wrong part of the playoff line, after being up for a while. “We failed at the start, then we recovered, we were in third or fourth place and if we had taken our points, we would have stayed there”, Neuchev explains. “We lost two games to the Molot, then we lost to Omsk, then Molot again. We are in the place we have deserved. I don’t understand what it is all about. Halfway through the season we are doing well, but now we aren’t. The coaches give everything we need, but simply our game isn’t going in the right direction. But we still have a chance to make the playoffs. Sarmaty defeated Loko-76 twice, and we have even more chances. We just have to beat Yaroslavl and Ladya.” However, despite the hard time, the situation in the locker room is under control. “No one is nervous, everyone is battling trying to make things right. Avto has been consistently making the playoffs, so we have to work to play for the Kharlamov Cup. The team’s leaders gave us a goal to make it to the playoff and to pass one or two rounds. But it’s easy to understand that the management got us that goal, but we want to win the Kharlamov Cup.”

This year, Neuchev had his debut in both the VHL and the KHL. “Of course, in those leagues it’s harder,” the forward shares his views on the pro leagues. “In the KHL and VHL, everything is faster, physically more difficult; you’re playing against consummated pro players, so you have to show smart hockey. You need to understand these leagues, how to play there, and everything will be fine. I enjoyed a lot my time in the KHL, but I’m still raw to show something at this level. It takes time.” However, in the JHL there can be even more hits. “In this league, often players fly around. They run at you, but it’s easy to get away. In the KHL, out of the five minutes I played, I think I spent one minute on the ice. They play the body, and it doesn’t matter what you do. If you compare it with the VHL, in the KHL your partners are more experienced, they open up in time and give you the puck. In the VHL there is a lot of individual action, and I still lack experience in some areas. There is a big difference in terms of tactics: in the KHL you raise your head, and two partners are open at once.” In the JHL, it’s still easier for Neuchev. “I started playing in the JHL last season, in the first 20 games I didn’t score at all - I had six assists,” he recalls. “Then, in the next 25 games, I scored 26 points, I just realized I had to play my game and not be afraid to make mistakes. The JHL is a league for development. If you don’t develop here, where can you play? Before the season I set the goal to debut in the VHL and KHL.”

“My strengths are that I read the game very well. I can’t make the most of my chances: I get too nervous, I freak out. When you shoot a lot, but don’t score. Emotions get in the way on the one hand, but on the other, you get charged up with them. But then I rewatch the games and it is unpleasant from what I did in this or that situation. For example, how I broke my stick against the board. I don’t know why I do it, it’s just a state of mind. I hate losing since my childhood. I blame myself for almost all of my losses: I could have decided the outcome of the game, but I didn’t do it. After the losing twice to the Steel Foxes I had a day or two of recovery, then I realized that there would be a new day and I must avoid repeating my mistakes.”

Just as most of his peers, Neuchev likes playing videogames when he’s not scoring goals for Avto. “I enjoy computer games, that’s the fashion for everyone these days,” he confirms. “I play CS: GO. After my morning workout I come home. If I sleep, I won’t be able to sleep at night. But this way I play for an hour or two and then I can rest. They say that previously in the VHL players and coaches could go out for a smoke. But that’s not the case anymore. Hockey is changing: if a player has had a drink, he’s not ready for practice the next day.” 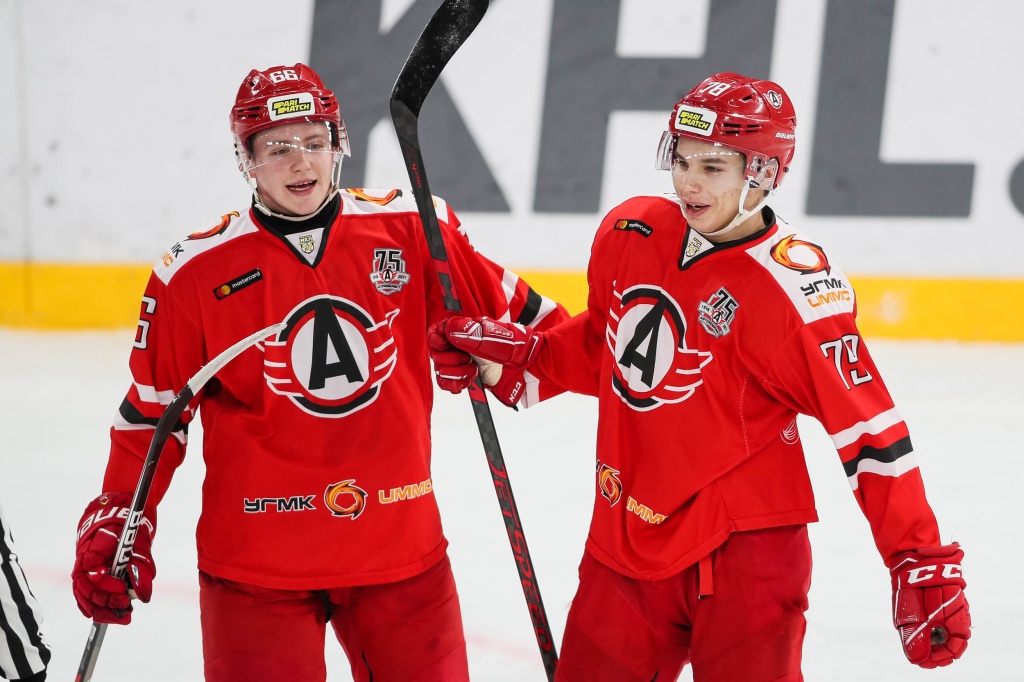 The forward also read comments on social networks. “Sometimes people congratulate with the players who score the most. They like to get something in return, so I try to answer. I like reading comments on the club’s social networks – I read them after every game,” he laughs. “I wonder what will happen there. If we played well, we are doing something wrong anyways. If we played bad – even worse. The team reads everything, sees everything, but we take it as humor. I remember, when I just came back from the KHL, there was a game with the Kuznetskie Medvedi in the evening. We lost then; I failed that game. Then I read a commentary: ‘Sharabarin (Kuznetskie Medvedi’s goalie – note) sent Neuchev and Blednov back to school’ – he laughs again. “Sometimes we like this kind of comments. But what’s the point of replying – when you look who’s there, there’s a fake page with no photos. Of course, the stars don’t notice it at all, but we’re not among them yet. So, we see everything.”

“In the team, I am usually called by my surname ‘Neuch’ – he explains. “Also, sometimes the staff jokingly calls me ‘Epileptic’ because of my emotionality.” But then, just as other young and promising players, Neuchev dreams big “I really want to buy a house for my mom, to have three cars. I got a little sister; I want to spoil her a bit. I didn’t have that when I was a kid, and I want that it will be different for her.”