VR-helmet, speed skating simulator, precision up to 0.001 of a second. Awesome technology at Your Chance Program

Back to the list
News
First game is on July 21st! Junior Hockey League pre-season games schedule
Junior Hockey League coaches earn national categories. Yaroslav Lyuzenkov is given the highest category
Rodion Amirov remains in Ufa. The forward finished the 2020-21 season on Tolpar
“I took a break from videogames and phone”. Ladiya Togliatti player spent a week offline up in the mountains
Belye Medvedi top-scorer to continue his career with Admiral Vladivostok
Former Belye Medvedi head-coach to join Traktor Chelyabinsk
“Many Tolpar alumni play in KHL, it motivates our players”. How is Salavat Yulaev major junior team going to look like this season?
“I didn’t want to play hockey after first few practices”. Tolpar Ufa captain want to play in KHL in upcoming season
Your Chance
VR-helmet, speed skating simulator, precision up to 0.001 of a second. Awesome technology at Your Chance Program
Share

Six exercise machines for hockey players you would be amazed by

Participants and coaches of Your Chance intense sports program, organized co-jointly by Junior Hockey League and Sirius Educational Center, noted in almost every interview their comfortable conditions. One of the aspects was the availability of various hockey exercise machines and tools of sports diagnostics, which are used for augmentation of practice effectivity. We present you the most exciting of them. 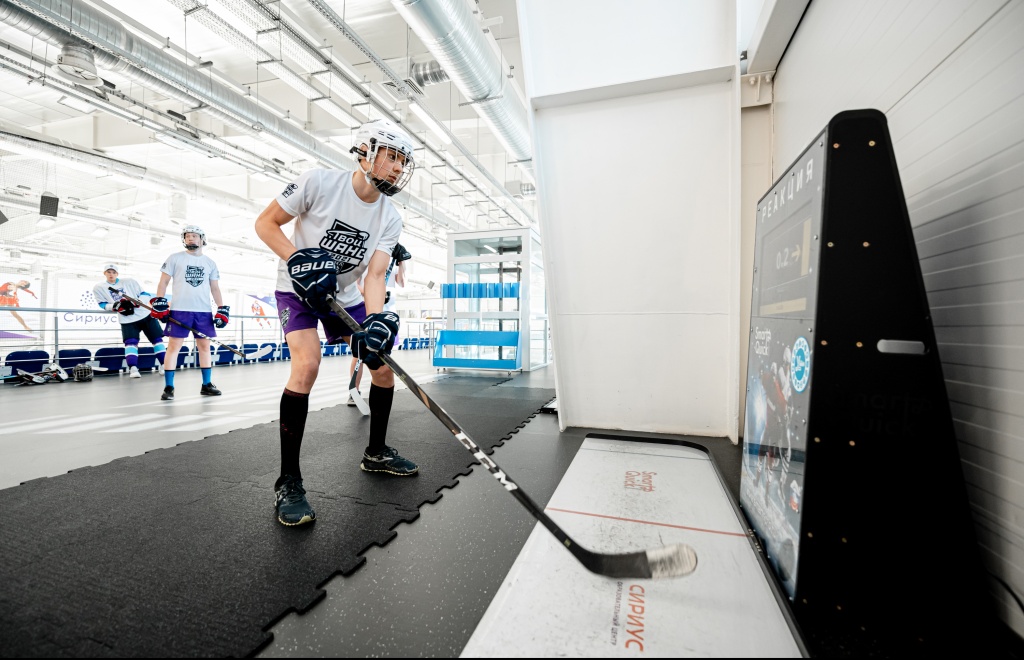 The exercise machine is able to precisely measure the speed of a hockey player’s reaction, which enables to improve stickhandling, dangling and periphery vision. Its modus operandi is simple – the puck is magnetic and the interactive sheet is divided into three parts. Hockey player begins controlling the puck in the neutral zone. Left and right buttons randomly light up, after which the hockey player has to move the puck into the respected zone. 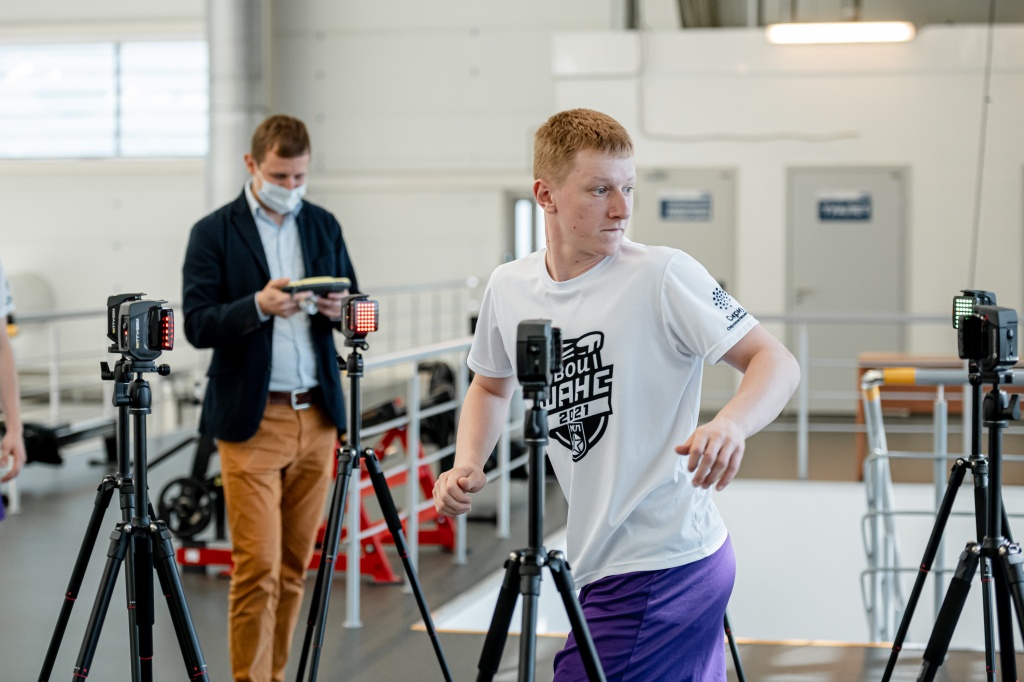 Reaction speed is vital in sports – especially for goaltenders. Hockey player is surrounded by LED-posts. The goal is to detect a certain color and react to it as fast as possible by reaching towards the respected sensor. The system measures not only the speed reaction itself but also the strategy of scanning the field chosen by the athlete to quickly react to the signal. The exercise machine improves the skill of effective usage of periphery vision as well as tactical thinking and focus concentration. 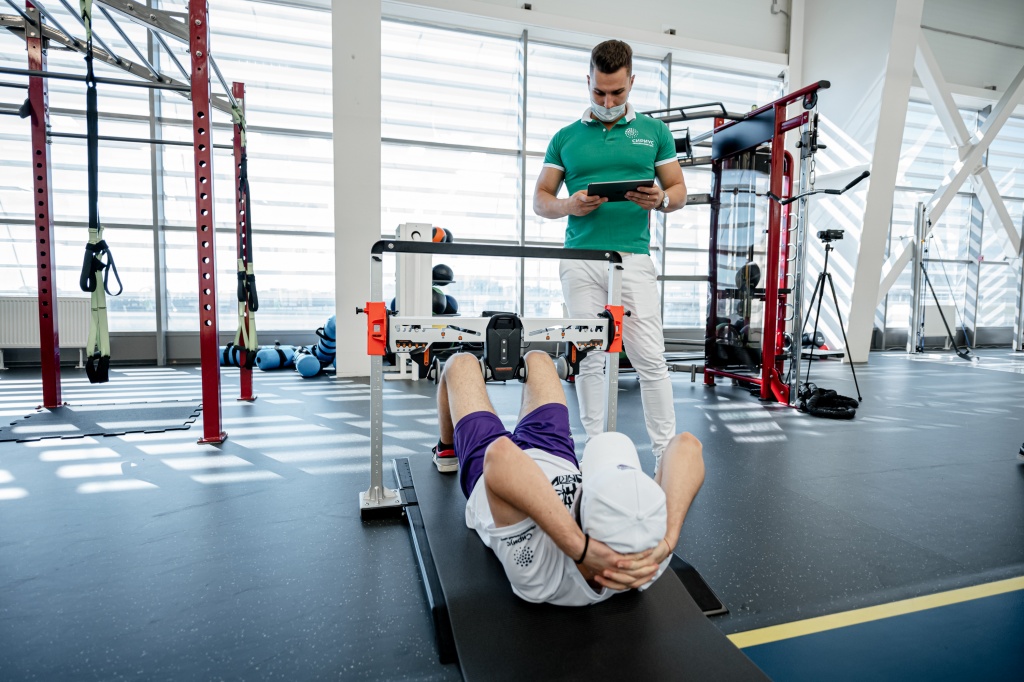 ForceFrame – is portative module system for power and various muscles group disbalance measurement. Correct functioning of Sartorius and hip muscles is important for hockey players. On this picture a Your Chance program participant is measured for the power of his adduct and abduct hip muscles. Strain gauge sensors measure peak results of power in Newtons for each leg. They are displayed at the tablet in real time. The graphic displays the measurement of power in time. If graphics for right and left legs match up, it means that the Your Chance program participant’s hip muscles function correct and balanced. 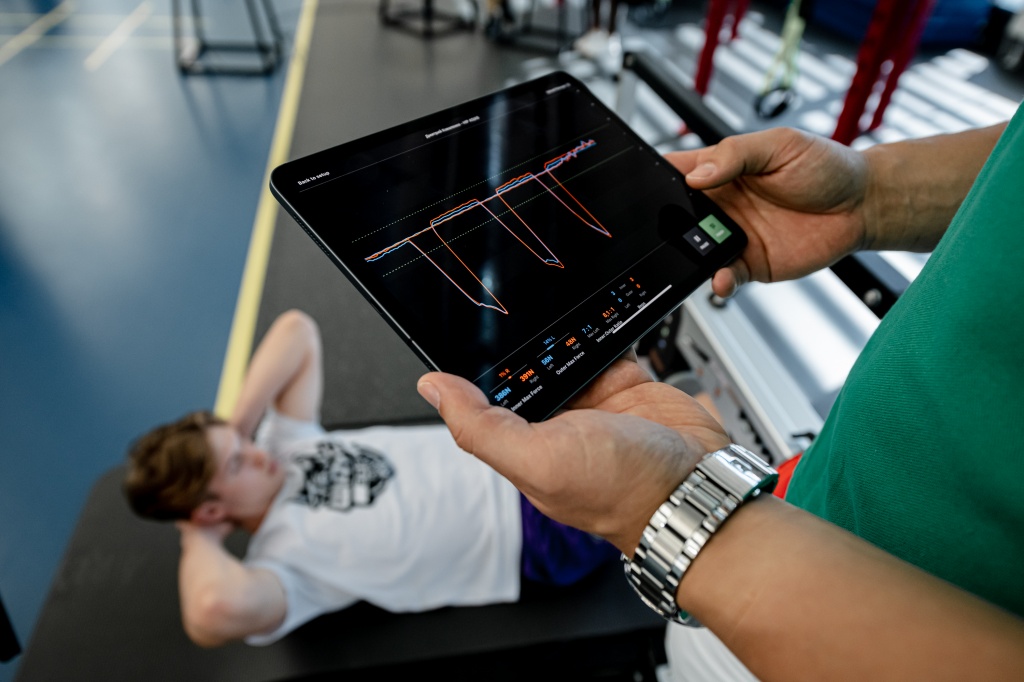 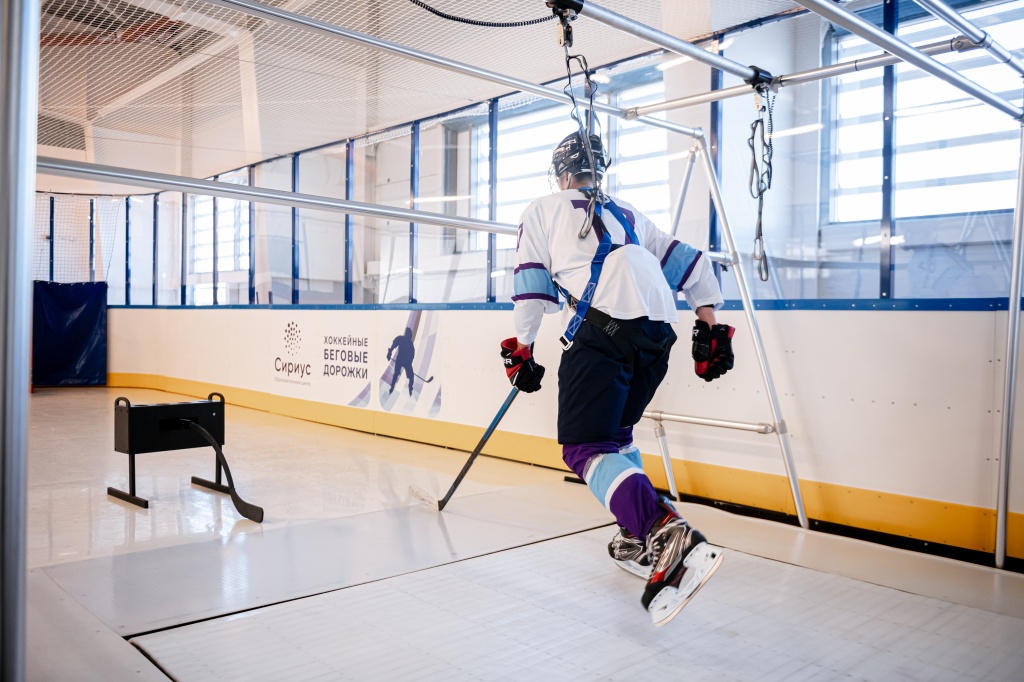 It’s an analog of treadmill from a regular gym but for designed specifically for hockey players. The players are equipped with straps, after which the treadmill is activated. The athlete glides on artificial surface, improving his skating skill. The speed of the treadmill is regulated depending on the hockey player’s skill. It can go faster or slower. The player’s safety is ensured by the straps. If the athlete loses his balance, the exercise machine doesn’t let him fall down and stops. Mechanical defenseman imitator is located in front of the hockey player. While skating up with the puck the player must beat the defenseman by sliding the puck under his stick, which is moving towards him. 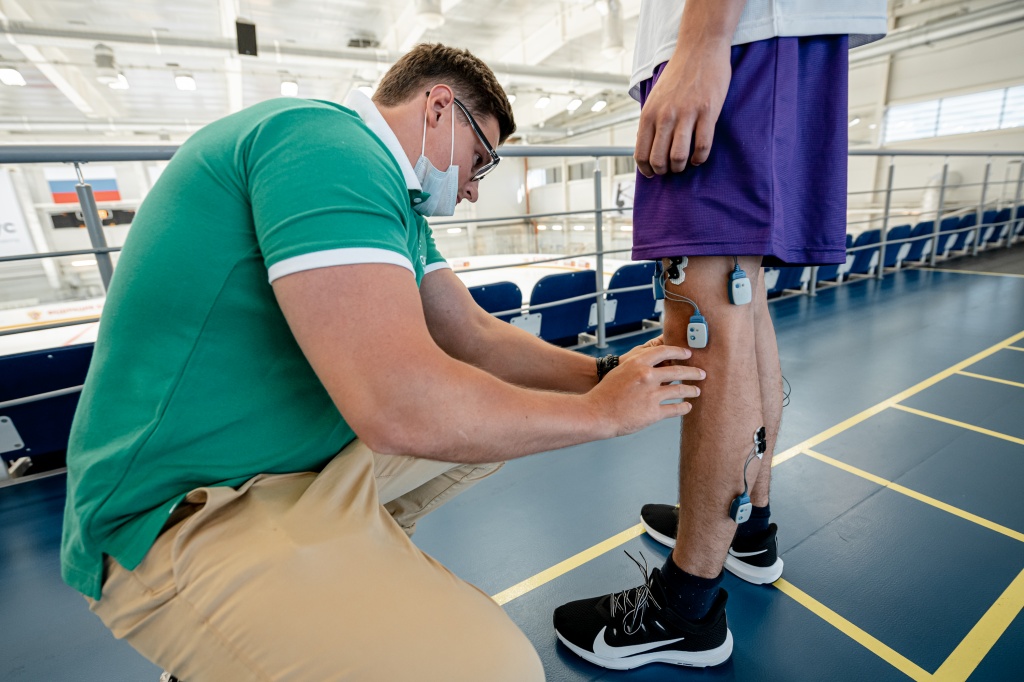 Program participants’ legs are equipped with several miniature sensors of electric activity. While squatting, the system registers function measurements for every muscles for every phase over the course of exercise. Data analysis allows to understand which muscles work weaker than others and what physical exercises should be focused on during practices. 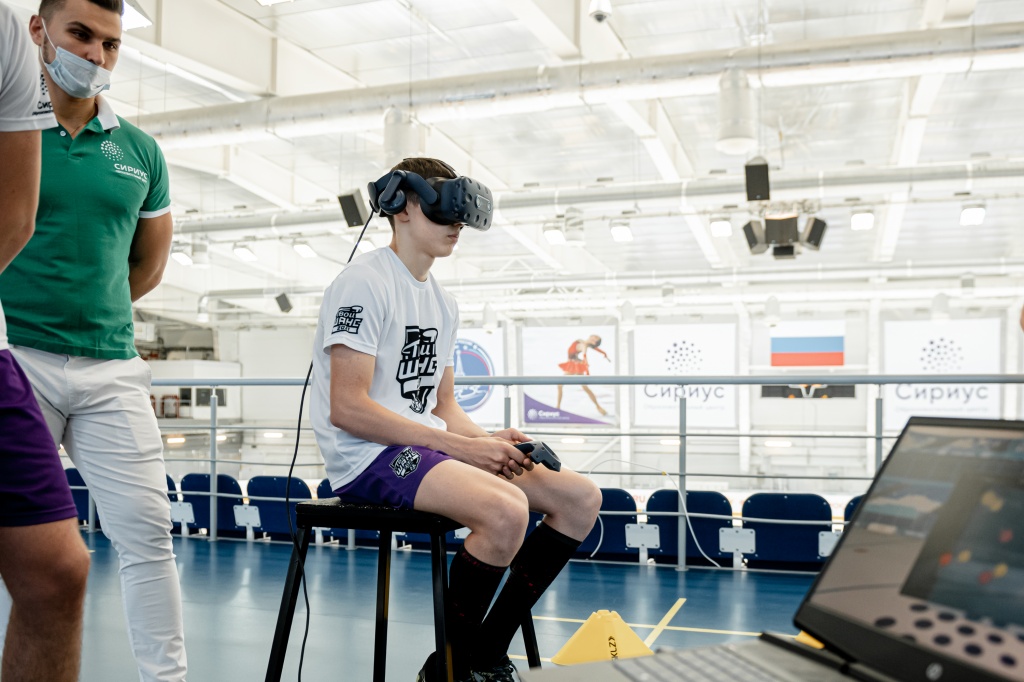 VR technology has also been used at Your Chance program. Focus concentration skill is measured by Sirin complex. VR-helmet is put on the athlete, who’s also given a gamepad. Hockey players went through two subsequent tests. First test – Tracking – consists of the player seeing four red balls and four yellow balls. The balls are constantly interchanging. At a certain point all of the balls change their color to yellow. The goal is to track those of the balls that were red in the beginning and then point them out using the gamepad. The better the Your Chance program participant is able to do at the test, the more difficult the test becomes as the balls begin to move faster and faster. The second test – Invisible One – has been designed for goaltenders. The entire display is filled with yellow balls, which move around chaotically and bounce off each other. The goal is to detect three invisible balls in 20 seconds and point them out using the gamepad by studying the movement of the balls on the screen. The Invisible One exercise is designed to test and improve the ability of players to locate the necessary object not directly but indirectly using oblique patterns, which is very important in game situations. 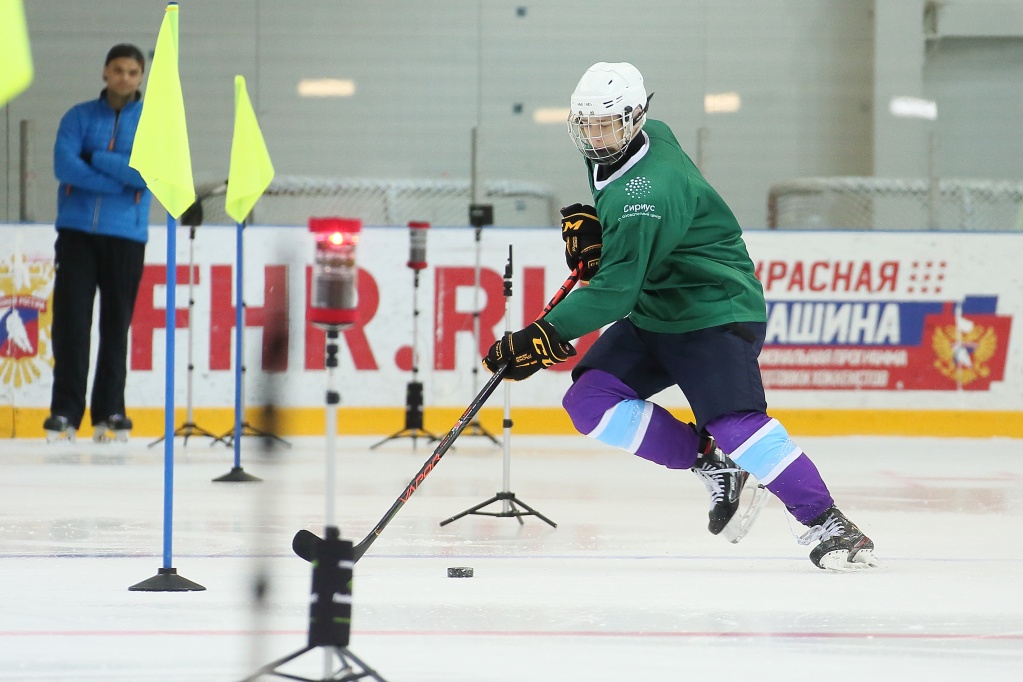 On June 18th all Your Chance program participants went through testing on ice. Smart Speed innovative system of timing allows to register results with the precision of up to 0.001 of a second. The tests were various – 30-meter sprint, skating forward and backwards, zigzagging around cones, shifting forwards and backwards diagonally while skating, etc. Smart Speed system allows to eliminate the human factor and register precise test information for program participants.