“Travelling with the team is for true fans only”. JHC Dynamo St. Petersburg fan opens up about a Junior Hockey League fan sector

“Travelling with the team is for true fans only”. JHC Dynamo St. Petersburg fan opens up about a Junior Hockey League fan sector

Georgy Yegorov, a JHC Dynamo St. Petersburg fan, talks about how the Junior Hockey League team fan sector came to be, his 49 road trips with the team, St. Petersburg fan traditions and weighs in on how difficult it is to support several teams within the same system all at once.

“Our fan sector at hockey games didn’t come to be out of sheer nothing,” tells Yegorov. “At first, I and everyone who was with me right from the beginning of building this fan sector, we all were Dynamo St. Petersburg soccer club fans. We followed closely every sports event around town. In 2013 we learned that Dynamo St. Petersburg hockey club was going to be brought back to life and the news really piqued our interest. Later on we found out that the team would compete in Junior Hockey League. The first game of the brought back to life team – and, obviously, my first game as well – was against JHC Molodaya Gvardiya Donetsk on September 3rd, 2013. It was a rather positive and emotional experience, even though our team lost 4-1. We were just glad to see another Dynamo team on the map. As for the outcome, the tide was going to turn eventually. As the matter of fact, our boys won the following game beating JHC Spartak Moscow 1-0.

“For the past several years I actually support more the hockey team but I would not go as far as calling myself just a hockey fan. As I have said before, the basis of our fan sector are people who support Dynamo St. Petersburg soccer team and Dynamo St. Petersburg volleyball team. We just want to see as many Dynamo teams in our region as possible. We want to see Dynamo sports make progress and we see it as our goal to support these teams.” 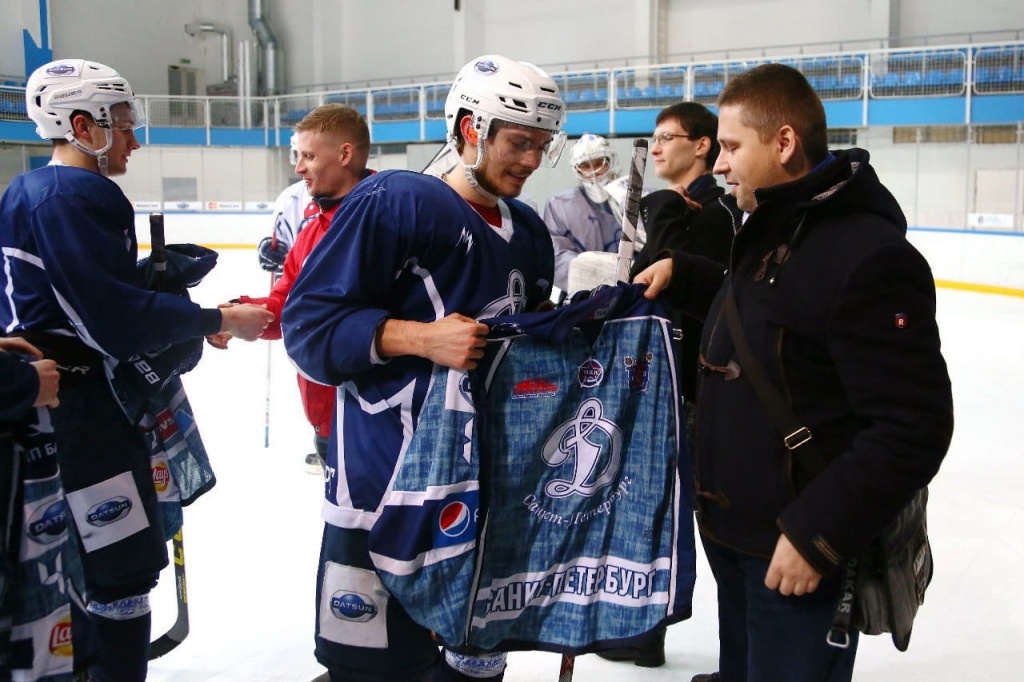 “We made a trip to Krasnodar in the 2014-15 season,” continues Yegorov. “Dynamo St. Petersburg faced local Berkuty Kubani. The core of their roster was up in the VHL at the time. There were about five of us, which by the standards of our fan sector was rather good, especially given the fact it was a pretty long road trip for us. I remember it as if it was yesterday. The plane tickets to and from Krasnodar were not that expensive so it didn’t take us long to make a decision. We just packed our bags and went. I remember the road trip for the city and the game itself, because Dynamo went on to win it, and local fans in the stands. It came a bit as a surprise for me that there were so many fans in Krasnodar for a Junior Hockey League game. Overall I have gone to 49 away games for Dynamo St. Petersburg to this date, of which 17 were for the Junior Hockey League team and 32 others for the VHL team. If I don’t have an opportunity to travel with the teams, I follow the games online – either on VHL or Junior Hockey League website. If I can’t do that either, than I just follow how the game goes on social media or the leagues’ official websites.”

“There isn’t and there has never been a specific fan sector for our Junior Hockey League team, that would be totally independent from our VHL team,” adds Yegorov. “It’s the same group of people. But it’s only logical that regular fans and those in the fan sector put more focus on our main team in VHL. It’s very problematic to pay close and equal attention to every team within Dynamo St. Petersburg club system as well as gather the same number of people at the fan sector for the main team and Junior Hockey League team due to reasons that are pretty obvious. There’s work, studies and family matters to consider. Obviously, we don’t forget about our junior team and we do our best to support the boys as much as we can at home games and on the road as well.

“I will also add that our fan sector has a certain set of rules. I’m not going to go over all of them but I will point out some key ones – you have to be vocal in supporting the team during the entire game regardless of the score; wear white clothes so it would be easy to spot you in the stands and wearing Dynamo St. Petersburg merchandise. We see vocal support as the only way to back the team as well as the drum because it’s a helpful tool for organizing. You can’t bring vuvuzelas and rattleboxes to our fan sector. They items are banned.”

1. Loyalty to the colors and name of your chosen team. You can’t consider yourself a fan if you support Dynamo today and then put on a scarf of another team and support it with the same passion.
2. You have to be active in vocally supporting your team at the fan sector and the ultras culture, which consists of creating on in-game performances, distributing stickers and graffiti as well as everything else that popularizes and promotes your team information-wise.
3. You have to actively go on road trips. It’s something that has be appreciated in all of times. A true fan is someone who has gone to over several hundred away games for his team. It’s pretty easy to support your team at home, but travelling with the team is for true fans only.