JHC Dynamo Msk
News
“The more you yell, the less they listen”. Yaroslav Lyuzenkov built a championship team, which had missed the playoffs for four straight years
“We got carried away and lost the momentum”. Miroshnichenko, Yurov and Leschyov comment on Team Russia’s first loss at U18 World Championship
“Plan B worked out”. Michkov, Chibrikov and Leschyov comment on Team Russia’s comeback against Team USA
JHC Dynamo Moscow wins Kharlamov Cup. Quotes from Krasnogorsk
“There was an offensive gesture from Dynamo’s side”. Loko comment on losing 4-1 and taking emotional penalties
“We are proud of our team”. Kazan managements weighs in on Irbis’ season
“What we saw wasn’t junior hockey but a men’s game with thought”. Kharlamov Cup Finals first games analysis
13 KHL players, shortened roster and focus on studying. HK Riga head-coach isn’t afraid of anything anymore
Playoffs
JHC Dynamo Moscow wins Kharlamov Cup. Quotes from Krasnogorsk
Share

JHC Dynamo Moscow defeated Loko Yaroslavl in Game of the finals and won Kharlamov Cup. What is happening right now in Krasnogorsk? We keep you informed in this updating article.

22-30. Loko forward Stepan Nikulin commented on the difficult game for his team and explained why Yaroslavl lost. 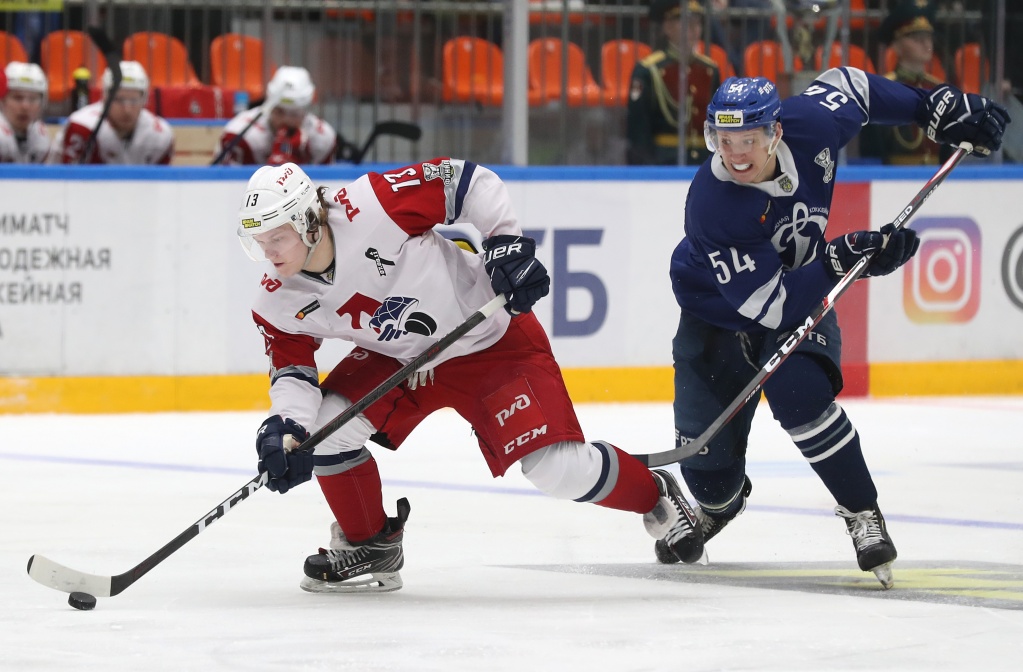 “Dynamo played their best hockey tonight, while we struggled in the back end, didn’t capitalize on our scoring chance and that’s why it ended for us that way,” said Nikulin. “We knew that Dynamo is a strong team. The most surprising thing was that they played as one monolith. All four of their lines worked hard as one and you can’t even single out any of them. It’s always tough to play against teams like that. I really want to thank the fans. I have never heard anything like that before. They constantly cheered and supported us. They battled tonight even harder than us. We have only ourselves to blame for giving the opposition chances to score on us. We created problems for ourselves and then did our best to fix that. We almost pulled it off but we were a bit unlucky. Dynamo is a very skilled team and that is why we couldn’t pull it off. During the timeout our coaching staff did their best to calm us down. They told us that nothing irreversible has happened yet and that we had a lot of time ahead of us. We had to stay united and just keep on playing. We did our best to pull ourselves together, we battled hard, we did our best and I have nothing to say against anyone on this team. Everyone did a great job. We lost but there are positives to take away from this. It was the first playoff run for a certain boys. It’s still a pretty good result and this experience will be useful for all of us.”

“It’s still a bit of a shock for me. I haven’t fully realized yet that we won. Most likely, I’m going to realize it only tomorrow morning and get their we won the championship. I don’t believe that Loko came into the series as a heavy favorite. We beat them in three games out of four in the regular season,” said Kisakov. “We came into the series with a mindset to dominate. It panned out to be a tough series. It seems a walk in the park only on paper. Every game was tough, it was tight and we just got lucky a few times. Every player on both teams is skilled. Everyone can play. That’s why the luck factor was so huge. Tonight we came out to win and we started to play aggressively in the offensive end right away. That’s why we scored two early goals. Nothing special was going on in the dressing-room prior to the third period. The coaches were just telling us to stay focused. First goals gave us confidence. We just had to play smart and get the win. I’m really thankful to our fans. It’s obviously a smaller rink but their support was very good.”

22-10. We got in touch with JHC Dynamo Moscow goaltender Vadim Zherenko, who was named thee Most Valubale Player of the 2021 Kharlamov Cup post-season. 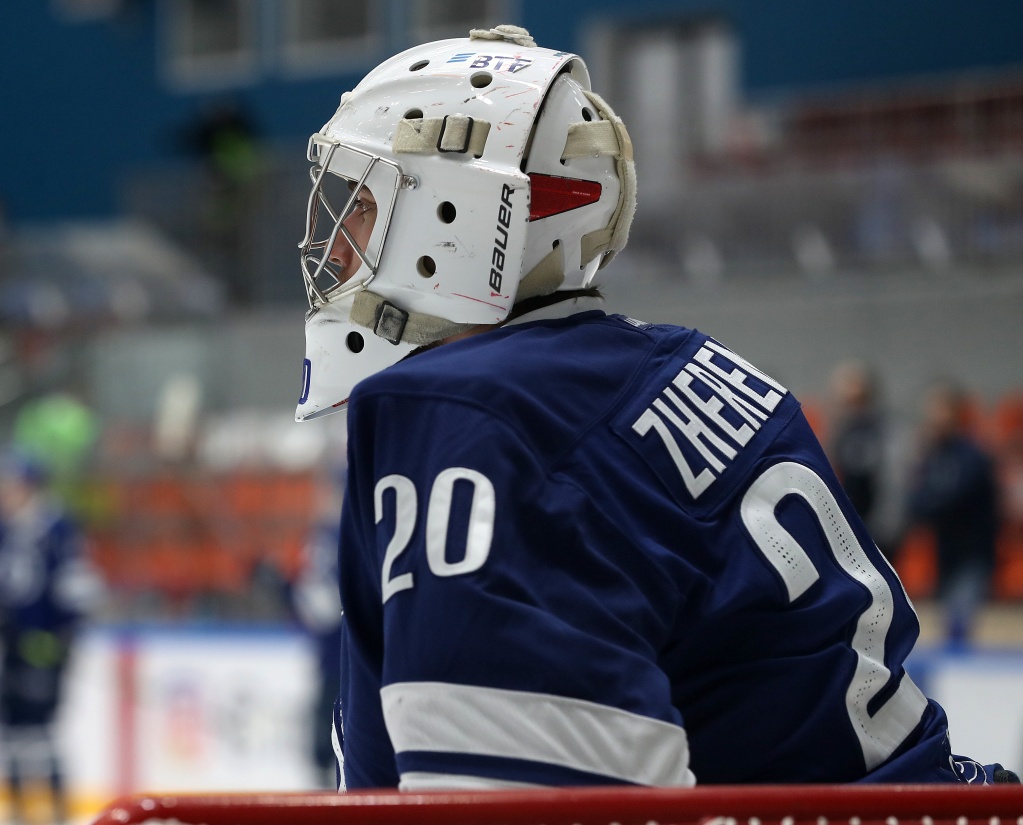 “It’s an indescribable feeling. I’m super-emotional right now. Although, I do feel a bit of a void inside,” said Zherenko. “The boys and I gave everything we had on the ice. I congratulate everyone with this win. Everyone did a great job. It’s really great that we managed to win Kharlamov Cup on the 75th anniversary of our hockey club. We gave a present to all of our fans and we made up for unfortunate seasons in VHL and KHL. As for being named the Most Valuable Players of the playoff, the whole team should be credited for that. If it weren’t for the boys, none of that would have been possible. The boys battled hard, blocked shots and I’m grateful for that. Goaltending factor is really important in the playoffs. You have to bail your team out and keep it in the game. You can’t do it night in and night out but that’s what you have to aim for. I believe the key moment of the series was Game 4. When we won our second game in Yaroslavl, we had just one more step left to make. After all, everything ended in Krasnogorsk and perhaps that’s the way it should have. We were feeling the opponent out in the first games and played with a lot of caution. Tonight we scored two goals and games like that are even tougher for goaltenders when the score is 0-0 because you have to stay focused and keep your head in the game, and keep telling your teammates they shouldn’t lose concentration. I can’t say we lost concentration tonight. Loko played well, they had their legs going for them and created a lot of scoring chances but the boys did a good job. We knew that we were up against a skilled team with a great roster. It’s great to see the series end the way it did.”

“We’re happy. Words cannot describe it. We’re really happy that we managed to win the first Kharlamov Cup in the history of Dynamo junior team,” said Makhrin. “We came into the season looking to win the cup and now that we have done it, I’m really happy. I believe, in the final series we were just the better team. We just outplayed the opposition. There’s no secret behind the win. I would like to point out [Roman] Abrosimov and [Stepan] Nikulin. Those guys are beasts. Every game was tough and we felt nervous coming into all of them. We didn’t put the emphasis on the fact they had [Yegor] Guskov in goal tonight. Loko’s backup also played really well. We came out pumped up right out of the gate, we got our legs working for us and we managed to get in the lead. Yaroslavl got close to us on the scoreboard but we didn’t lose concentration. We managed to pull ourselves together at the right time and get the win.” 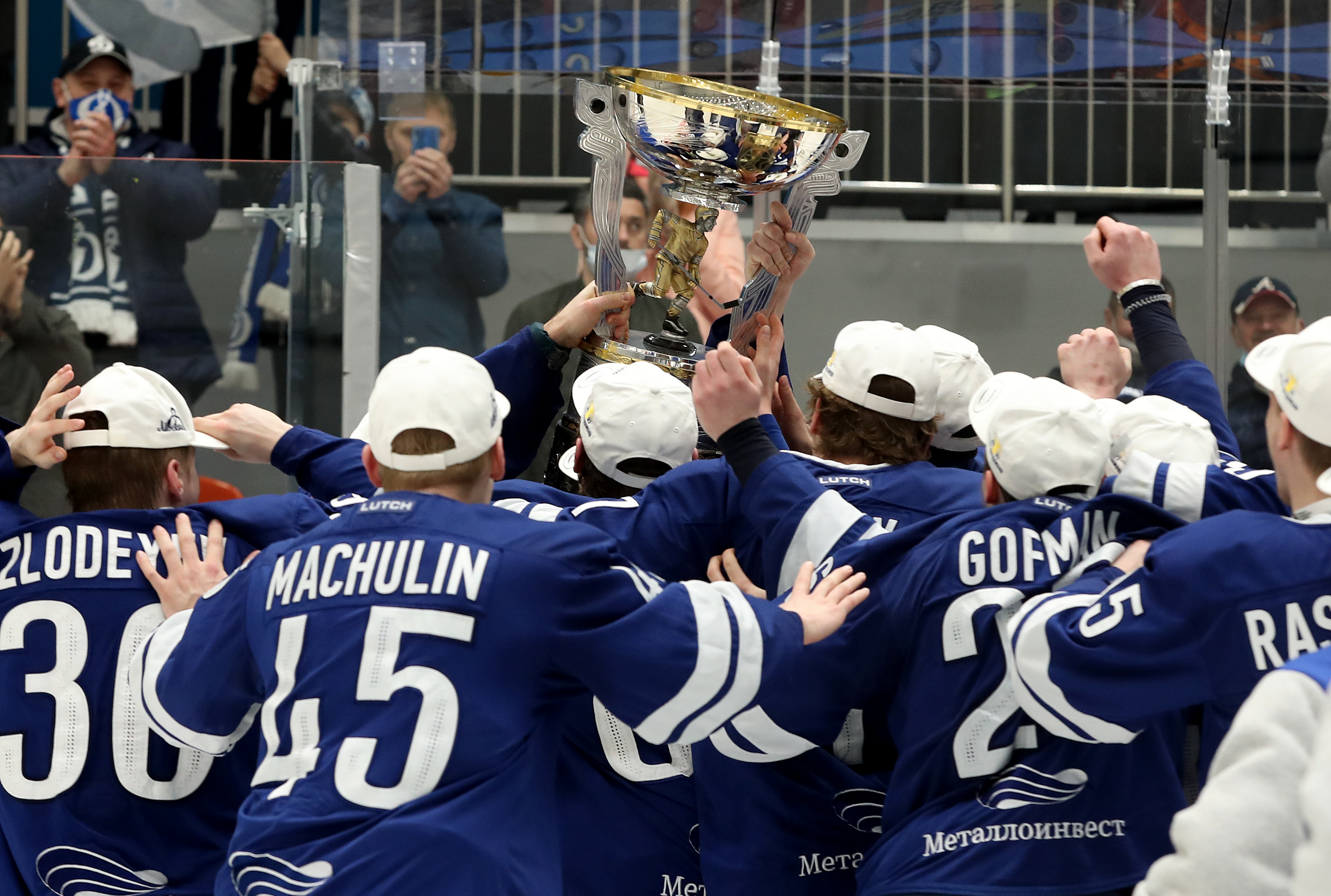 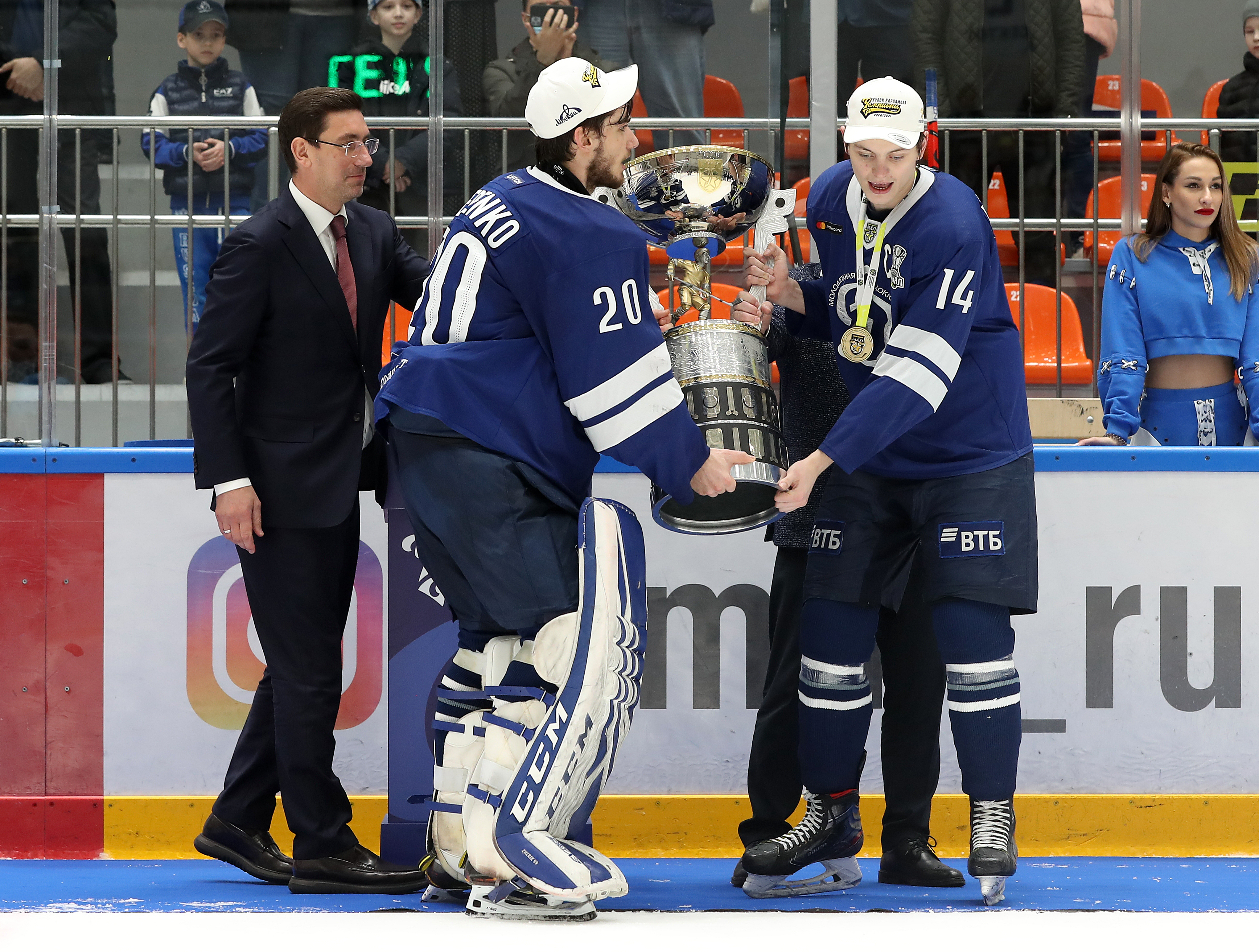 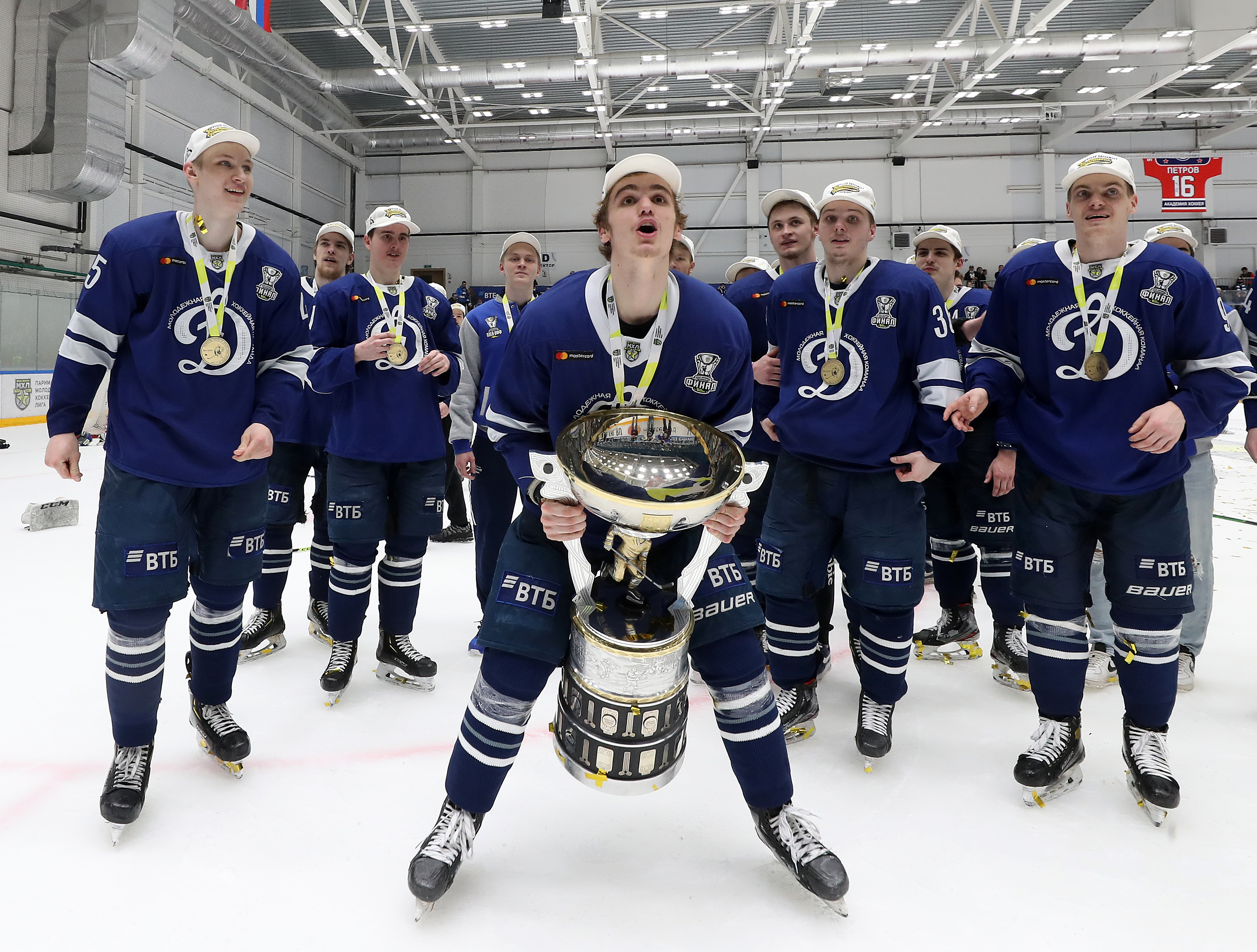 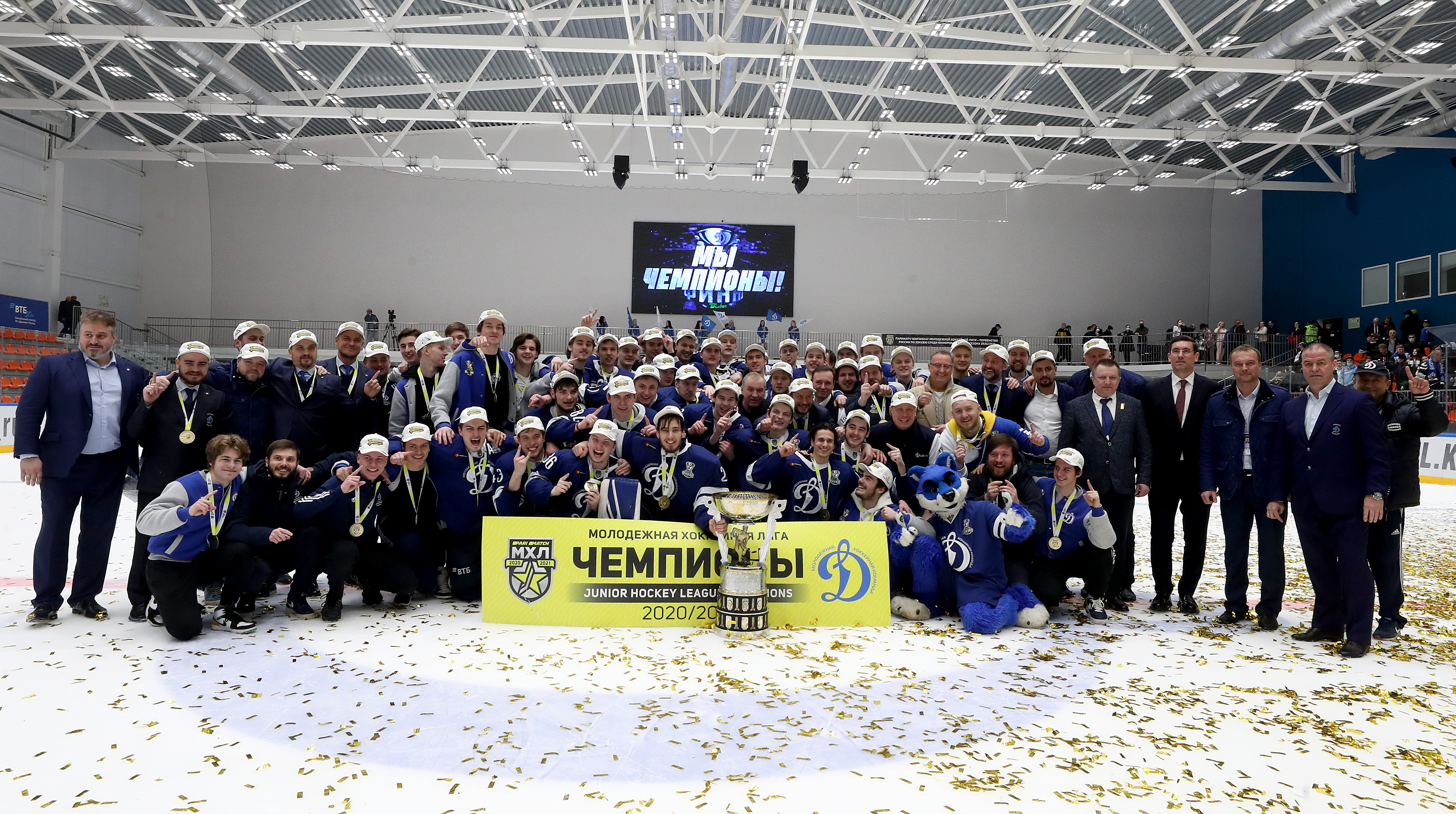 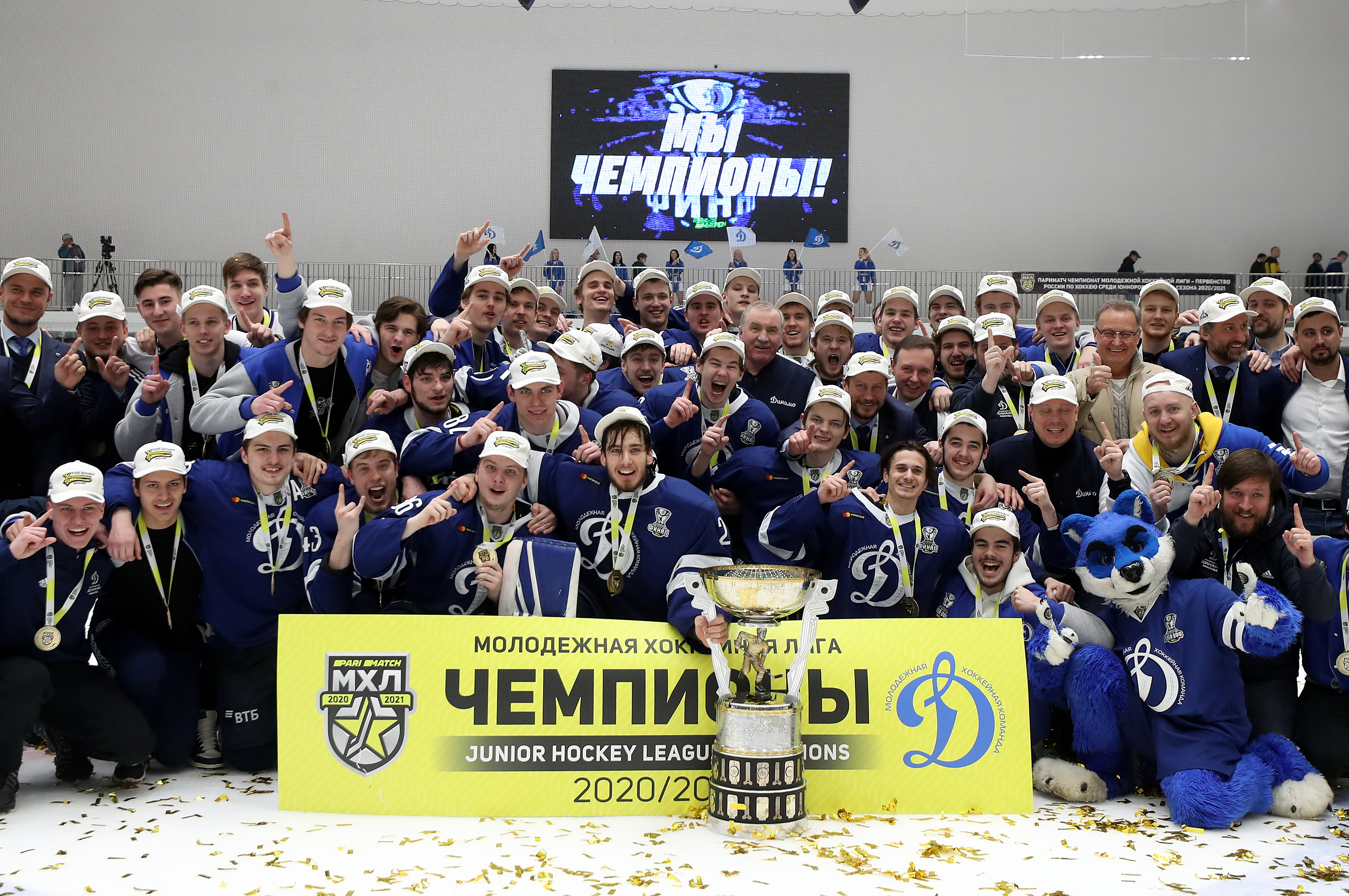 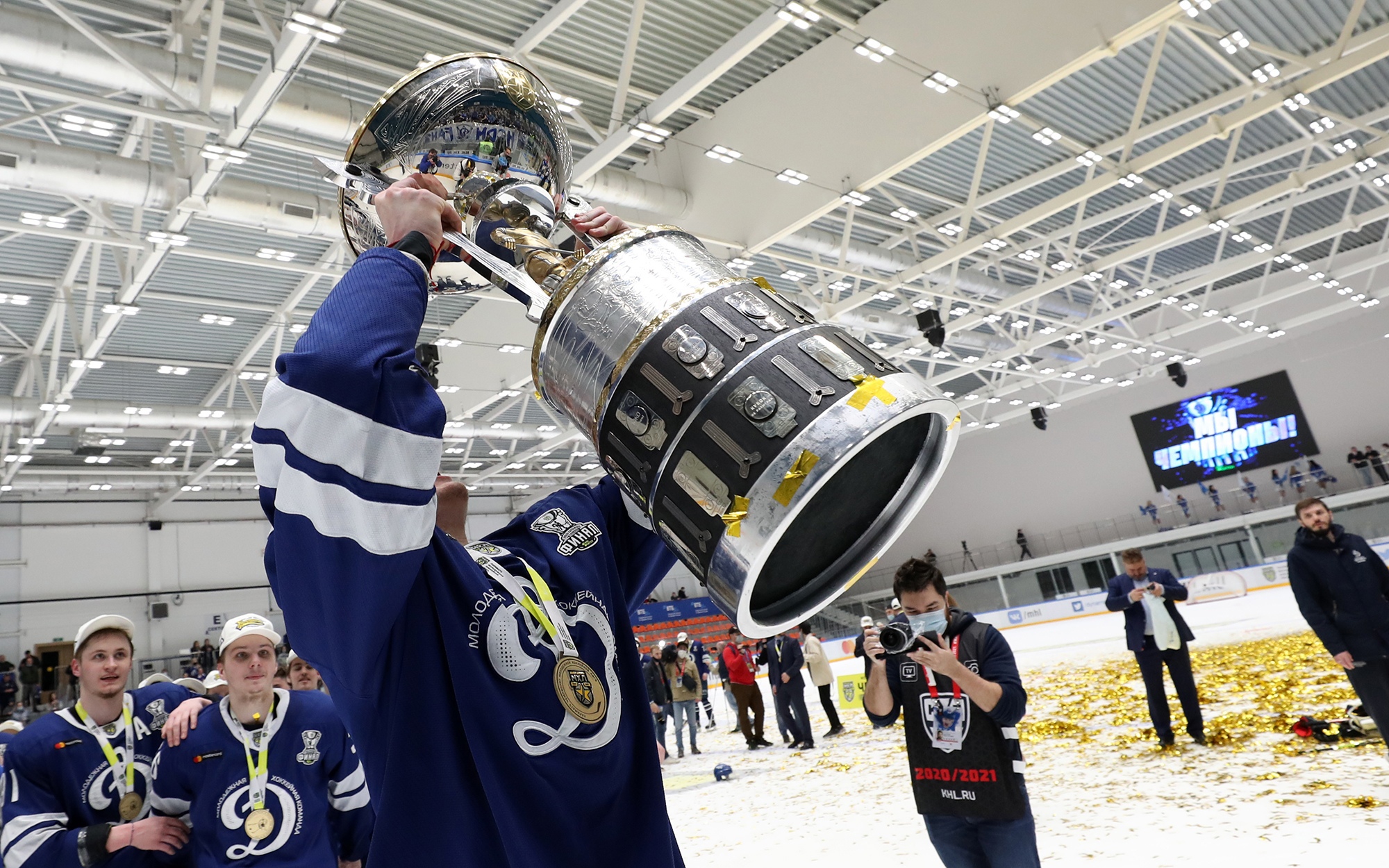 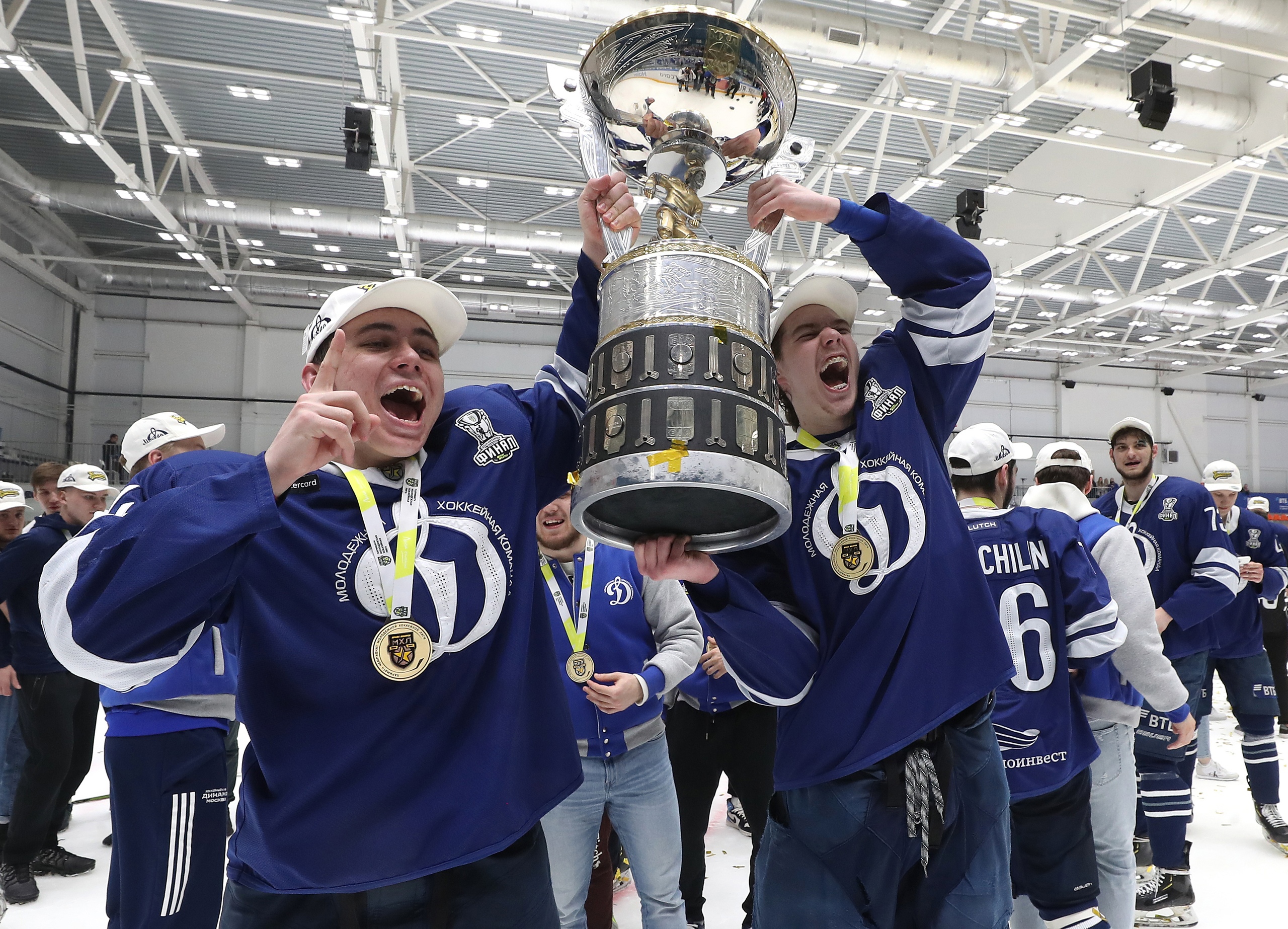 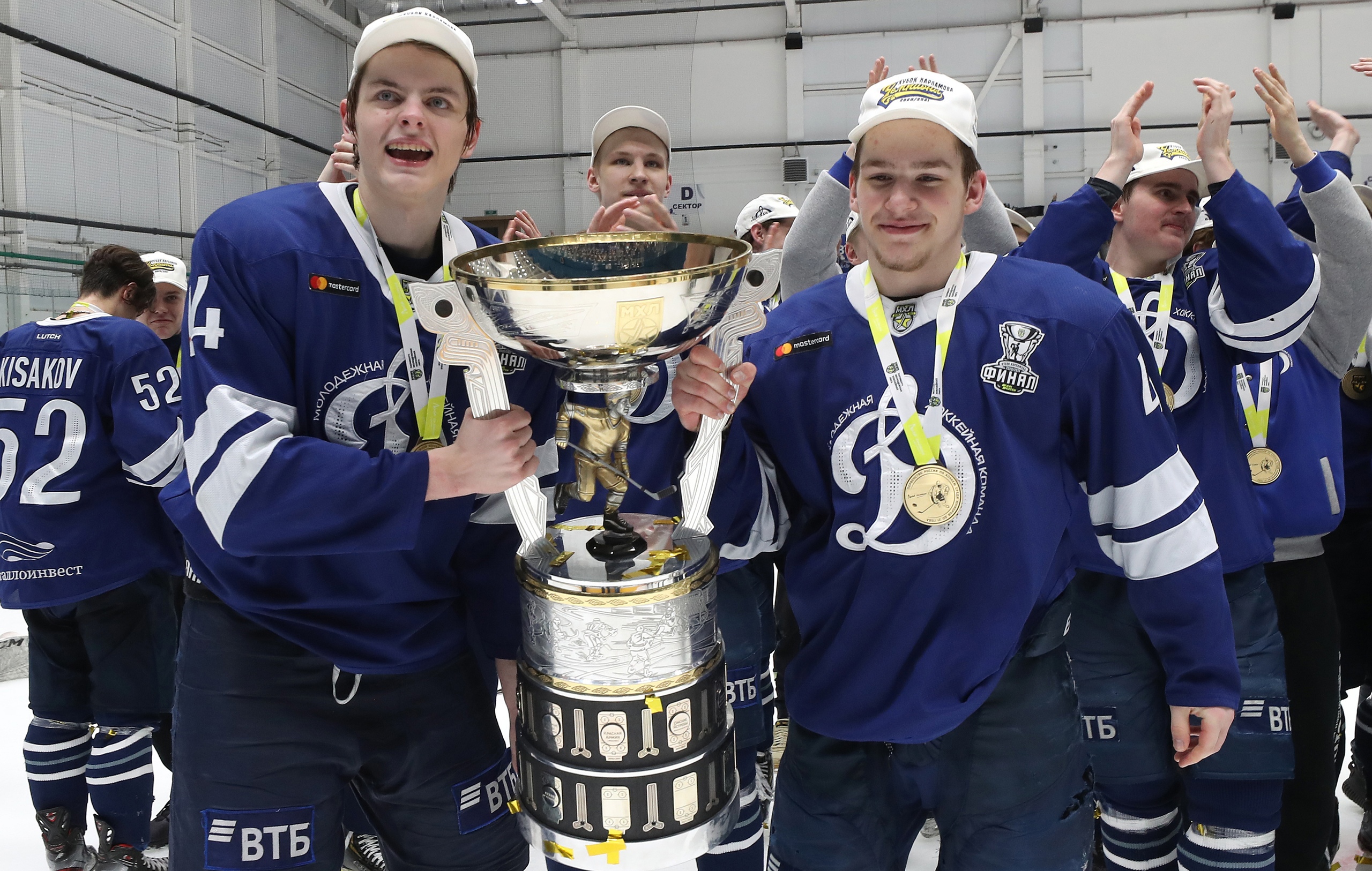 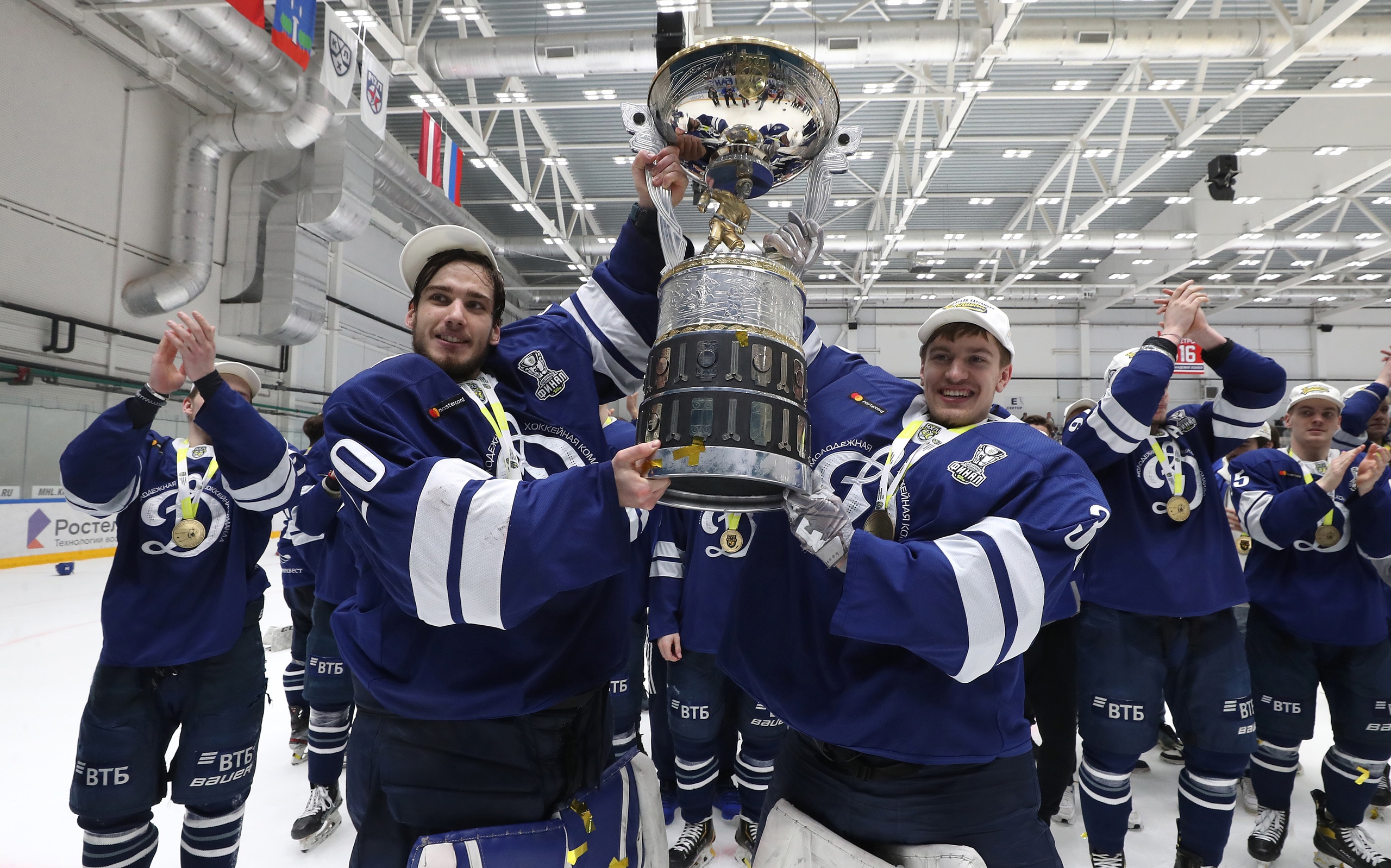 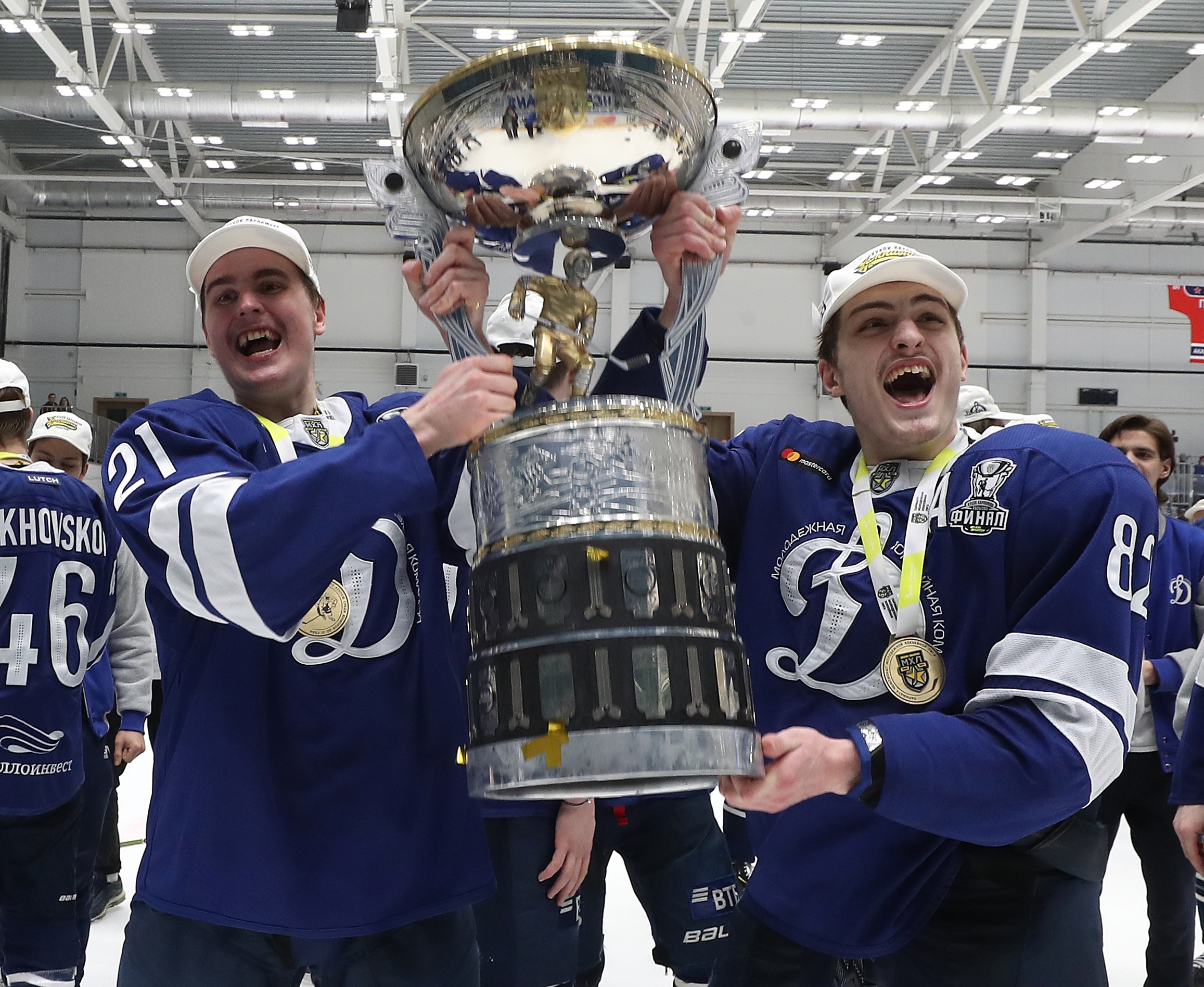 21-30. JHC Dynamo Moscow goaltender Vadim Zherenko is named the Most Valuable Player of the 2021 Kharlamov Cup Playoffs. Zherenko went on to stop 28 shots in Game 5. Overall the goaltender played 13 games in the post-season, winning 11 of them and earning a shutout.

21-23. JHC Dynamo Moscow beats Loko Yaroslavl 7-5 in Game 5 and wins the Kharlamov Cup. The blue-and-white lost just once in this playoff run. They lost Game 3 of the final series.