“In Junior Hockey League you can the game around in one shift”. How Dynamo watched Loko clinch a berth in the finals JHC Dynamo Msk
News
“The more you yell, the less they listen”. Yaroslav Lyuzenkov built a championship team, which had missed the playoffs for four straight years
“We got carried away and lost the momentum”. Miroshnichenko, Yurov and Leschyov comment on Team Russia’s first loss at U18 World Championship
“Plan B worked out”. Michkov, Chibrikov and Leschyov comment on Team Russia’s comeback against Team USA
JHC Dynamo Moscow wins Kharlamov Cup. Quotes from Krasnogorsk
“There was an offensive gesture from Dynamo’s side”. Loko comment on losing 4-1 and taking emotional penalties
“We are proud of our team”. Kazan managements weighs in on Irbis’ season
“What we saw wasn’t junior hockey but a men’s game with thought”. Kharlamov Cup Finals first games analysis
13 KHL players, shortened roster and focus on studying. HK Riga head-coach isn’t afraid of anything anymore
Playoffs
“In Junior Hockey League you can the game around in one shift”. How Dynamo watched Loko clinch a berth in the finals
Share

Following the game from Ufa

JHC Dynamo Moscow clinched a berth in the 2021 Kharlamov Cup Finals on April 7th beating Tolpar Ufa in Game 3 on the road. However, the team travelled back to Moscow only on the morning of April 9th. The series could have well gone to Game 4 – and it’s truly surprising that it didn’t – so it was impossible to plan the departure for an earlier date.

After beating Tolpar Moscow got a day off, which the players spent in Ufa. They got a chance to sleep in and subsequently spent their spare time in various ways. Some Dynamo players spent the day resting in their rooms. Some went out. Dynamo goaltender Vadim Zherenko, for instance, took a walk to Salavat Yulaev monument (Bashkortostan national hero, in case you don’t know) and landscaping park. Following that he joined some of his teammates in a movie theatre. After dinner – and, obviously, not just him – went to his room to watch the game between Irbis Kazan and Loko Yaroslavl. The latter managed to beat Irbis 7-6 in overtime, despite allowing six goals in the second period, and got a berth in Kharlamov Cup Finals. 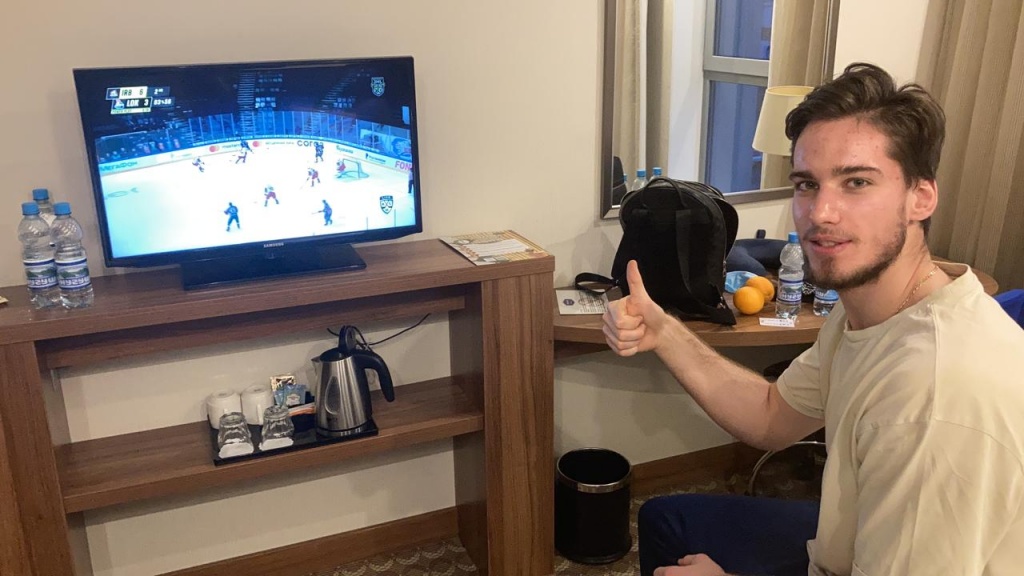 “I began watching the game starting from the second period. So I missed the most important part. It was a very exciting game,” says Zherenko. “Loko and Irbis both played well. Second period was insane. They were scoring goals almost every minute [combining for nine over the stretch]. On top of that each team had a chance to score two or three goals more but their goaltenders bailed them out.”

− Yaroslavl netminder Yegor Guskov got banged up in that game. What do you feel in such moments?
- Obviously, goaltender solidarity. It’s always sad and frustrating when any player – whether it’s your teammate or an opponent – gets injured. Hopefully, it’s nothing serious and Yegor is going to recover in time for the finals. You can’t avoid getting injured – hockey is a contact sport. It’s the forward’s job to crash the net and score goals. Whether they want or not, sometimes they crash into us and that leads to these unfortunate events. We do our best to avoid it but it doesn’t work all the time.

- Not everyone on your team watched the game, though?
- You get tired of hockey as well. As one coach once said, You have to think about hockey when you walk into the locker-room and forget about it when you leave it. You have to be able to clear your head off the ice.

- However, you decided not to follow the rule?
- I didn’t watch the whole game as I tuned in only in time for the second period. Obviously, we don’t have to watch the games of our opponents. We have a video coach on our team and he prepares highlight packs for every opponent, which are five or six minutes long.

- Did you watch the game as a fan or did you study your future opponent?
- Of course, as a fan. I know a lot of the players. I played with Irbis’ Artur Akhtyamov for Team Russia last year. He’s a great goaltender with great positioning, reaction and puck control. Actually, there are plenty of great and skilled players on Loko and Irbis. Stepan Nikulin, obviously, stands out. You start to study the game of such players as Nikulin and [Rodion] Amirov but when these forwards get creative, they can leave you no chance. As the matter of fact, there are a lot of players on Irbis and Loko who stand out – Artur Brovkin, Maxim Beryozkin… the list goes on and on.

JHC Dynamo Moscow head-coach Yaroslav Lyuzenkov watched the game between Irbis Kazan and Loko Yaroslavl in its entirety. The puckdrop coincided with team dinner – that’s where the smartphone and headphones came in handy. Moreover, the coach watched the previous game between the two teams, which was happening at the same time as Game 3 between Tolpar Ufa and Dynamo. Obviously, he didn’t watch it live but he caught it on tape in the morning of April 8th – the following day after the game.

“What a crazy intrigue there was. Loko seemed to have the momentum on their side at first but then Irbis led 5-2 and 6-3 – it was very emotional for Kazan. But you can turn the game around in one shift in Junior Hockey League. That’s what makes the league so exciting. Loko scored a goal and grabbed the momentum just like that. It was a very exciting game – I watched it full and skipped the KHL game [as SKA St. Petersburg faced CSKA Moscow at the time the puck dropped in overtime].

− Did you watch it for fun or studied the opposition for the finals?
- Both. Obviously, I analyzed the game of both teams on a power play, penalty kill and so on. I watched a replay of their previous game, which was happening at the same time as our game in Ufa. I woke up the next day and watched it. Obviously, I put more emphasis on studying Irbis because we know Loko better.

- Insider Alexei Shevchenko declared Loko to have the best roster in Junior Hockey League and mentioned the team came in second place in the regular season because they lost focus. What is your take on that?
- I believe, there are no favorites in the playoffs. There are no weak teams – especially starting from the second round – in Kharlamov Cup Playoffs. Yaroslavl have a great junior hockey school and they system works well. They get new players every year who are very motivated. Besides, they have that winning mentality – it was evident in their last game in Kazan. Shevchenko is right in that regard. But I wouldn’t go as far as calling Loko the favorites. Look at the semifinals – yes, we did win the series 3-0 but it was a very tough battle.