“It’s been a while since anyone came back from being down 2-0. It’s time to fix it!”. Tolpar is ready to salvage the series against Dynamo Tolpar
News
“The more you yell, the less they listen”. Yaroslav Lyuzenkov built a championship team, which had missed the playoffs for four straight years
“We got carried away and lost the momentum”. Miroshnichenko, Yurov and Leschyov comment on Team Russia’s first loss at U18 World Championship
“Plan B worked out”. Michkov, Chibrikov and Leschyov comment on Team Russia’s comeback against Team USA
JHC Dynamo Moscow wins Kharlamov Cup. Quotes from Krasnogorsk
“There was an offensive gesture from Dynamo’s side”. Loko comment on losing 4-1 and taking emotional penalties
“We are proud of our team”. Kazan managements weighs in on Irbis’ season
“What we saw wasn’t junior hockey but a men’s game with thought”. Kharlamov Cup Finals first games analysis
13 KHL players, shortened roster and focus on studying. HK Riga head-coach isn’t afraid of anything anymore
Playoffs
Interview
“It’s been a while since anyone came back from being down 2-0. It’s time to fix it!”. Tolpar is ready to salvage the series against Dynamo
Share

After two games Tolpar [Ufa] is down 2-0 in the series against [JHC] Dynamo Moscow. Ufa lost Game 1 in regulation – 4-1. We managed to take Game 2 to the shootout but Moscow had the upper in that one as well – 4-3.

Ufa has one last chance to salvage the series – next game will take place at our home arena on April 7th. Prior to the game we spoke to Tolpar captain, defenseman Pavel Yelizarov, about what didn’t work out for his team in the previous games and what mindset does Ufa have going into Game 3.

– What expectations did you have coming into the series against Dynamo?
- We eagerly waited for it because we never played against Western Conference teams. It was excited to see with our own eyes the regular season champion. As the matter of fact, they lived up to our expectations. Dynamo is a skilled team with good skaters. They control the puck well and have excellent power play special teams. They have four even lines and many players with KHL and VHL experience. They are exactly the way we thought of them. The opposition didn’t have any surprises for us. Our coaching staff studied how the play at certain patches of the ice. Our preparation was fundamental. We’re going into the next games revved up to the max.

- How would you compare Dynamo’s level to that of Eastern Conference teams?
- Dynamo is a bit stronger but I’m not saying that it’s better than Tolpar (smiles). It’s a series between two evenly matched teams. Perhaps, their roster is a bit more even than ours. But for the most part they like to play with the puck just as we do and create lots of scoring chances. It’s just that sometimes we convert poorly on ours.

- Why did Dynamo completely outplay Tolpar in Game 1?
- Perhaps, just because they have a bit of an older team. We have some guys who have never played at this level and at such arenas. After all, we have a lot of rookies on our team this season. But personally it didn’t affect me. I didn’t pay attention to any of that. On the contrary, it’s great to play in this ambience. As our head-coach said, Game 1 was about reconnaissance.

- What happened in Game 2? Why did you lose again?
- We had a good first period in that game, I believe. I reckon we dominated in that frame. We could have scored more than just one goal but that’s where that conversion rate comes into play again. I would say that the game was even early in the second period as well. And then we ran into a penalty problem. Dynamo converted on a power play. In the next shift they scored another goal. Their third goal was a fluke – we scored on our own goal. These events tightened us up a bit. We just had the lead and now we find ourselves down 3-1. Dynamo, on the other hand, gained confidence. After that the opposition locked us in our zone for three and a half minutes – they had three shifts, while we had none. We managed to pull through and scored a goal off a quick transition play. After that, I would say, that perhaps it was us who had the momentum.

- You stayed out of the penalty box for 110 minutes until second period of Game 2 against Dynamo. Is that something you worked on or just a coincidence?
- I wouldn’t say it was our game plan or anything but prior to every shift we’re asked not to take foolish penalties. Special teams matter a lot in the playoffs. If you exclude penalty killing, you have more chances to win. 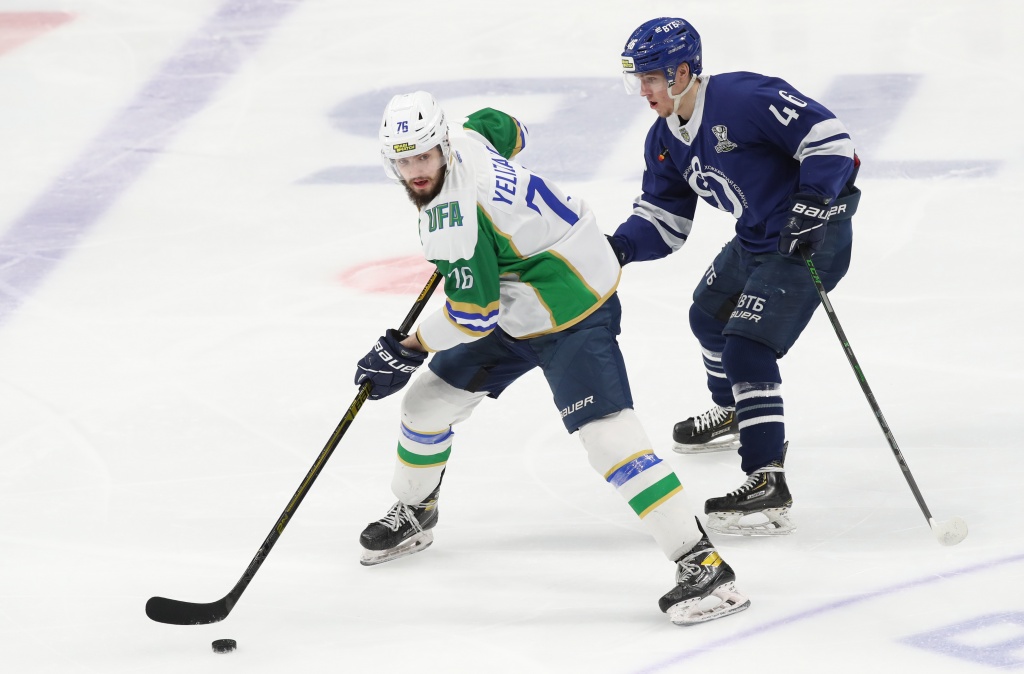 - But after getting a penalty you allowed three goals in six minutes.
- That’s how big of a factor penalties are (laughs). Maybe we shot ourselves in the foot by getting in the lead because everyone wanted to get revenge. And then we got the penalty. They tied it up 1-1 and we allowed a couple more goals. The boys were crest-fallen a bit but later on we found a way to even it up. We were just a tad unlucky.

- Both team played with a lot of caution in overtime. Was it the right choice of tactics on your part?
- I wouldn’t say we played with ‘a lot of caution’. It’s jus that everyone realized that if you get too deep into the offensive end, the opposition would have a great chance for a transition play. And the price of mistake was very high.

– How did you feel after losing Game 2 – emptiness or, on the contrary, had a reason to believe in yourself?
- Actually, we left a lot of energy and emotions in Game, hoping to get a win. It wasn’t the greatest feeling in the world, to be honest. Perhaps, there was a bit of a void because it was very frustrating. Oh well. As they say, you die only when you get to the third loss.

- You have a way of rallying your team up. Did you have to energize your teammates in the series?
- I don’t have to boost anyone. Everyone understands everything. It would be very frustrating to get eliminated in the semifinals. Everyone pumps himself up by himself. Everyone knows about the responsibility and gives everything he’s got.

- How did Rodion Amirov and Danil Bashkirov adjust to the team?
- There was no need for them to adjust. They are simple guys just like us (laughs). Maybe it’s difficult for them to play the whole game right now because they weren’t getting as much ice-time on the KHL team. But still they created a goal in each of the games in the series.

- What needs to happen so that Tolpar would make it to Kharlamov Cup Finals?
- We have to win three games (smiles). How do we do it? We need to play the right way, convert on our scoring chances and play solid defense.

- What are the atmosphere in the locker-room and mindset of your team like right now?
- It’s fine. No one is giving up. As they say, we write our own history. I believe, no one has every came back from being down 2-0 in the series, right? It’s time to fix that.