Back to the list
News
“It’s been a while since anyone came back from being down 2-0. It’s time to fix it!”. Tolpar is ready to salvage the series against Dynamo
“They want to make pretty plays, that’s where mistakes stem from”. Dynamo and Tolpar went to the shootout
“There’s too much attention on these two players!”. Amirov and Bashkirov can’t help Tolpar
“The boys thought they had it secured when they were up 2-0”. Irbis almost salvaged Game 2 in Yaroslavl
Dynamo vs. Tolpar, Loko vs. Irbis. Kharlamov Cup Semifinals schedule
“No one gets far in the playoffs without luck”. Dynamo Moscow proceeds to Kharlamov Cup Semifinals
“Amirov and Bashkirov gave confidence to the others”. Tolpar didn’t break after falling 8-2 and made it to semifinal round
“There will be another chance to compete for the Kharlamov Cup. U18 World Championship is a once in a lifetime opportunity”. Team Russia impacts JHL playoffs
JHC DYNAMO ST. PETERSBURG, ATLANT WIN AND CLINCH LAST PLAYOFF BERTHS. MARCH 3RD ROUND-UP
Share

Ten regular season games took place in Parimatch Junior Hockey League on March 3rd. As many as five teams saw their regular season come to a close. On top of that, top team of the Eastern Conference had a chance to be determined this Wednesday as well as all Kharlamov Cup Playoffs participants. We take a closer look at key action in this daily review on JHL official website. 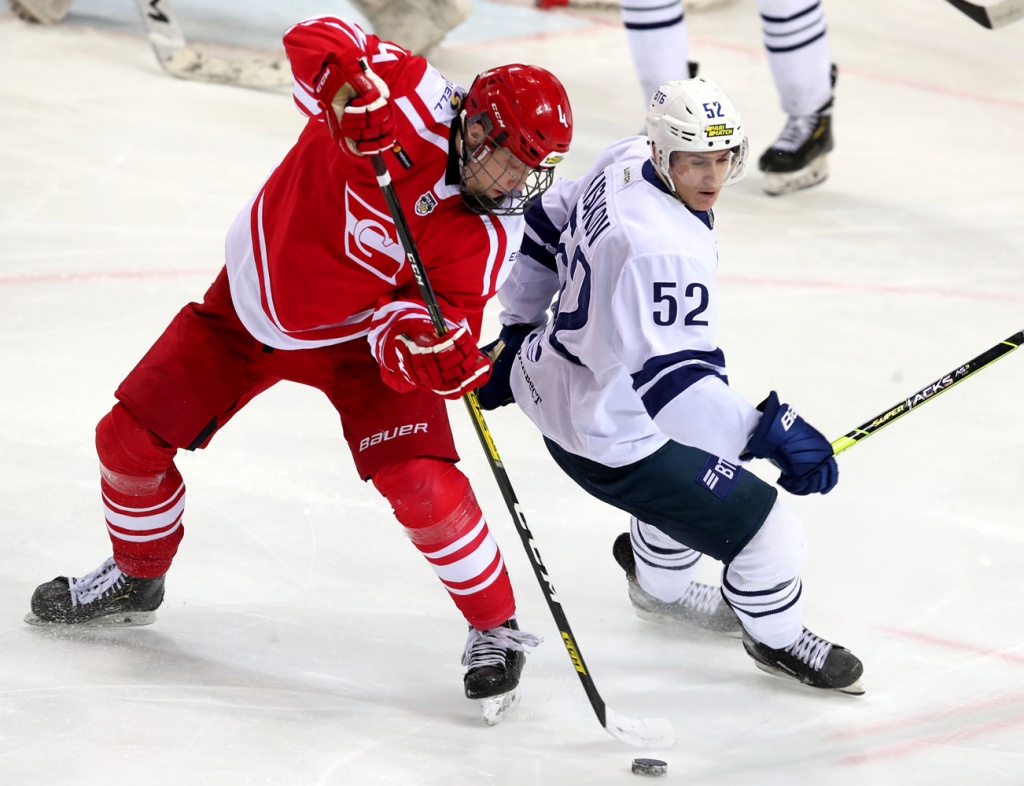 JHC Dynamo Moscow got reinforcements from their VHL team going into the game against their rivals JHC Spartak Moscow. The blue-and-white couldn’t get past the opening round of Petrov Cup Playoffs and finished their season. Yaroslav Lyuzenkov’s men were joined namely by Oleg Gofman and Maxim Makhrin, who leads the team in assists and is second in Junior Hockey League in that statistical category.

The visitors got off to a decent start. Just 65 seconds into the game Dynamo already had a 2-goal advantage. 49 seconds into the opening period of action Bogdan Trineyev put his team on the board and 15 seconds after that Nikita Lukhovsky doubled the lead for the blue-and-white. The visitors totally dominated on the ice. Dynamo goaltender Maxim Motorygin had to stop just two shots in the frame, while his counterpart Maxim Kulikov faced 21.

Spartak began the second period with a power play opportunity. It took the red-and-white just 35 seconds to capitalize on it. Former Dynamo player Dmitry Romko made an excellent pass to Matvei Kokovin, who put his team on the board. That was Spartak’s just third shot of the game. The visitors couldn’t stay out of the penalty box. Dynamo found themselves in a 3-on-5 situation midway through the period. The hosts failed to convert on the 2-man advantage but they did score once Dynamo got their fourth man back out on the ice. Ruslan Novruzov slammed it home on the short-side.

The red-and-white also did well early in the third frame. Three minutes after the second intermission Kirill Tagirov wristed it home under the glove of Maxim Motorygin and gave Spartak their first lead of the game. Having found themselves down by a goal, Dynamo grabbed the momentum and gradually began spending more time in the offensive zone. They got what they wanted only with 55 seconds remaining on the clock. Alexander Kisakov, who leads the blue-and-white in points and goals, salvaged the game and forced overtime. The fate of the game was decided in the extra period as Yegor Maklozyan won it for Spartak. The red-and-white enjoy a 4-3 win in a hard-fought game and clinched a place among the Top-4 teams of the Western Conference, which means they will have the home-ice advantage in the opening round of the playoffs. Dynamo gain one point and still have a shot at catching up to Loko and finishing the regular season as the top team of the West.

Pochivalov locks first place in the East for Chayka 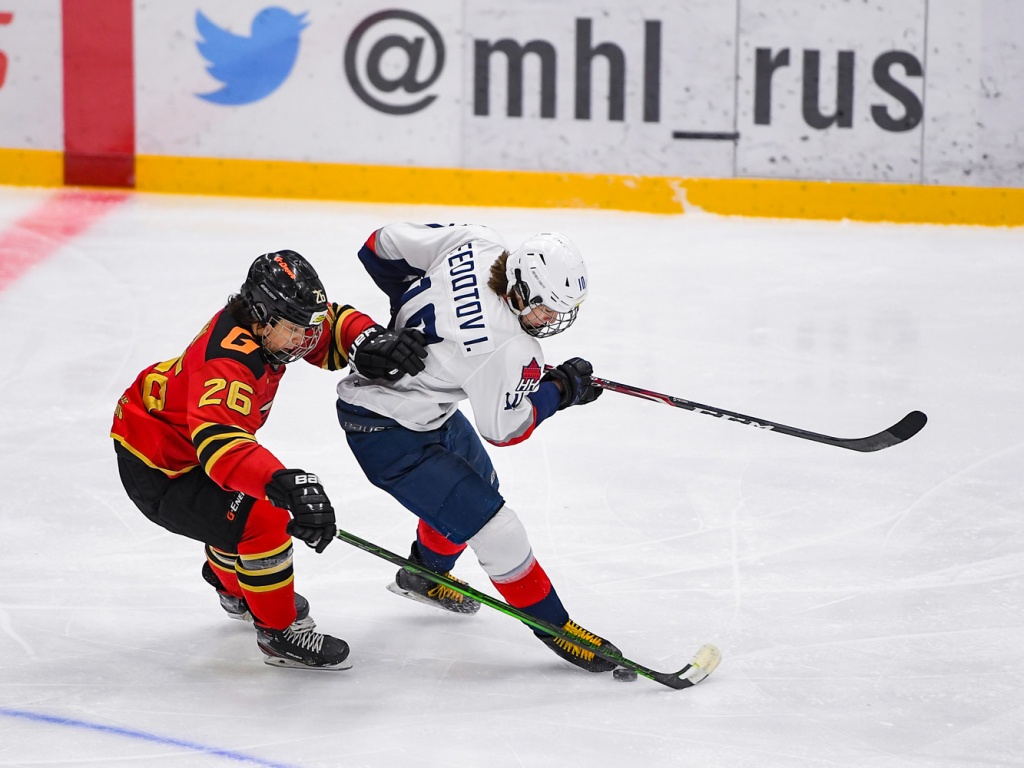 The game between Omskie Yastreby and Chayka Nizhny Novgorod didn’t mean anything for the hosts, who have lost every hope of making the playoffs this year in their previous game. As for Chayka, they eyed to clinch the top spot of the Eastern Conference in regular season standings.

First goal of the bout came only within the final five minute of regulation. The game was slowly winding down and seemed to be going to overtime when Nizhny Novgorod took a penalty. Omskie Yastreby made a mistake on the ensuing power play and let Denis Pochivalov skate in on a breakaway against Andrei Mishurov. The former didn’t let the chance go to waste – 1-0. The hosts spent the remainder of the period on the offense, setting shop in Chayka territory. The ‘Hawks’ had a great chance to get the equalizer but their forward couldn’t tap it home past Yegor Gromovik. Top forward of the previous week Nikita Shavin scored the empty-netter with two seconds remaining on the clock to set the final score. Chayka Nizhny Novgorod win 2-0 on the road and for the first time in franchise history finish the regular season on top of the Eastern Conference.

Irbis win in Novosibirsk, rise to second place in the East again 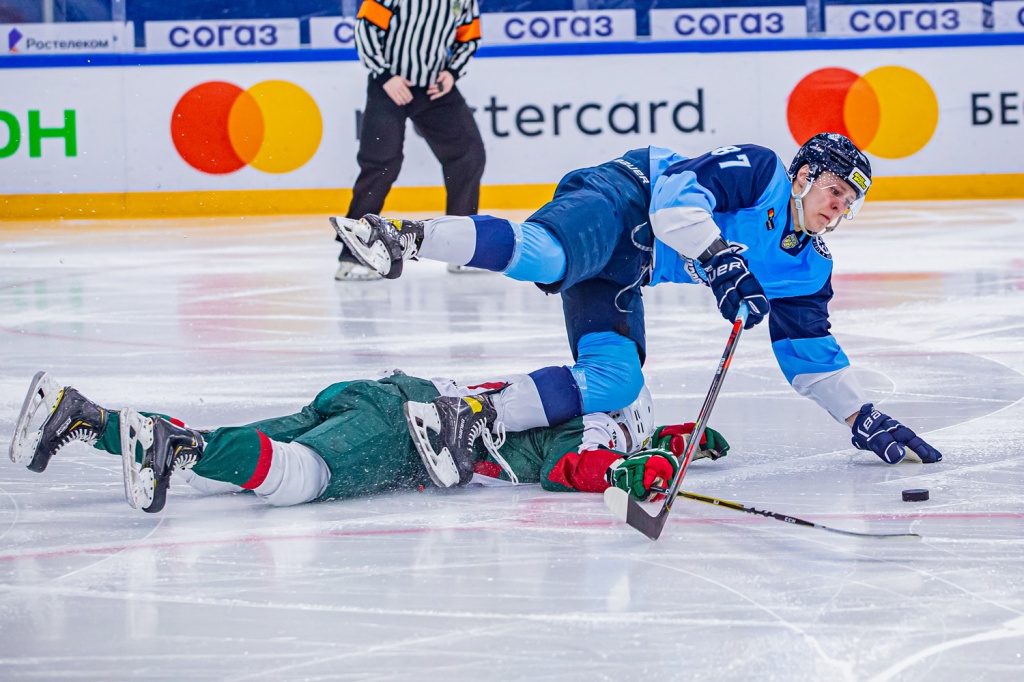 Sibirskie Snaipery faced off against Irbis Kazan on home ice. The latter went into the game still competing with Chayka Nizhny Novgorod for the top place in the Eastern Conference. Kazan had to win in Novosibirsk and hope for Nizhny Novgorod to lose their game in Omsk. The visitors fulfilled their part of the bargain. They couldn’t convert on Sibirskie Snaipery’s initial penalty of the game but late in the opening period of action Daniil Chetverikov did score on the second man-advantage. Early in the second period the visitors got a penalty shot called against them and Sergei Dubakin converted on the attempt. Midway through the stanza Savely Kuvardin made Novosibirsk pay for another penalty but the hosts got back even just five minutes later – Ivan Buts made it a 2-2 hockey game.

Third period of play featured two evenly matched teams but Kazan did better at capitalizing on their scoring chances. Semyon Terekhov gave the visitors their lead of the game and Ruslan Galimzyanov added a security marker. Oleg Orekhovsky pulled Sibirskie Snaipery back to within one late in regulation but that was as close as the hosts could get. Irbis win 4-3 on the road but the success didn’t let them continue their pursuit of the top place in the Eastern Conference. However, Kazan did edge Belye Medvedi Chelyabinsk for second place. 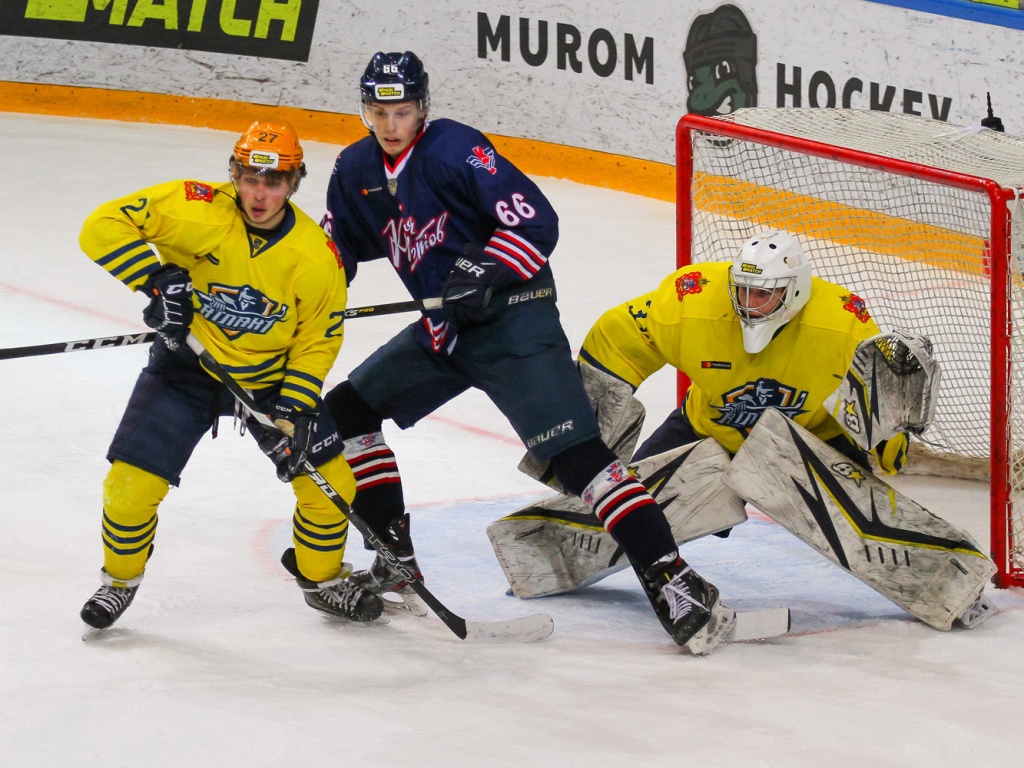 Krylia Sovetov Moscow had another must-win game against JHC Atlant Moscow Region in Setun. The day before ‘Soviet Wings’ managed to win in hard-fought fashion. Mytischi eyed to clinch playoff spot in the Western Conference with a win for the first time in six years. The visitors were the ones who opened up the scoring once again as they hit the twine late in the first period of action. The teams exchanged penalties in a short period of time and when Moscow Region got their fifth man back out of the box, Semyon Kareyev hit the target off assists by Nikita Miller and Vadim Zakharov. Early in the second frame Mytischi got a minor penalty for too many men on the ice, killed it off, skated down the ice for lightning-quick transition play and Rais Shafeyev finished it off. Krylia Sovetov coaching staff called timeout but turning things around proved to be difficult as the visitors were in the zone and were on the verge of improving their lead.

Late in regulation Pavel Zubchinsky gave Krylia Sovetov fans some home as he pulled his team back to within one – Vitaly Lebyodkin and Artyom Didkovsky picked up assists on the play. In the dying seconds of the period the hosts pulled their goaltender for the extra attacker but to no avail. Artyom Kanayev sent the puck into the yawning net from his defensive end to put an end to ‘Soviet Wings’ playoff hopes. JHC Atlant Moscow make will go to the post-season for the first time in six years.